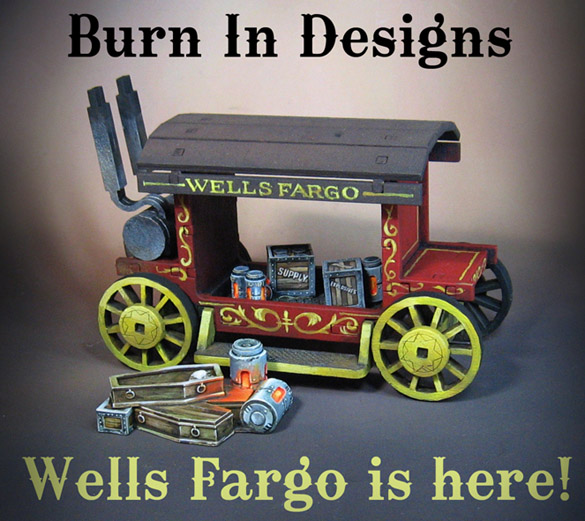 This little self propelled wagon from Burn In Designs will be hauling some very valuable cargo into Wappelville today. 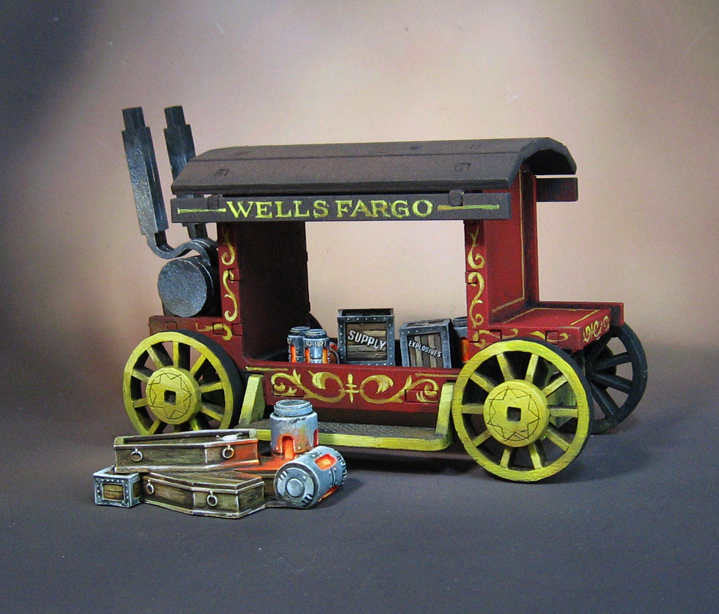 Somehow I thought that it might be fun to look up some pictures of Wells Fargo wagons of the period and paint this up in that color scheme. 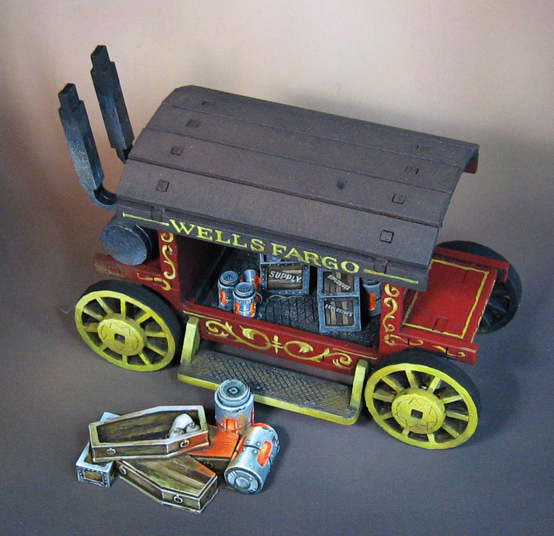 Such a valuable cargo deserves a significant escort! 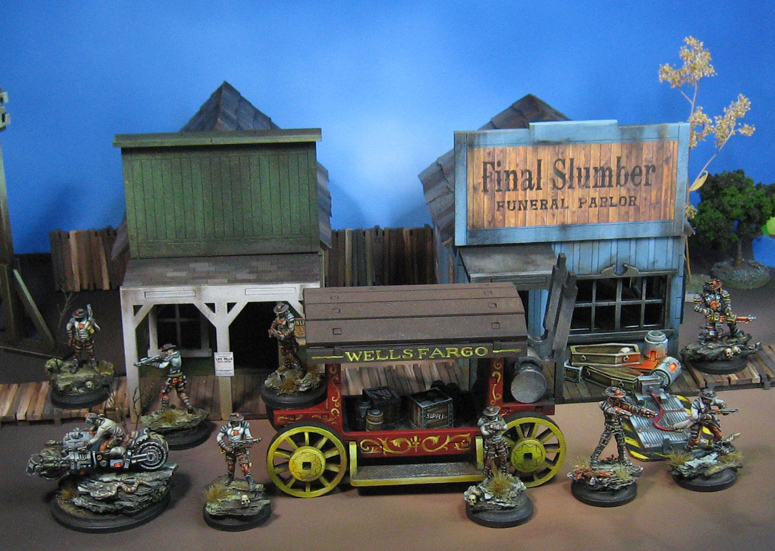 Looks like it has dropped off the new caskets at the Final Slumber funeral parlor. 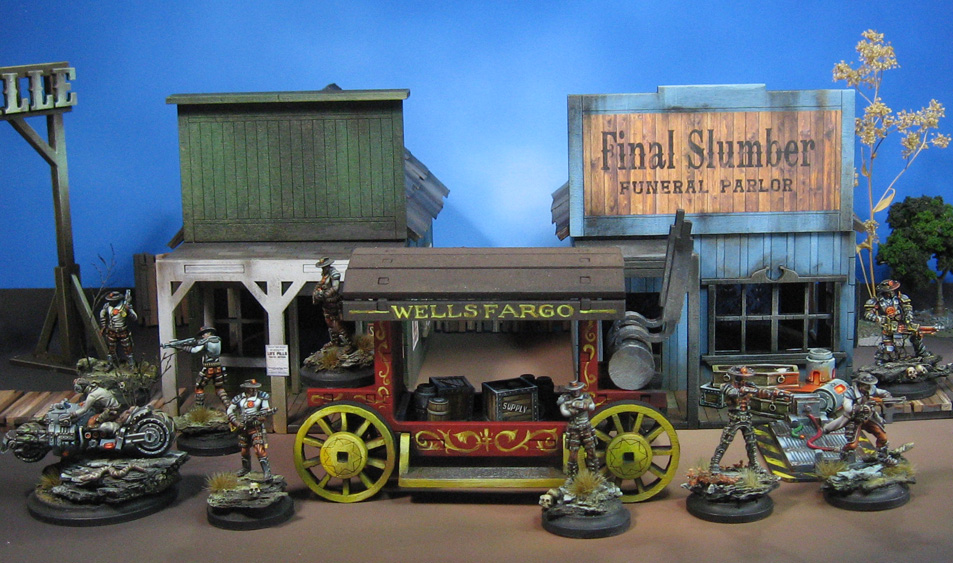 An Interceptor leads the way, making sure the street is clear of Jesse and Carpathian's minions. 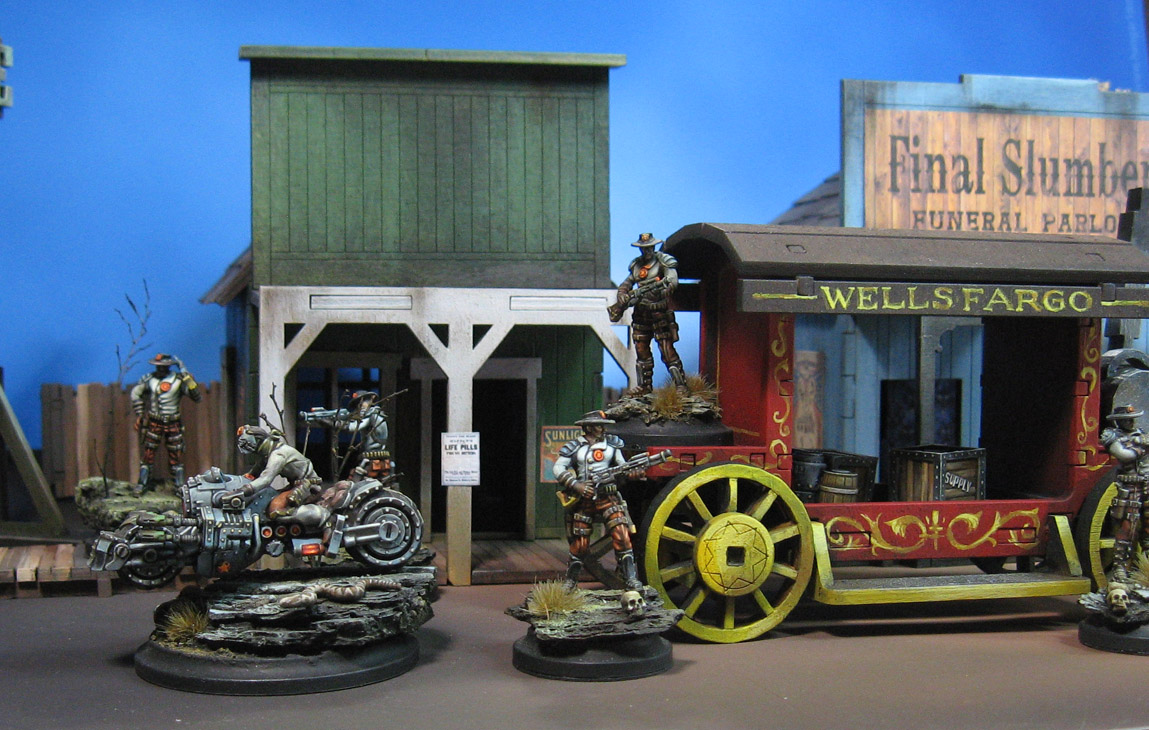 Even a UR-30 Lawbot is prepared to protect and defend this delivery. 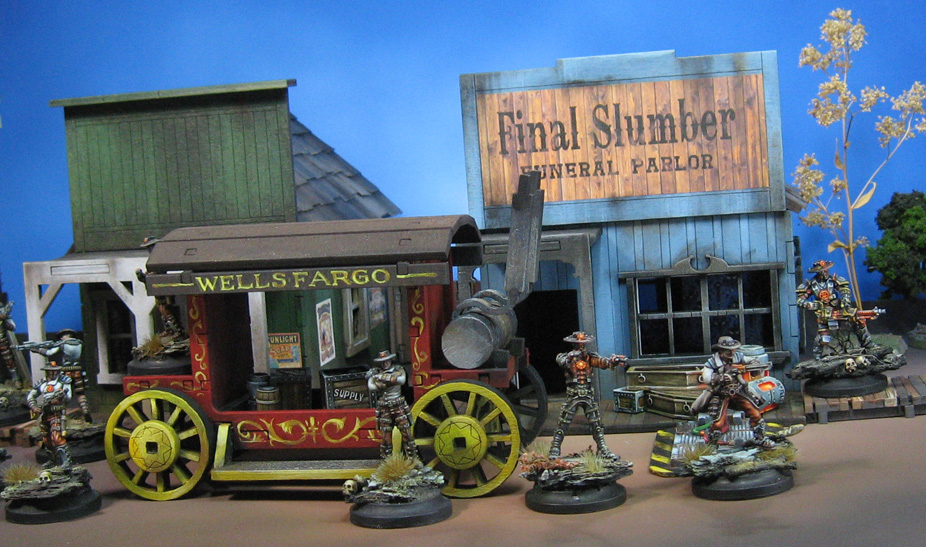 Another delivery is being made at the General Store, a one stop shopping bonanza out West. 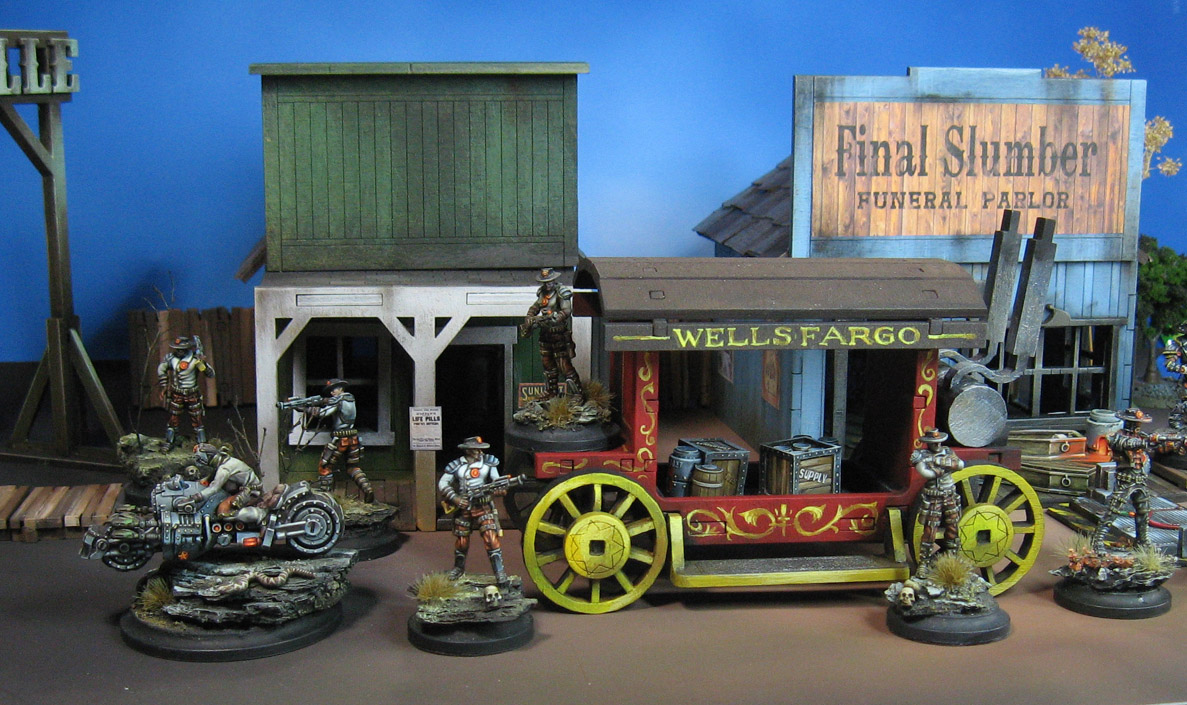 Will there be more gunplay on the streets of Wappelville? 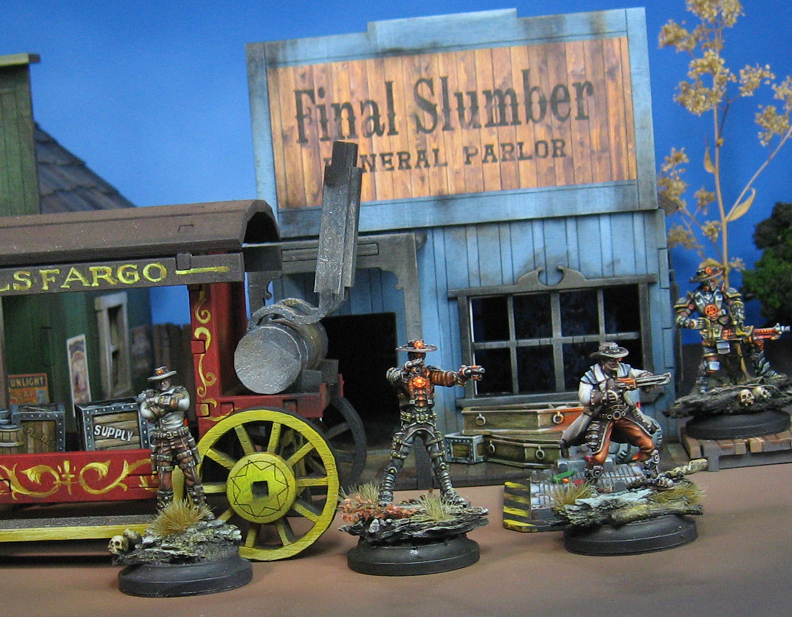 Stay tuned... rumor has it that Carpathian intends to hijack this shipment and carry it off to Payson. 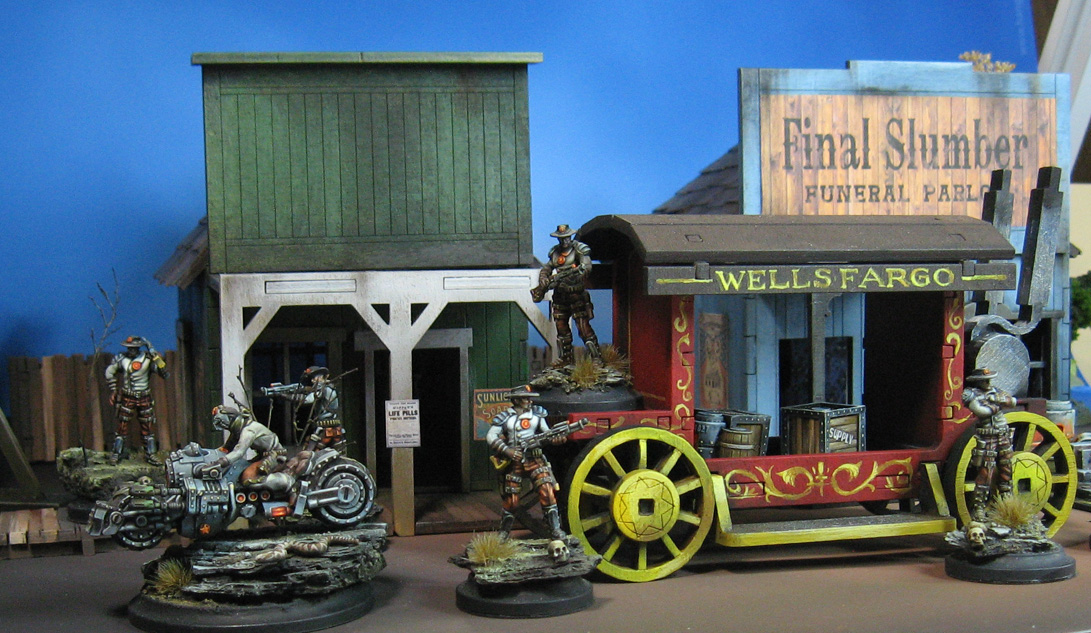 Posted by wappellious at 4:58 PM No comments:

Playing in the sand 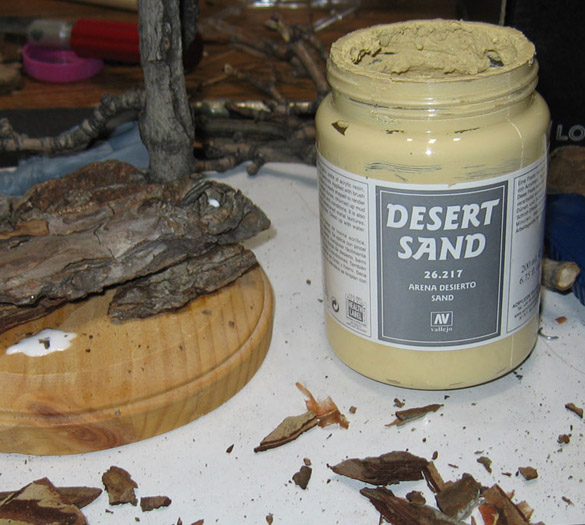 Continuing with the massive Scale 75 diorama, it's time to start adding some trees.  This means I will put a paper clip in the bottom of my carefully selected tree branch so that it is easier to anchor in the bark and base. 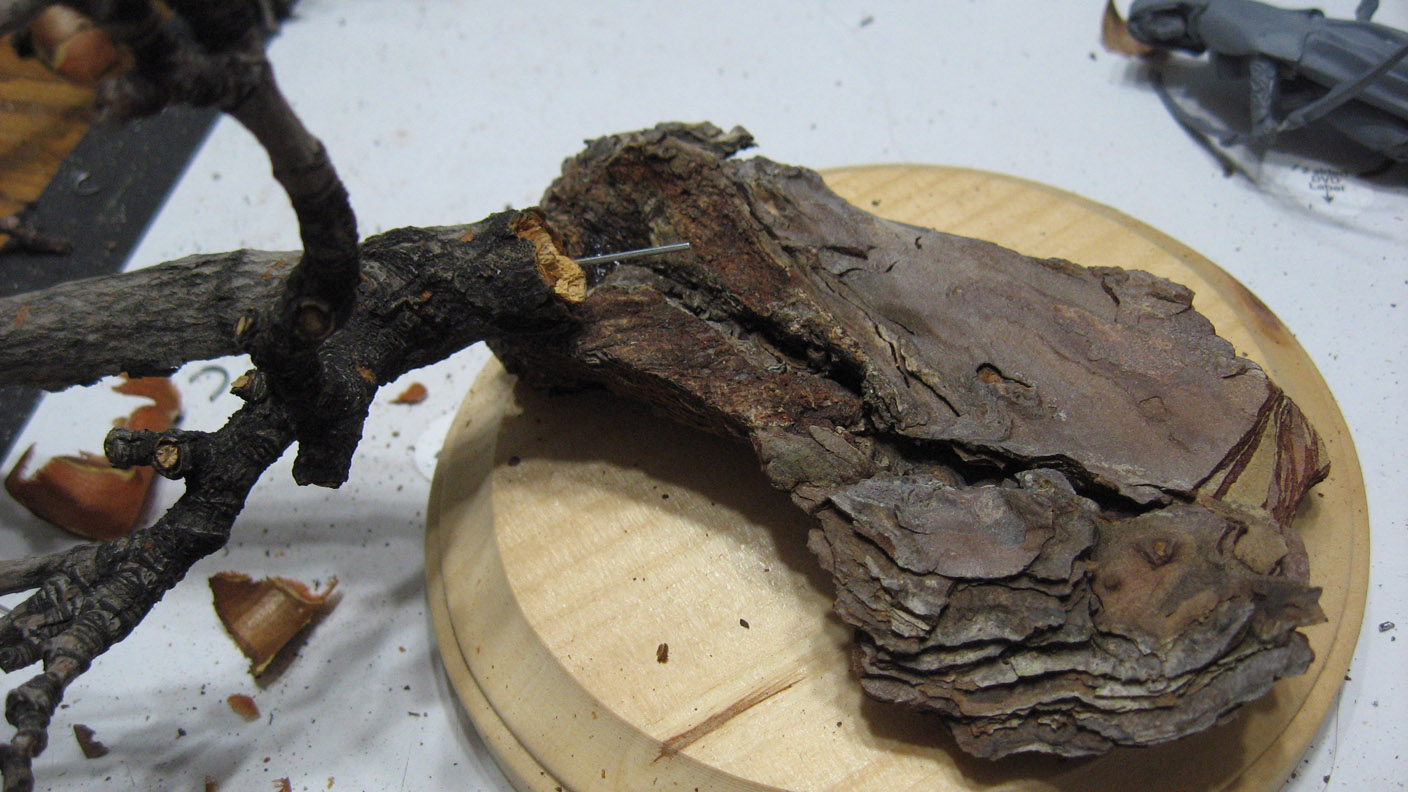 I really wanted that branch to hang over what will be water.  That took some manipulation of its positioning, but well worth the effort! 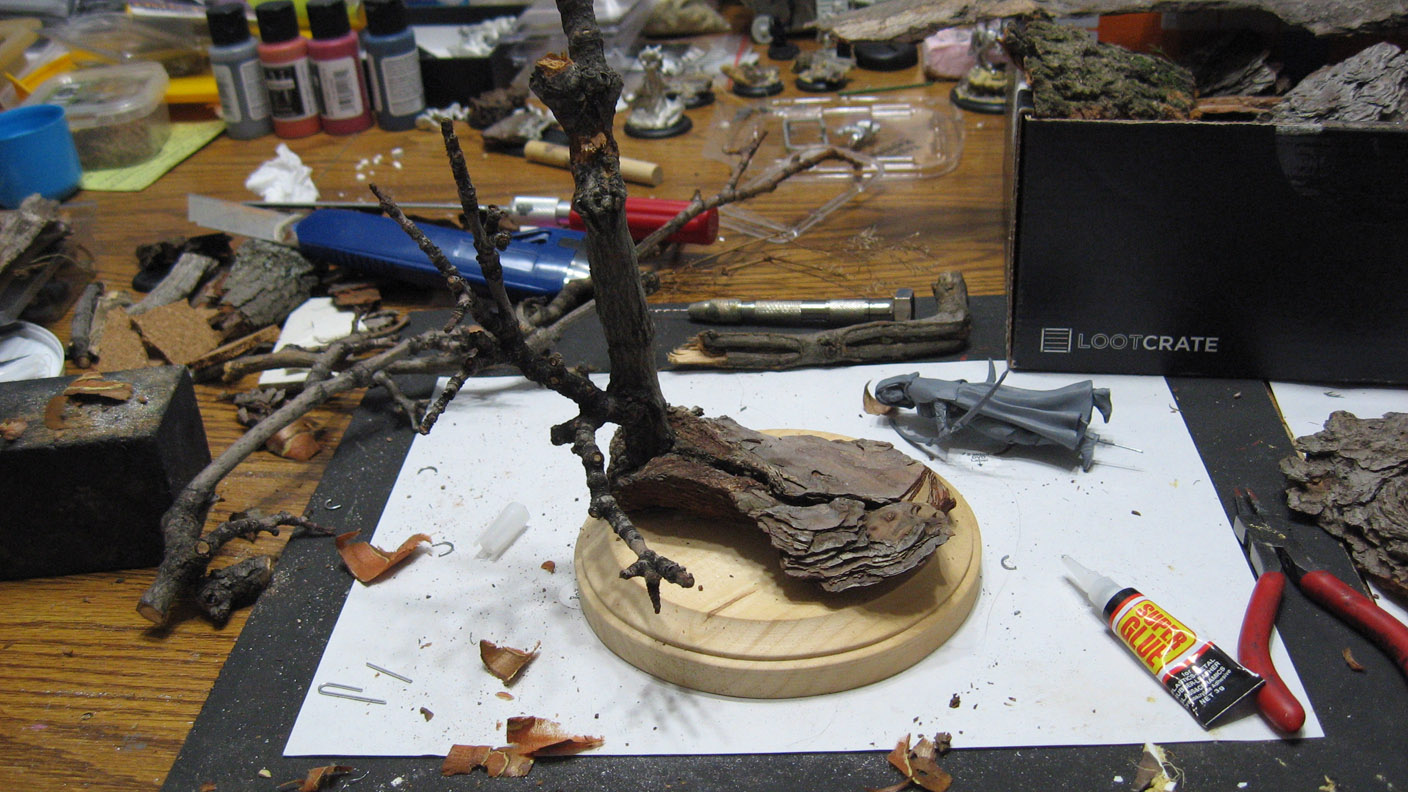 On the 'back' side of the diorama, I decided to fill in some of those gaps with additional pieces of bark texture.  I had to shave these down in order to make them fit. 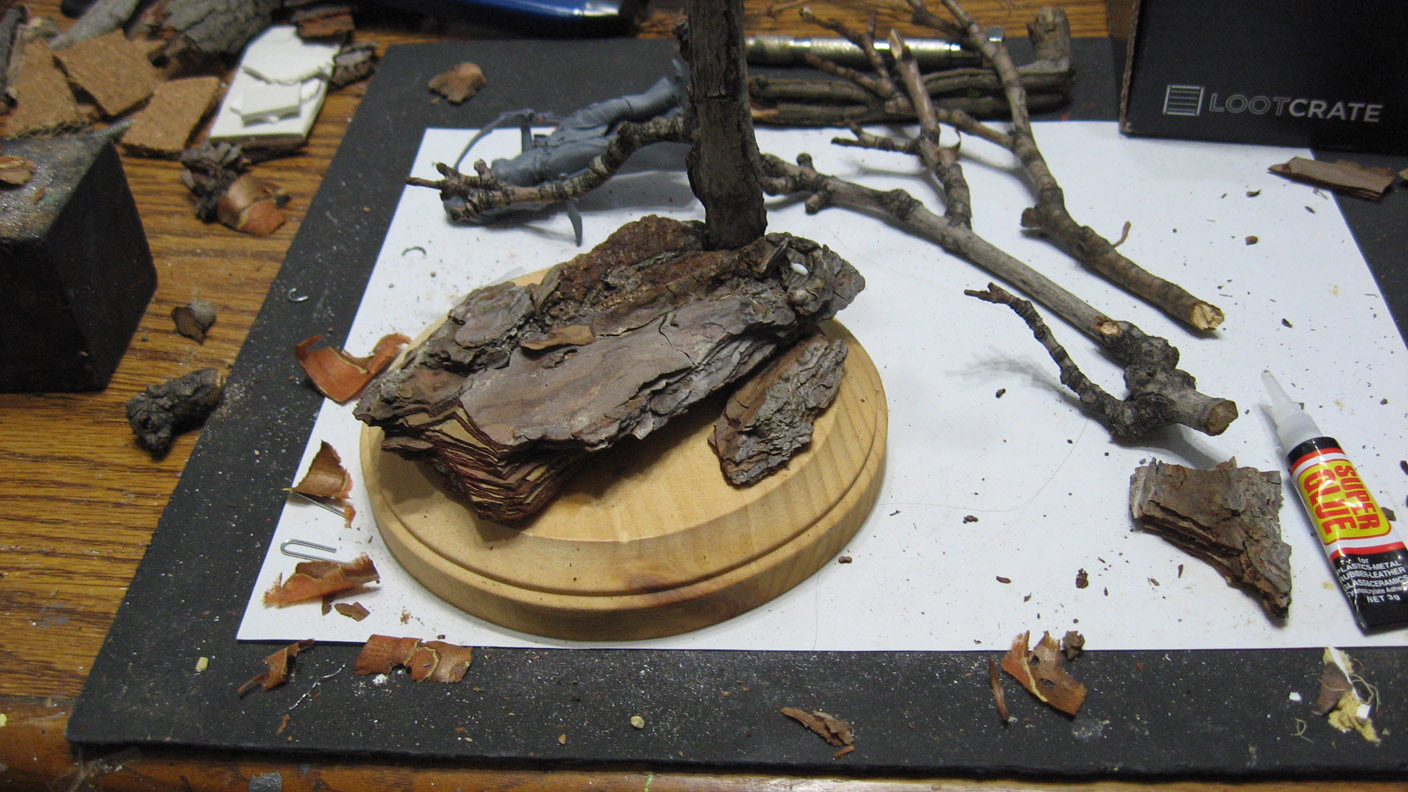 This is the mortar for the entire construct.  Along with super glue, I add plenty of this material in between the layers.  It fills those gaps, and helps to lock those layers in place. 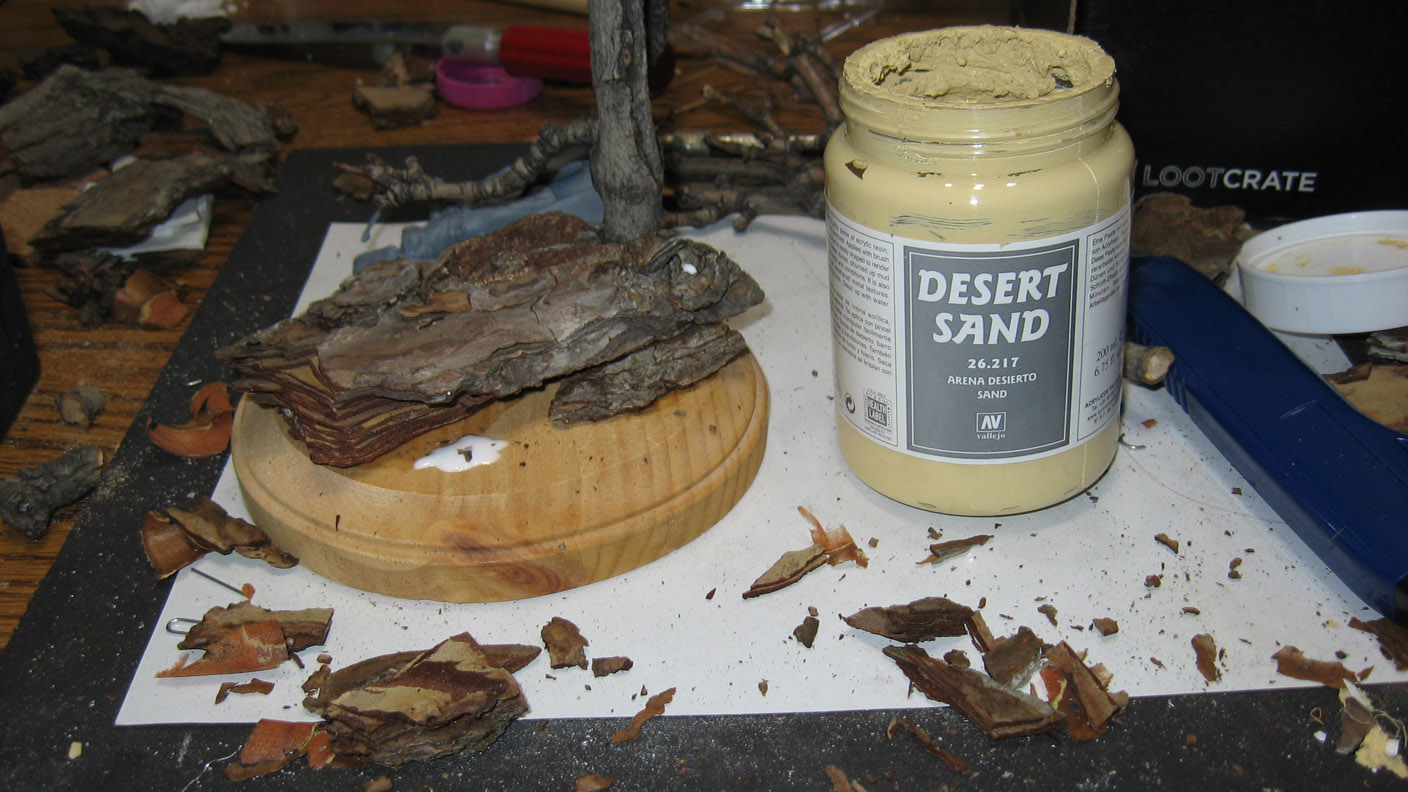 Here's an image of that process.  Once the piece is where I want, I can work the extra paste material to look like sand, or even sculpt it a bit to resemble the additional pieces. 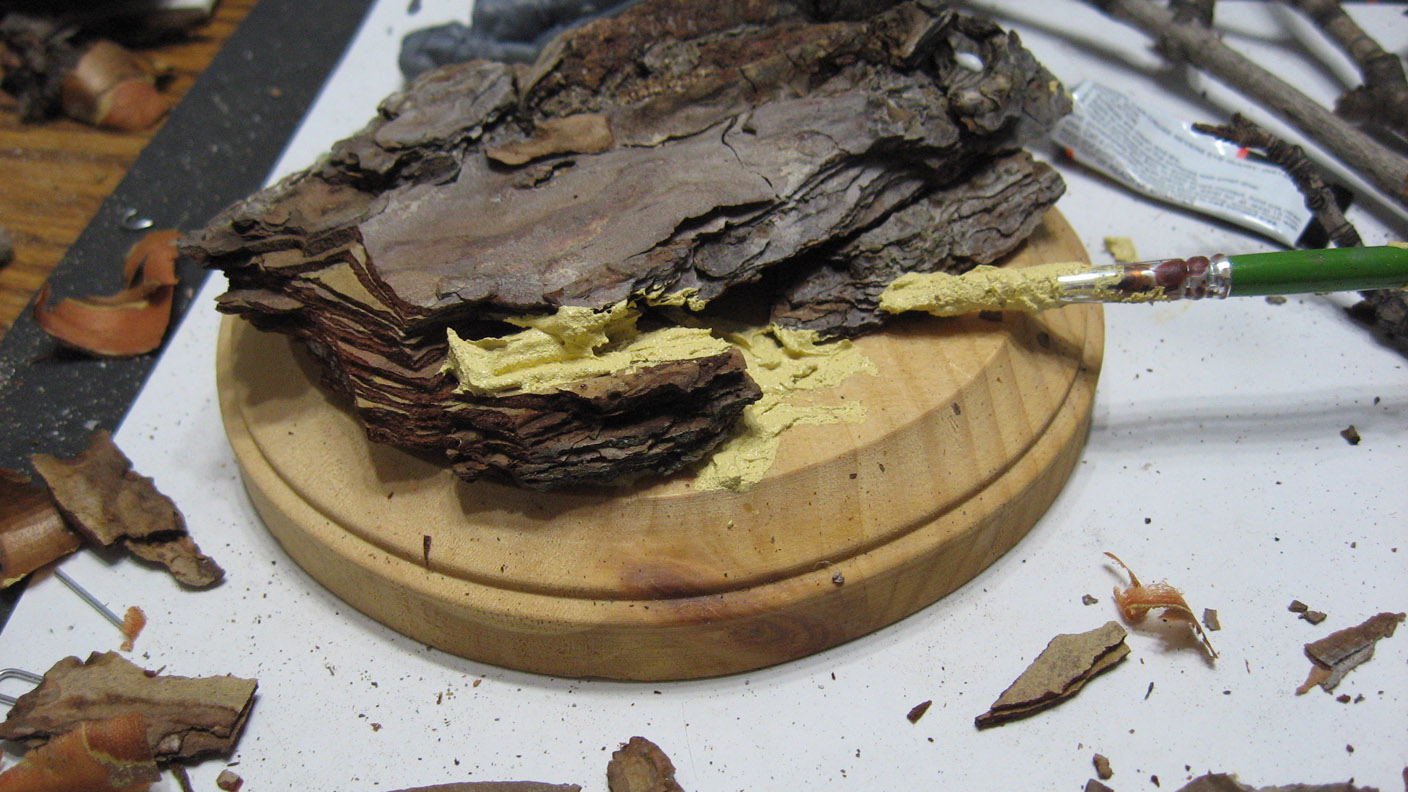 This broken stump was melded into the original branch by using that same sand paste to mimic bark. 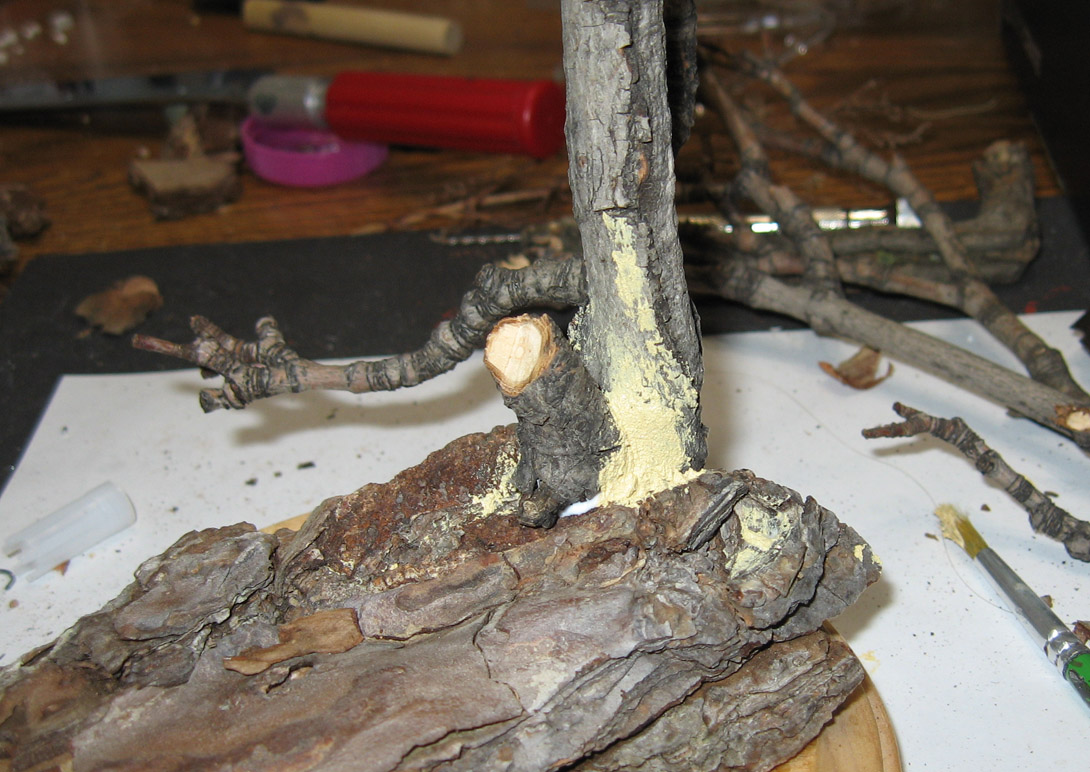 In order to have that desired "composition triangle" of three differently sized and shaped trees, I added two more to the back of the diorama.  This would be a 'curtain' behind the figure. 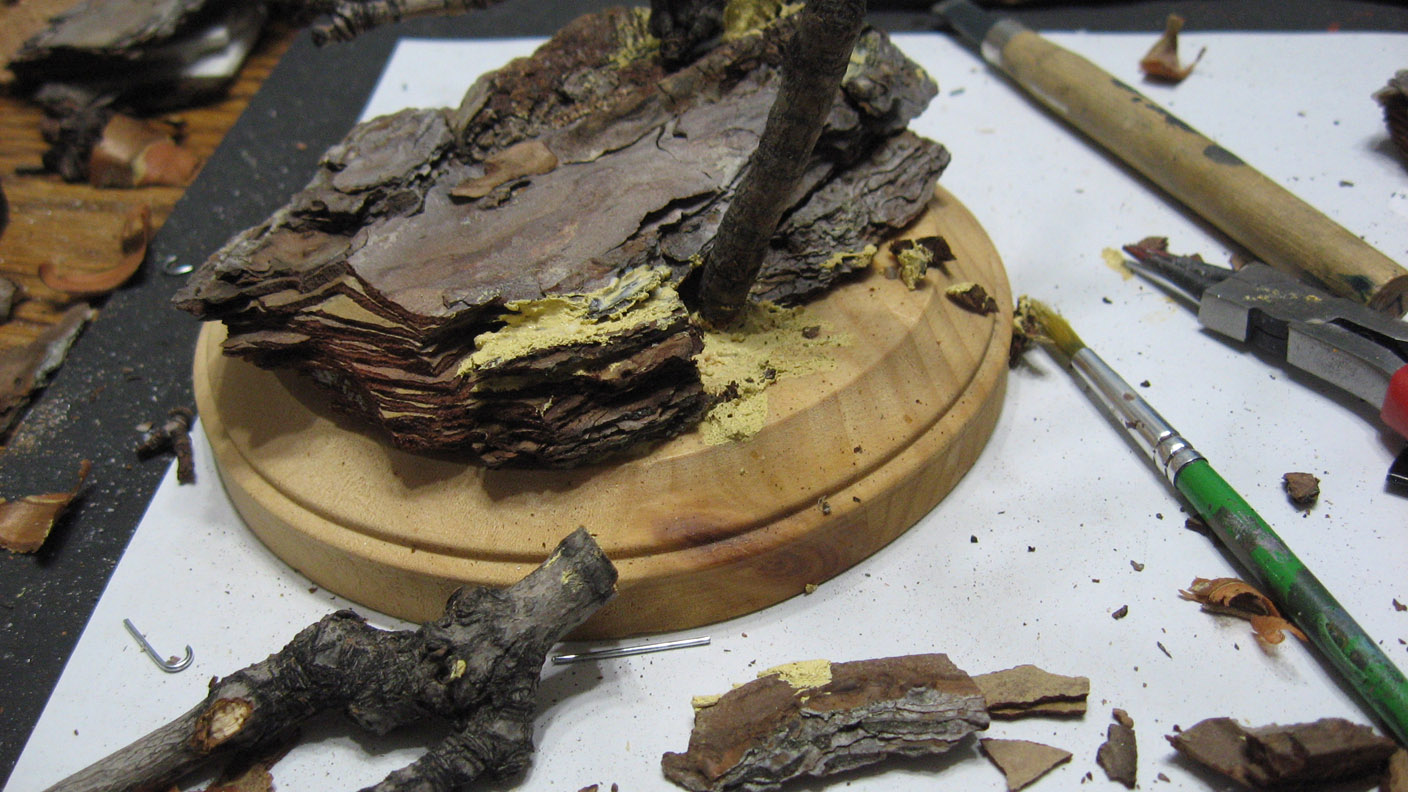 The other two trees are now pinned and in position! 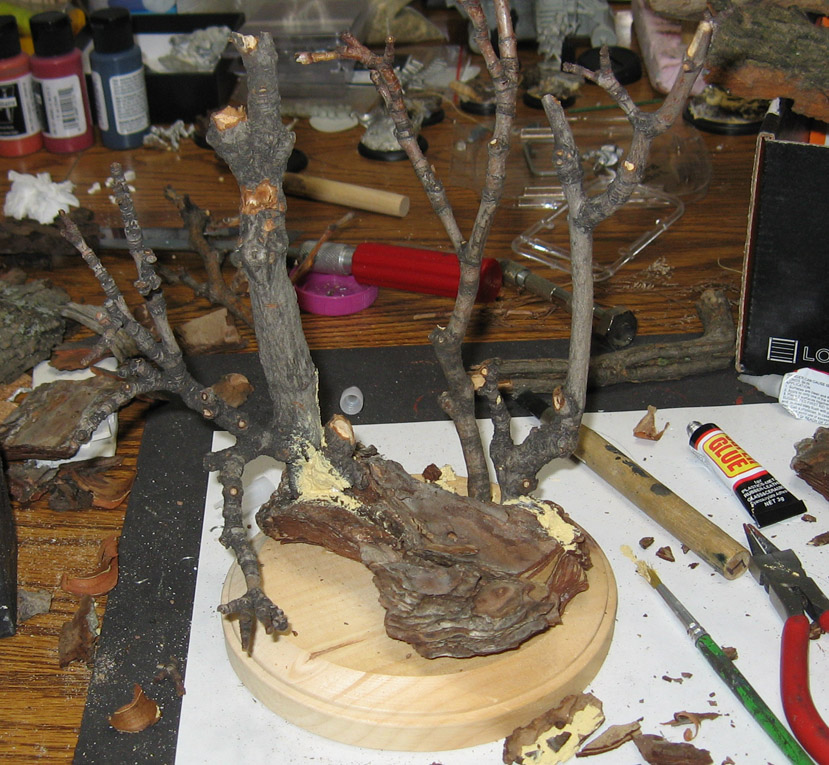 Now for some gravel, including the fine medium and heavy ballast.

I always put down the heaviest first, and the fine sand last.

More of the finer foliage branches will be added as this base moves along.  These branches are dried foliage from Michael's art store.

I waited for all of this ti set up, and then began to add more items.  Stay tuned for the next episode!! 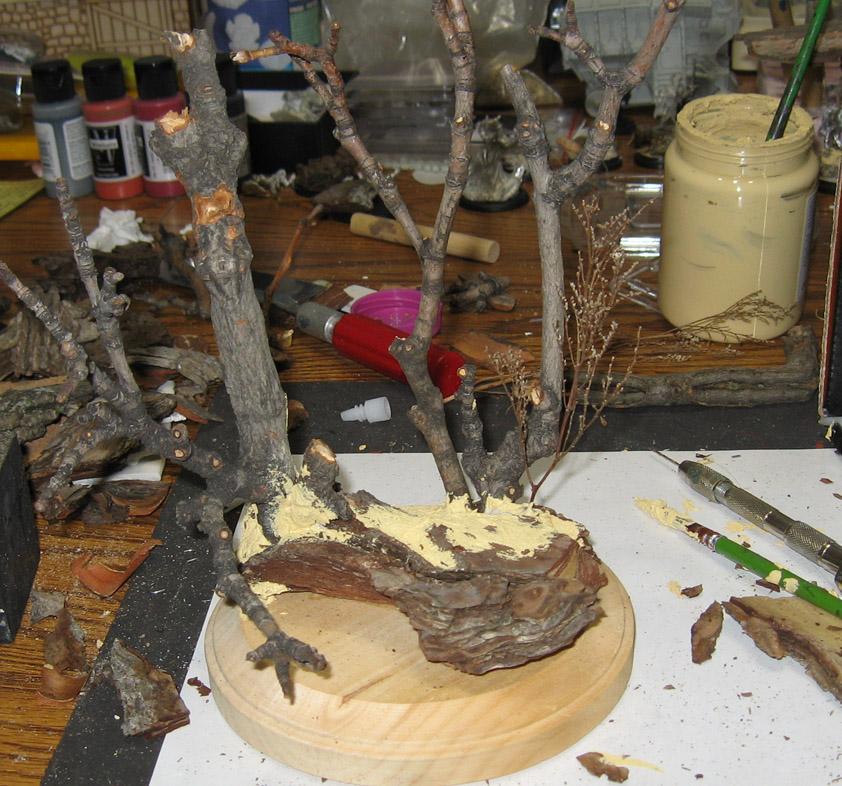