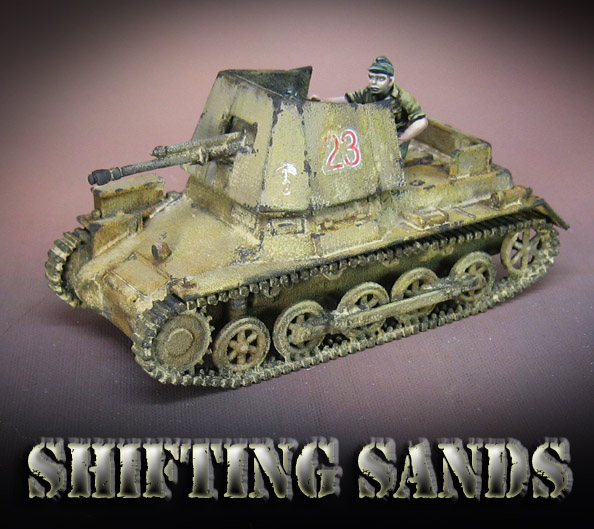 Not all of the early war Shapeways 3D printed vehicles are meant for France!  A few of them are designed for our North Africa campaigns, as is this Panzerjager 1.

Here's a link to the original unboxings, so that you can get a sens of what it looked like prior to painting.  All I did was wash it in warm soapy water, which is what I do for any kind of resin kits.

It was very easy to paint, and it held the primer and subsequent layers of paints very well.  I used the Badger Airbush Stynlrez primer, followed by a series of Secret Weapon paints.

Those acrylic paints are designed for various weathering techniques. Each color is designed to remain cohesive, even when thinned down.  They also dry quite flat or matte, which is another advantage when you need to get weathering effects which dry quickly!

The crew figures are from Perry Brothers, part of set of five.  I chose the two that would fit with this kit the best, and gave them an appropriate Afrika Korps look.  I really enjoyed having the crew inside the fighting compartment, giving the vehicle more of an active feel.

I had a limited time to work on this, so I didn't get a chance to put much stowage on it, or create some live ammo to place on the insides of the gun shield.  However, I did use my weathering powder/rubbing alcohol combinations to make the dusting effects.

The idea is to 'liquify" the powder with the alcohol, making it easier to get it to settle into the crevices. Dampened makeup sponges can be used to remove the excess powder, and restore the original colors.

Here's a link to the "painting with powders" facebook live episode:

I look forward to painting several more of these Afrika Korps vehicles, along with my Italians!  The infantry will also be interesting, after painting so many early war German Heer in green :-)

Posted by wappellious at 9:52 AM 2 comments: