Some Angron management...painting work in progress 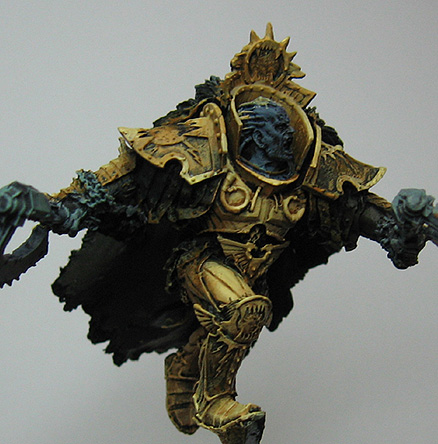 As we waited all day to hear from the mechanics at the garage (still waiting, so no word until Friday, I guess) I ramped up the work on the Forgewprld Angron set.  I had been working on the other parts for 2-3 days, but I wanted to concentrate the photos on Angron himself.

This is a gold recipe that I have not used in a long time.  It is modified a bit, but it should still be fun!  It is based on snakebite leather.  There are some Vallejo colors I have been using for the last year or two for this purpose, but I wanted to give this a try. :-)

You can see the snakebite leather (mixed with some very dark brown) applied across every gold surface.

Working with my usual shaded basecoat technique, I thought about how I would get to my lighter colors.

This view of my temporary palette gives you a sense of the plan... I wanted a cooler light on the left, and a slightly warmer light on the right.  The warmer colors will generally be facing upwards, and the cooler shades towards the ground. 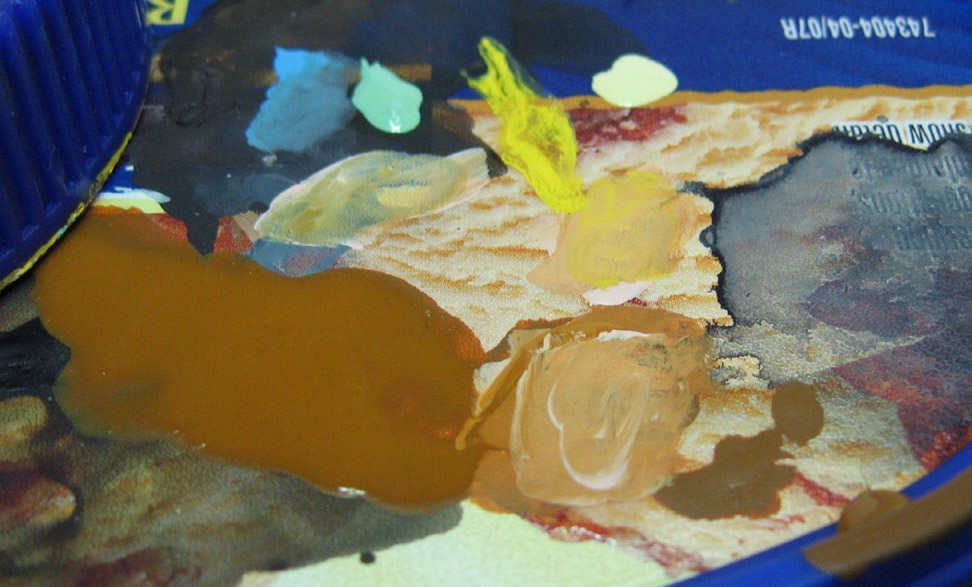 Those warmer tones are mixed in with my lights on the sky facing surfaces... 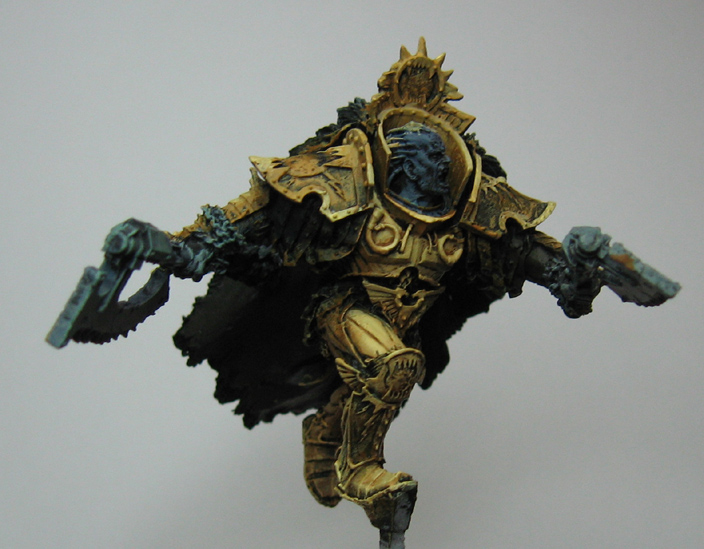 And the cooler lights towards the ground.

To make sure I don't end up with an 'orphan color", that light color is also applied to the fur cape.

The skulls get more of a red, so that they separate a bit from everything else. 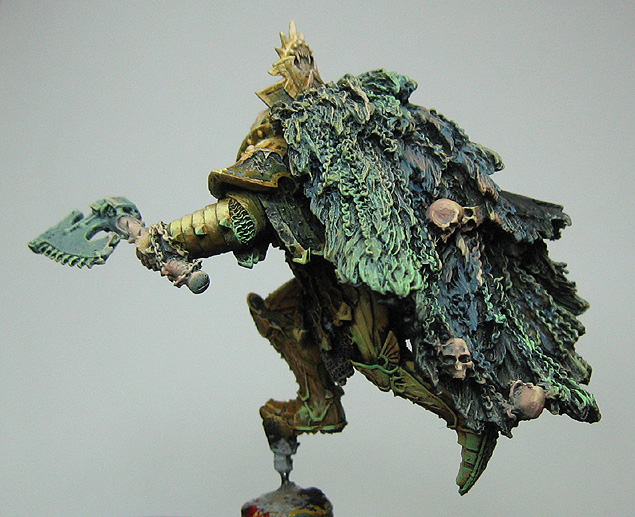 A bit of that tone is used on the face.  Later tonight I will have another post to show the progression of the lightest highlights.  Then it will be time for glazing and tinting fun!!!

Posted by wappellious at 7:11 PM 4 comments:

Incubating the Incubi... primed and ready 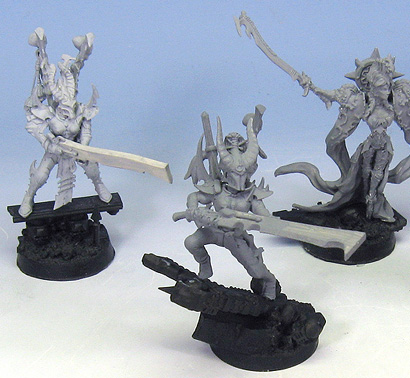 A little bit of primer in between several other tasks today.  It is really nice to see the converted Incubi all one color!  I am looking forward to a color test figure tomorrow or Friday perhaps...

For those who have not seen the previous posts, I wanted to have a squad of Incubi for my Adepticon army.  I had a Raging Heroes miniature (the one in the middle) which made a great Archon.  There were some left over bits, such as two alternate heads, so I used those on some Kabal warriors. 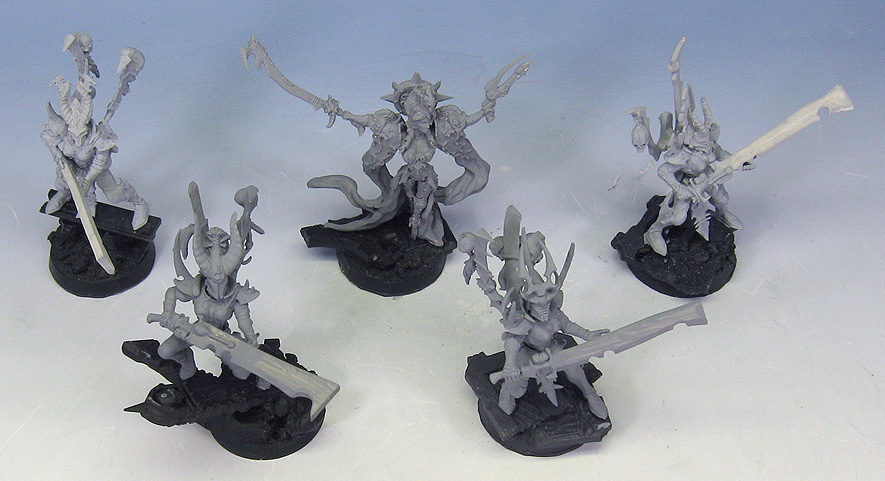 The Klaives were made with plasticcard, as were some of the trophy poles on the backs. 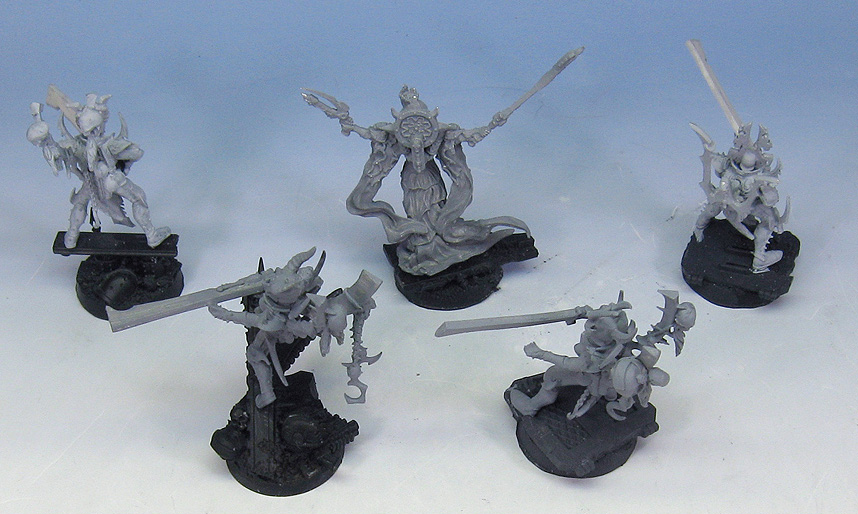 It took a bit of re-working to make the arms hold a two handed weapon, but it was worth it in the end! 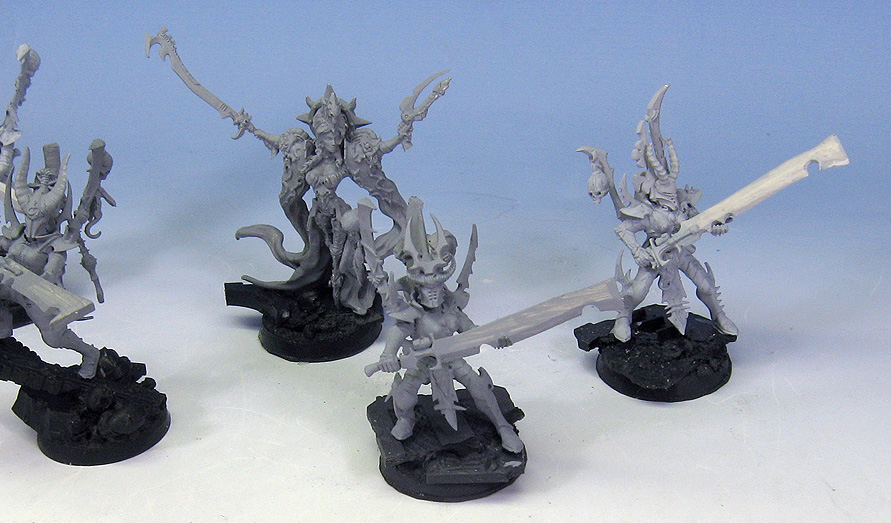 Now I have to get back to the Reaver Jetbike conversions... 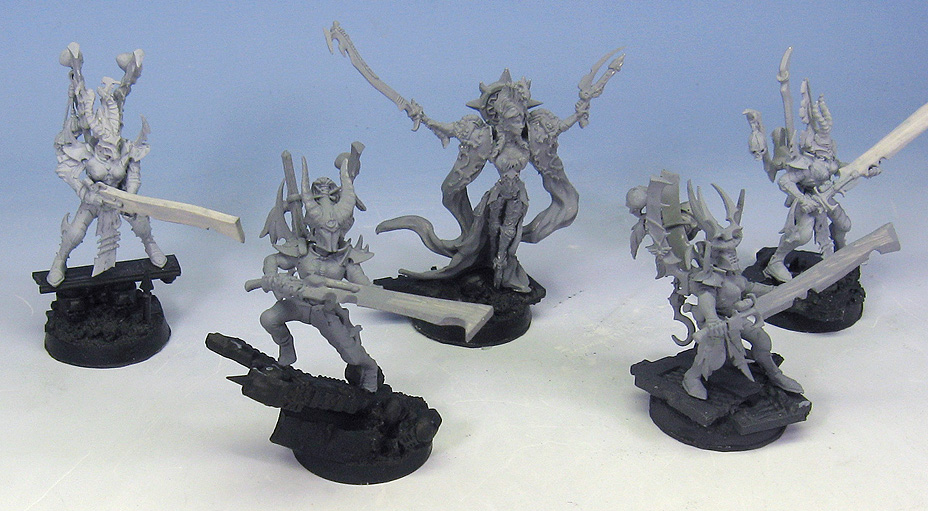 Posted by wappellious at 12:57 PM No comments:

Kicking things off: the first experiment 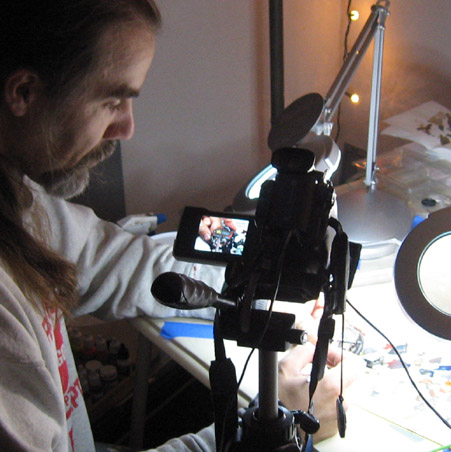 Towards the end of the day, I took about 40 minutes to try out a test video.  This was really more about camera angles than anything else.  I wanted something a little bigger, and not incredibly complex.

I grabbed a base, a palette, some brushes, and turned on the camera!

I would learn a lot in just the first few minutes of this attempt.  Keeping the thing I was painting in the camera view (and the palette too) was going to take a lot more practice than I thought.  Perhaps if there was a person behind the camera, it would not have been so difficult.  It is possible that some of the videos will require much more than a tripod! 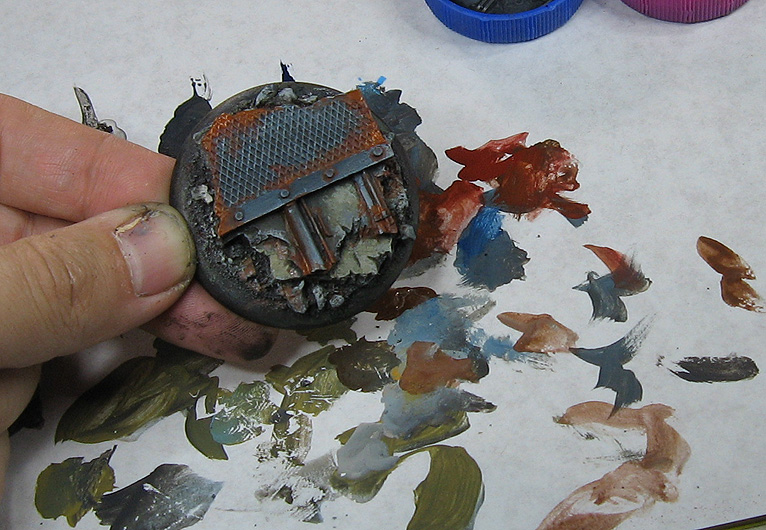 When I watched a part of the video, it was really hilarious how often the screen was filled with my hairy knuckles! :-)  Not long after that, however, there were fewer and fewer instances of such an eclipse... 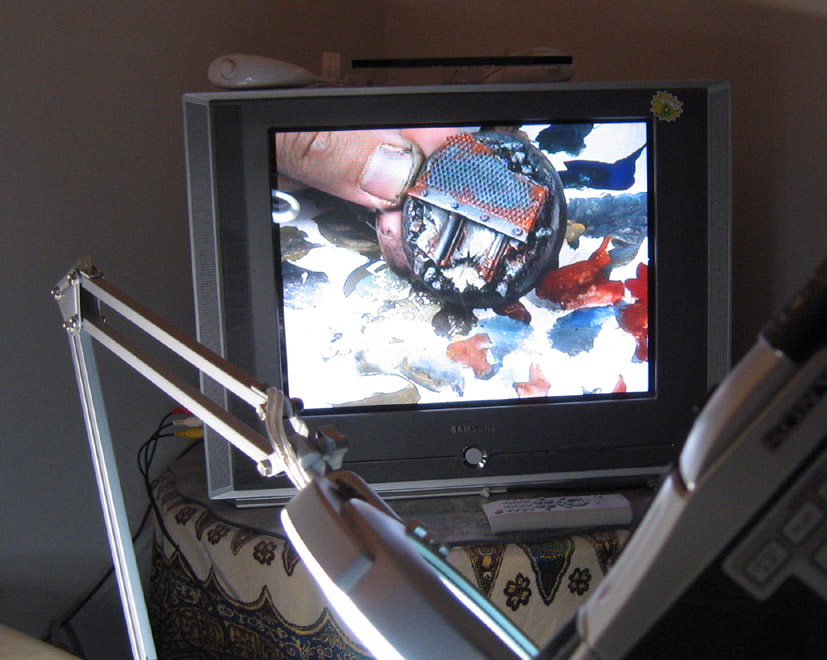 The base progressed, and I got more used to dealing with the setup.

Since I work so rapidly, the early stages have lots of wet paint swirling around.  I am sure you have seen this shiny effect, even in the still photos of previous projects.  That is a fact of life that I may just have to deal with. 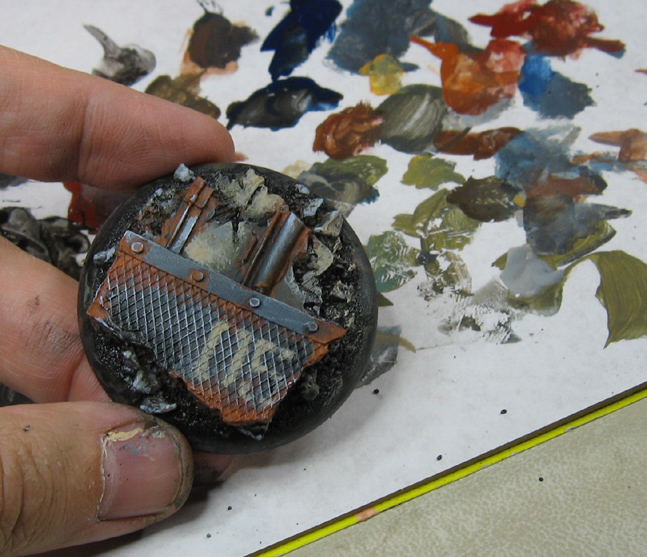 A similar thing would probably happen with the glazes, so I will have to be very careful which way I face the miniature in the lights 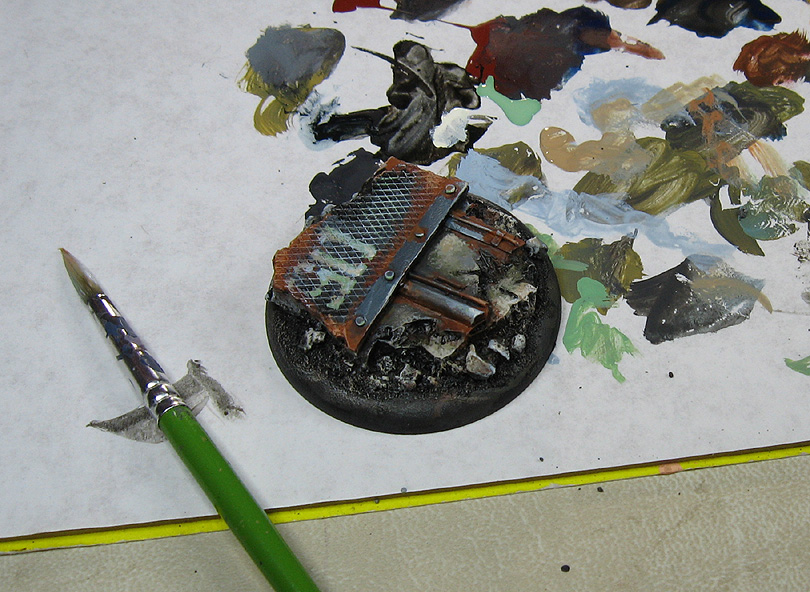 When the real vids are shot, it will be during the daytime, where the ambient light in the room will cut down on the harsh lighting effects. 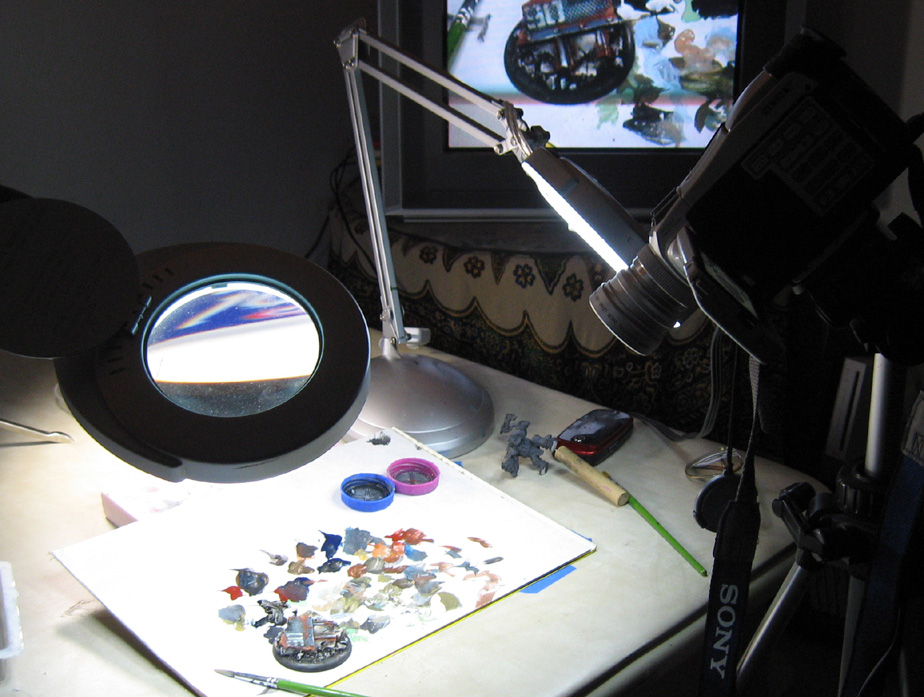 There is certainly some film for the blooper reel!  There was one portion where I sneezed, and then another incident where I whacked the tripod with my knee.  Apparently the New Madrid fault became very active during the filming! 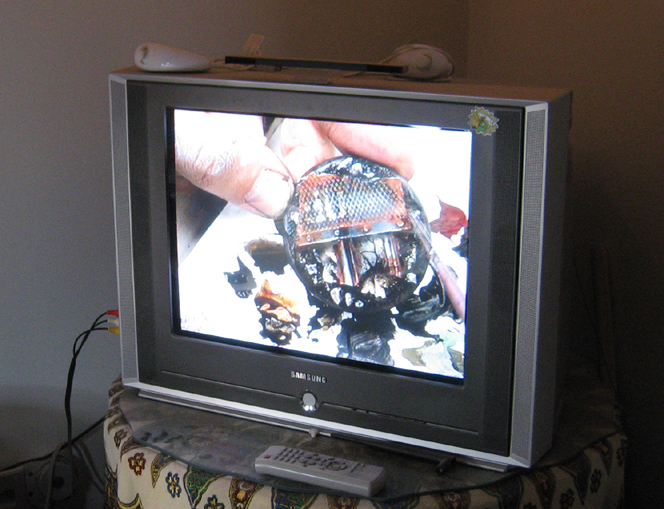 This is probably going to be a very unusual kickstarter, with all kinds of crazy stuff like this being documented along the way!  Hopefully it will make the eventual DVD's a little more meaningful for those who follow this blog. ;-)

If I get a chance, I will try to watch the rest of the tape tomorrow.  We all think that it is weird to see ourselves on TV, but seeing myself painting for the first time was a strange, nearly out of body experience!!  That is something I will probably never get used to!