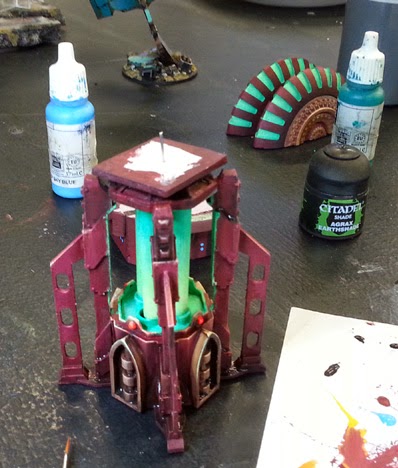 OK, while we were at Draxtar, Scott was in need of a few Void Shield Generators.  What he had was a few power generation units from Secret Weapon Miniatures.

They are fantastic kits, and are very easy to paint!

Scott's idea was to combine the two together, so that it would be more the size of a Shield generator.

I had a piece of foam with me, so I cut that up to fill the gap between the two pieces. 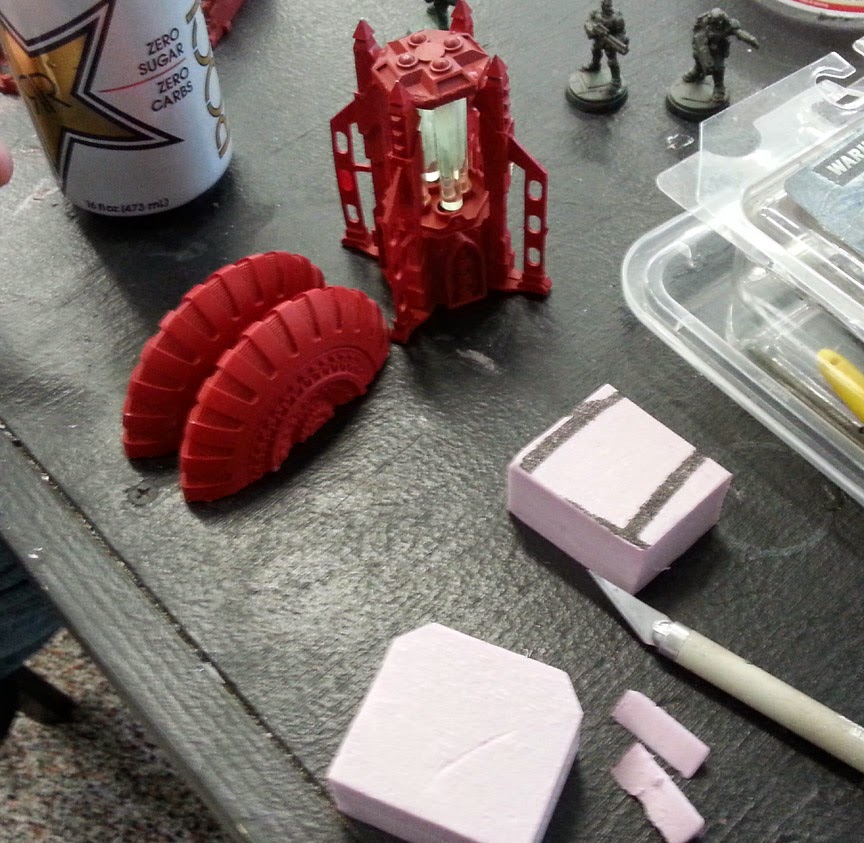 A piece of sculpey was added to the bottom section to give it more stability. 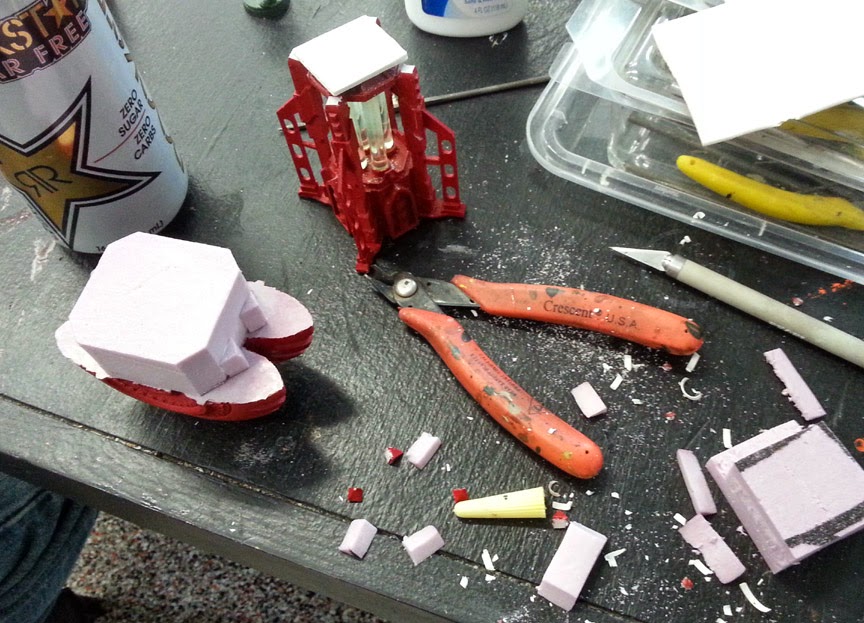 A few fiddly bits were added to the foam to give it more interest. 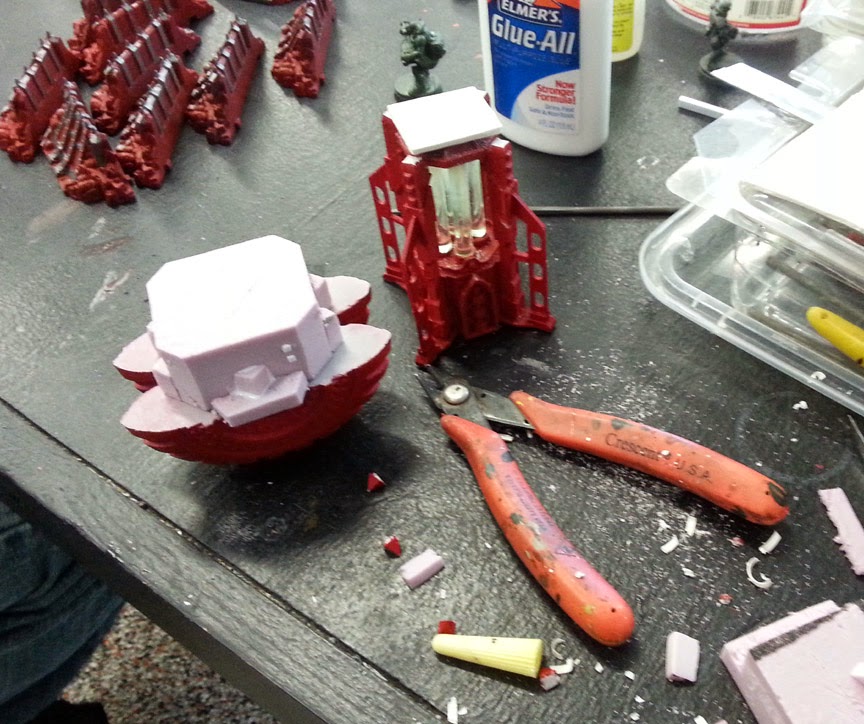 Let the painting begin!  Some fluorescent paints mixed in with Emerald and sky blue, which was then lightened with a blue/white. 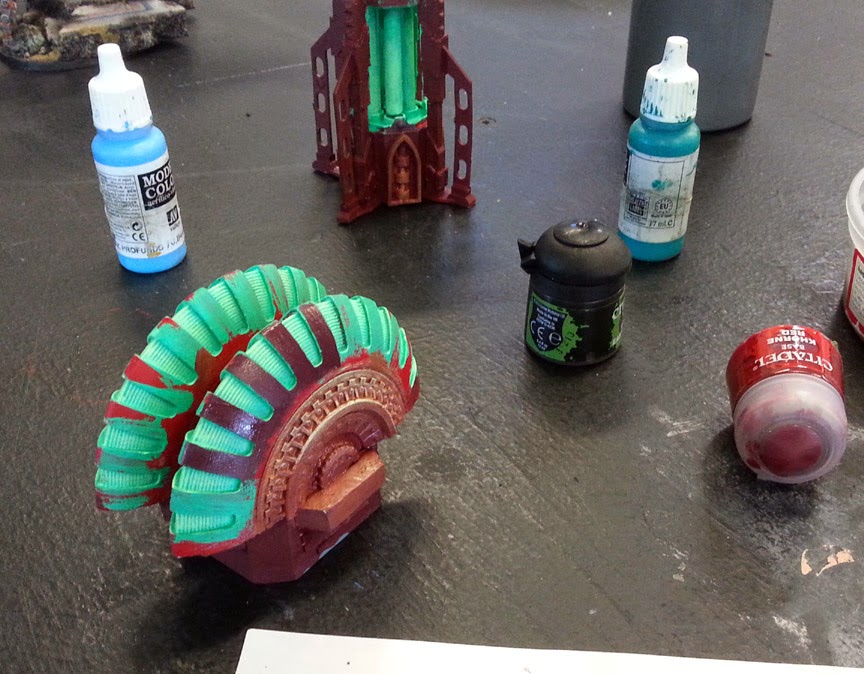 You can see what a big difference in contrast you get when you restore the surrounding dark colors.  The warm nature of the red also gives it a boost! 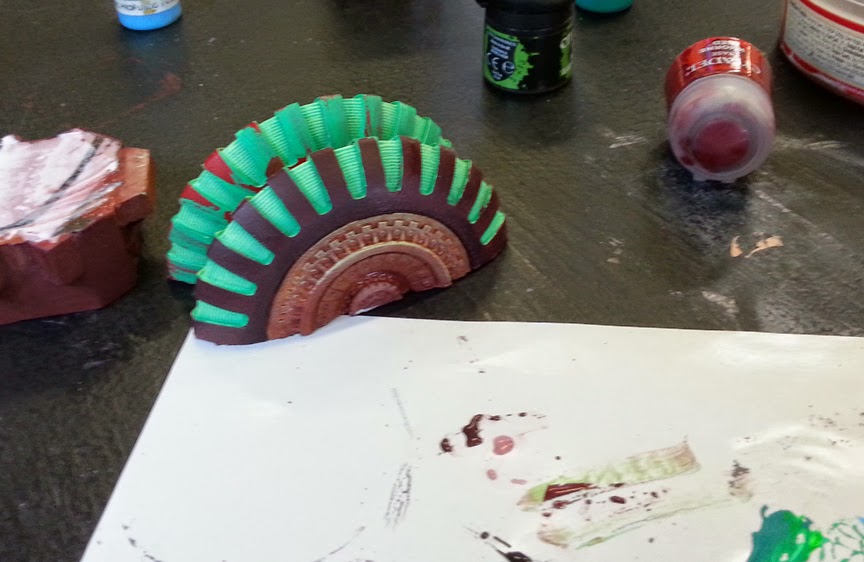 However, it is also more grayed down, which is critical. That makes the highly saturated glow colors seem that much more 'pure'. 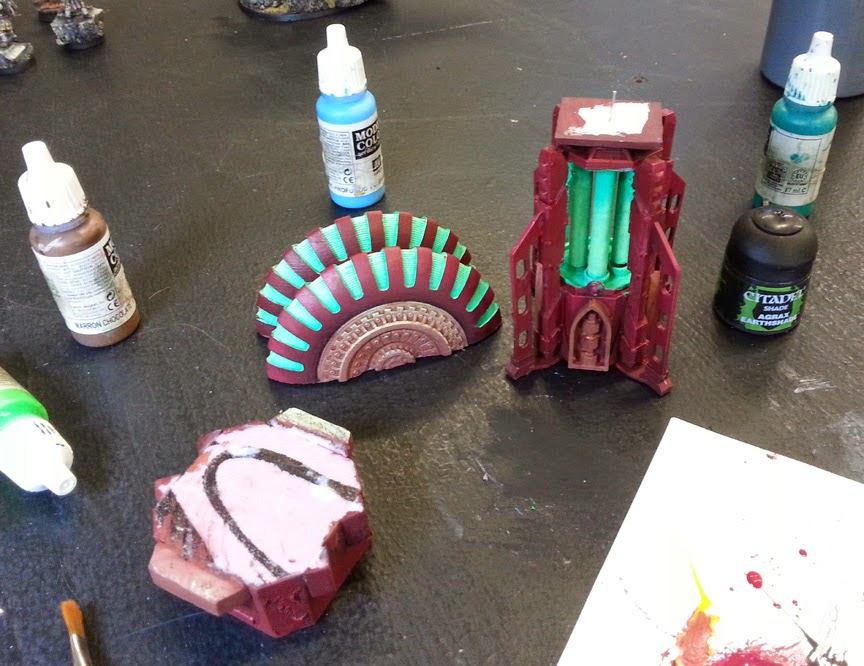 Working on the gold/brass here.  This was done to match Scott's overall color scheme. 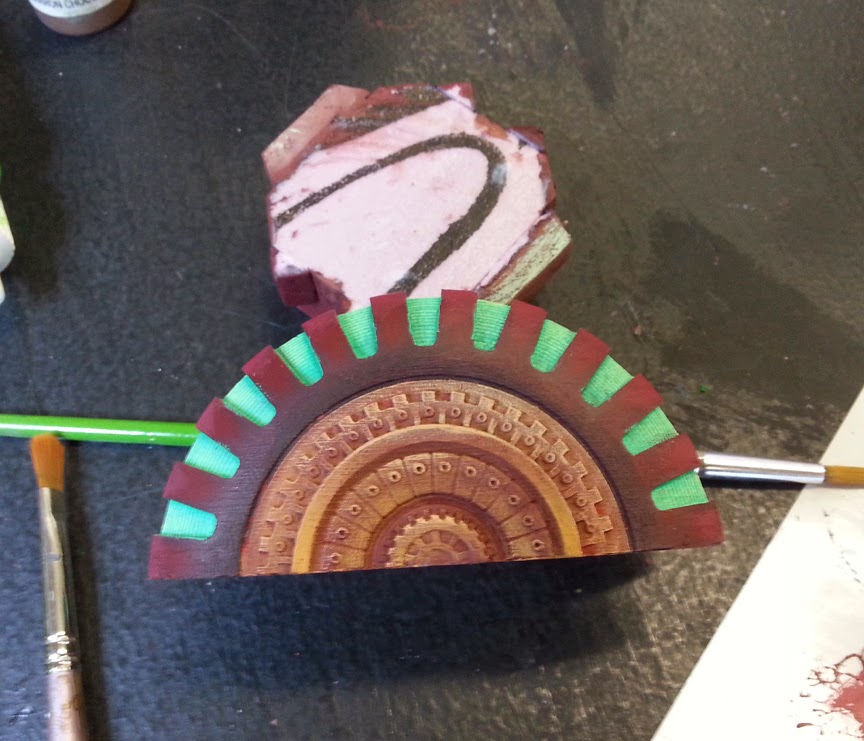 A few preliminary glazes on the lower unit.  These were done by mixing some deep red wash with black, adding some Reaper Brown Liner to warm it up a bit. 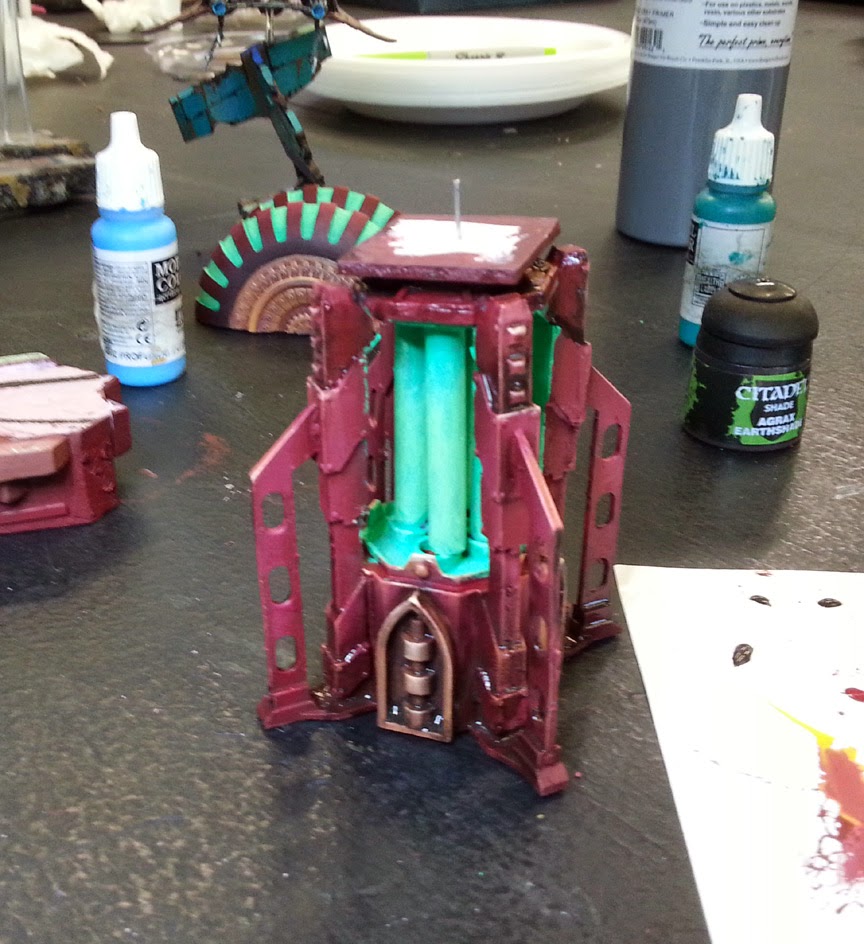 A few more darker glazes near the bottom.  Even more Brown liner added to the black shade. 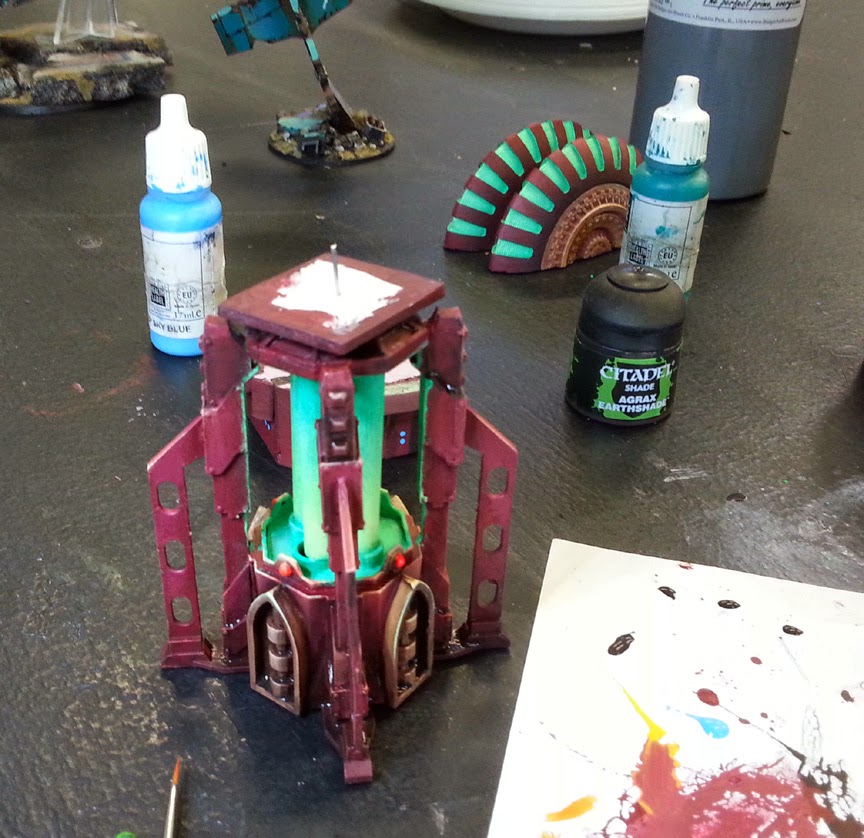 I painted a few little glowy diodes on the extra tower section for effect and interest. 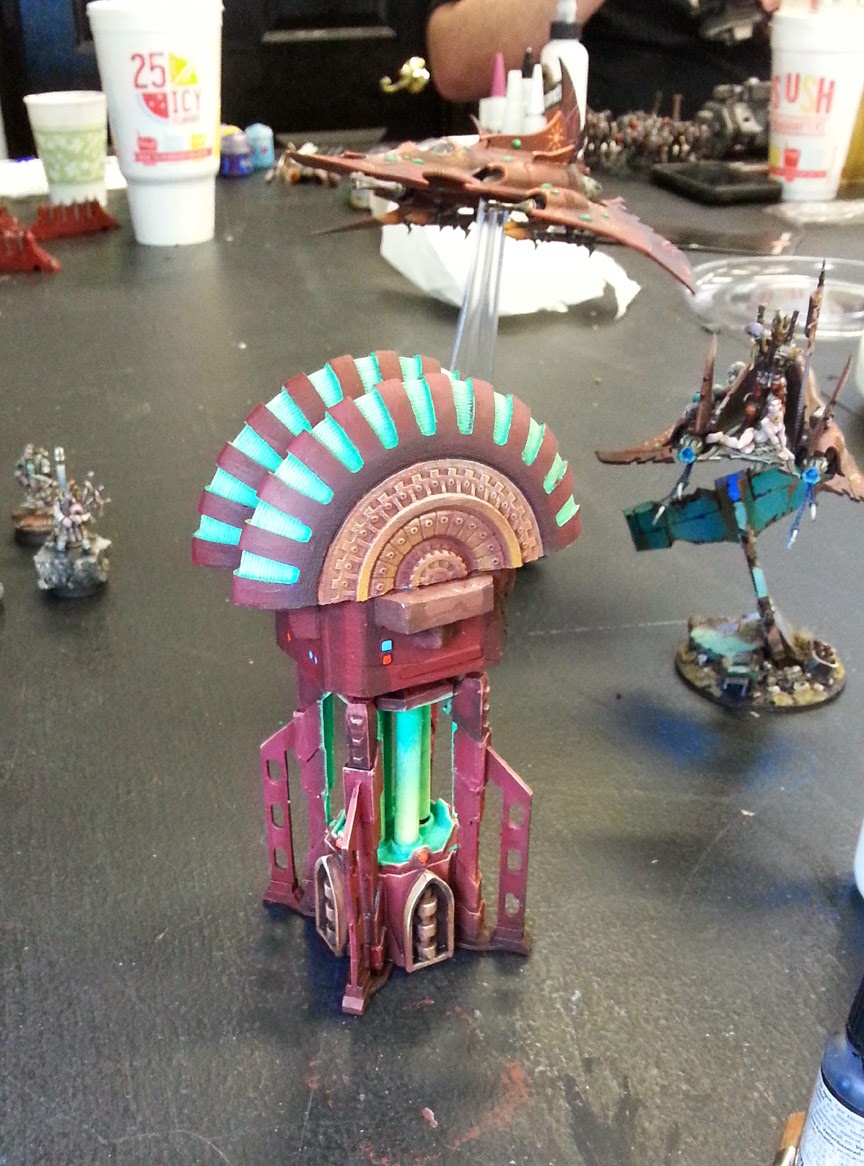 Two of them side by side.  Very Mayan in appearance! 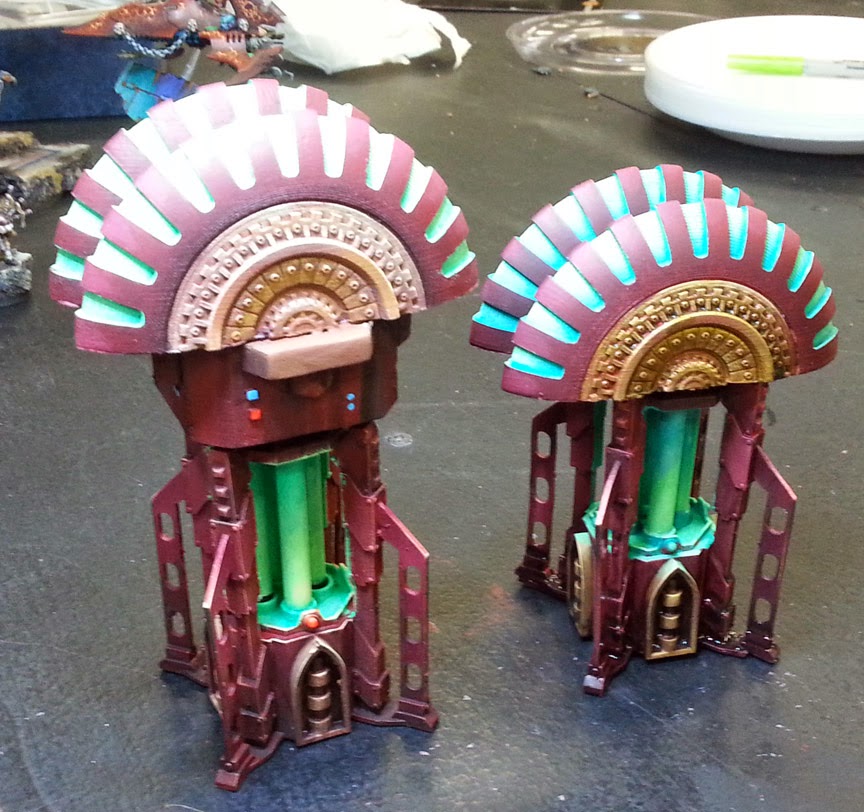 Posted by wappellious at 4:10 PM 2 comments: 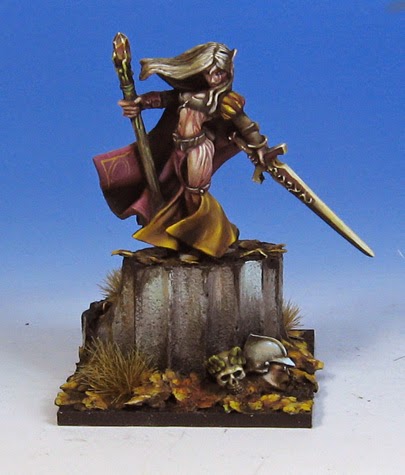 Ok... you finally get to see the other base with a mini on it!

This very cool Reaper mini was on the list for a number of videos.  Freehand cloaks, flesh tones, even yellows (obviously).  In the end, it was used for the Object Source Lighting video.

I had lots of fun working the various yellows, orange, browns and reds.  With the ground cover and even the tufts working in that same color range, I knew that keeping everything in harmony would be relatively easy.

On the flip side, however, that meant creating contrasts would be slightly more difficult.  That had to be done through value contrasts and saturated vs unsaturated versions of colors placed opposite of each other.

Thanks again to Mr.Justin for his fantastic broken columns!