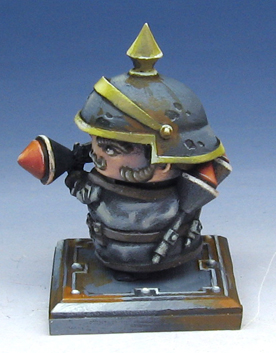 OK Rivet Warriors!  We went through a step by step on the Ally, so now it's time for their adversaries!!

The principles in painting this guy were the same as the Ally.  I used a #4 flat brush, a #8 round, and a small liner brush.

Instead of priming this NATO green as I did with the Ally, I mixed by black and white brush on primer to create a grey, seen in the far left of the image.  I took Vallejo German Grey and intermediate blue, and put that color on the helmet and coat.  More intermediate was added, until it was time to get it a bight lighter.  I did this by adding on some GW Deneb Stone.

For the flesh tones, I mixed the Vallejo brown rose with my grey (similar to how I mixed that same color with the camo green on the Ally), so that the flesh would reflect the grey.  Once the Brown rose needed to by lightened, I used a pale flesh color to get those last bits of highlights.

The approach to painting the eyes was the same as well, trying to keep the area around the eye e bit darker. The eye itself was an off white, to which the iris was added, followed by the little dot highlight.

As I was doing this, I used Vallajo Game Color earth to start the brass on the helmet.  I mixed in a tiny bit of  Reaper pale saffron to keep it more greenish than yellow/orange.  I used the pale flesh color to highlight the brass, with a bit of very pale seafoam green.  I kept using my flat brush during that whole process.

You can also see the first dark red layer on the end of the grenade launcher was painted.

That initial color (Vallejo cavalry brown was then lightened with a bit of flat red, and then lightened further by adding GW vomit brown.  This kept the lighter reds from getting either too pink, or too orange.

The hair, coat trim and belts were painted in with some GW Dryad brown.
Towards the end of this stage, I took my glazes and shaded the coat, helmet, and grenade launchers darker with a blue/black glaze.

I used some Reaper liner colors, such as the dark brown and blue, with my fine liner brush, to clean up any areas by enhancing the shadows along the belts and trim.  I did the same for the helmet and the extra grenades.  The hair was lightened by adding the light seafoam green to the dryad brown.

More lights were added to the  belts and trim, as well as the brass on the helmet, mixing white with the light green.  I lightened the coat a little more by adding even more deneb stone to the grey mix...

Almost there!  I did the weathering on the helmet just as I did for the Ally.  I indicated some paint chips with a dark brown, which was highlighted along the bottom edge with some light grey, while the top edge was given a shadow line of black.  Some rust was added as well by using a watered down GW calthan brown.

The rust on the base as also doe using the watered down calthan brown.  The old GW foundation paints break down very nicely when thinned down, where the pigment will really sink into crevices, almost like a glaze!

And here is the finished product!!!  Ready for action. 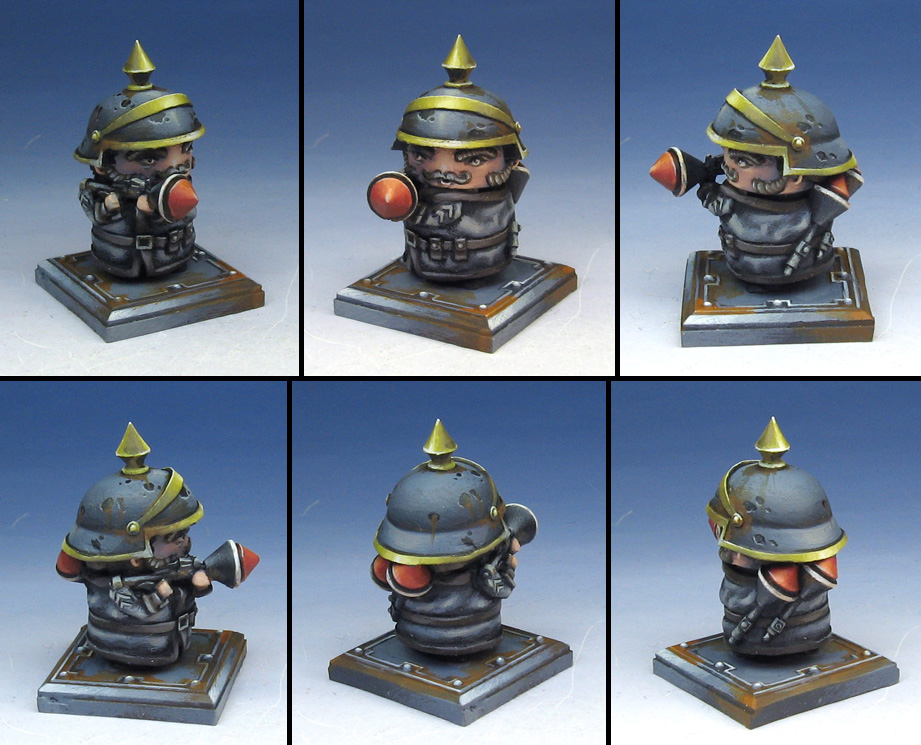 By the way, I am very happy today, as the Painting Pyramid has reached its second stretch goal level!  You can check it out here:

http://www.kickstarter.com/projects/891905985/discover-the-painting-pyramid-with-james-wappel
Posted by wappellious at 8:35 PM No comments:

The finished views of the First Temple of Blood 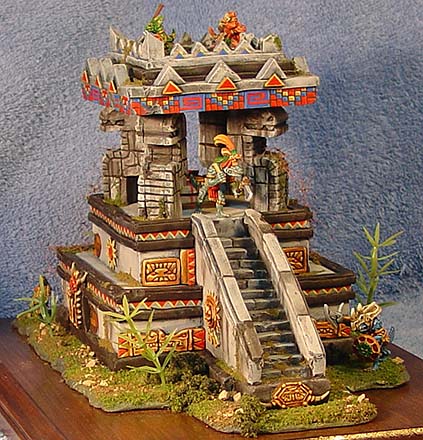 So, we see what the Temple looked like upon completion!

All of the glyphs have been painted, the tiles, and the weathering. 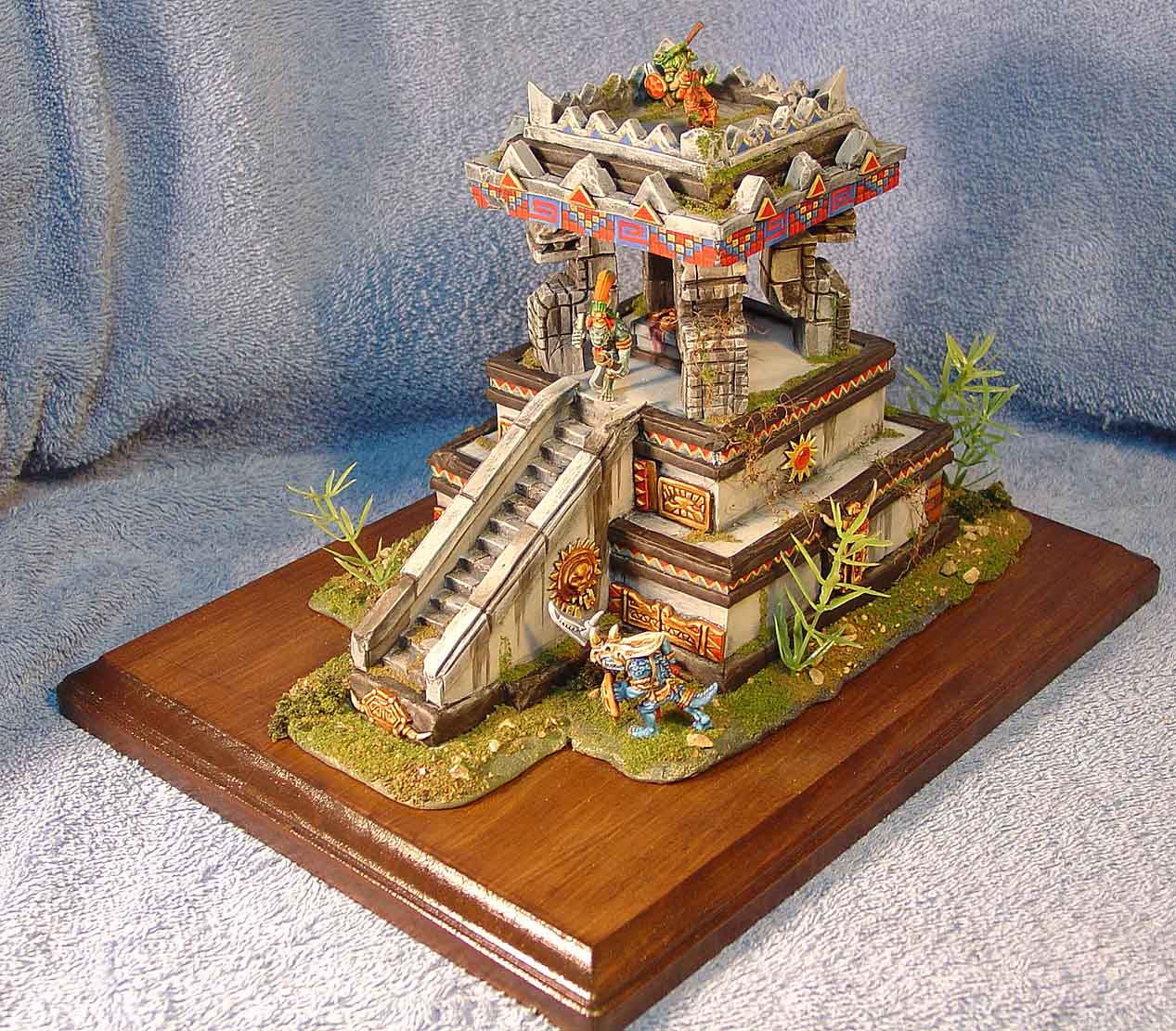 Grass and flock have been added, along with some aquarium foliage to get more of a jungle setting.  I also used some vines from Woodland Scenics.  It is a two part system.  There are the vines themselves, which you glue to the desired surface.  Then you can glue a variety of leaf colors onto it, creating some nifty ivy!

This will show up more clearly in the close ups that I took, and will be posting later. 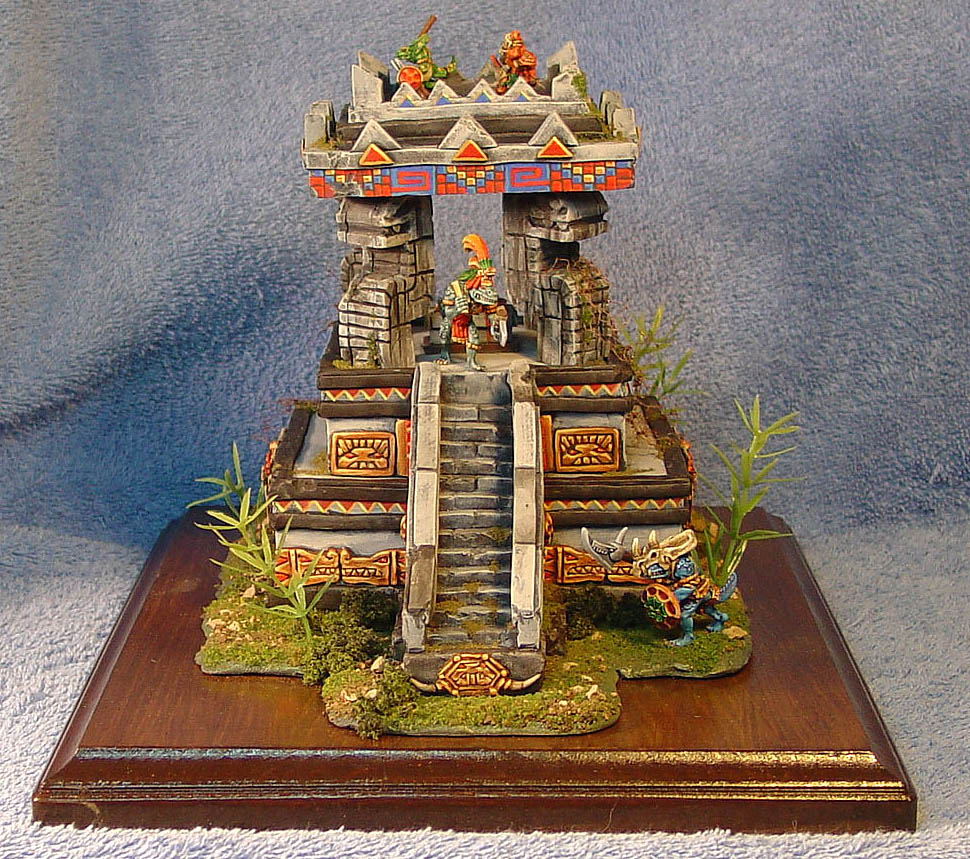 You can also see how the various figures played their roles in completing the diorama. 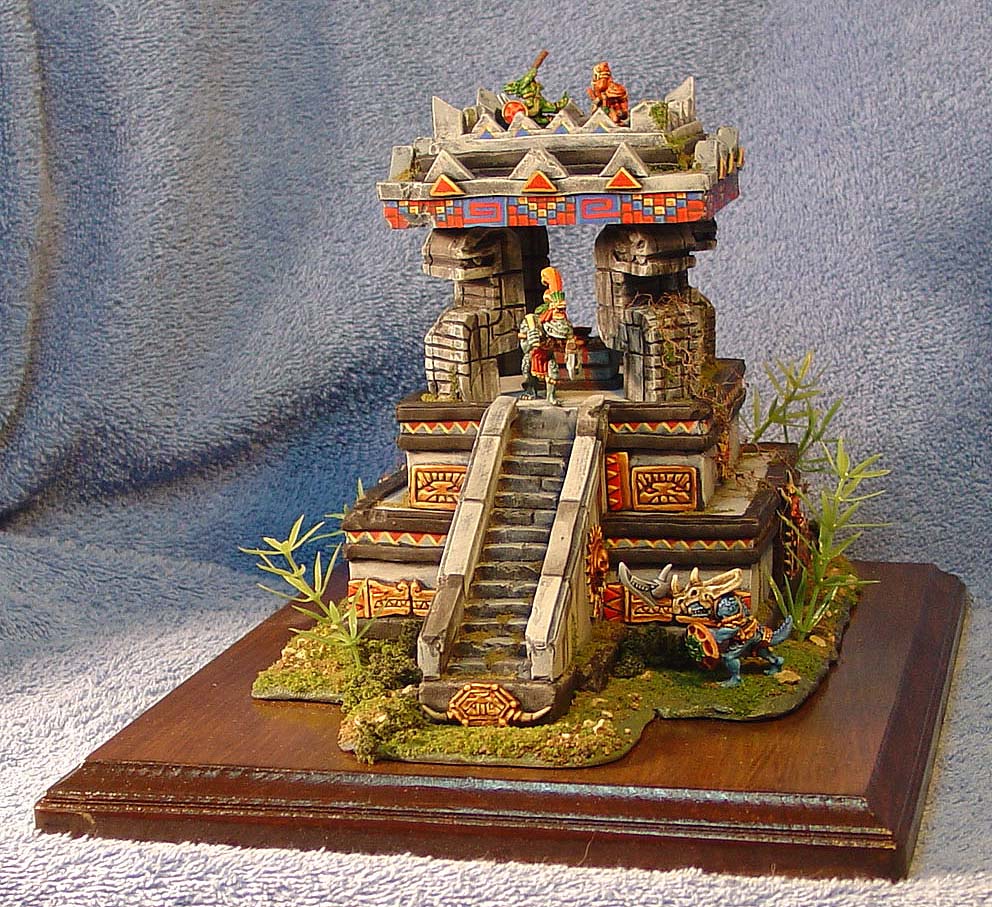 Here's some nice views of the weathering, and the exposed brick understructure... 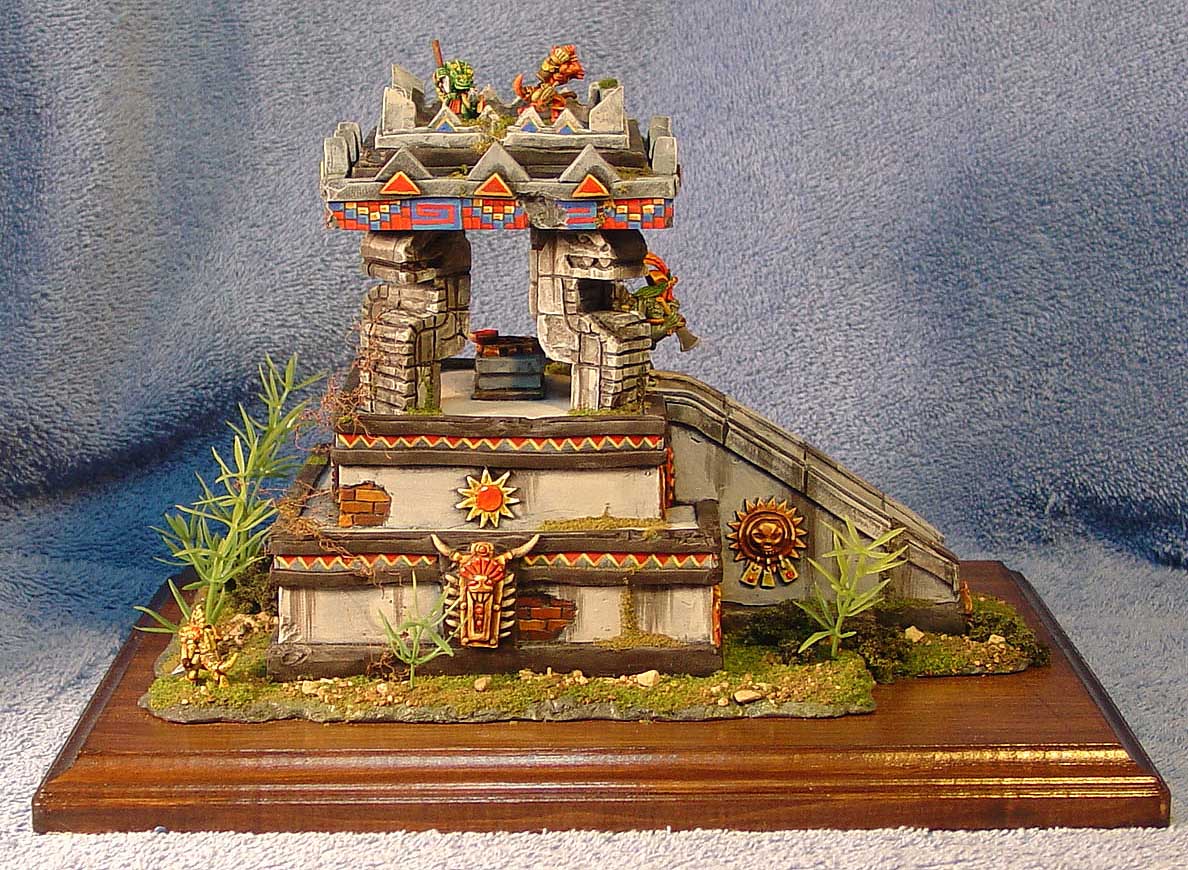 The view from above! 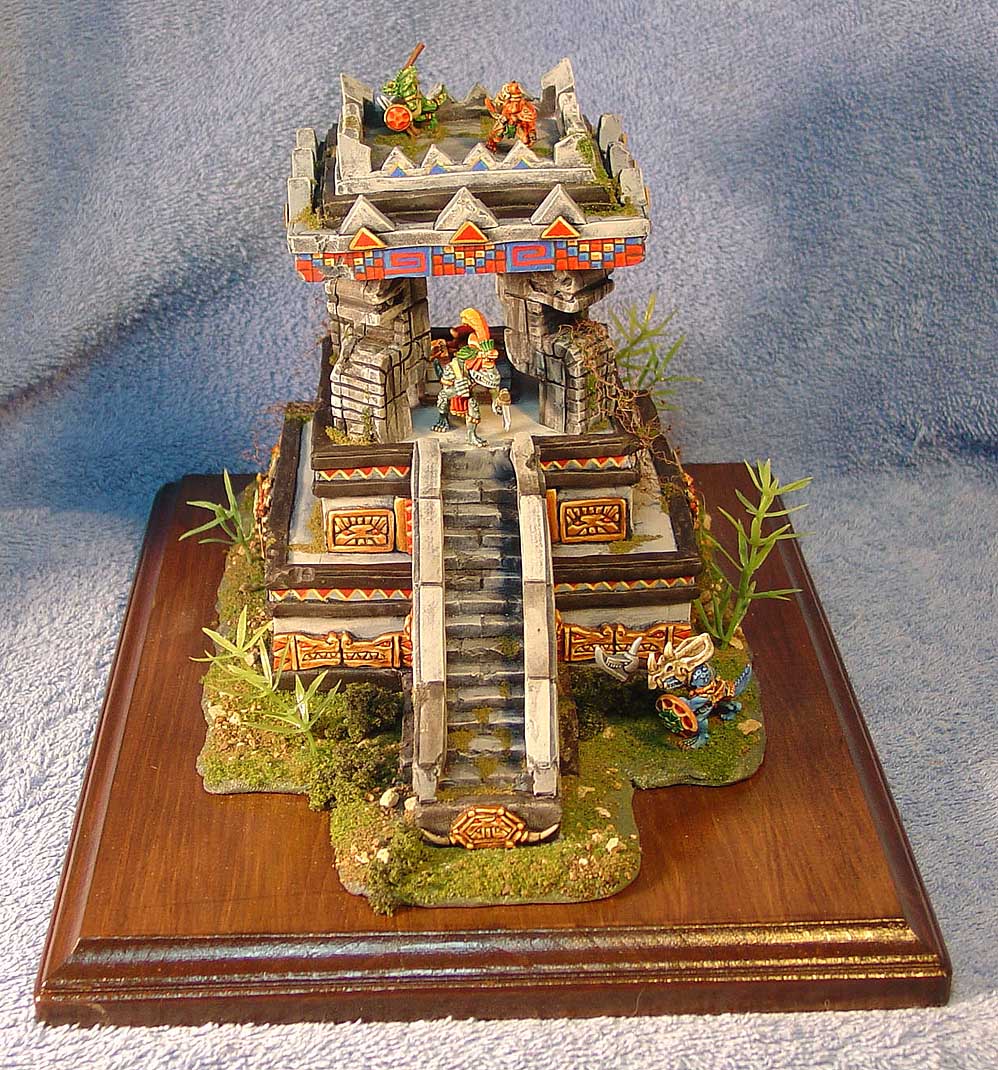 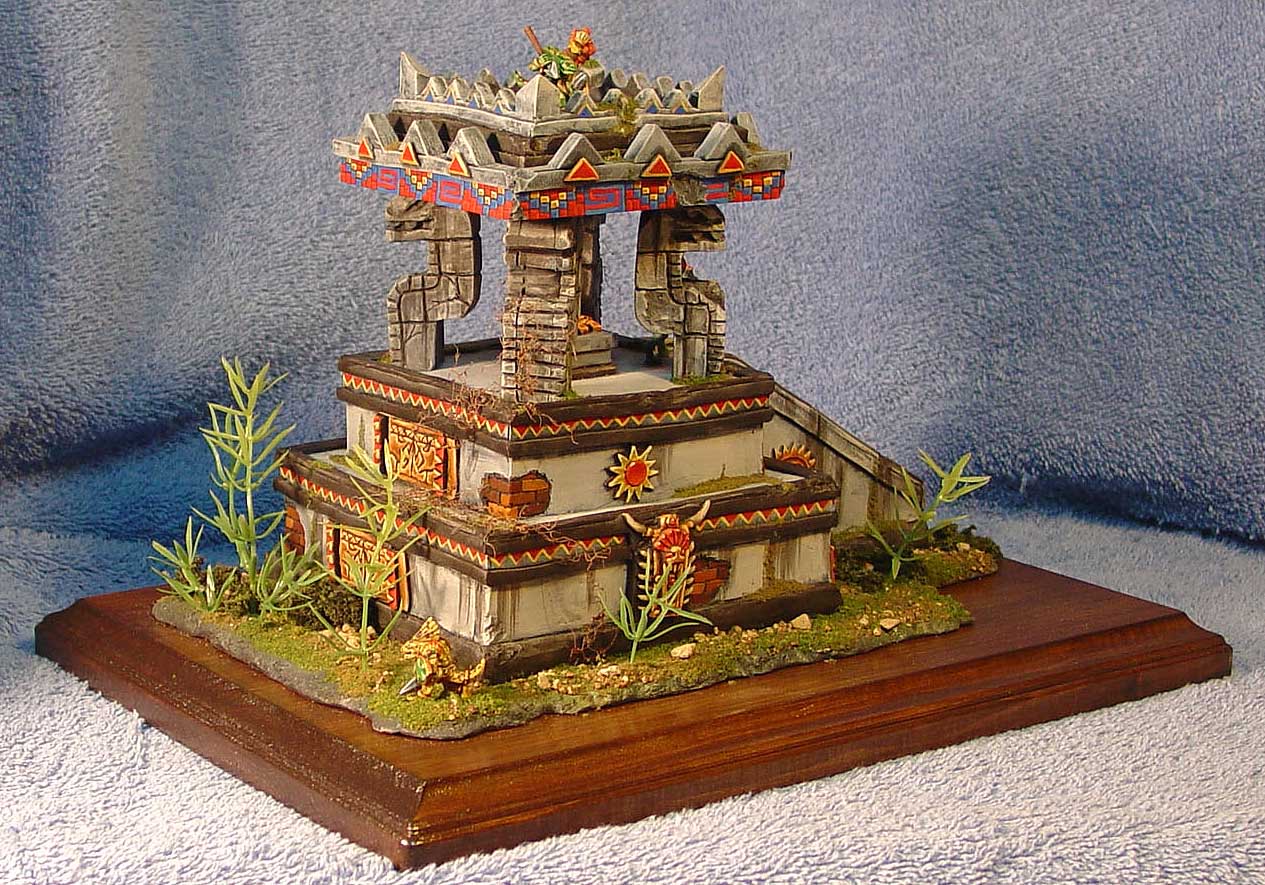 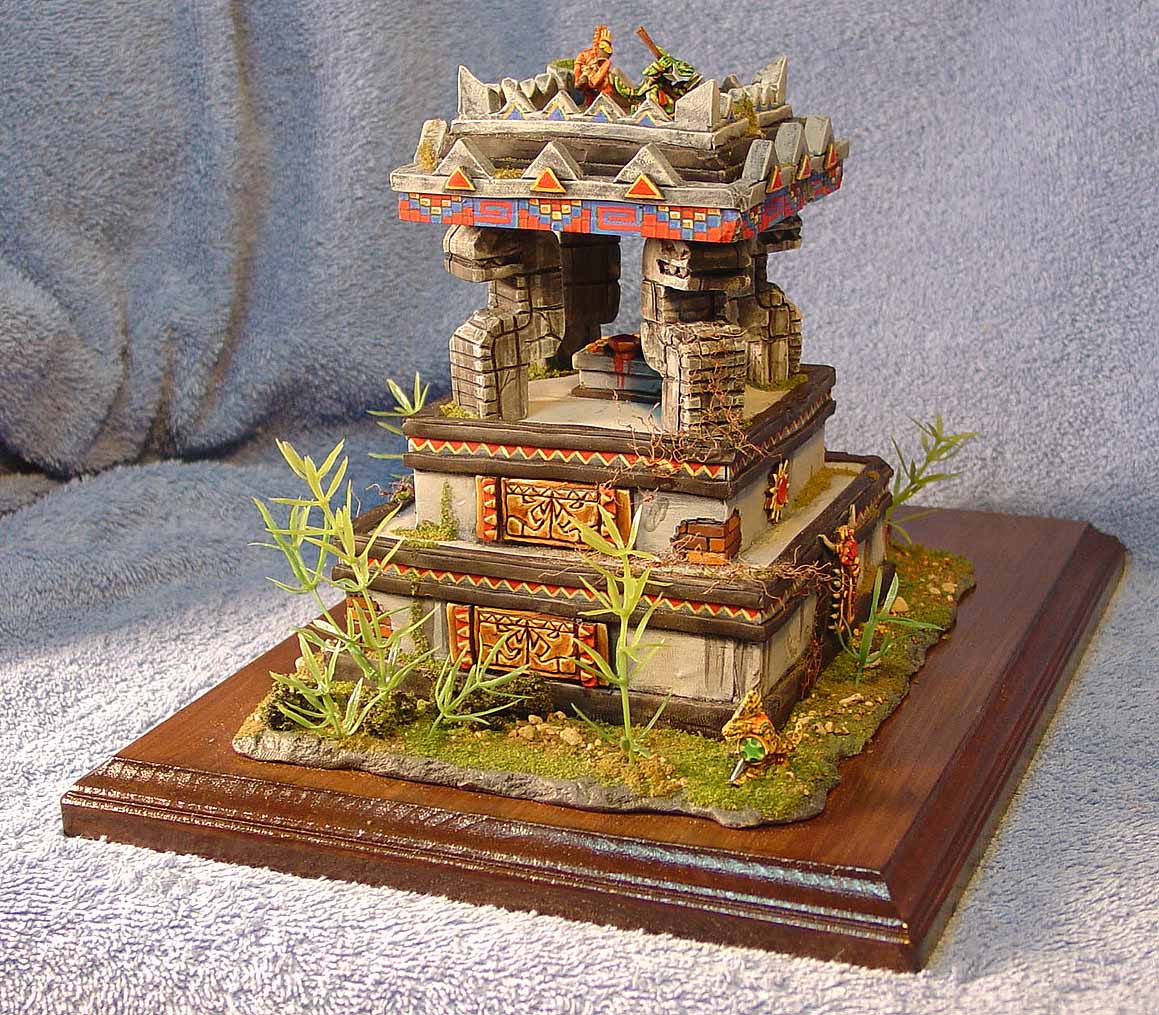 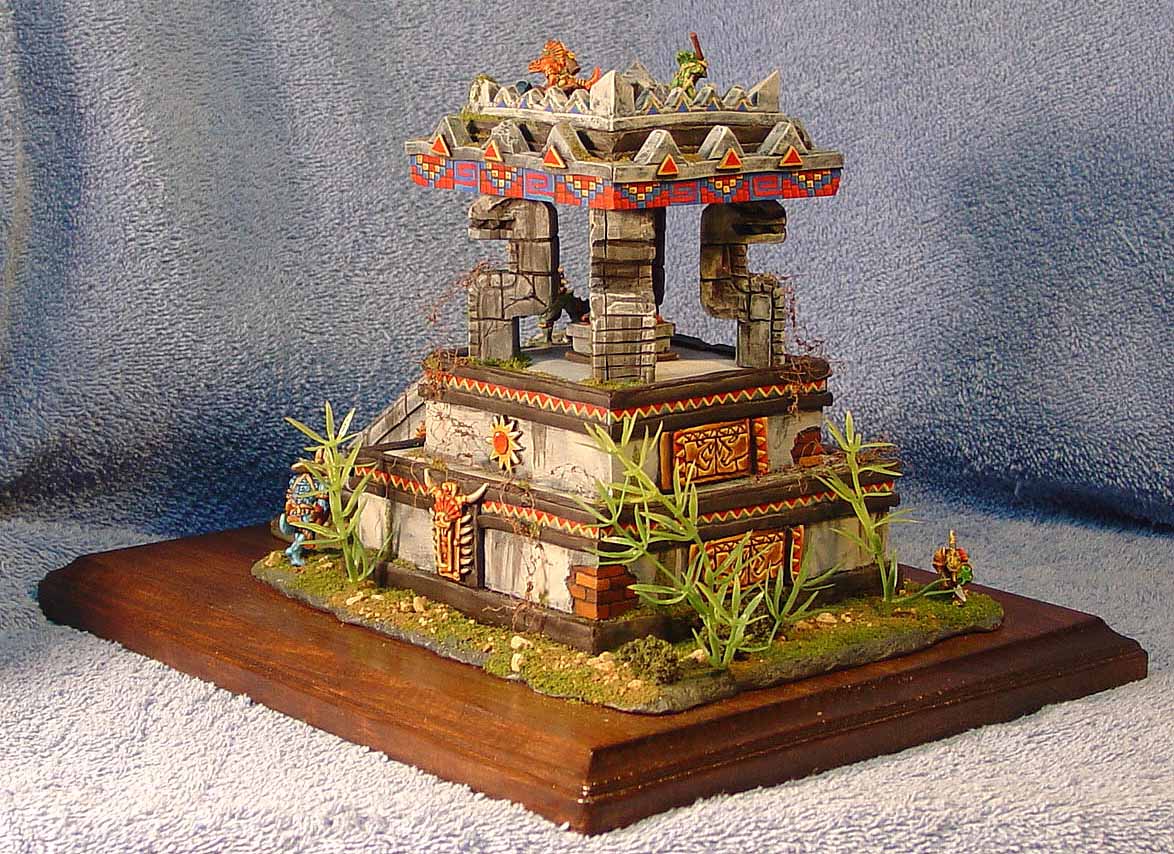 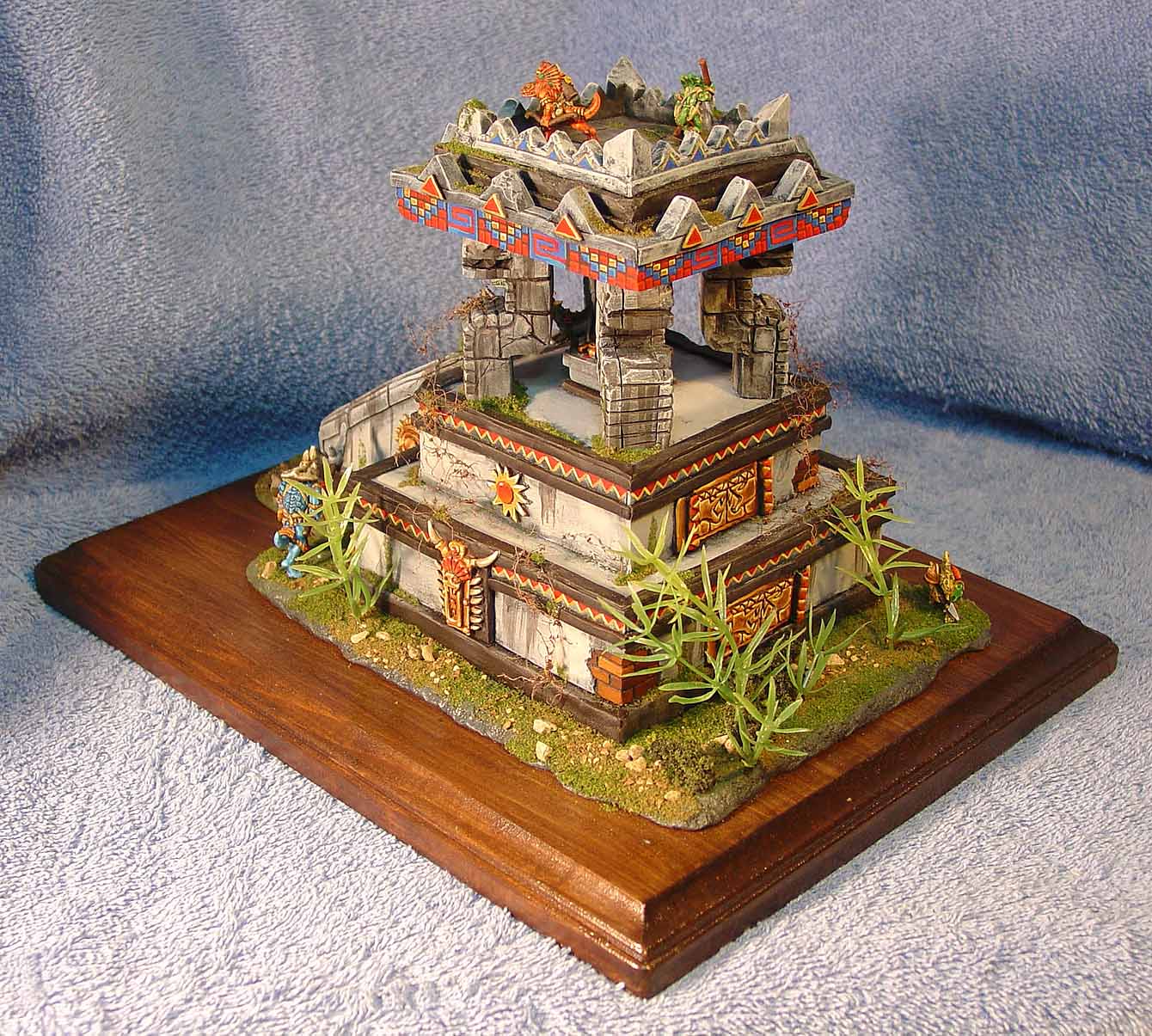 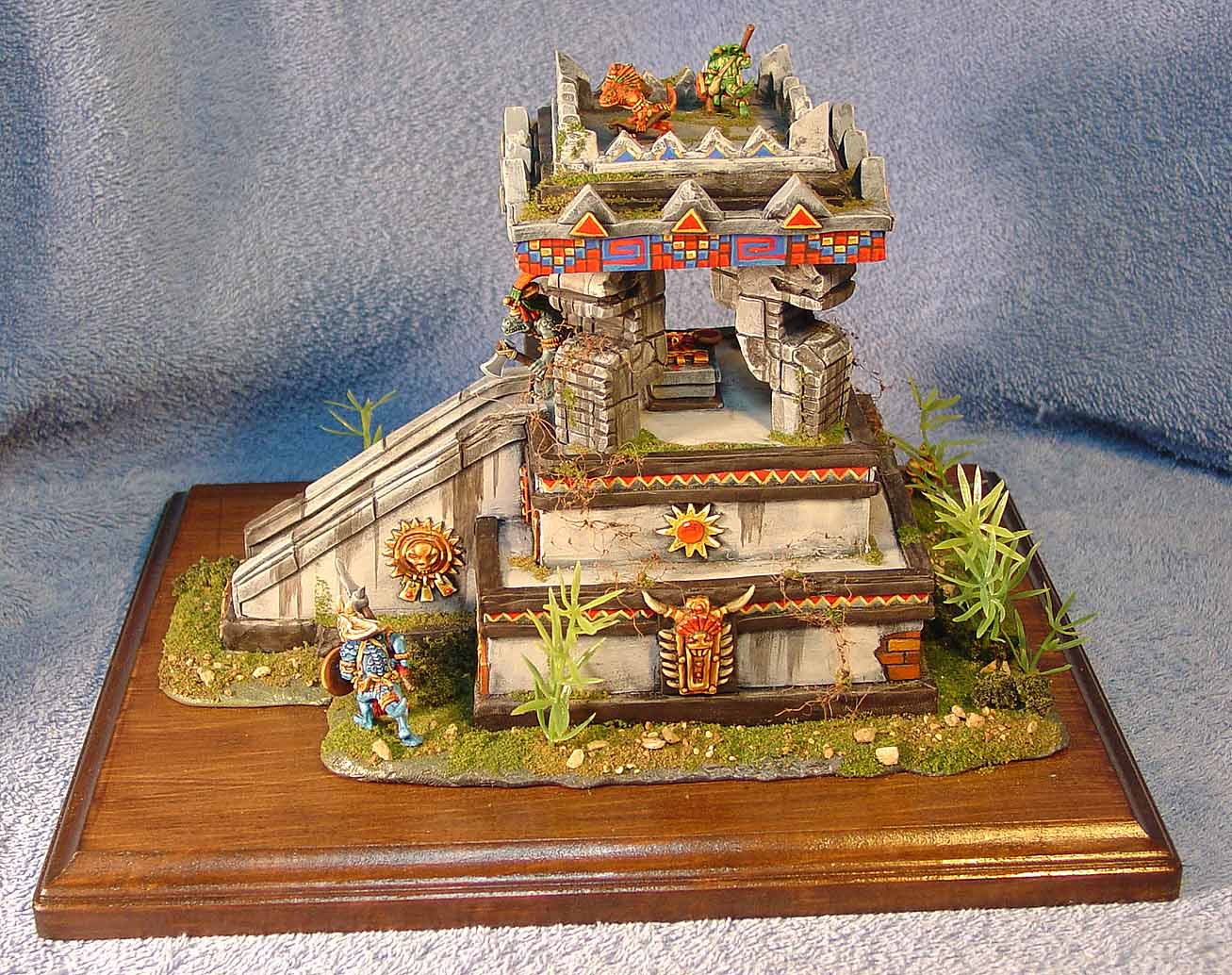 Tomorrow I will post some more views of the Temple... from up close!