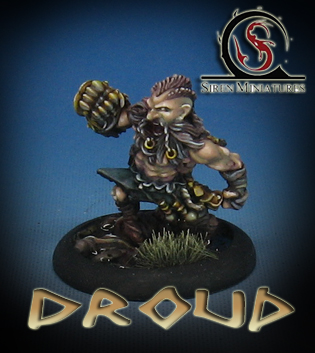 As I have mentioned before, Siren Miniatures are packed with all kinds of details, and this was no exception.  It seemed like a very simple dwarf, until I started painting it!  Every time I turned around, there was another sneaky element lurking.

It does make it more enjoyable to paint when you have crisp detail.  I believe at the time I was also working on other much older figures that were just the opposite, where everything had to be "painted in".  That was no fun at all by comparison!

I used another Secret Weapon base on him, to make it seem like he was running over the body of a fallen foe.  As I was working on this, I was also painting monsters and historical figures... taking advantage of similar colors, even though the figures were drastically different in genre.

Posted by wappellious at 11:13 AM No comments: