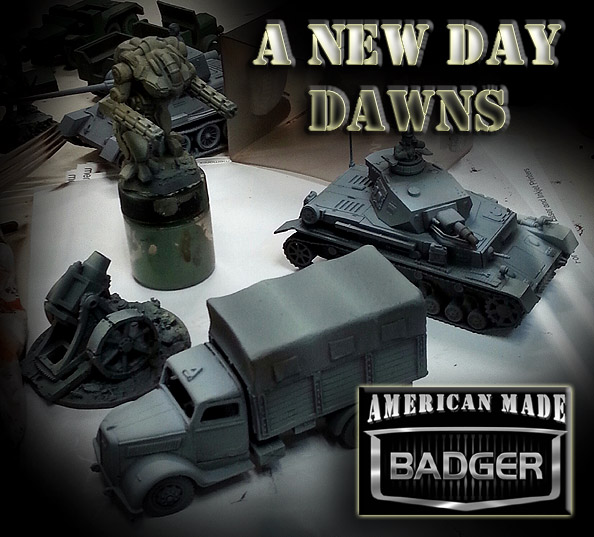 While we were down in Peoria, I did some extended demos using new Badger airbrushes, and a new compressor! 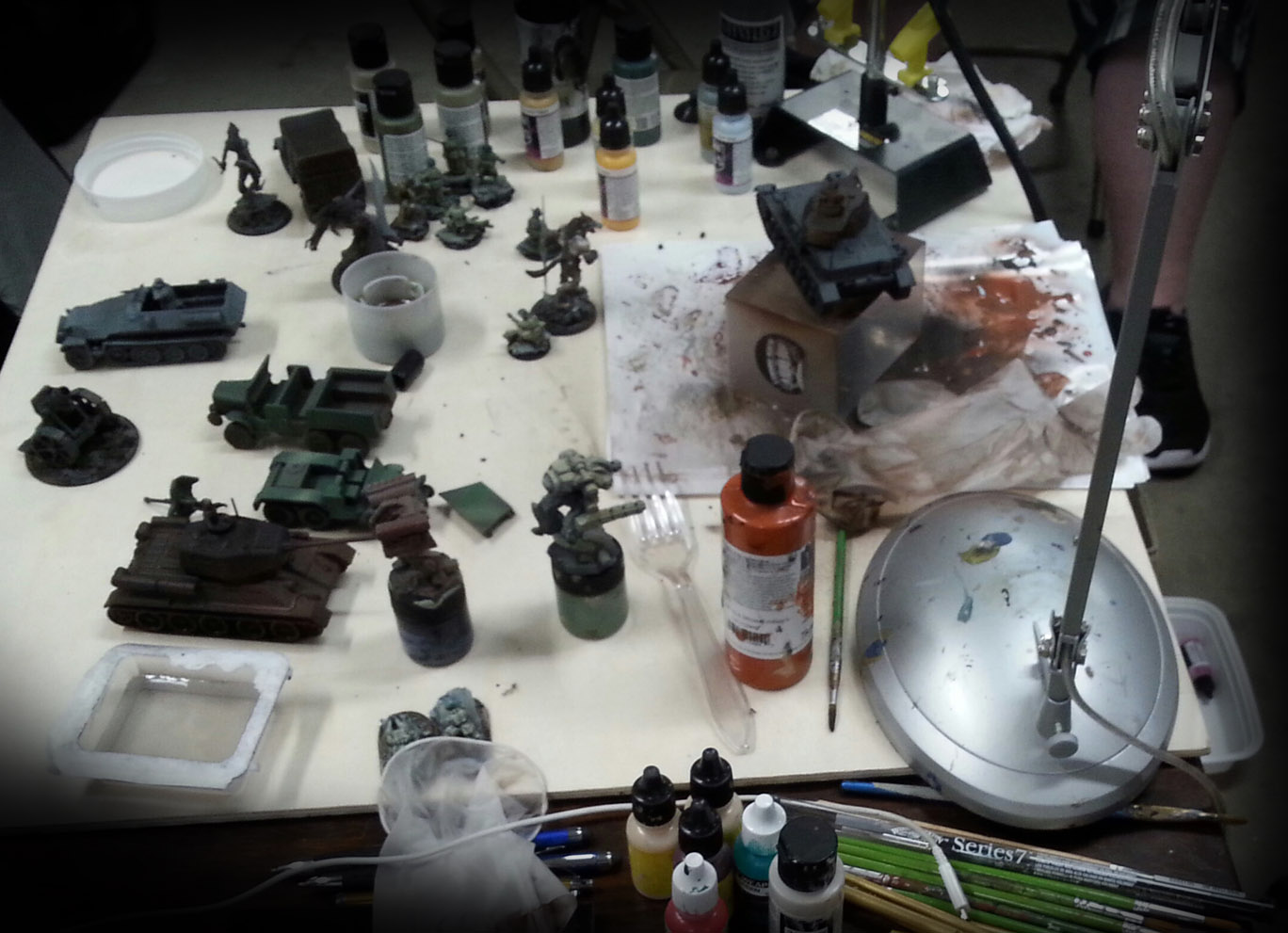 It would be nice to have a quieter, more regulated compressor again, like the one I had years ago.  I also wanted to test the various types of brushes, since there are a host of projects that should be ideal for each of them. 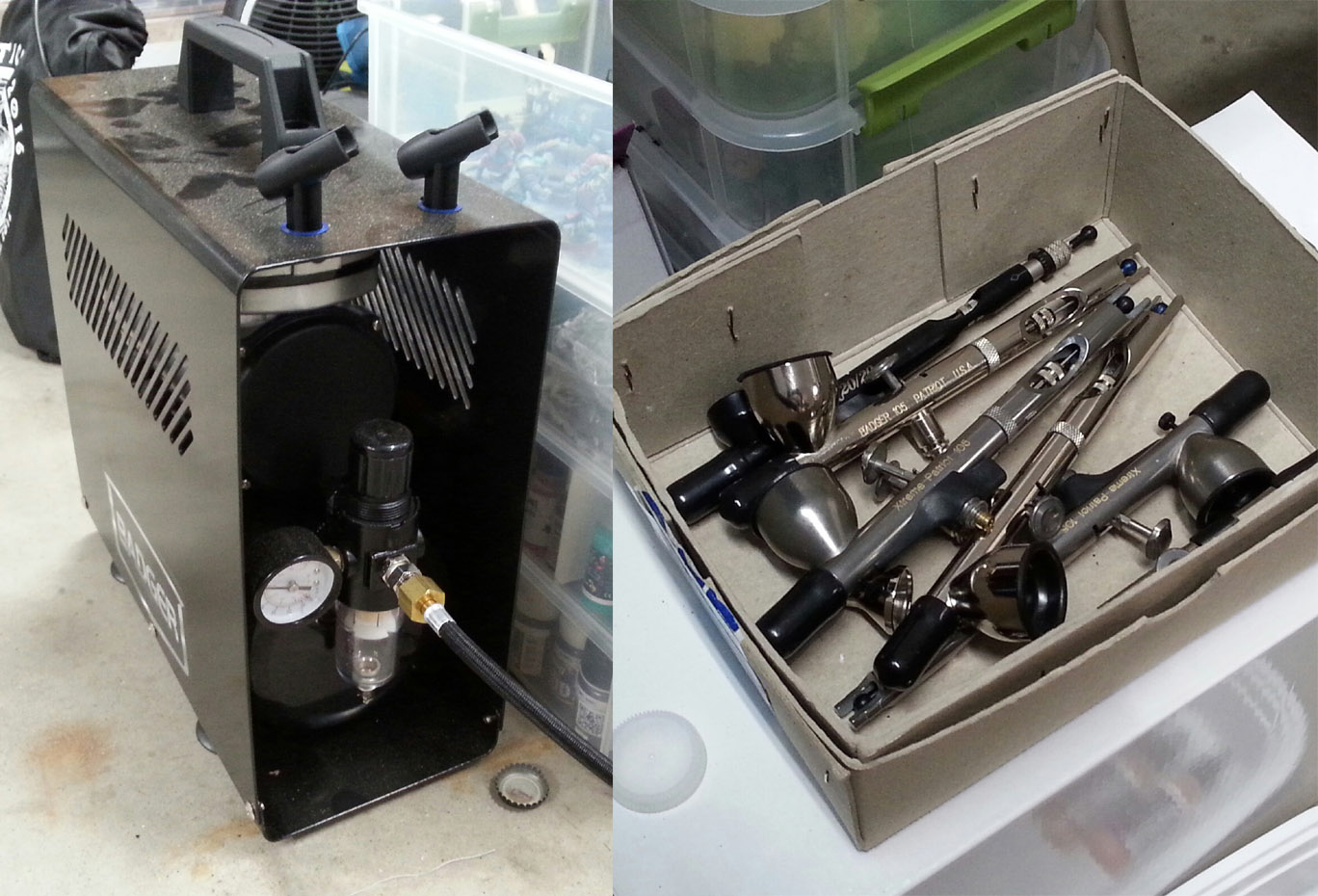 This first test was conducted with the Sotar 20/20.  I had no idea what to expect, but I decided to start in with my usual primer-painting technique.

Just as I did with the vehicles you saw in the links above, I started out with the "layer cake" of primer.  That is, I put orange in first, followed by a layer of black.

Once you start spraying, the orange soon turns into a fantastic shade of brown, which can be rust or red lead primer.  Basically, you are "pre-weathering" the vehicle!  This also goes for standard miniatures, especially when painting their bases. 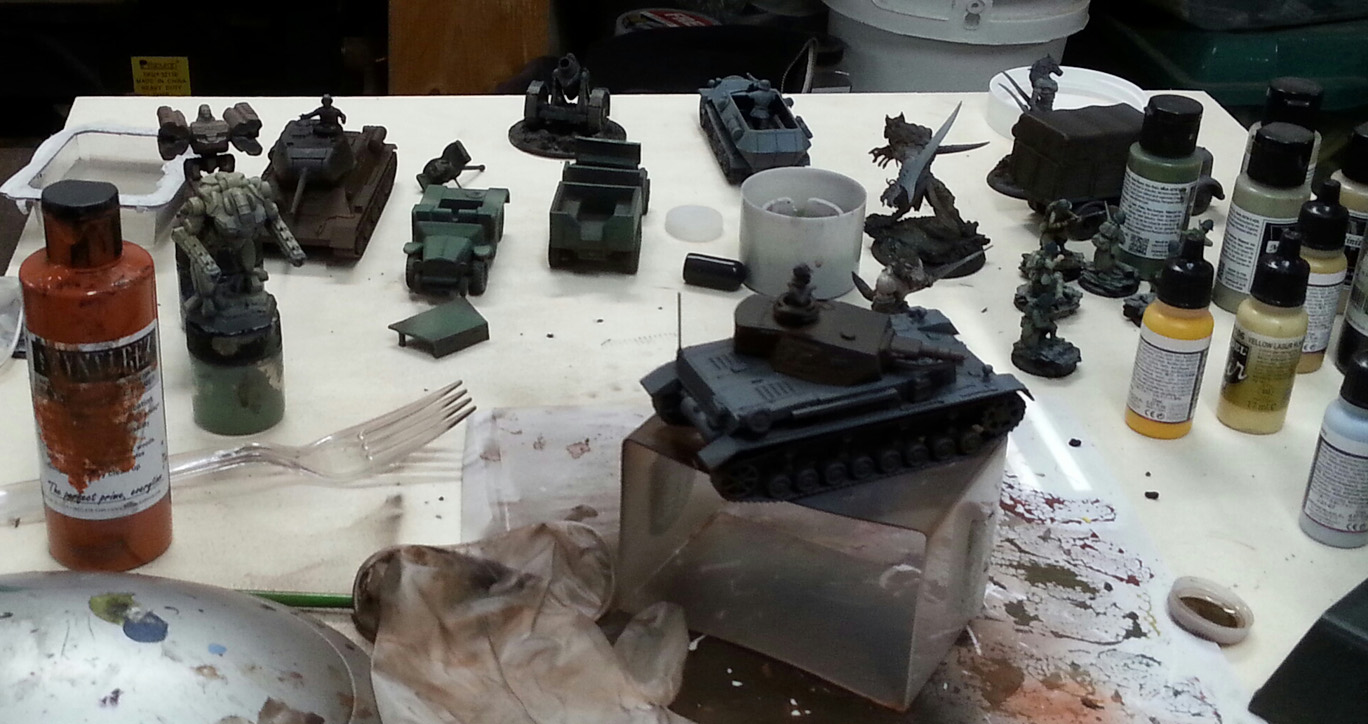 This closer view might give you a better idea, as you can see the difference between the turret and the hull.  The turret is still in that orange to black transition stage.  The hull has moved on to the next stage of the layer cake, which is adding grey primer to the black.

Keep in mind that there is NO MIXING in the cup.  The layers must be separated, and allowed to mix on their own to get that transition.  Even shaking the cup is enough to disturb the delicate layers :-) 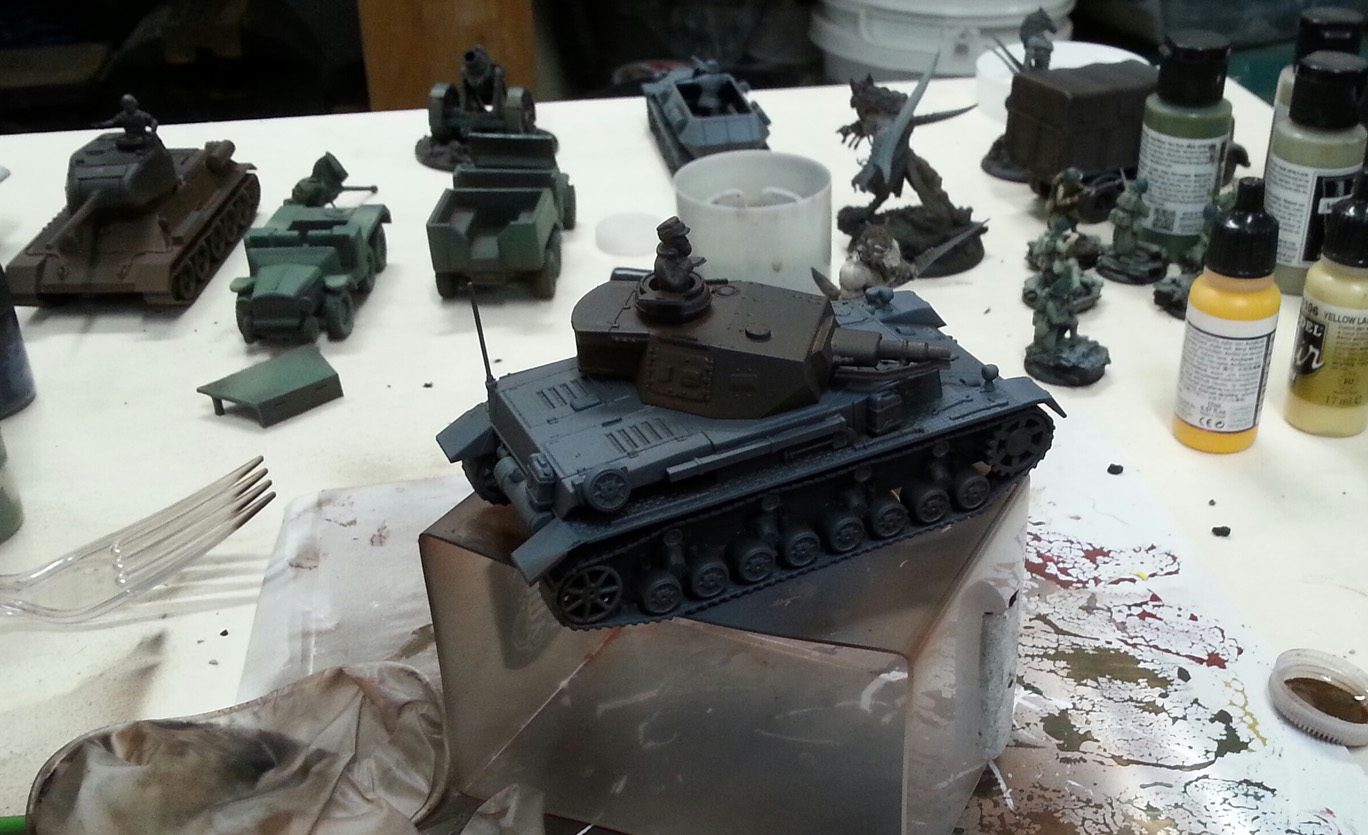 A similar process was done with the Opel Blitz truck.  You can already see the areas where the original brown was left in place, despite subsequent layers of lighter colors.

The advantage to having your first several layers of paint as primer is obvious.  Something like this will see a lot of rough handling, and there is no base or anything "safe" to grab.

This is how I am painting all of my miniatures lately.  I first came up with the idea a few years ago when I had to start painting a lot more vehicles without bases! 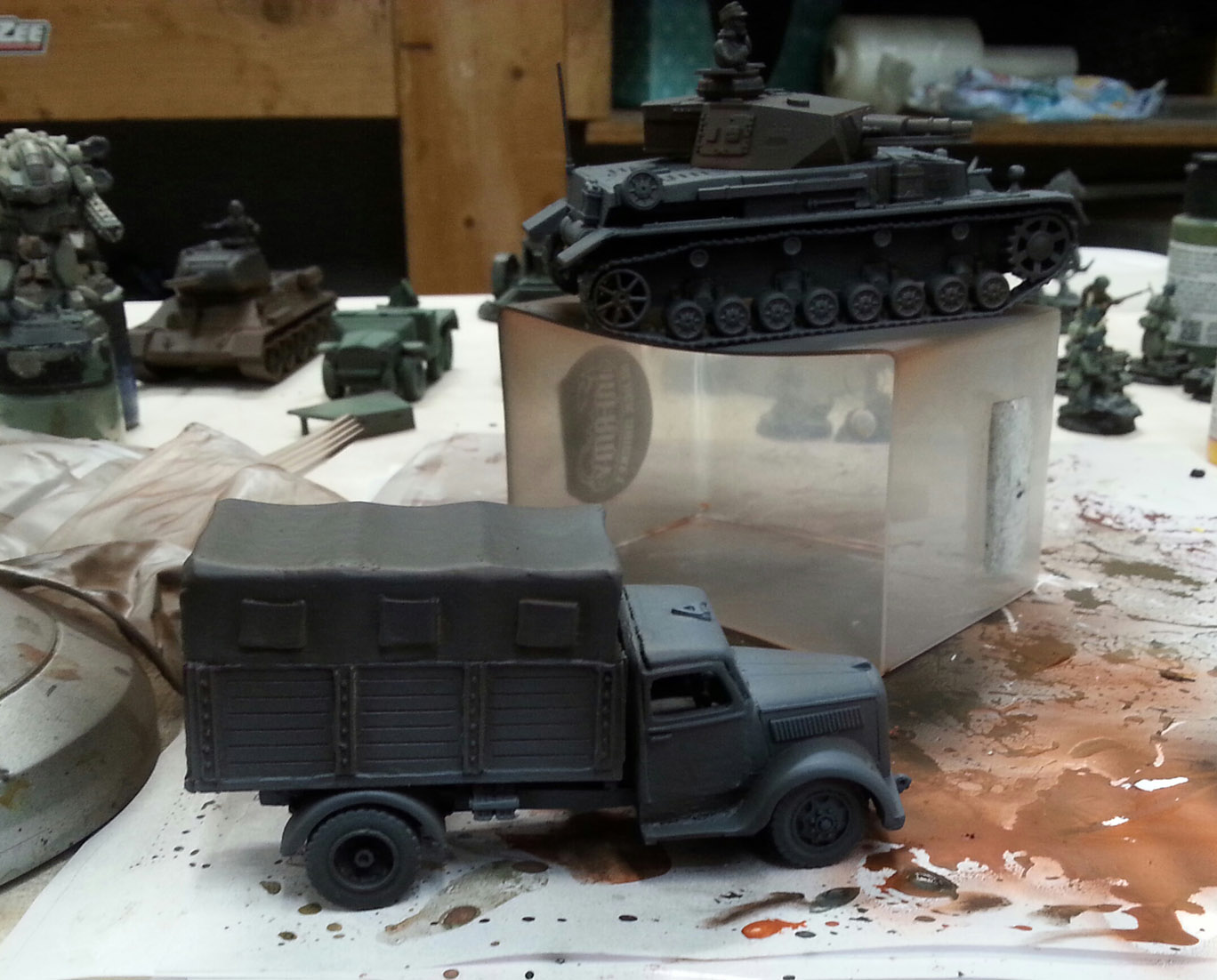 This is where I advance the next stage of the layer cake.  As you saw in the previous images, I had introduced grey primer to the mix.  Once I see that I have lightened areas up to that grey, white is added.

Just as with the orange/black mix, the grey will slowly transition into white, all by itself. 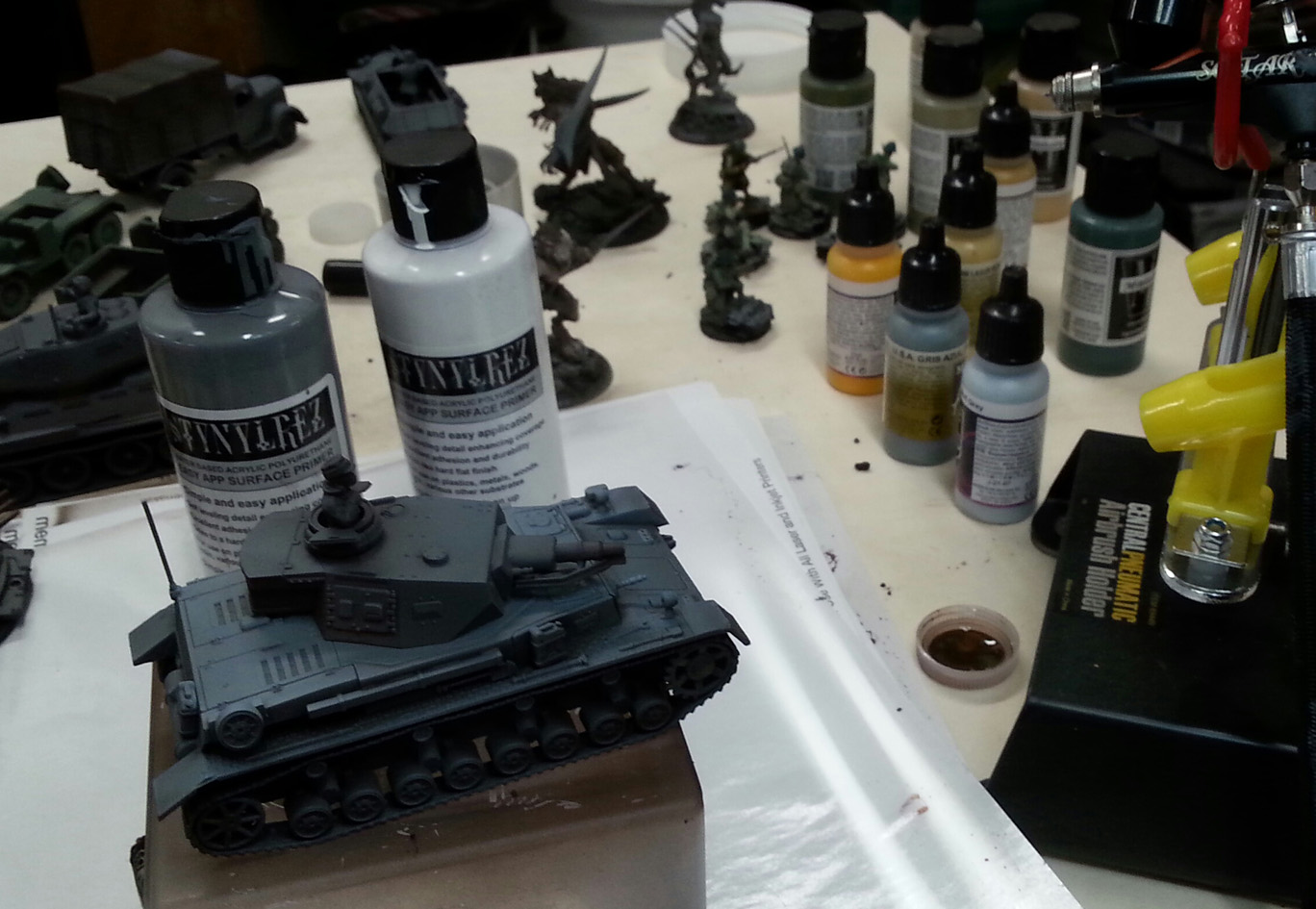 I think you can also see that I have a number of items out on the table at once.  This is the key element that makes this strategy work.  In fact, I normally have 3-4 times as many figures and vehicles on the table.

Doing so allows me to take advantage of all the primer mixing together in the cup.  If I was only working on one thing at a time, I would be cleaning the brush constantly and having to move on to the next color.

In this image, you can see that I have a few Bolt Action vehicles, a CAV mech from Reaper (they have a new kickstarter campaign under way, BTW!), and even an artillery piece from Victoria Miniatures. 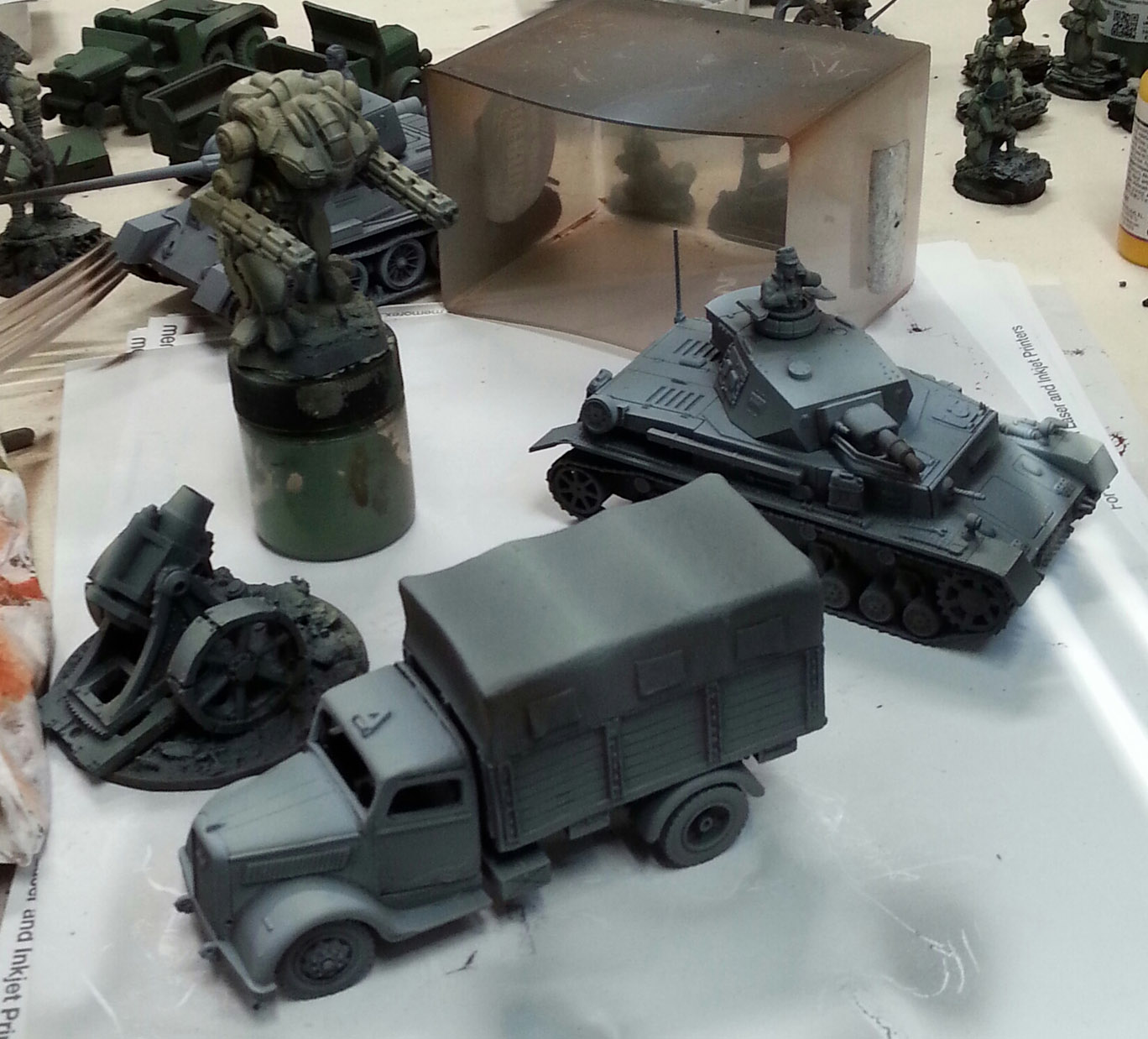 On each vehicle or figure that might need a given shade or color, I have that nearby so that I can advance some part of the shading.  At times that can be minimal, or most of the figure.  This is what makes it so important to have all these options out there in front of you! 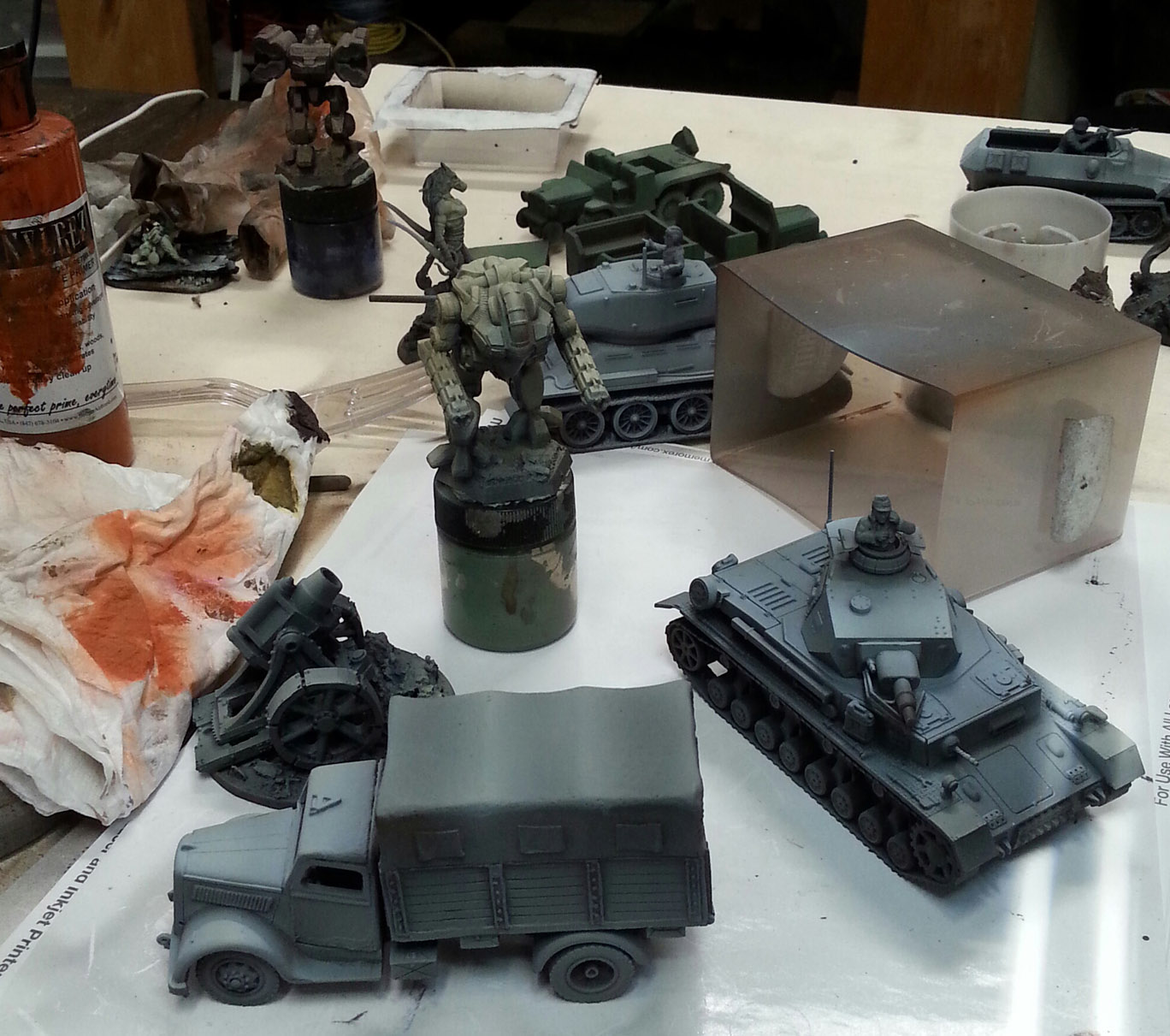 Once I get through the primer stage, I can start adding the more traditional paints.  In this case, I started adding greens to the Laffly trucks. 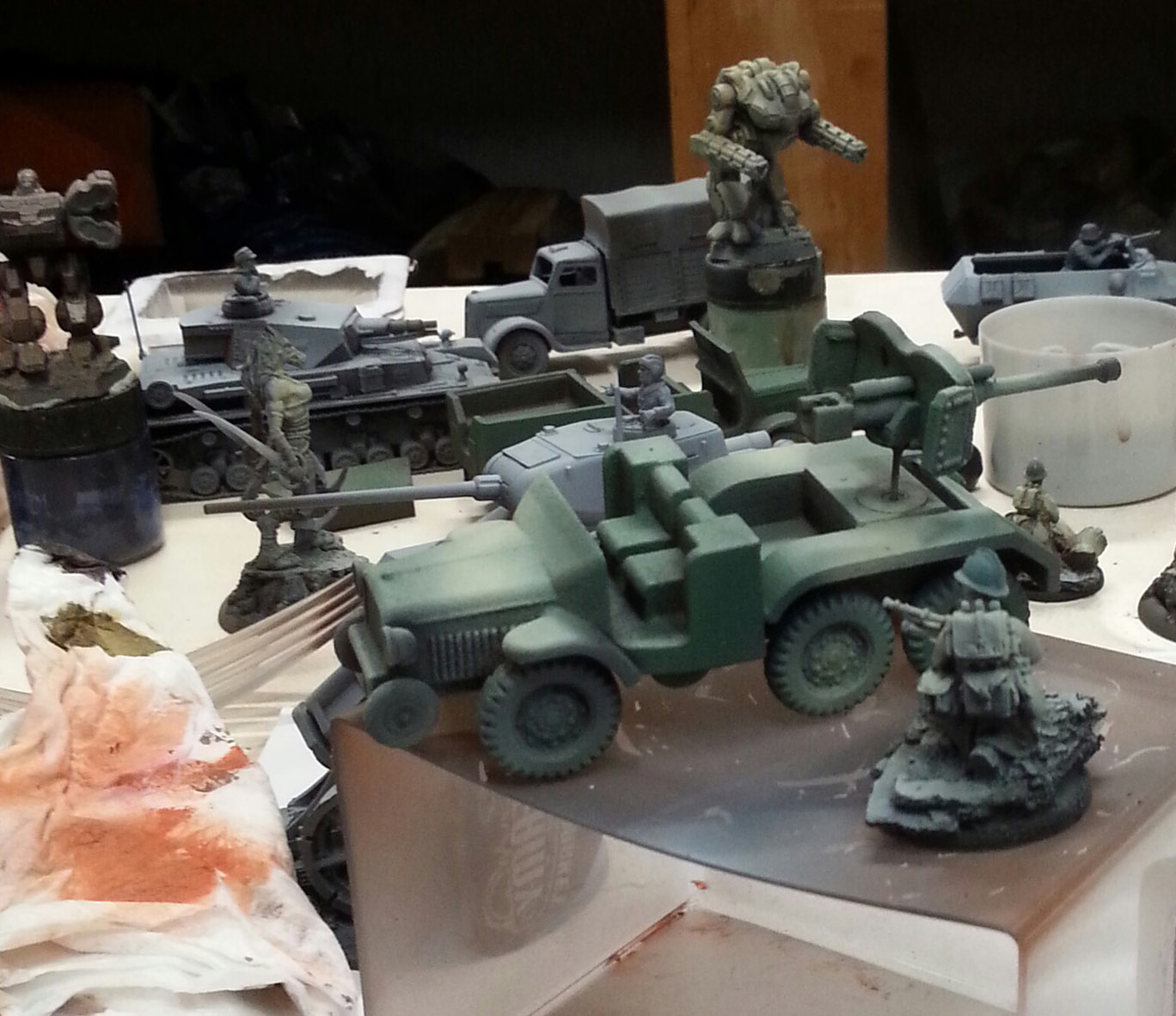 This is a good illustration of using what is left in the cup on something else besides the original target.  Holding the brush far away from the drive wheels on the Panzer 4, I was able to give it a dusting of color that once again pre-weathers the vehicle. 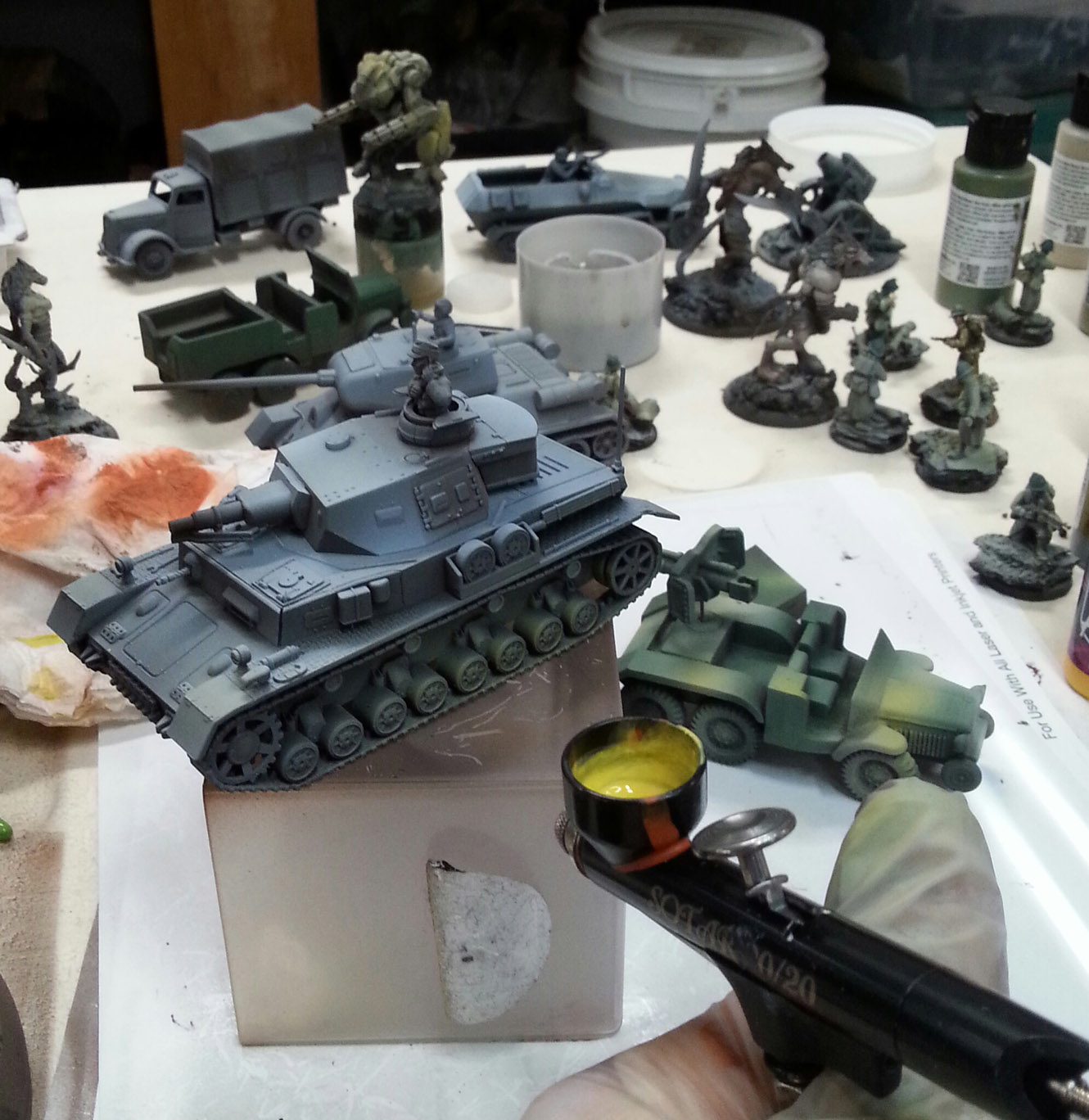 I added this yellow mix to a number of other pieces, such as the CAV mechs, the Opel Blitz and even the French infantry. 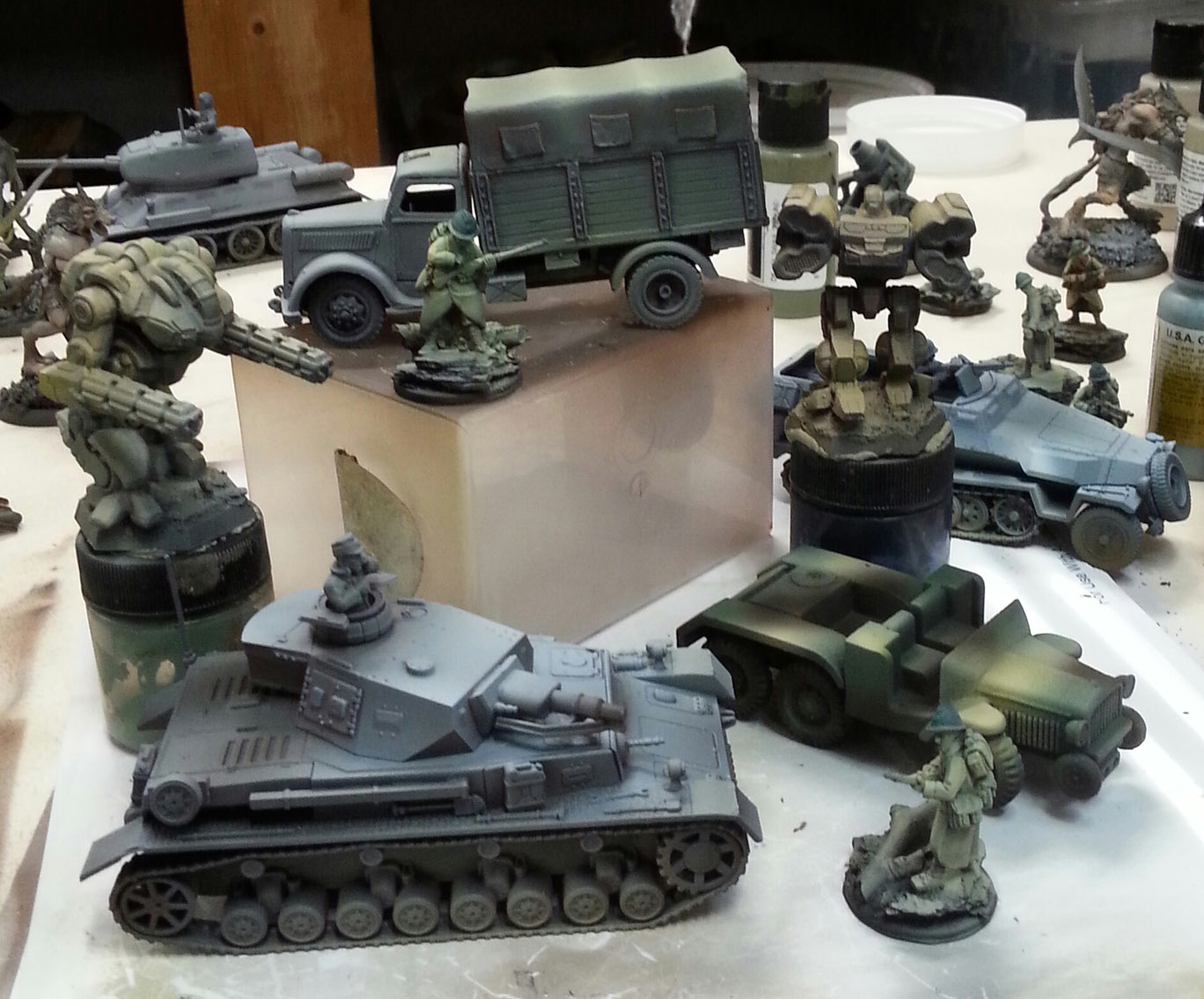 I should also mention that I was not masking anything.  Shading was achieved by turning the figure and the brush in such a way that the paint would only spray where I wanted it to go.

This is also like a chess match, as I plan multiple moves in advance.  Keep in mind that I am doing my usual "shaded basecoat" technique, where colors begin lighter, and are lightened further by glazing, shading and tinting.

I am also planning for all the weathering which will occur, and that will darken the appearance further. 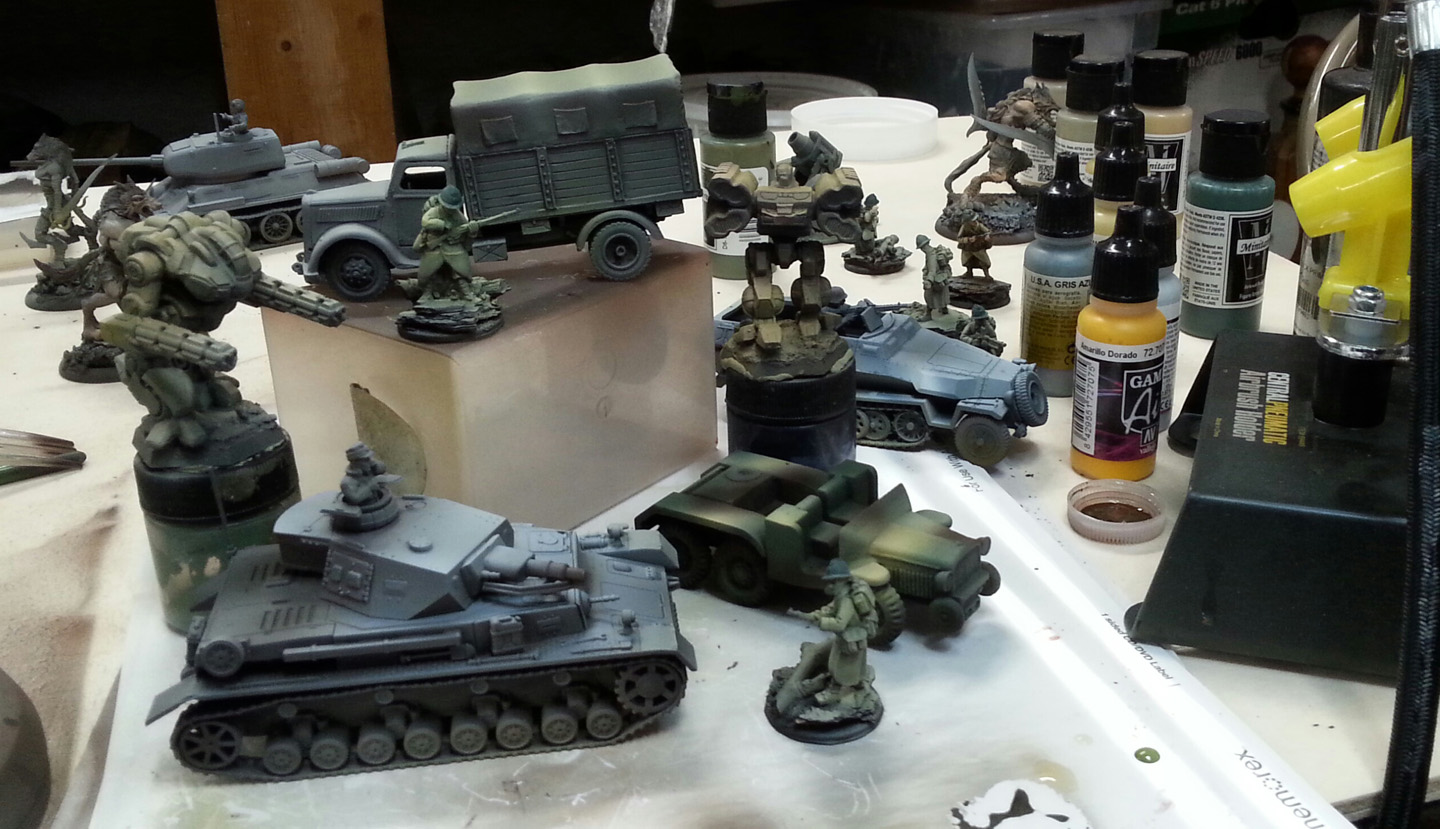 I don't want to have to go back into the highlights and mid tones too much after those later stages, so I have to compensate for that in these early rounds of painting.

Those of you who are familiar with my Shaded Basecoat technique will certainly recognize this pattern, and how light everything seems to be. 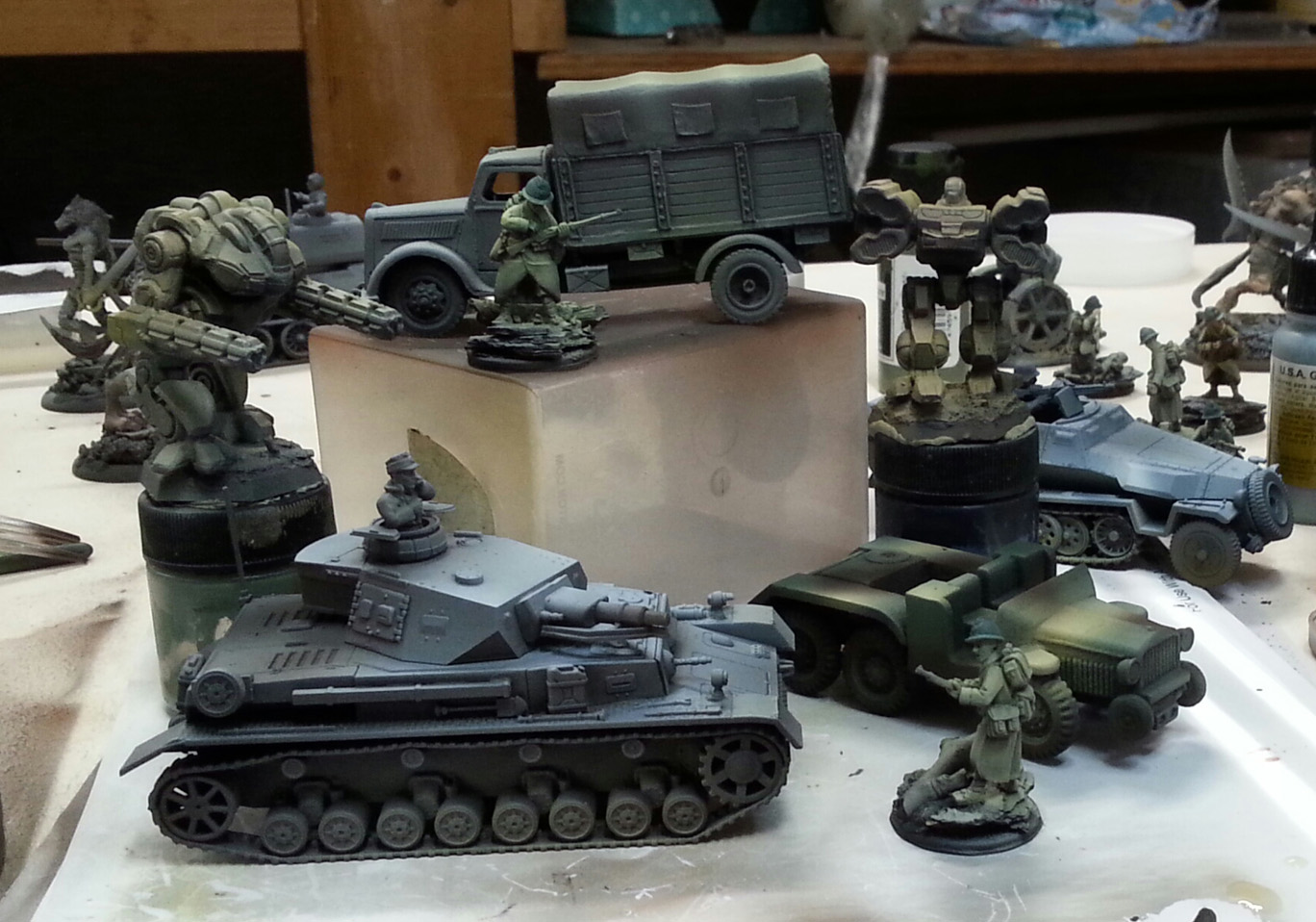 In this instance, I have simply exchanged one brush for another.  Instead of jamming a filbert brush filled with primer into all the nooks and crannies, I used the airbrush.

The tools are interchangeable.  When I did my 2D art, I used an airbrush for at least 40-55% of all my paintings.  Most people could not even tell I had used and airbrush by the time they were done. 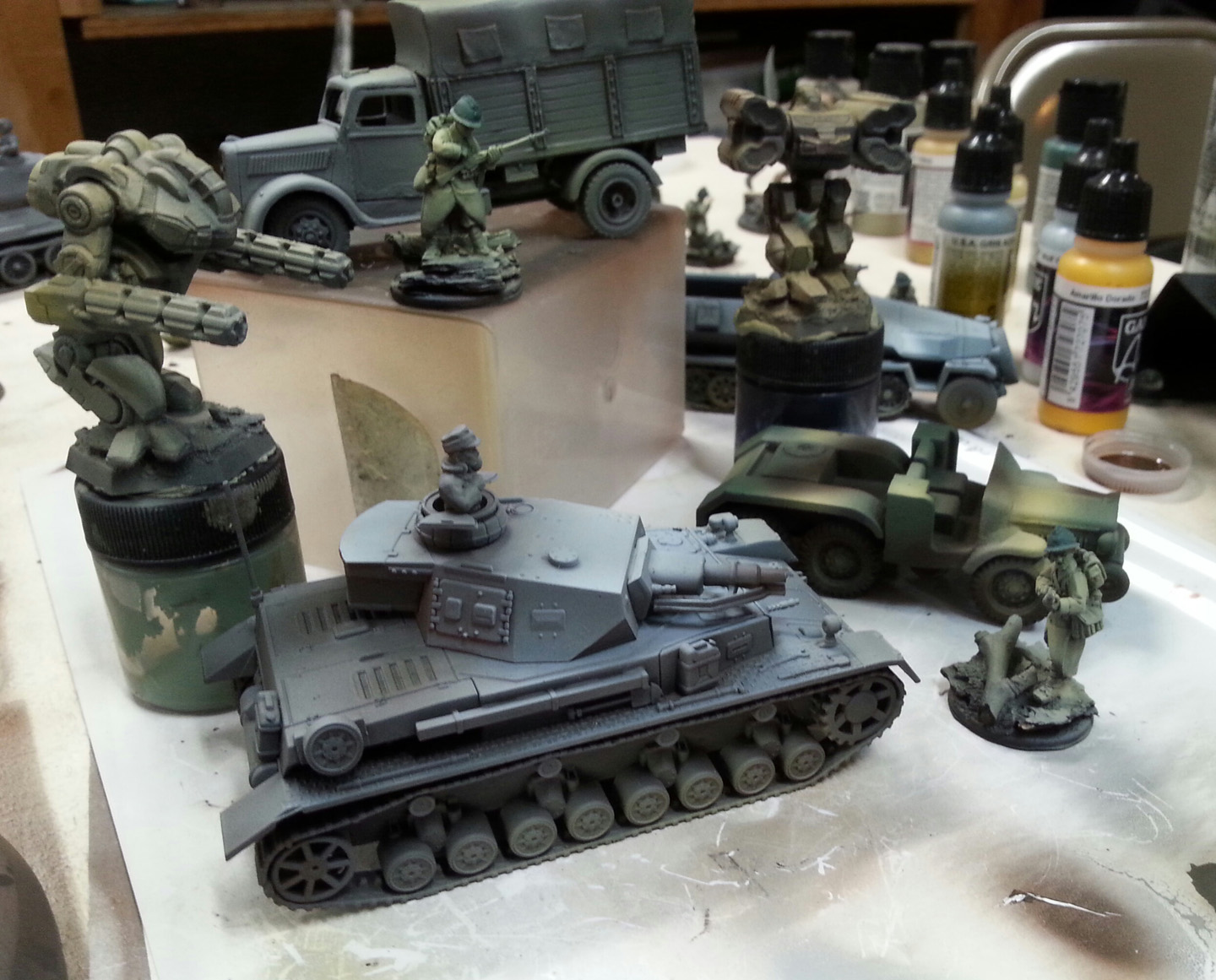