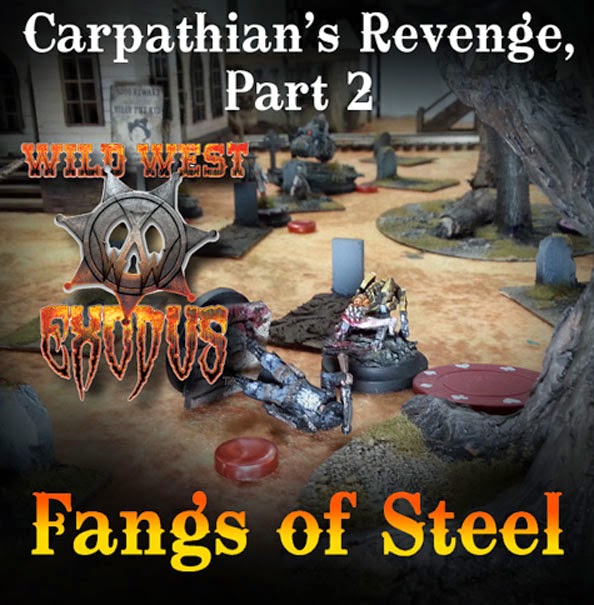 The invasion of the body snatchers continues!

When we last looked in on the intrepid Lawmen of Wappelville, they were anticipating the arrival of the heaviest Enlightened units.

The dust clouds betrayed the approach of the Ironhide and the Mercenary Buggy.

Apparently one of the replacement Interceptors had something wrong with its targeting mechanism... 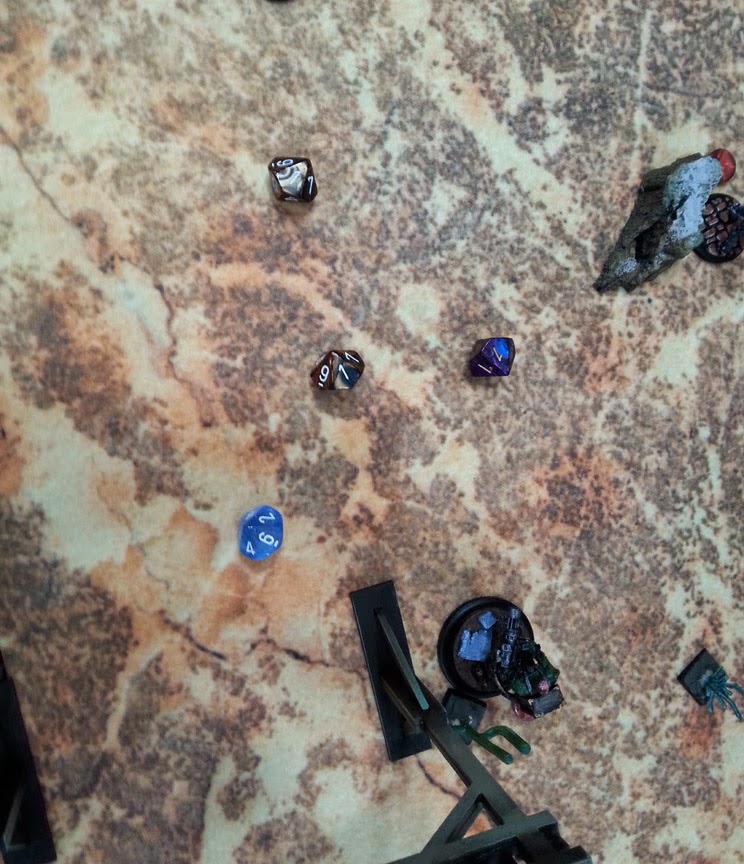 A move to outflank the Lawmen defending the Undertaker's establishment was met by a host of close combat Rangers, bolstered by two additional riflemen riding the rail cart.

A nasty surprise awaited the undead creatures in the Smokehouse... 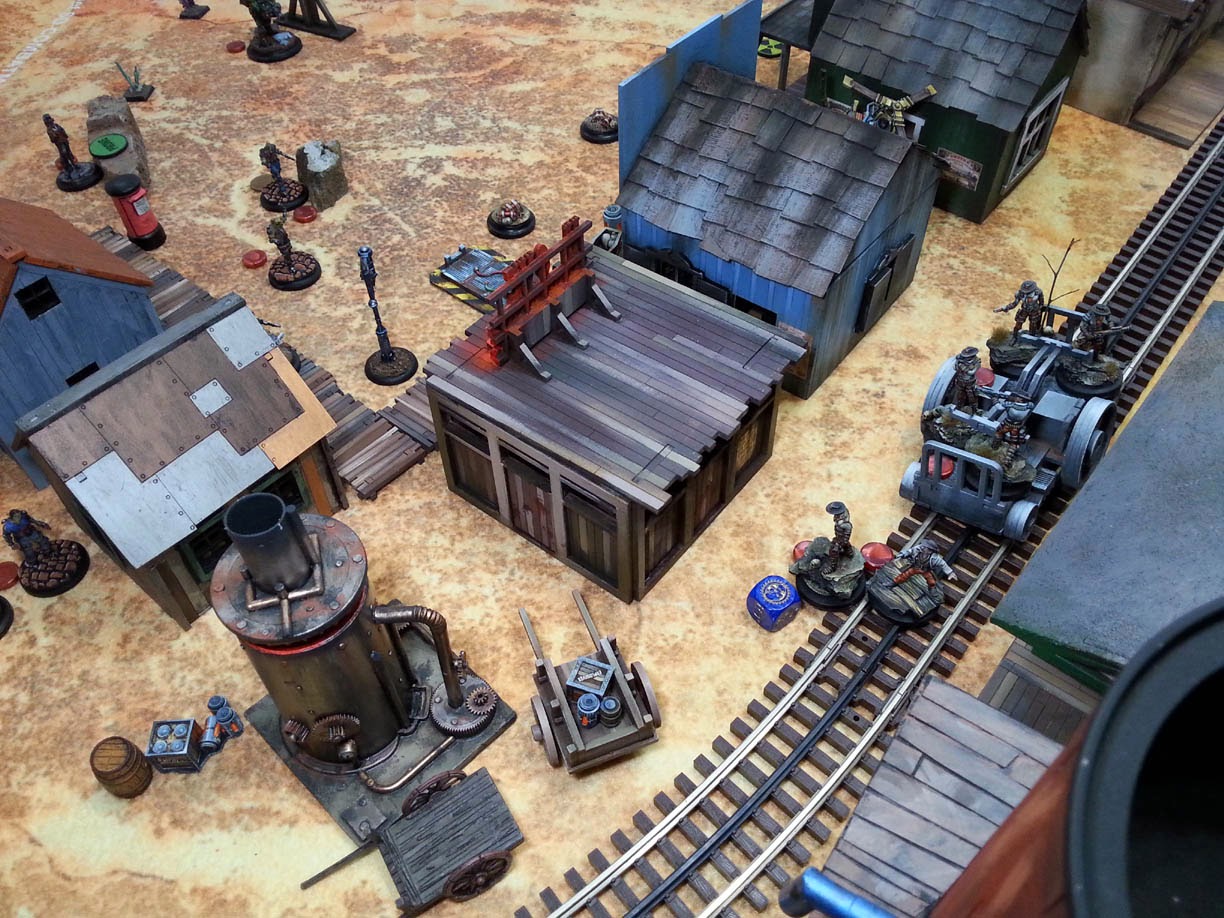 The Ironhide made a predictable approach to the target.  What the Lawmen could not know, however is what might leap out of it! 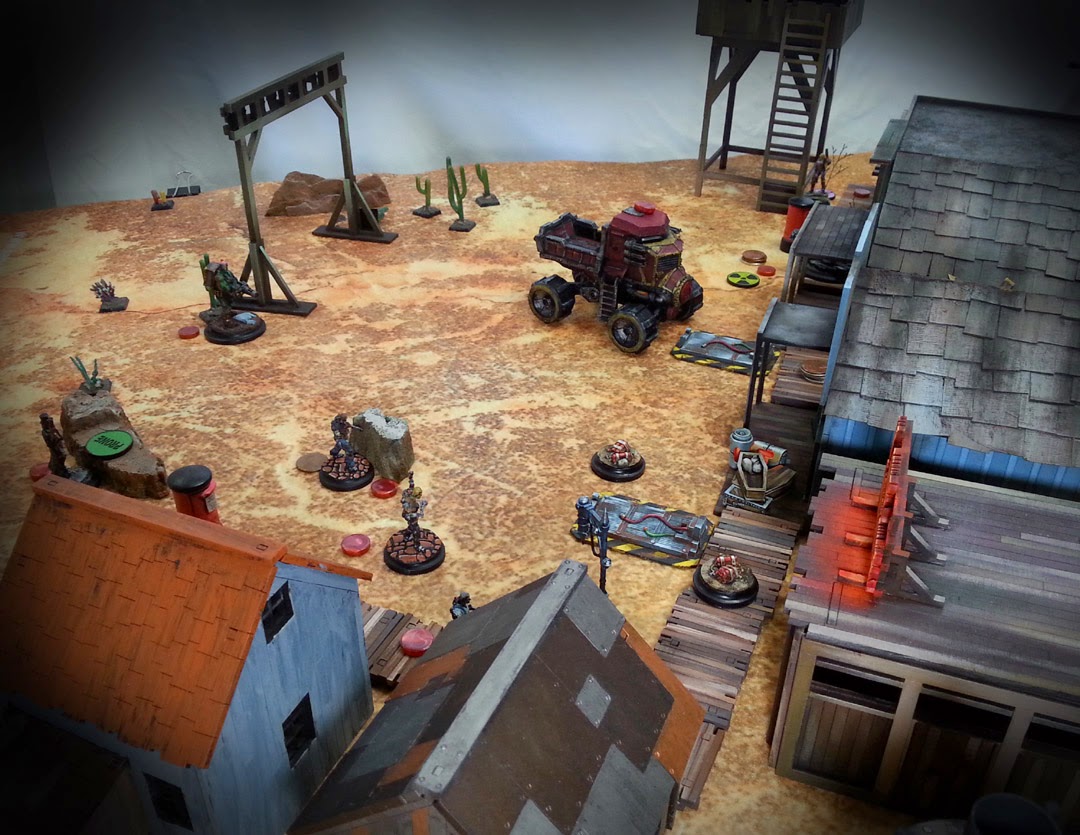 Thomas Tate Tobin claims his first victim!  One of the shambling abominations was cut down right away. 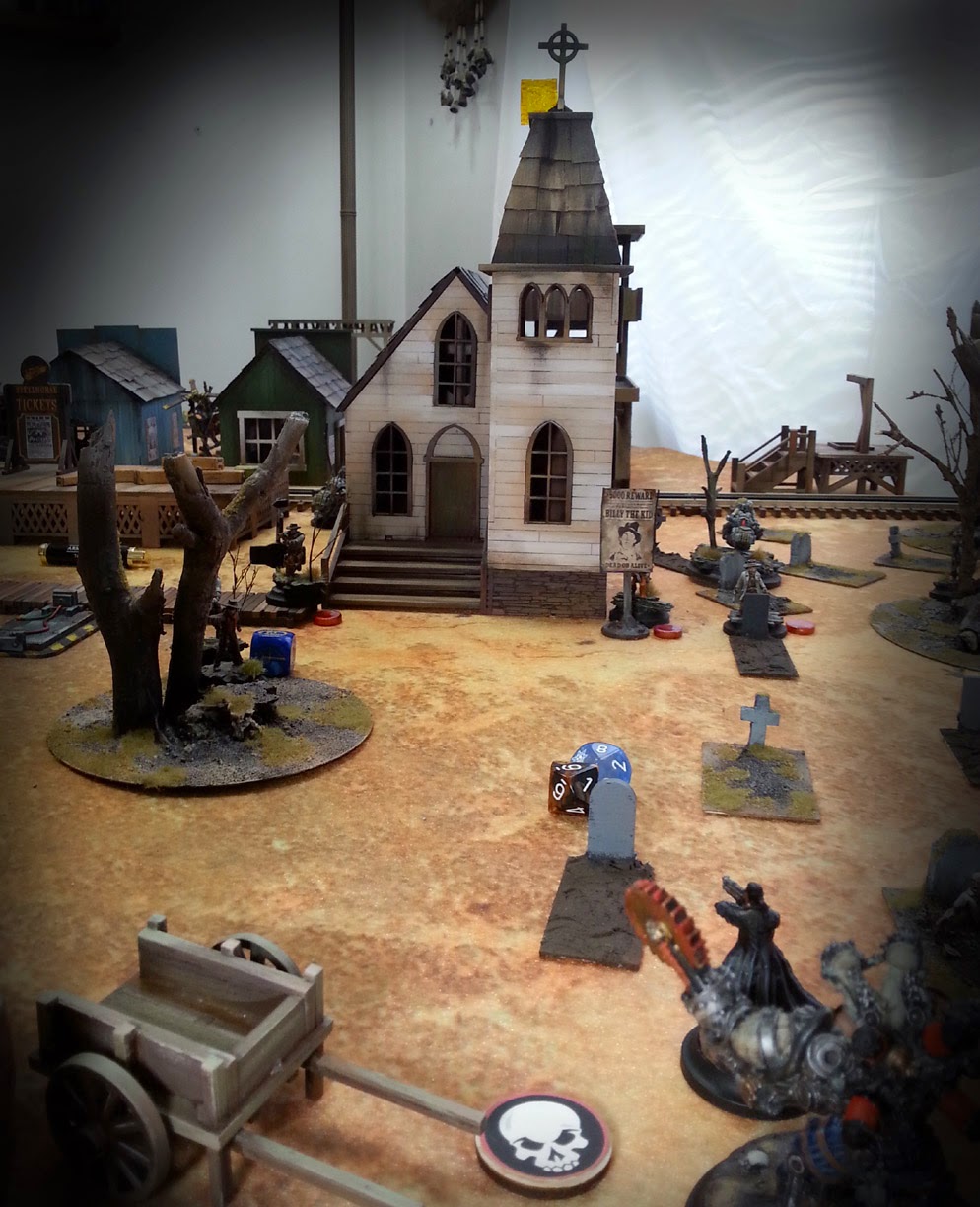 One of the ruined beasts that staggered out of the Ironhide wielded a massive shotgun, pouring lead into the Funeral Parlor.

A particularly brave Ranger engaged the sinister creation in hand to hand combat, so that it could cause no further harm. 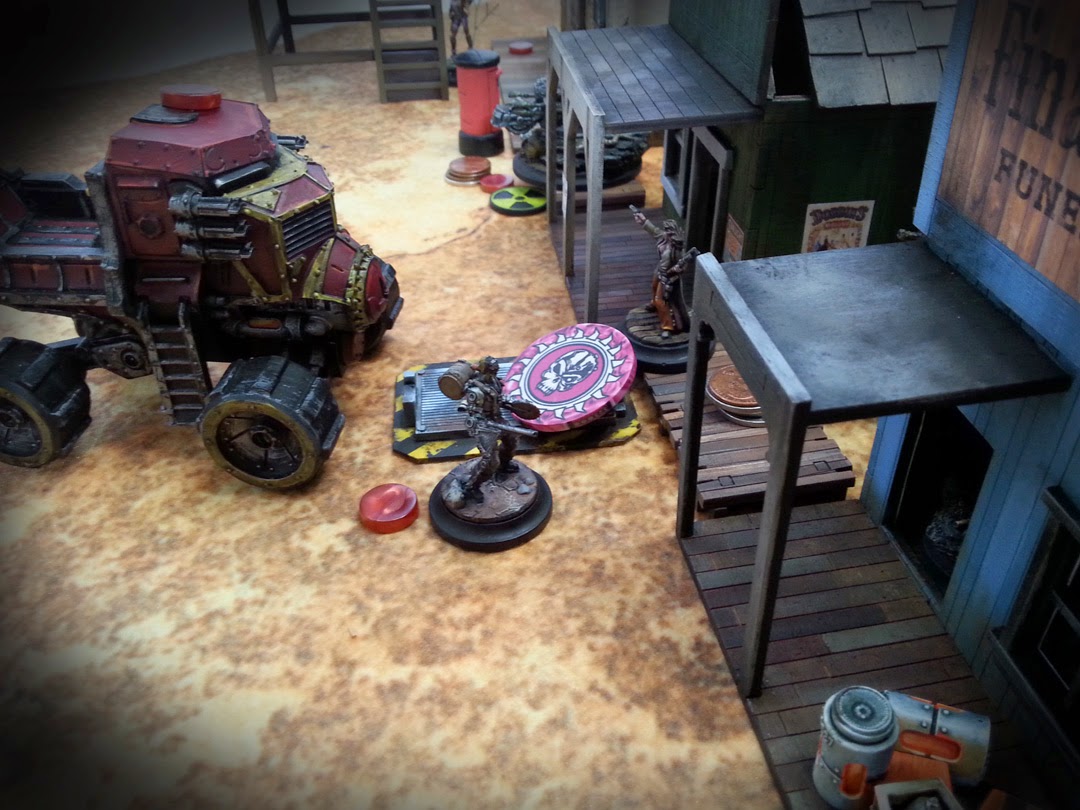 The Enlightened were able to utilize the Mercenary Buggy to outflank the defenders near the water tower.  Would this spell doom for those defending the church graveyard?

Wyatt had assumed that the main thrust would head for Billy's corpse, so there were fewer heavy Lawmen units in that section of the fight.  What rode inside that speeding vehicle might tip the balance... 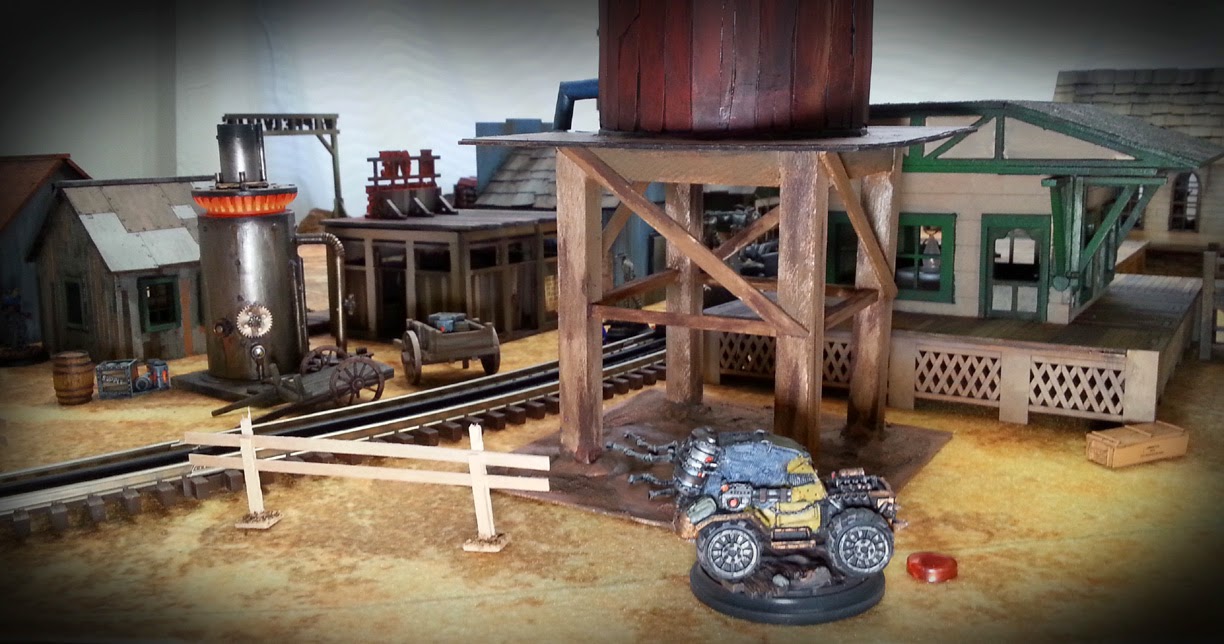 You can see that the aforementioned Enlightened advance was building, and they stood at the cusp of activating the graves around the church!  Fortunately, two Interceptors were now in position, and a group of Rangers had spread out from the church.

These Rangers were taking positions around the great stumps of trees, and the headstones closest to the church. 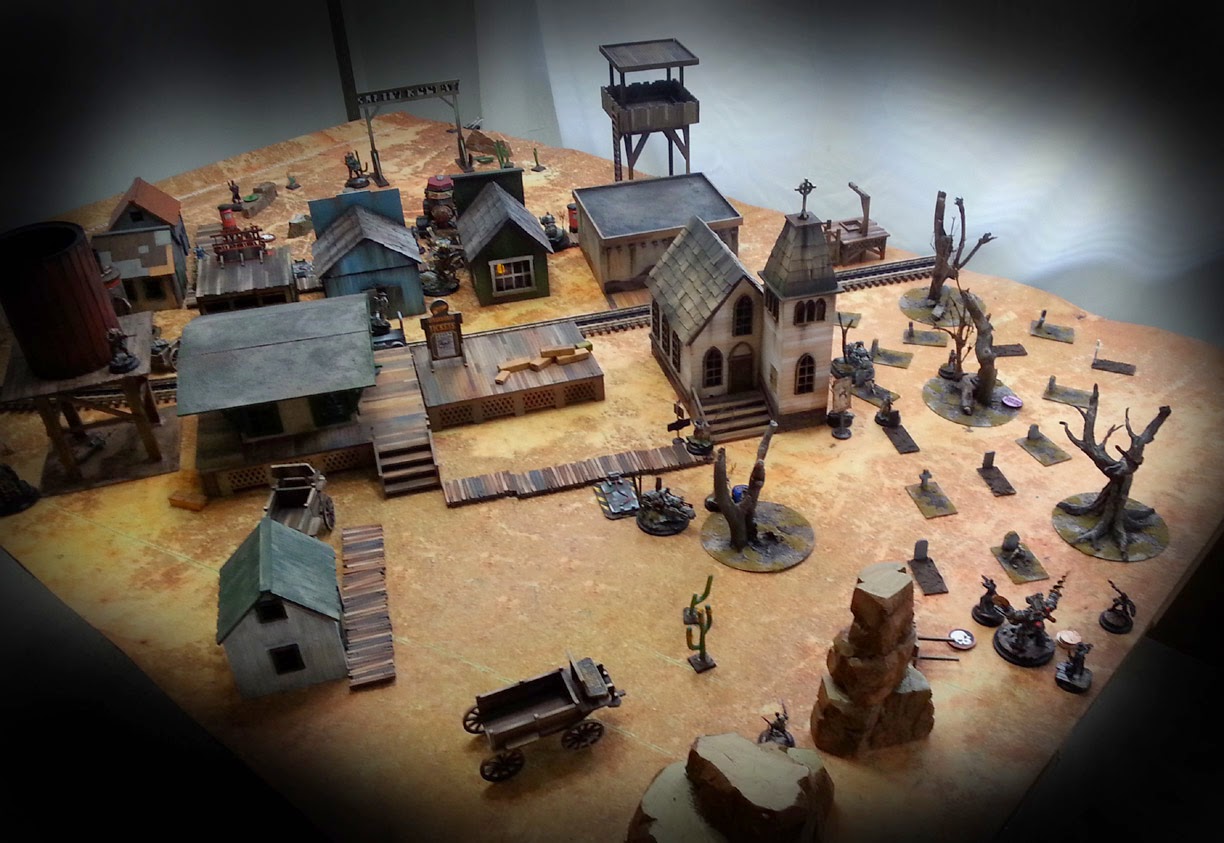 At the same time, the assault on the Funeral Parlor became even more furious.  Some of the mines placed in front of the building had been taken out, and young Edison continued to jump out of the Ironhide, irradiating one Lawman after another!

Despite the loss of more and more of the blasted creations, Carpathian was able to keep up this furious action with even more terrible minions. 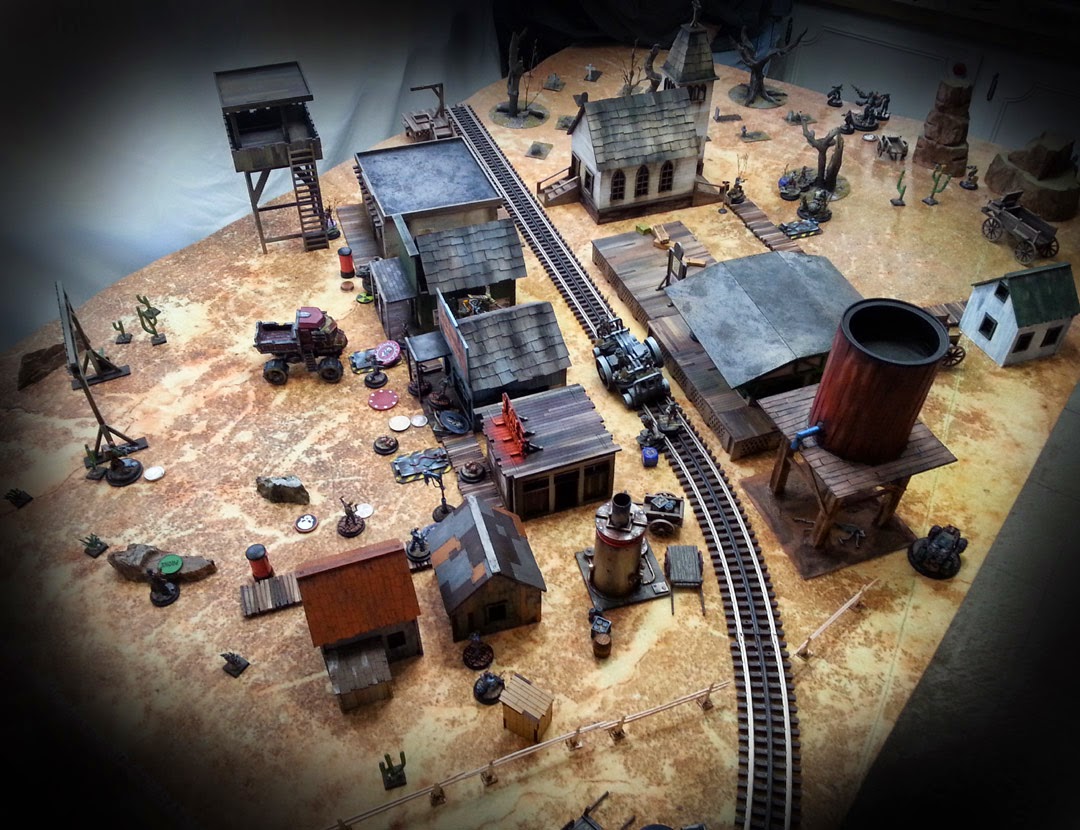 It was at this point that Hercules II leaped out from the Smokehouse and savaged a number of these fiendish beasts.  One by one succumbed to the steel fangs of the K-9.

This allowed the Rangers to close in from behind the Smokehouse, threatening Carpathian himself! 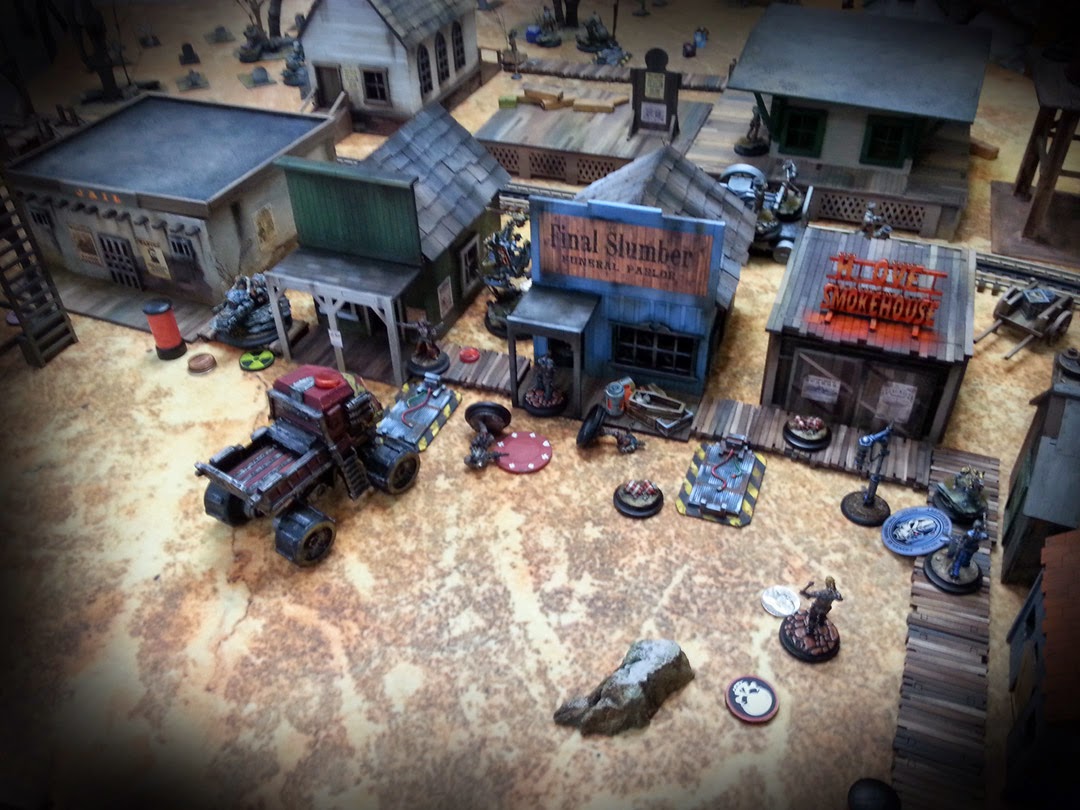 Each time a reanimated monster was taken down, another took its place.  The Lawmen were increasingly hard pressed.  Each time one of them moved to engage the creatures, Carpathian would blast them from his hiding place.

Obviously he is not accustomed to a straight up fight! 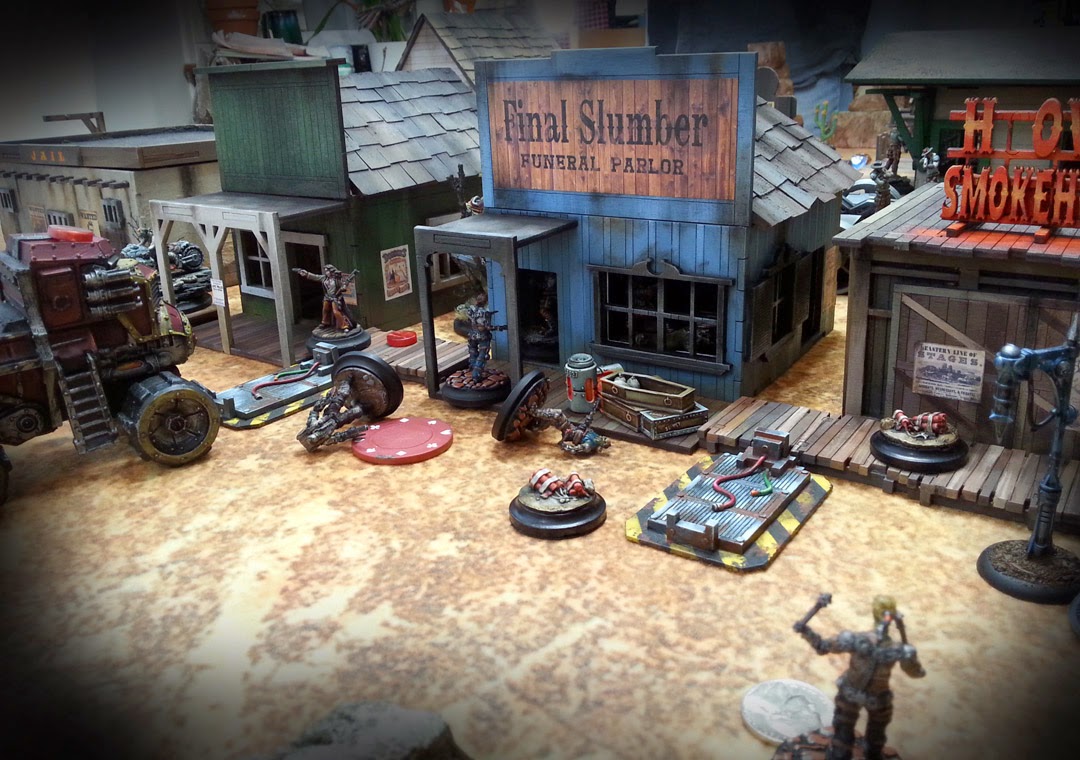 Both sides were now mere inches from each other.  The Rangers could easily smell the wretched things as they moved into the graveyard.

However, only the living could bring the dead from the graves, and the Lawmen carefully focused their attention on them.  The Kauffman brothers and the Wraith suffered wound after wound... 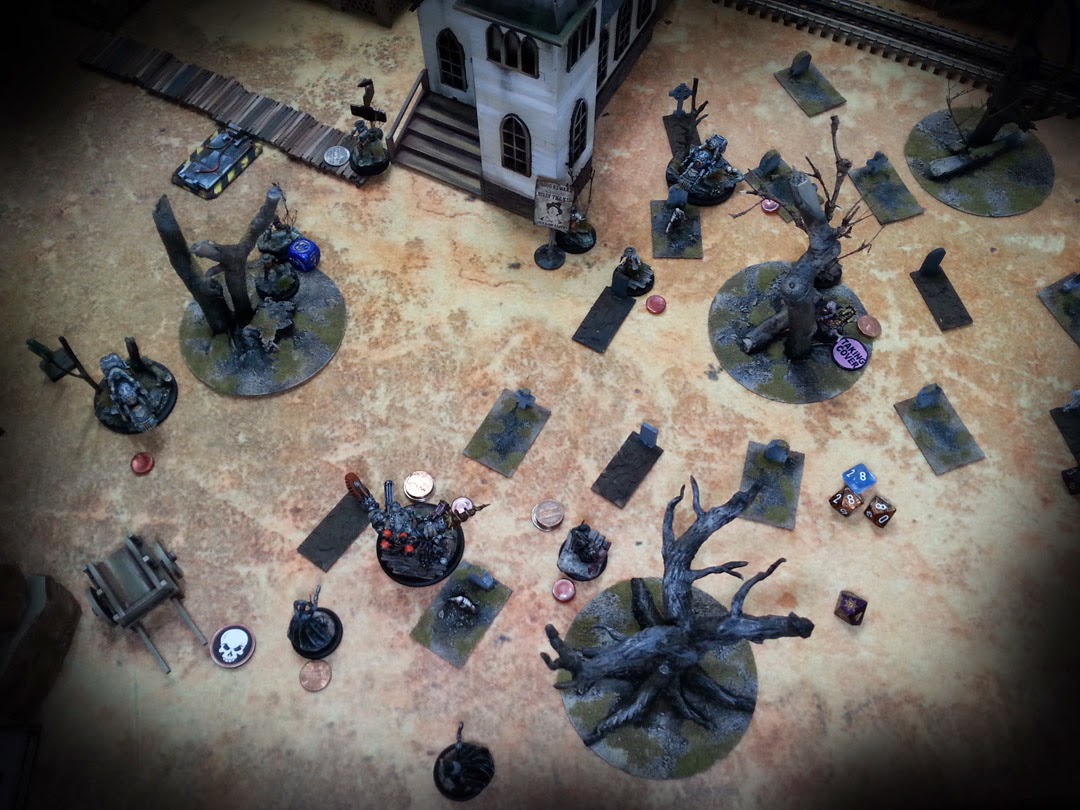 A torrent of fire from in and around the church savaged the invaders.  This also helped to cover the advance of yet another K-9.  You can see him crouching behind the tree stand on the right. 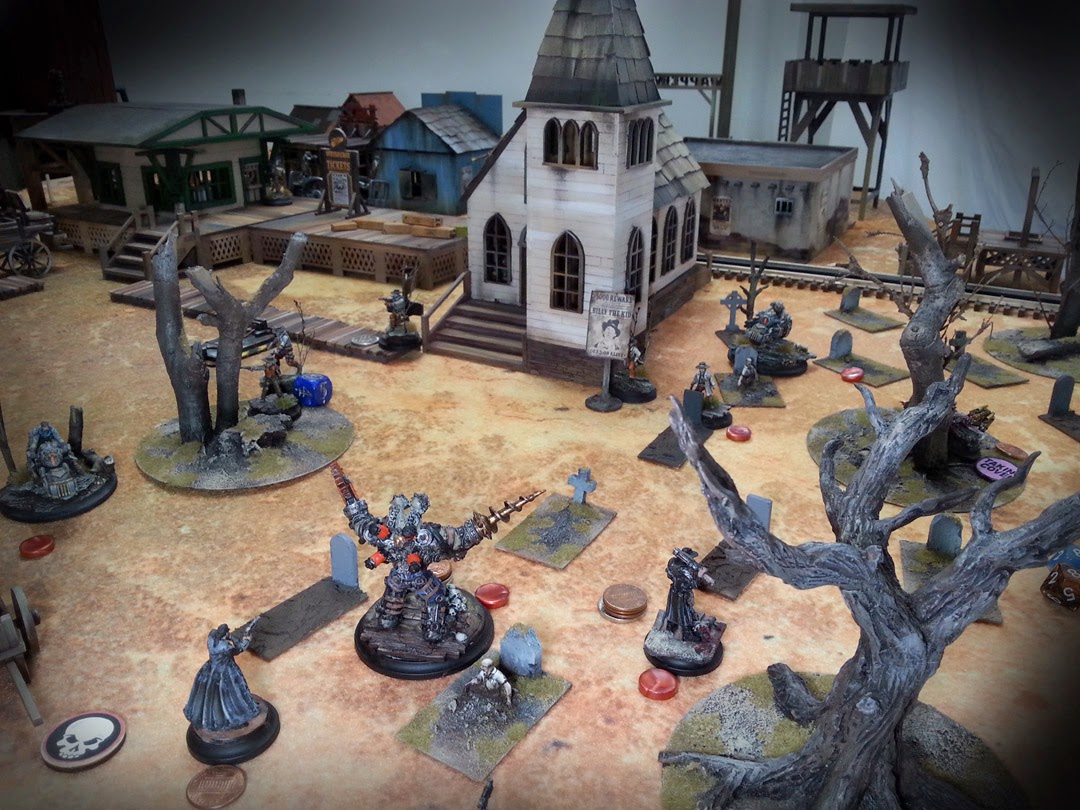 The Wraith had influcted a great deal of harm on the implacable Rangers, and nearly destroyed the K-9 as well.  However, the Steel Fangs would bring down the evil minion of Carpathian once and for all!! 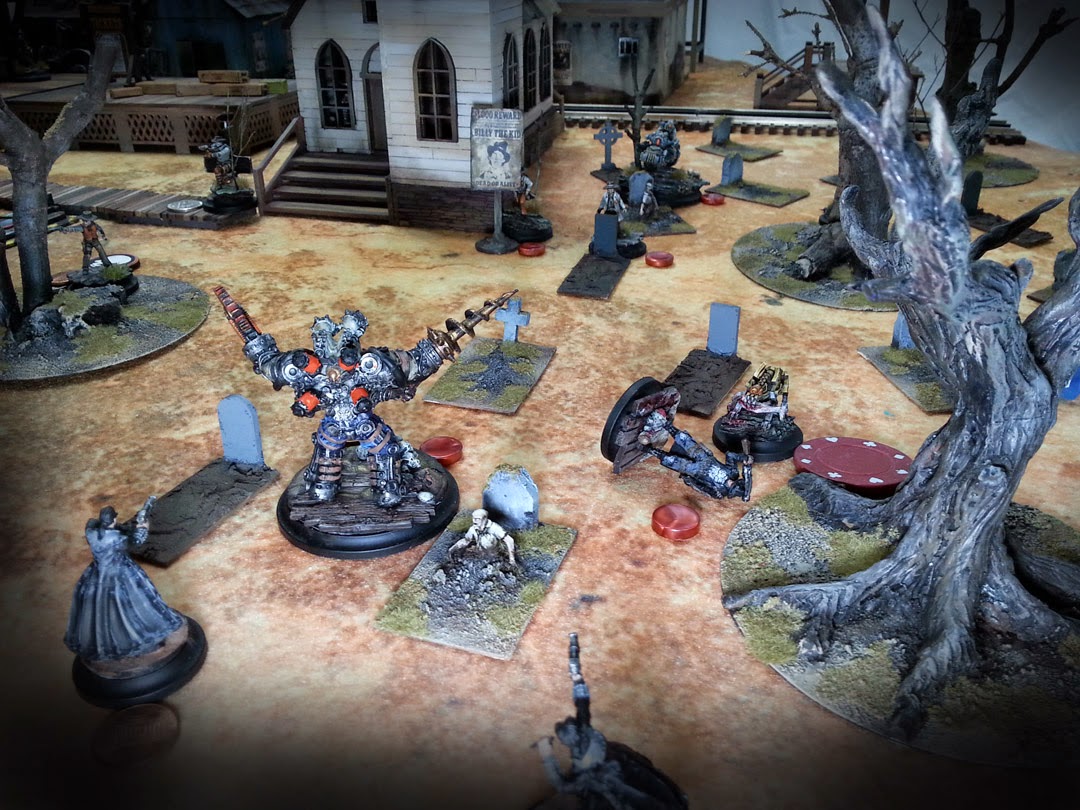 The soil above the graves was stained red as Archimedes tore through the flesh of his victim.  Even nearby headstones became unreadable as the blood and gore obscured dates and names alike.

Would those dearly departed lying beneath that soil eventually become more foul creations of Carpathian?  Find out in the next chapter of Carpathian's Revenge!! 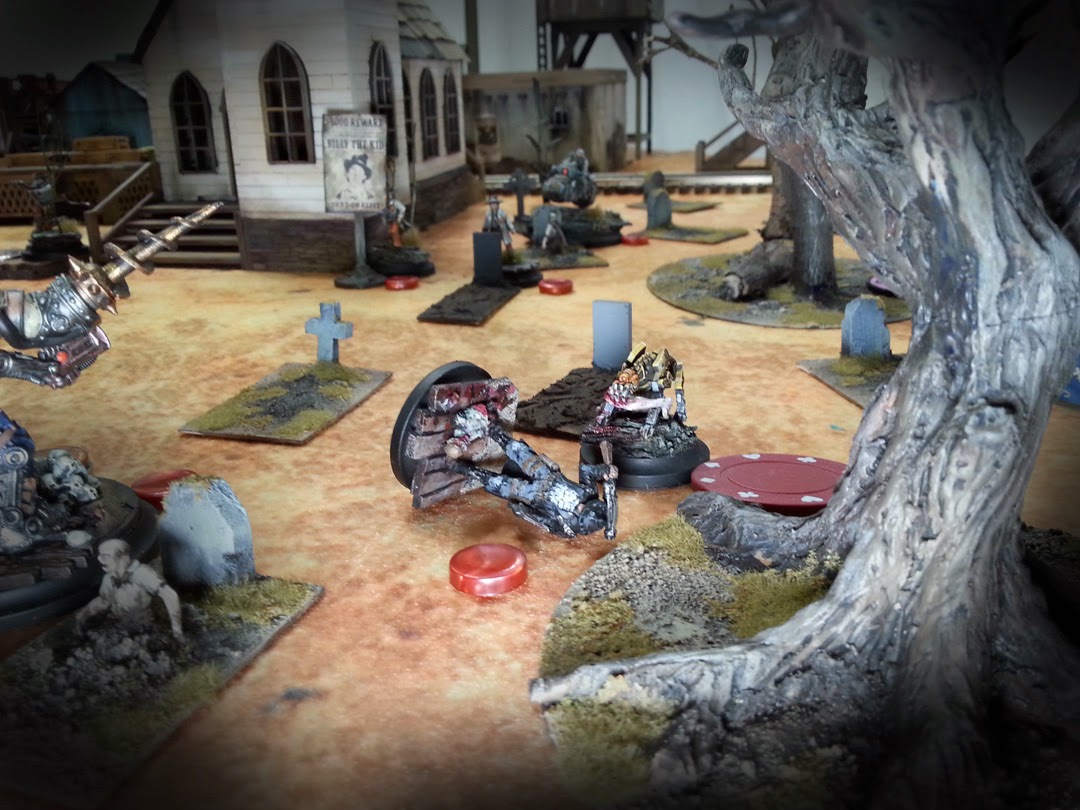 Posted by wappellious at 1:57 PM No comments: 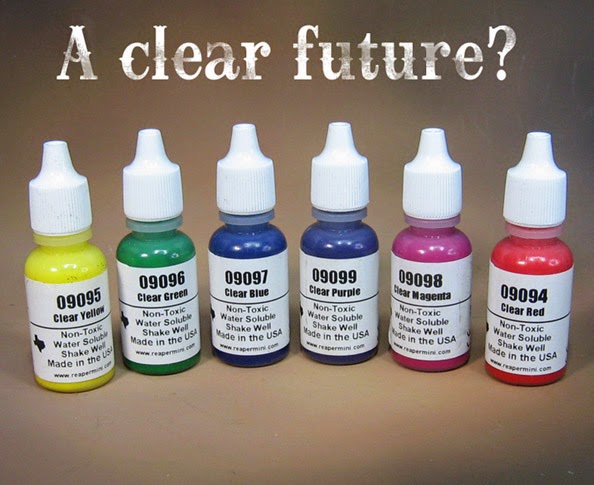 Working from my experience of last year's Reapercon, I learned that I could use the time before and after classes in the Main Hall to supplement what was done during those classes.

Time is always too short, and it seemed like continuing the lessons downstairs would give folks a way to apply what they had just been taught in a more controlled and supervised environment. 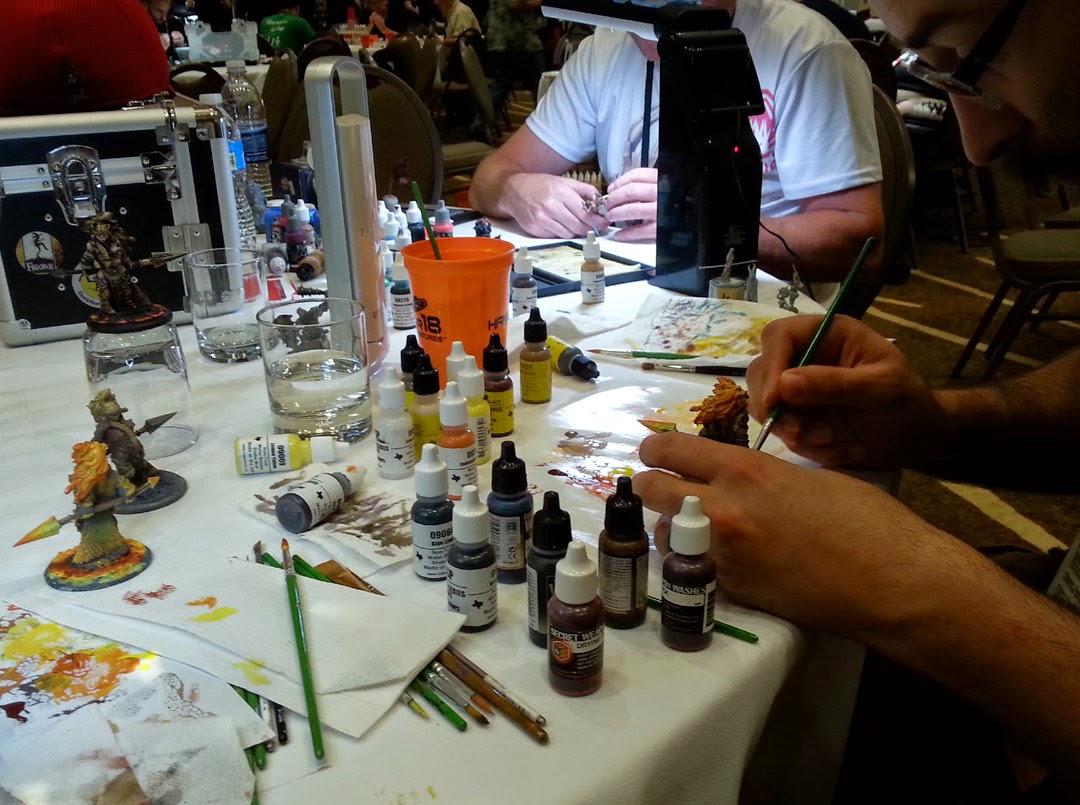 A number of "spot demos" and other learning events took place in the tables spread out through the Main Hall.  Since Reaper works so hard to have power at each of those tables, it makes this prospect even easier!!

In this example, we tried to examine a new take on the fire giantess, exploring the advantages of the Shaded Basecoat. We grabbed a few paint colors from the rack, and set about turning our semi Shaded Basecoated figures into "Baberogs"... creatures made of lava.  Like a Balrog. 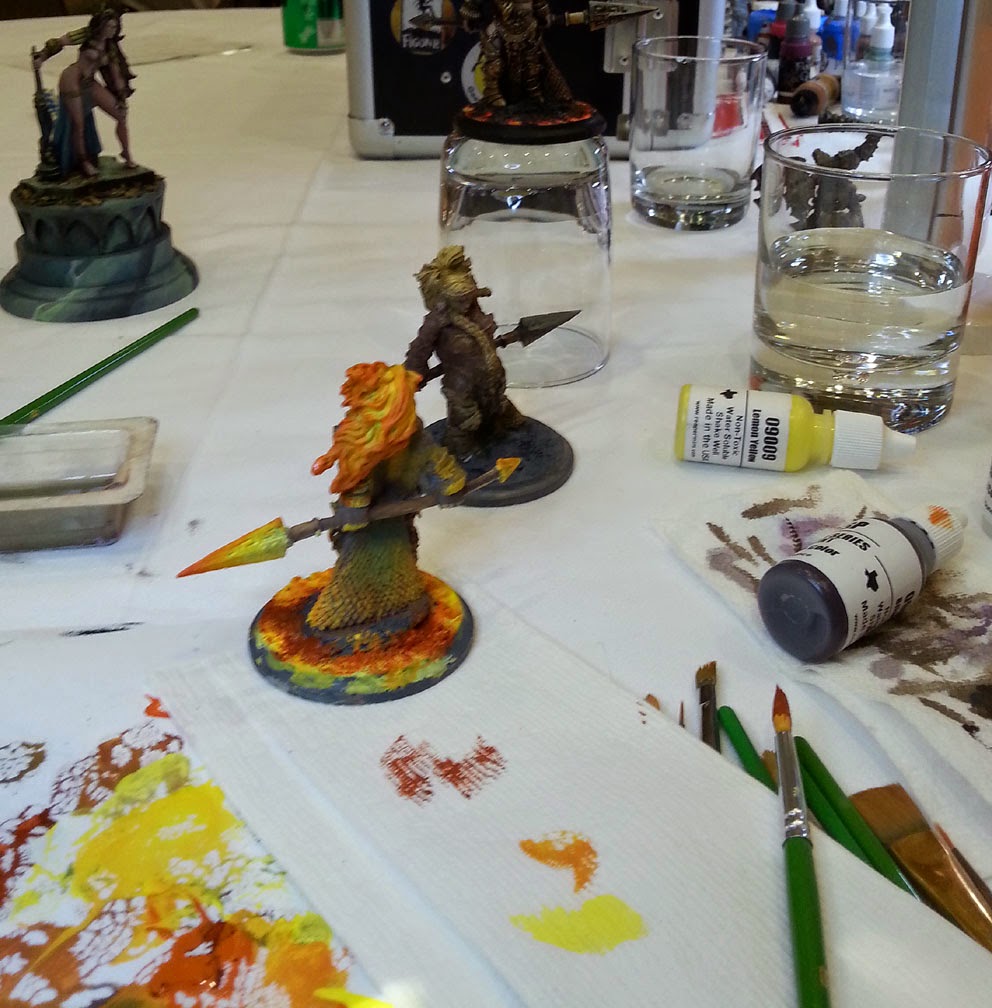 It didn't take long to reverse course and start adding very light colors.  These would be the base of the hottest areas. 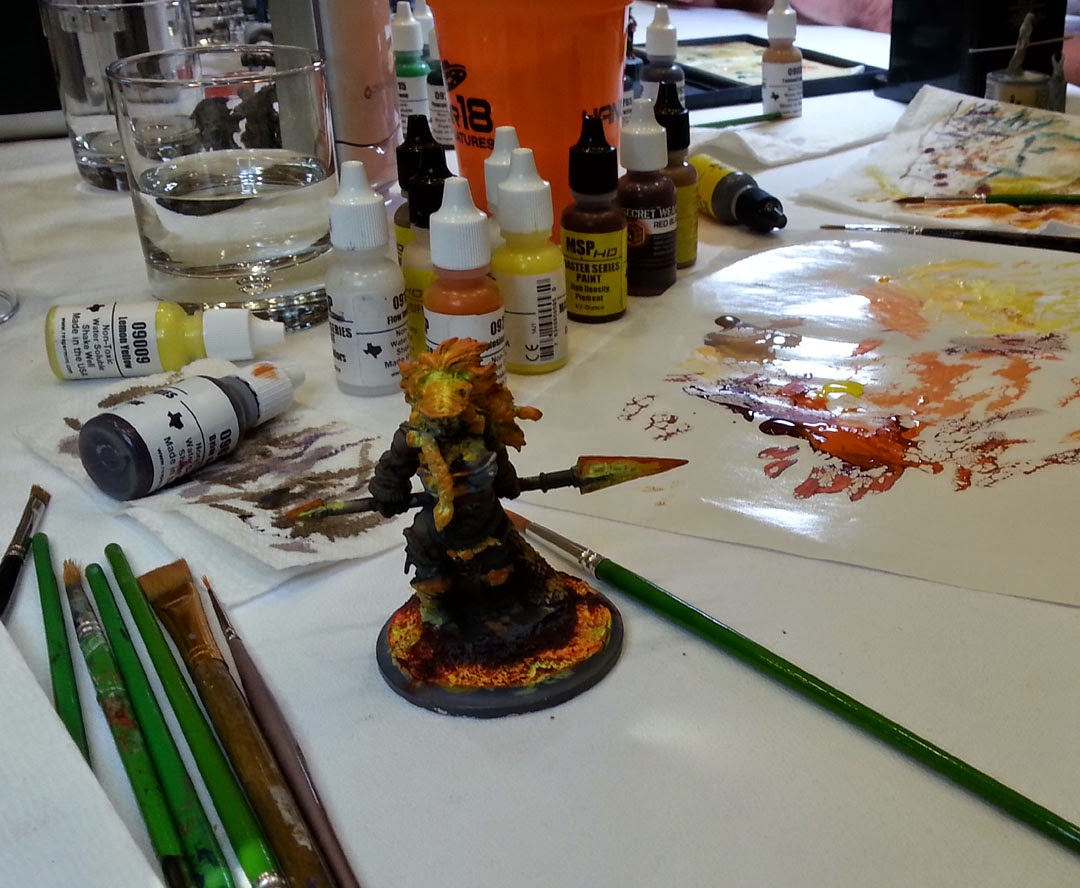 A new Wappellian (and fellow baseball fan), does some very nifty brushwork on his giantess, which you will get a better look at later on. 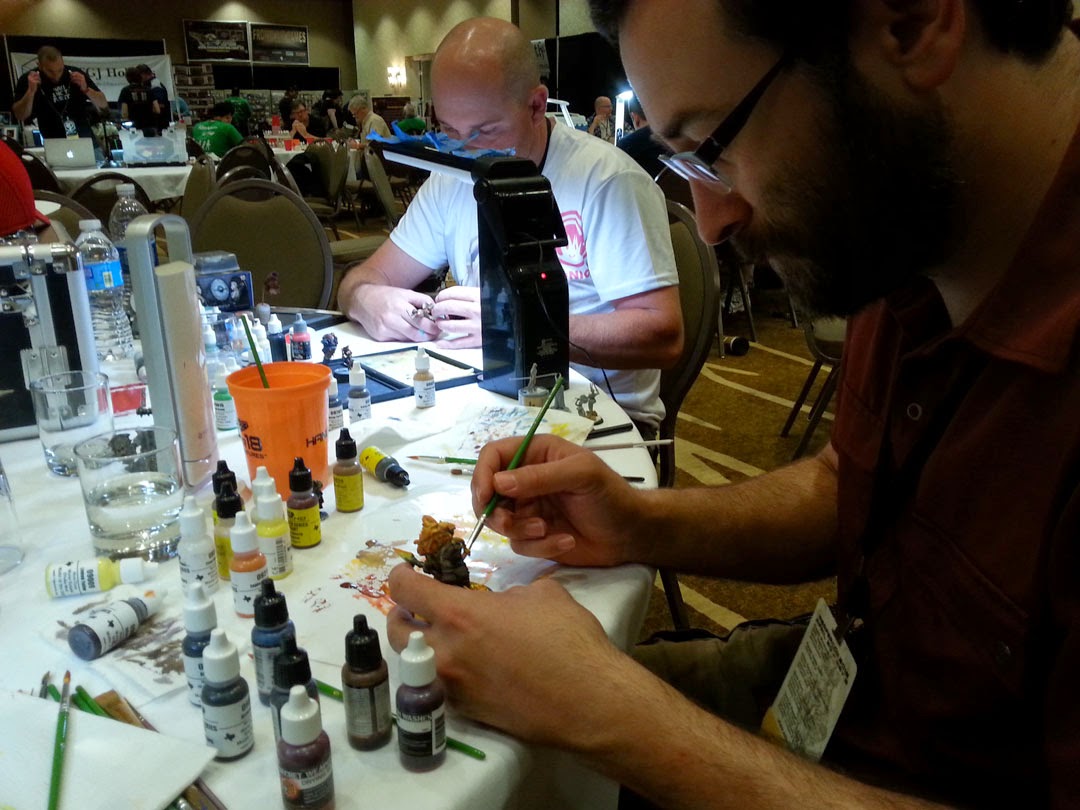 While we didn't have the fluorescent paints, the Reaper clear colors helped us to create some nice translucent heat effects.

This would plant some seeds for future possibilities. 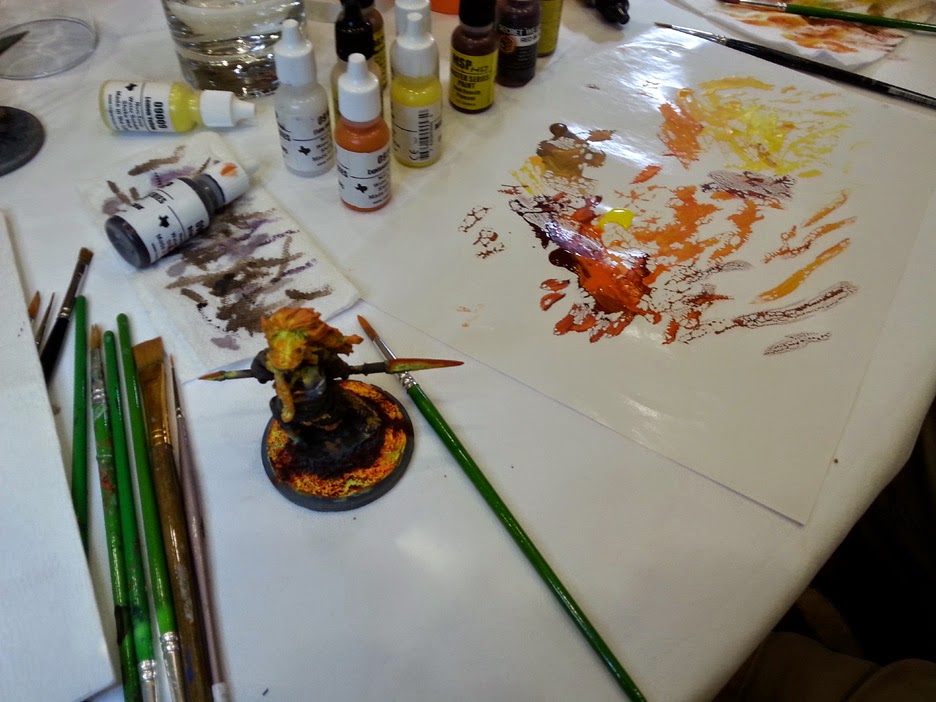 Work continues on both the base and the figure, getting darker each time. 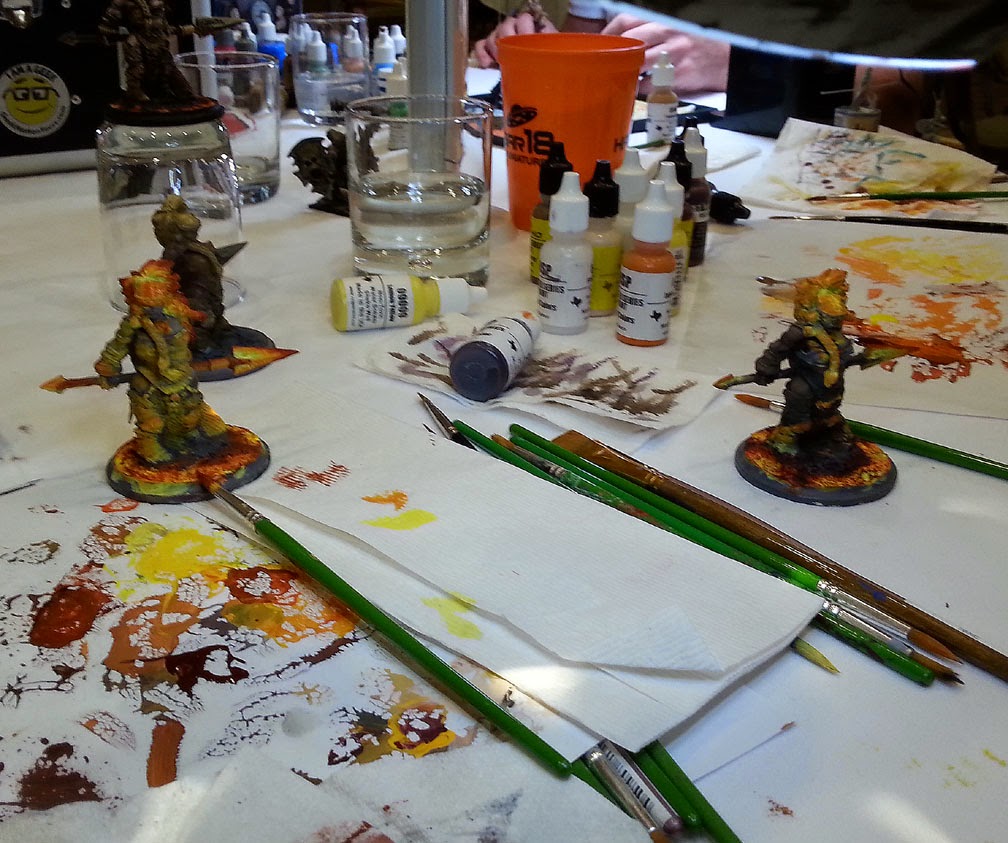 Side by side!  The hair, lava and weapon are really taking shape! 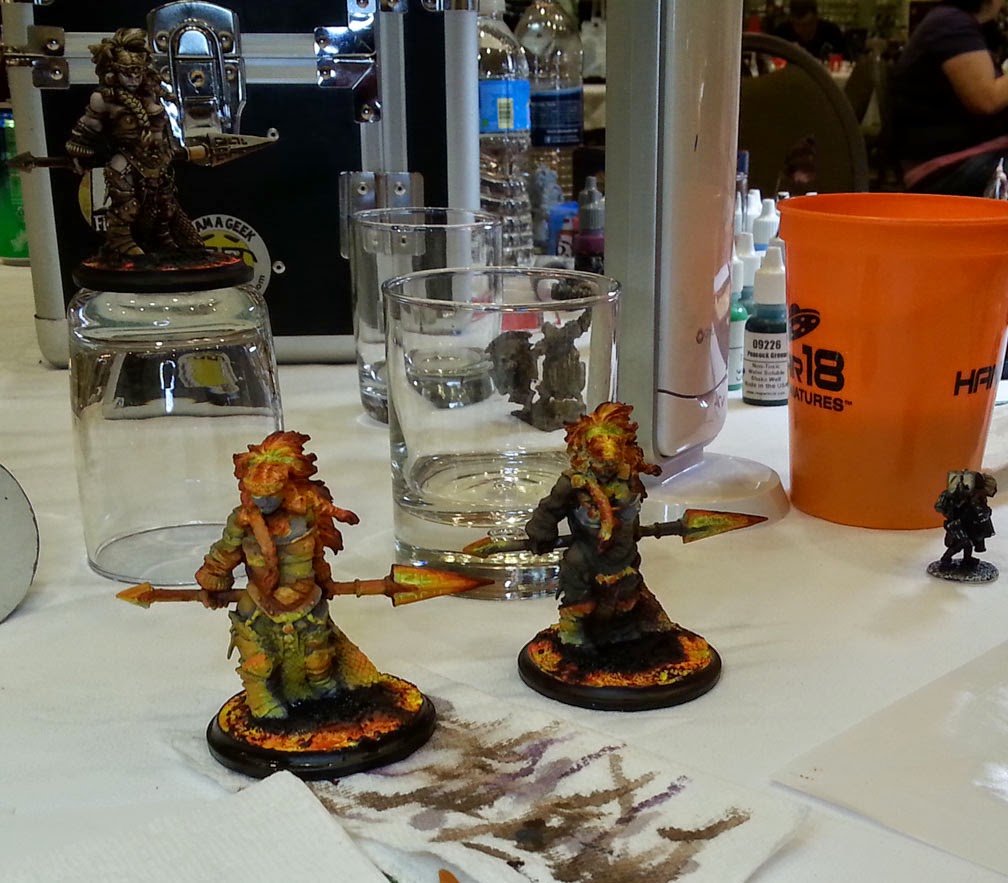 Mine, on the left, is going to get a number of glazes.  We felt that leaving the other giantess with its existing cooler colors on the armor on other areas would be a neat experiment. 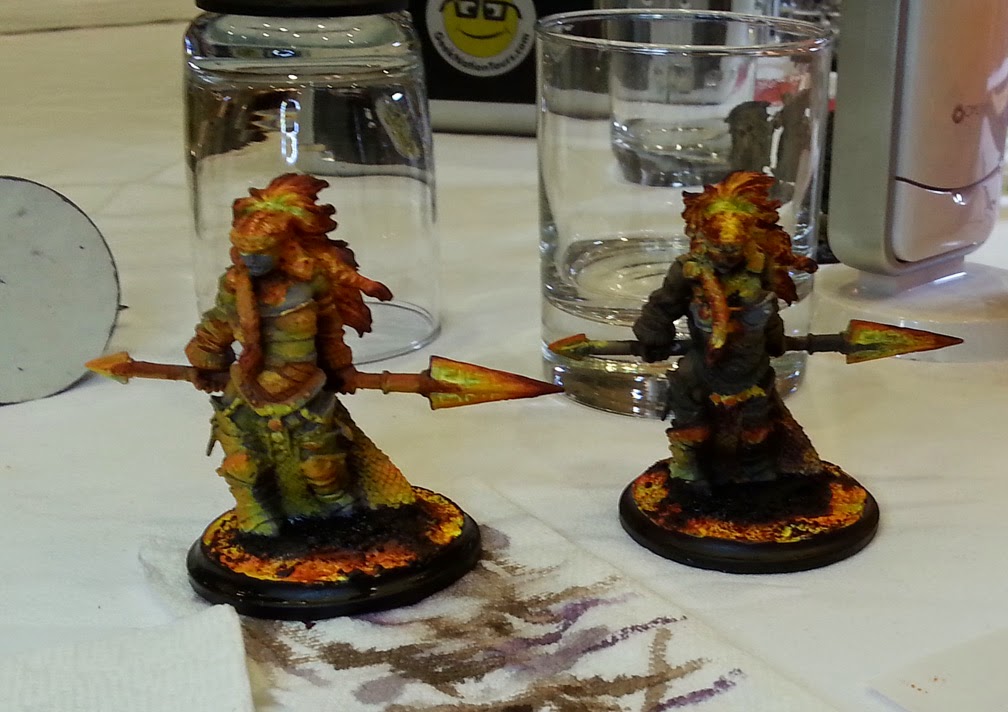 Check this out!  I was amazed to see the Giantess reappear the next day with this spectacular cracked lava skin tones!  Incredible idea.

Notice how the chunks of lava vary in size and intesity, and how they were made to look a bit like tribal tattoos.  That touch was simply pure genius!

This is why I tell every class that I learn as much from you, and why I love these post-class soirees!! 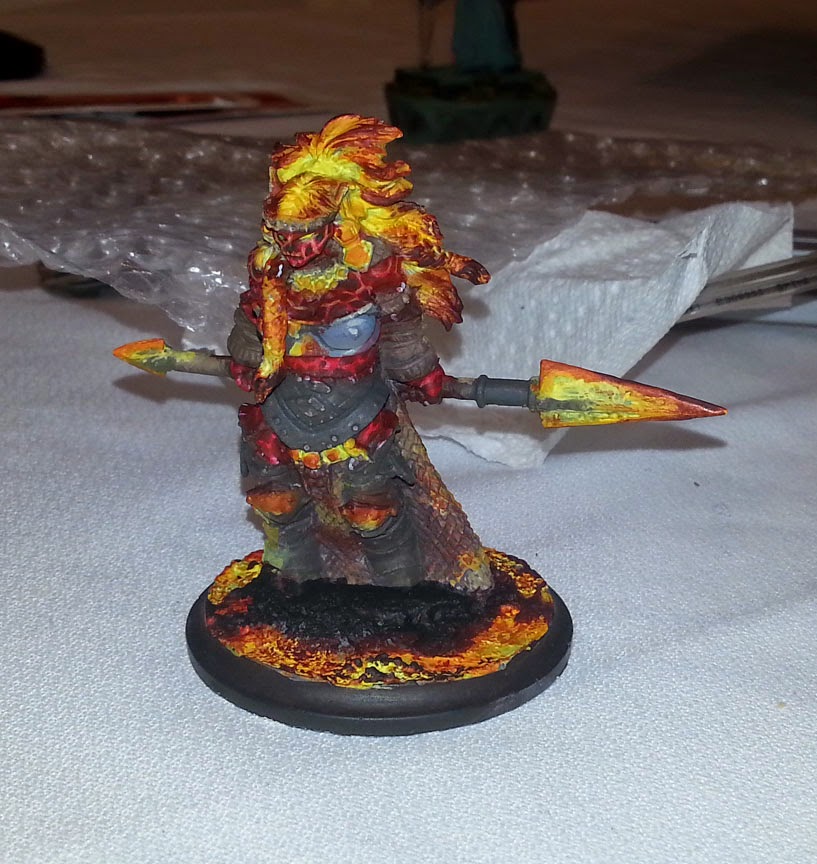 During the Glazing class, we experimented with a few of the Reaper clear colors.  I had only seen the Red clear, which I had used in blood effects.

Just a few moments of testing the clears made me think that much more exploration was required.  I asked the folks in the class if they would like to have a class based on these very interesting pigments.

The vote was unanimous, so I am hoping to put together some neat elements for a class in 2016!!

The class also joined me in my quest to have a new liner paint created.  We all made the sad puppy faces at Anne the paint alchemist, and she agreed to take a look.

It turned out to be a very fun challenge for her, and thus a new liner will be joining the other amazing pigments.  Yay!!! 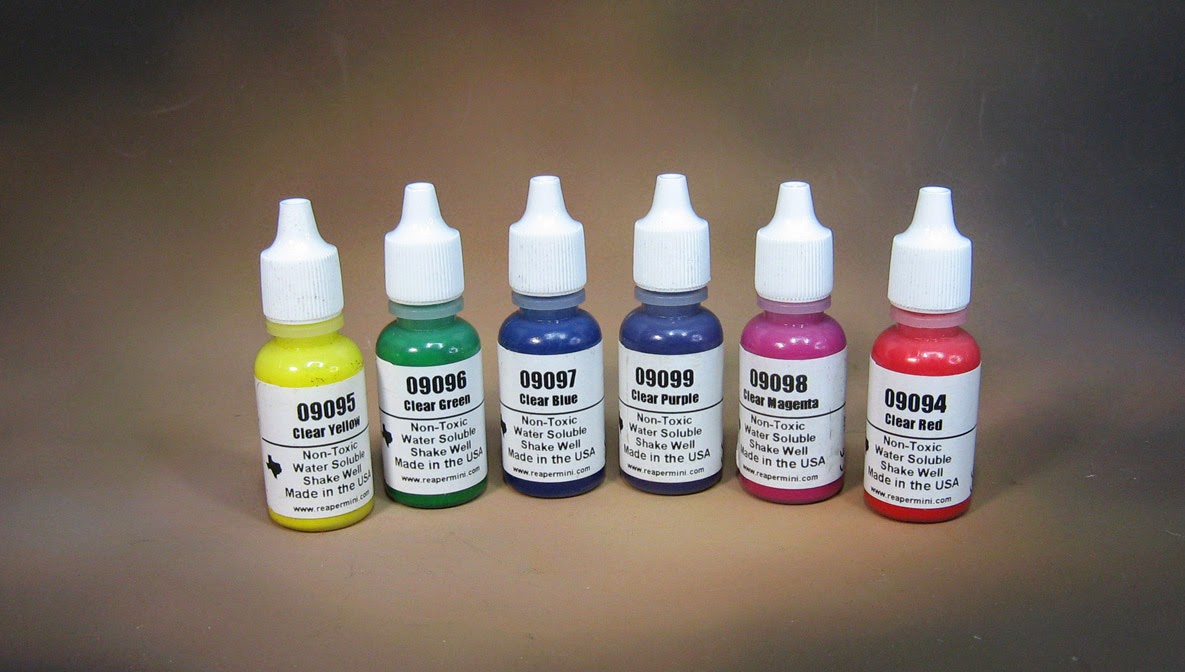