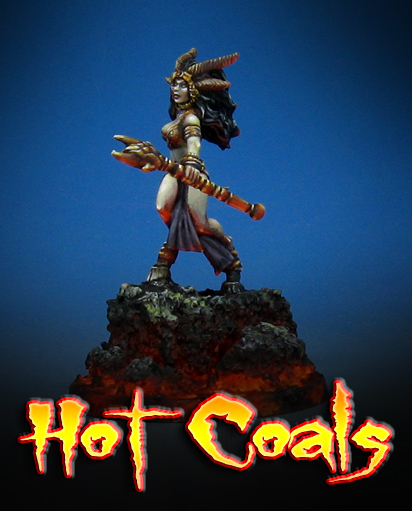 While there have been a few additions to the Bombshell Babes line since this lady was released, it's still a favorite!  I thought that putting some lava effects could take advantage of the drama of the pose.

Like all the Bombshell Babes, there is plenty of character, but there are enough blank canvas style spaces to allow the painter to do whatever effects or color scheme they want.  There are times where figures are so heavily weighed down by built in freehand designs, it can lock you into one theme.

Not so here, where I had plenty of areas to do freehand if I wanted, or do various markings on the skin.  Since I was going to have the dramatic lighting of the lava, I thought it best to keep things more simple on the figure itself.

This was also an exercise to illustrate that it is possible to reflect light on a surface that is also very light!  To make this work, shadow areas must be carefully placed to create the contrast needed to make a glowing effect.

Color temperature and saturation are other methods of establishing contrast.  That is, the lava colors are extremely pure and bright, and very warm.  The colors on the figure are more muted, and generally 'cooler'.

I enjoy painting lava effects so much, it just had to be part of the video series!  It's one of the 53 different subject matters I will have with me at Reapercon, so come and get 'em!!

Here's a link to one of several posts about the glowing effect videos.  This one shows the process of the "You Might Even Say it Glows" video, showing how to make glowing fire elementals, etc.: