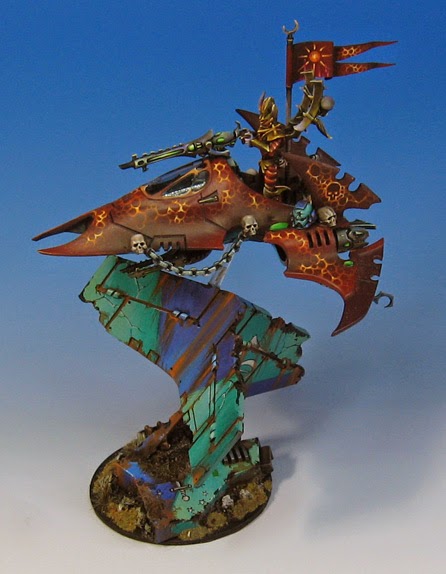 This was my favorite Venom, which belonged to the Archon and army general.  There were Incubus warriors inside.

Some of you might already know that the base was an homage to the "Crashed Plane Sculpture", as we call it, near Midway Airport.

It's an ugly twisted spire of metal, and it looks like the tail section of a recently crashed American Airlines plane.  I had a few tail sections of the nasty Storm Ravens around... so I could not resist!

It looks so different on this nice blue/white fade, as opposed to the sheet of white drawing paper with the smudges on it!

Because of the colors on the base, the Red backdrop works a little better than the previous Venom.  It looks like it about to arrive through the webway! 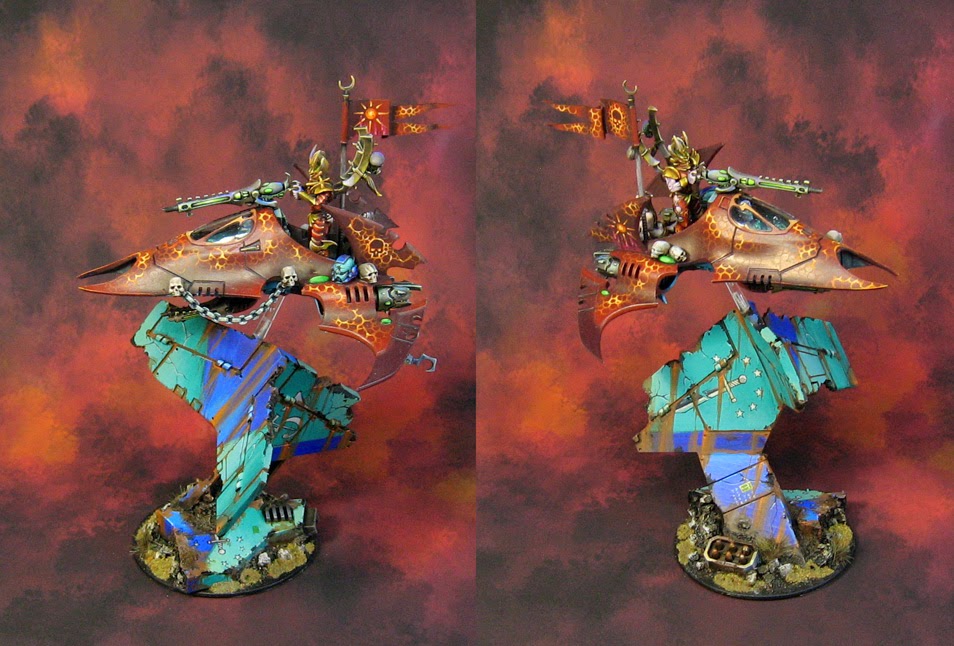 The green looks really atomic in this view!  So many contrasting colors. 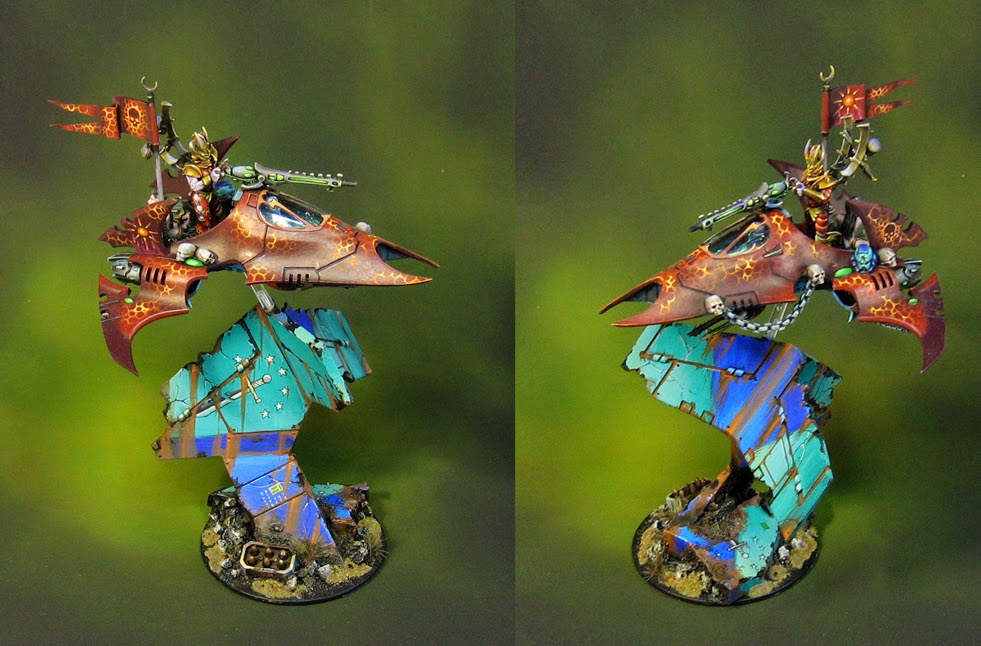 Now for the deep blue. 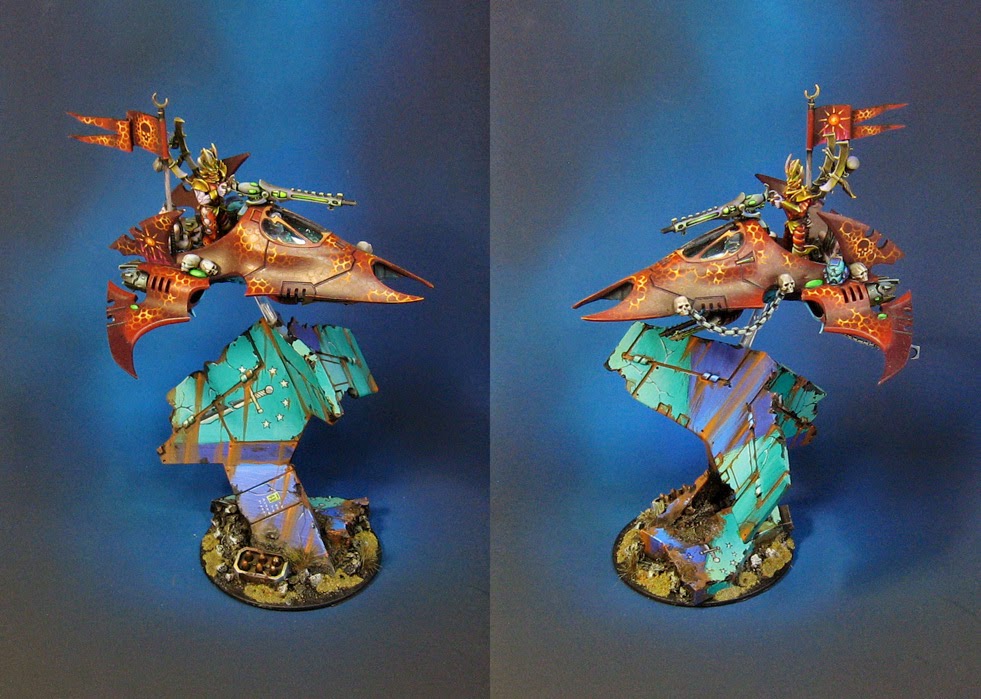 And to my favorite backdrop for these Dark Eldar vehicles. 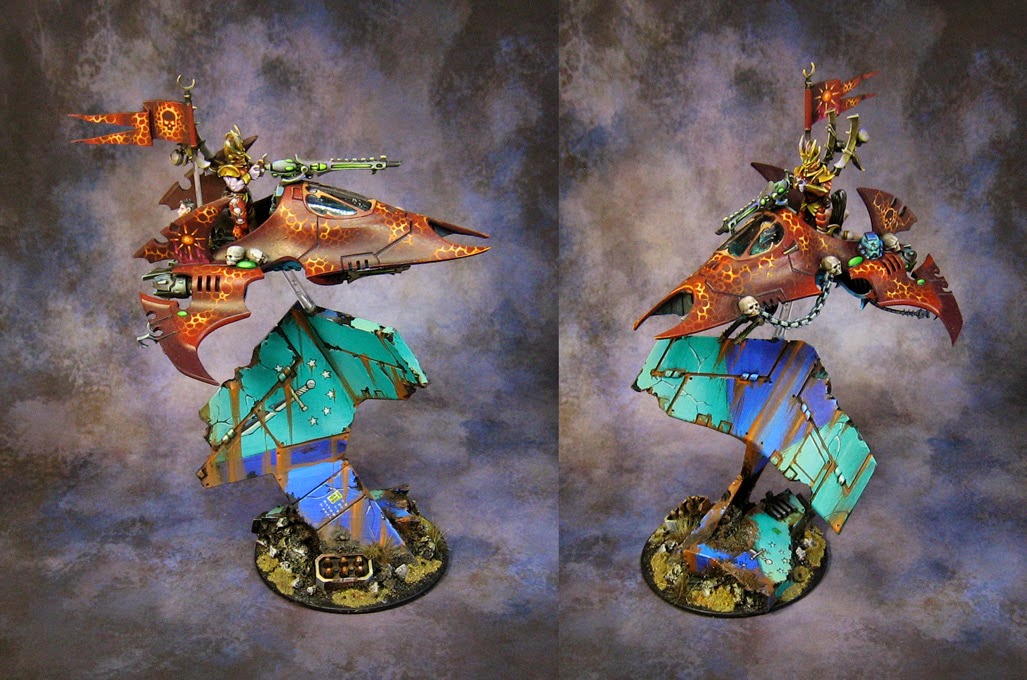 I really like how it is neutral to the vast majority of the surfaces.  No color is drowned out, nor is any color too bright.  About as close to neutrality as the blue white fade, but a wee bit more interest.  Thanks again to Hangar 18!! 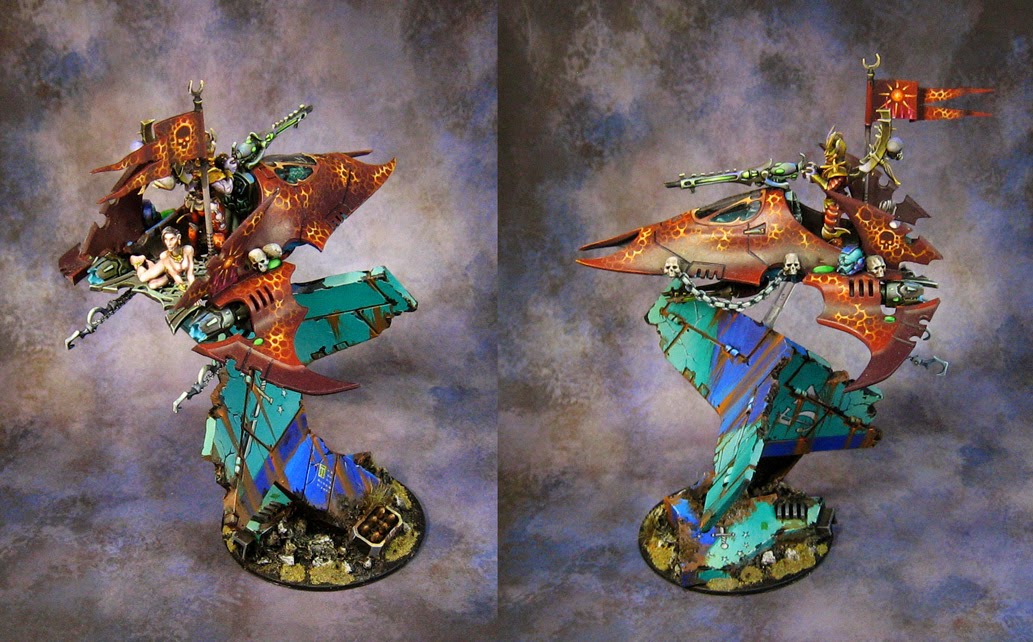 Posted by wappellious at 5:19 PM 4 comments: 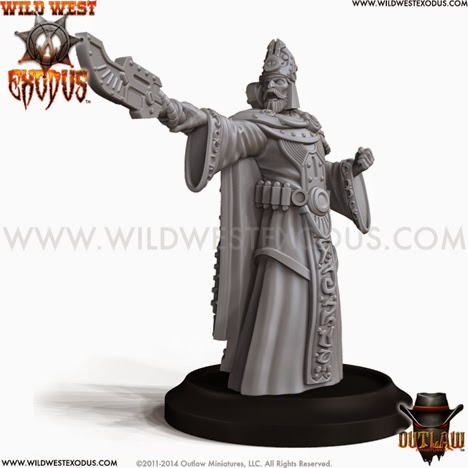 As many of you already know, the game that has captured my fancy since Adepticon is Wild West Exodus.  You have seen the process of the painting of the Siege Train, which has been a blast!

By the way, that train is headed to GenCon, so you can see it in person, in all its massive glory, at the Wild West booth!

That is where I will be learning the game, and also painting some Wild West miniatures!  Double the fun, and I am really looking forward to that.  I have been gathering references for terrain, which is something you will see a lot this winter.

This is to be the next large vehicle I will be painting.  It is the Pillar of Light heavy support.  It will be very fun, and it has also made me choose the Holy Orders as the faction I would like to start playing. 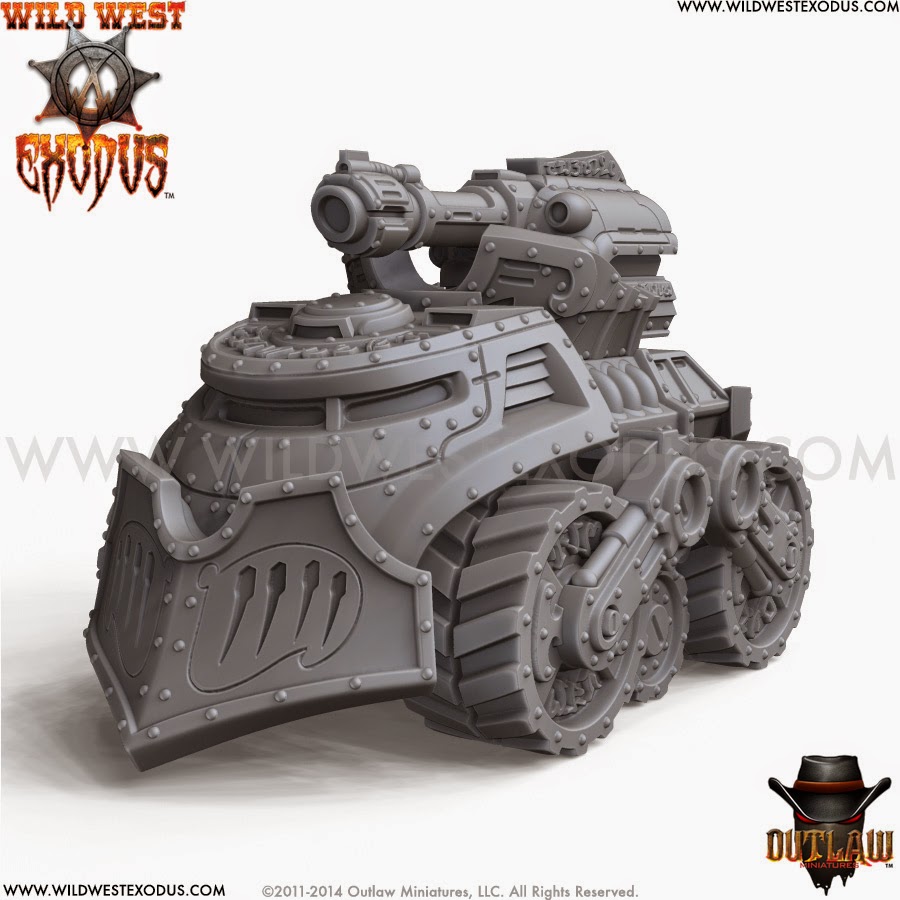 Here are some more images.  And here is a link to the Wild West page for you: 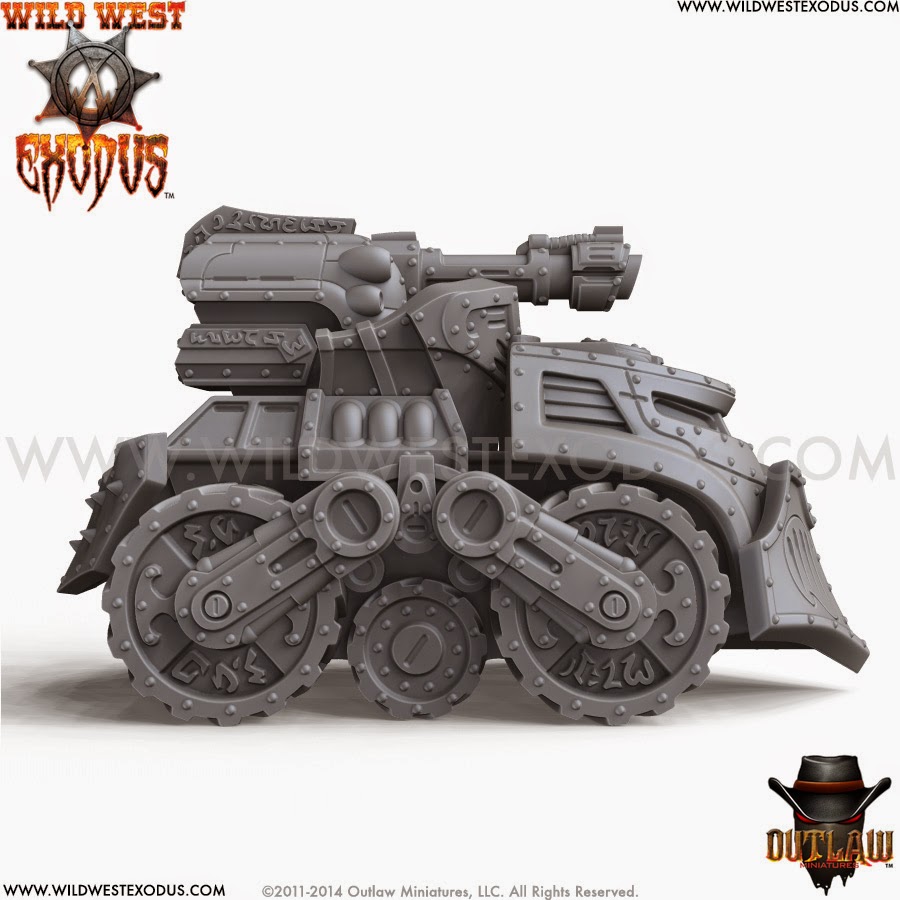 It reminds me so much of the Beloved Inquisition armies I used to play back in the day, so too hard to resist.  The terrain possibilities will be incredible, so definitely something I want to try. 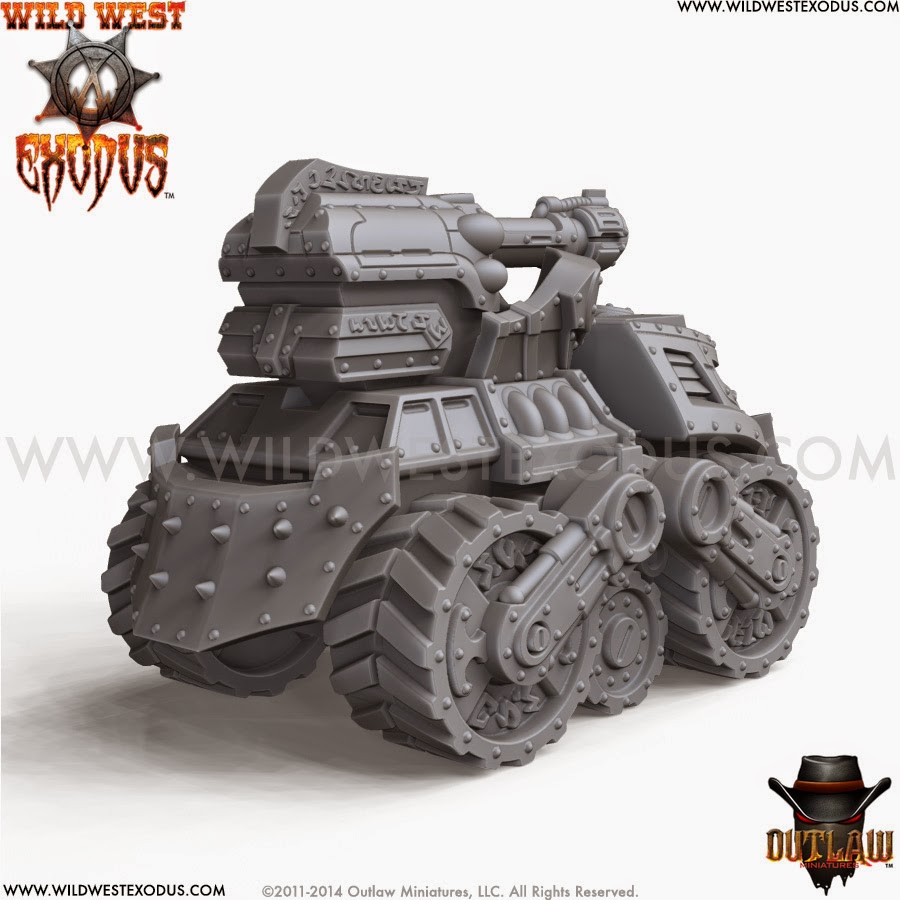 I have been impressed at the individuality of each faction.  They look very distinct, and they have their own stories.  I liked the back story for this faction.
They are a mix of all the major old world orders. Romans, Greeks, and just about any major group from ancient times. The army as a whole has been around for thousands of years in the shadows watching over mankind. They have helped build cultures and have watched man blow it all up.

I have been reading some of them to get a feel for the WWX universe.  Here's an example:
http://www.wildwestexodus.com/honor-among-outlaws-the-jesse-james-archives/ 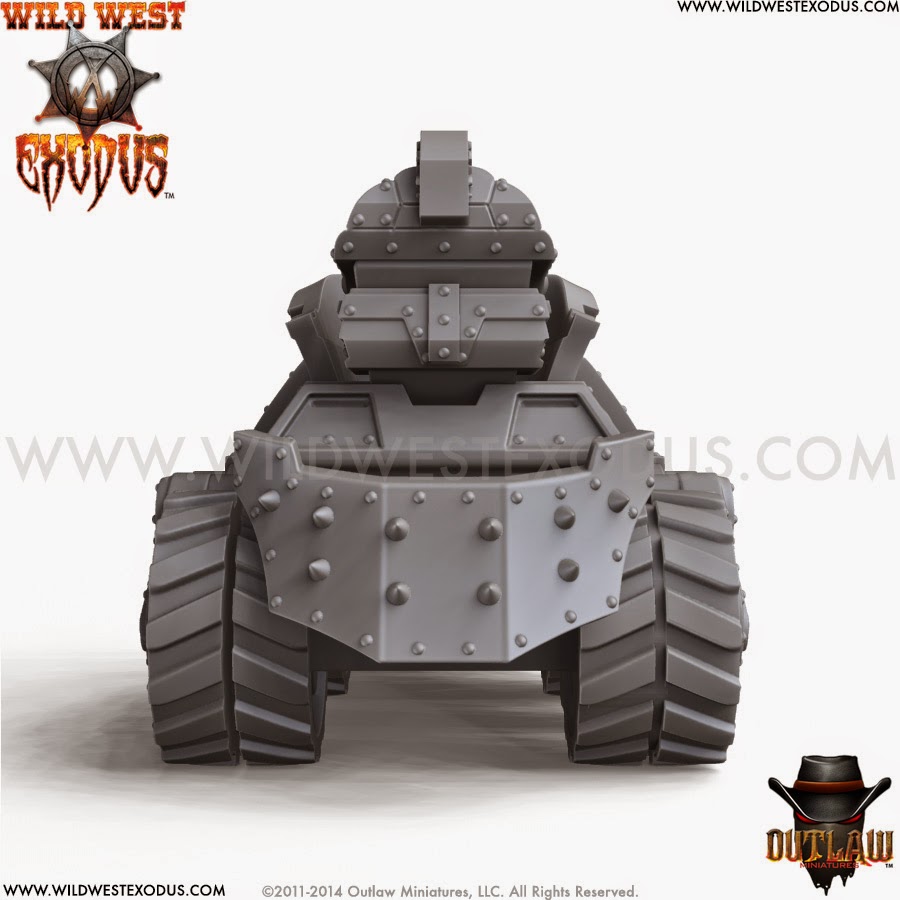 And now for the regular guys.  Among other WWX miniatures, the plan is to be painting some of these.  I will be making some bases for them in advance.  Also, I will be working the Paint and Take area, focusing on basing.

You can stop by an hang out with me there as well! 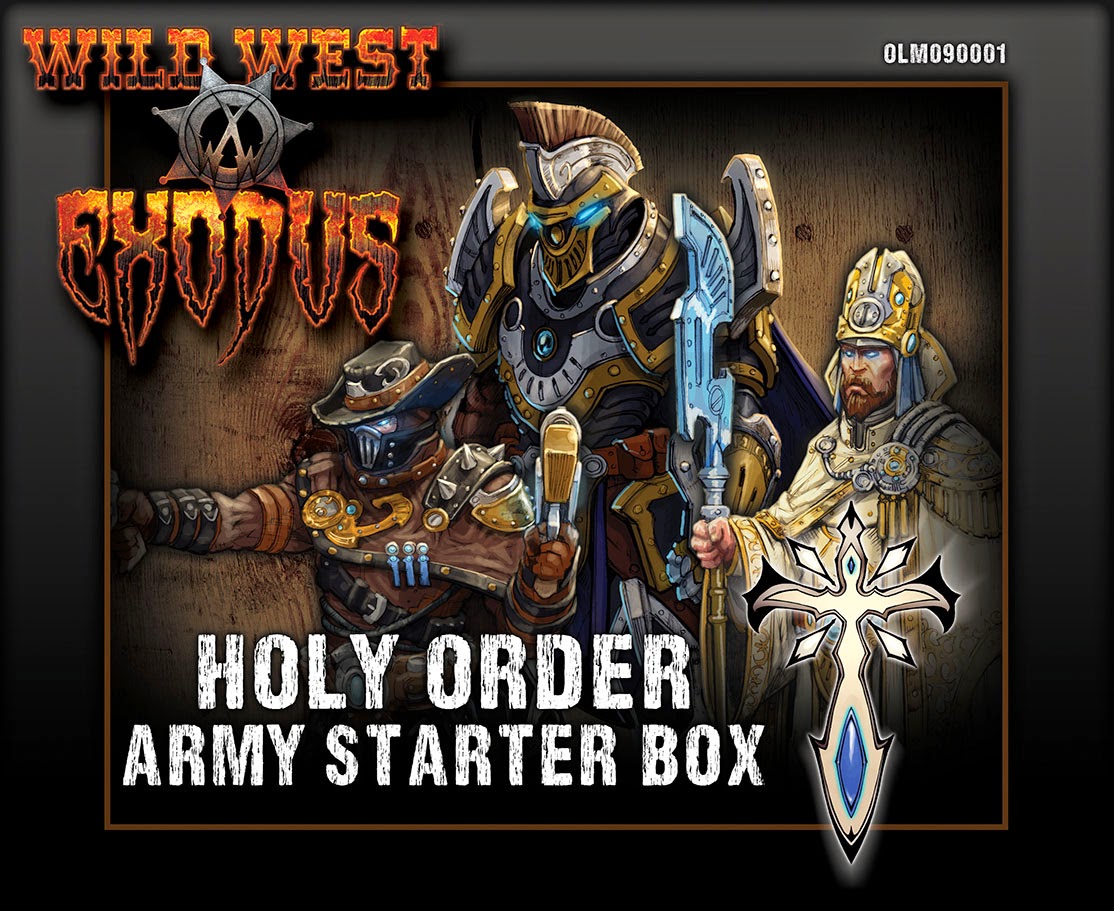 Next we have some images of special characters and troops... or Hired Hands.

I saw this, and said this has to be the faction for me! 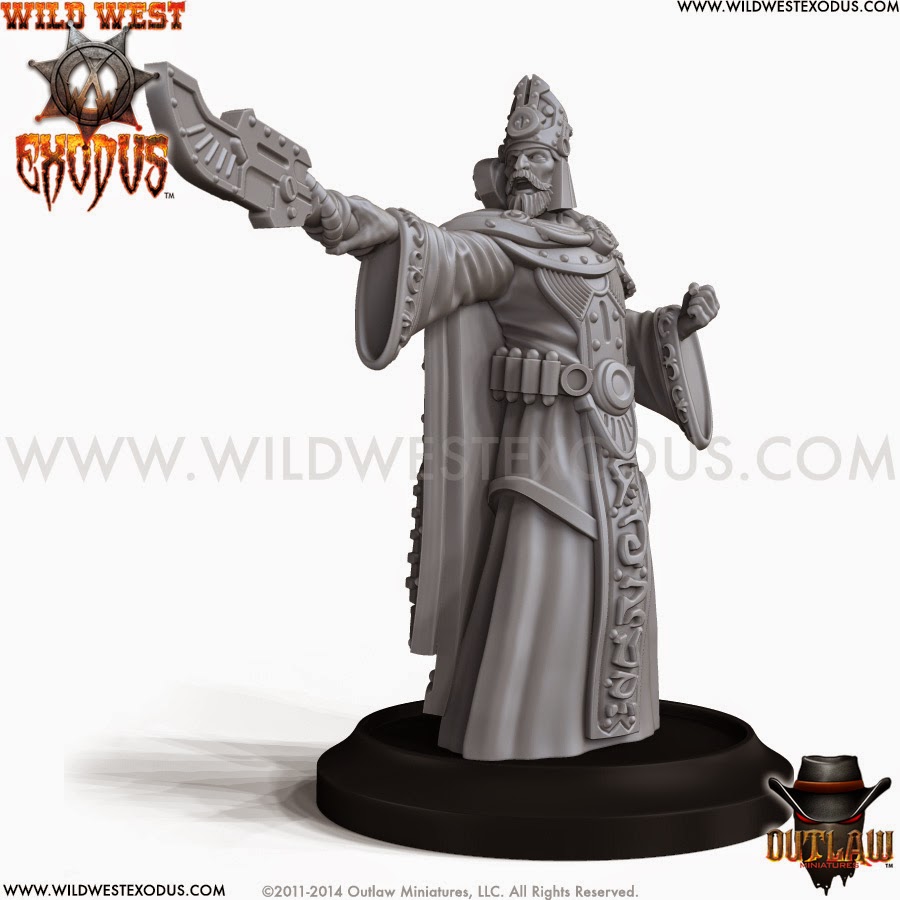 These are a plastic kit.  I have assembled the starter set factions, as well as the Outlaw gang that reminds us all of a favorite sci-fi show!  They are highly detailed, and go together very nicely.

Strong as well, with not lots of spindly parts for breaking. 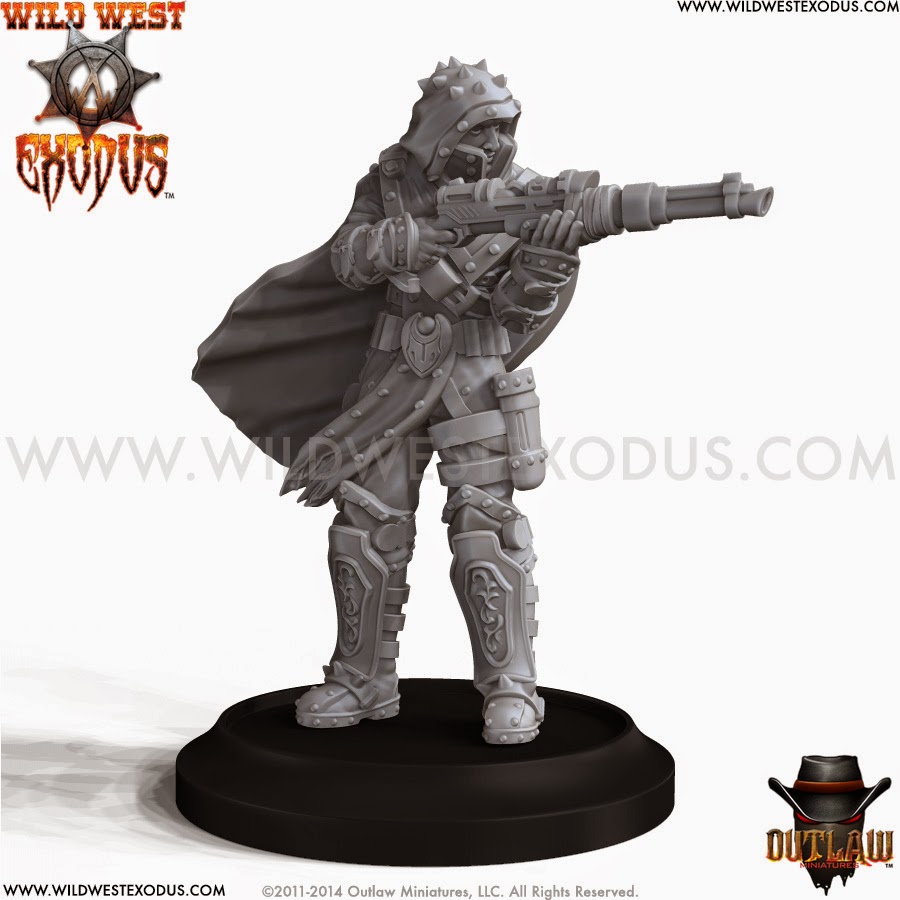 As with all Hired Hand boxes, there are ten unique figures inside. 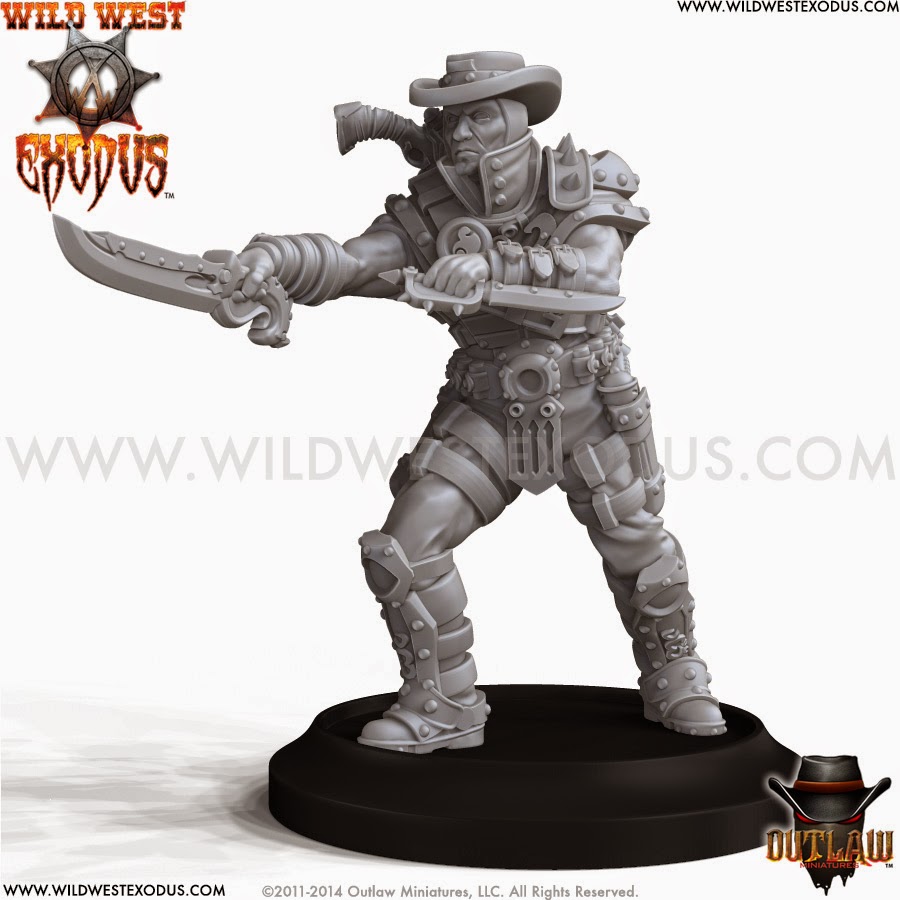 I really enjoyed this pose. 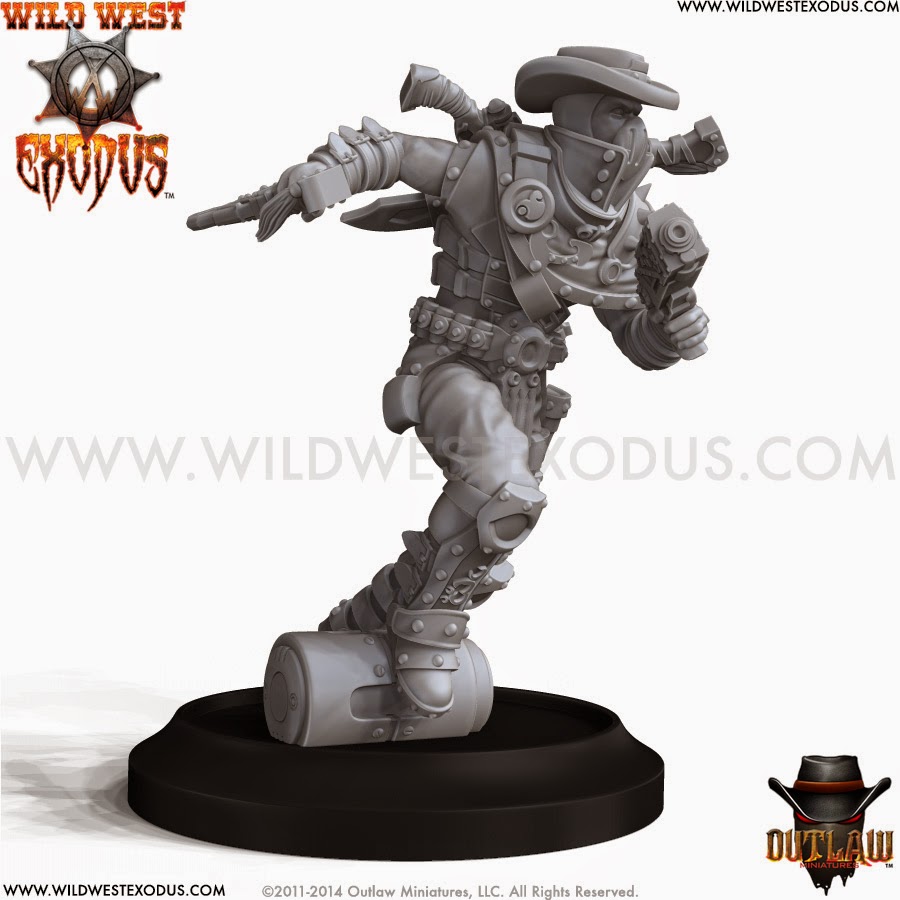 And especially liked this one! 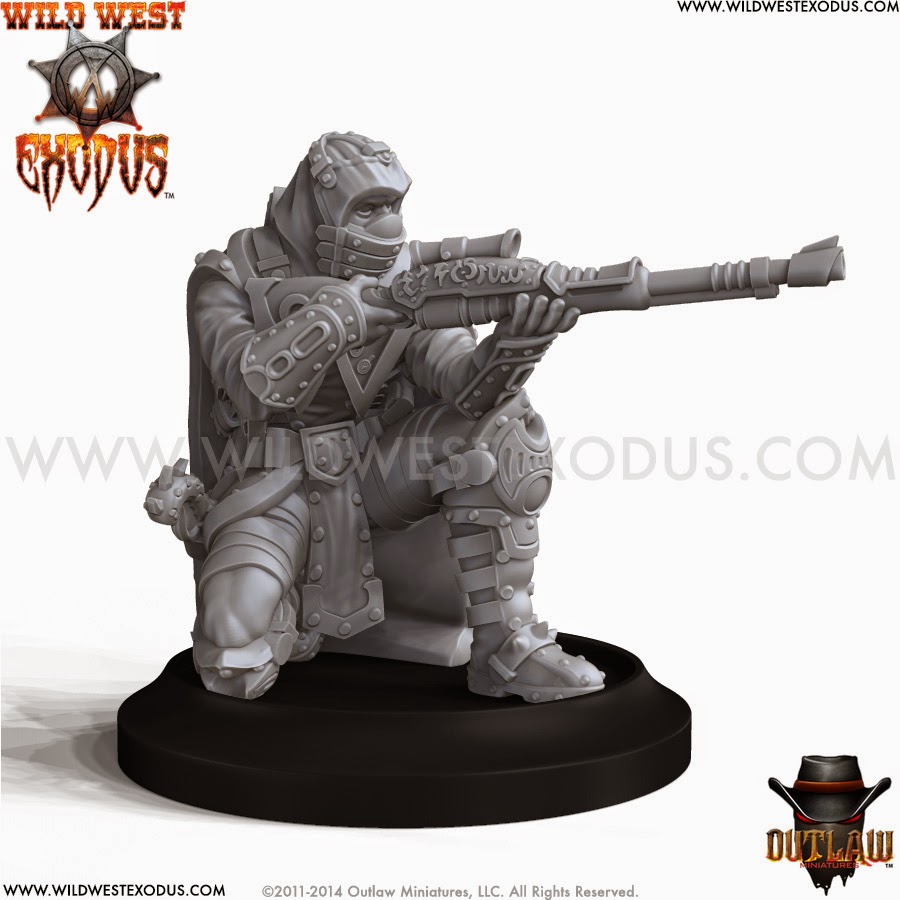 And the set.
Armed with the knowledge of how to play the game, I am hoping that over the fall and winter, I can get some factions painted up, terrain made, and have the battle reports flowing!

You've seen it with LOTR, with Memoir.  Heading to the weird west next! 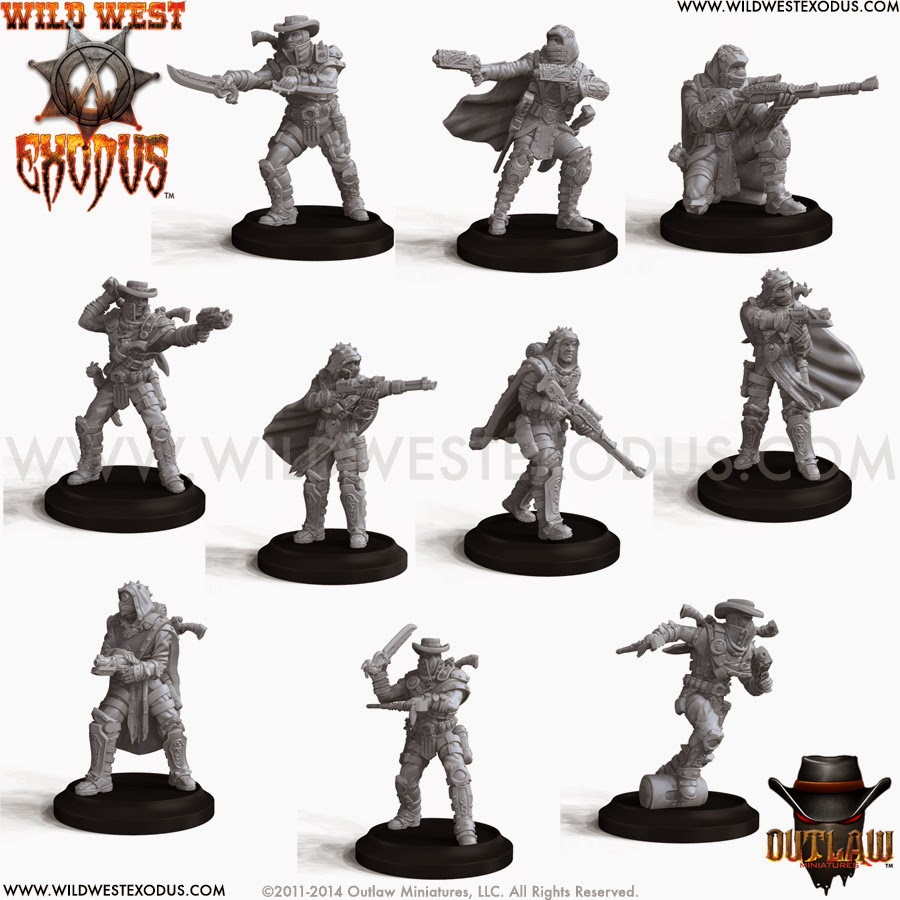 Deadlands was my favorite RPG, so I am gonna love this :-) 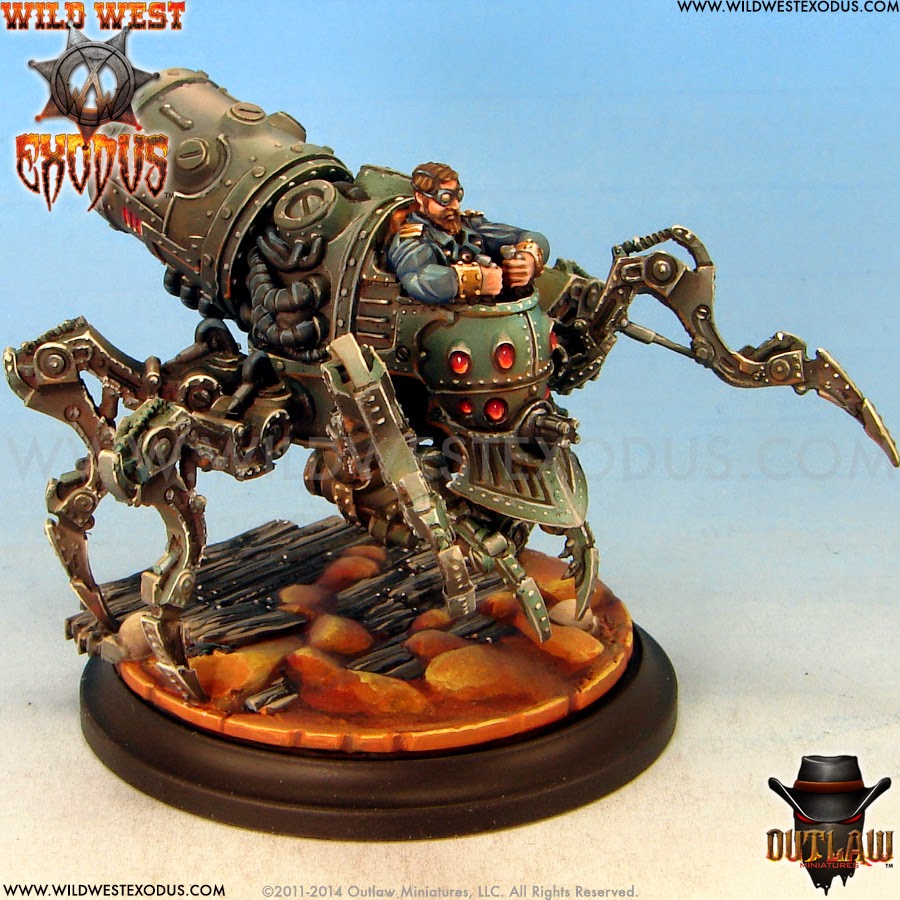 Posted by wappellious at 5:08 AM 2 comments: