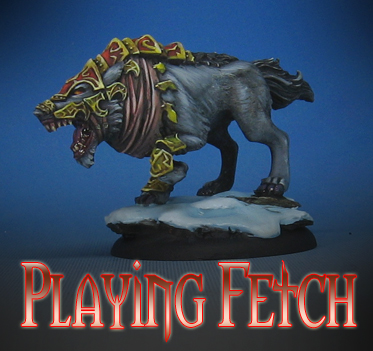 It has been a while since the Circle Oboros doggies made an appearance, but here is another one that is part of the massive winter force.  That is comprised of several different companies, including Tharn and Oboros figures.

This one had to match all the others that had come before, which means that I rely even more strongly on the Shaded Basecoat and Glazing techniques.  It is so much easier to match a figure when you don't remember what you used in the past, or that is not even available any more.

Just as I stressed in the classes at Reapercon, the idea is to not only simplify your color palette, but to paint as many other figures at the same time which use those colors.  As I was working on this figure, I had at least a dozen other completely unrelated figures on the table.

Sometimes all you are painting is one small element of each figure, or only a certain amount of that batch.  It is funny how much I realize that figures end up using so many similar tones.

This particular color scheme presents an interesting contrast, with some warm, bright colors right next to cooler and very muted tones.

Posted by wappellious at 10:25 AM No comments: