The Dust has Risen! 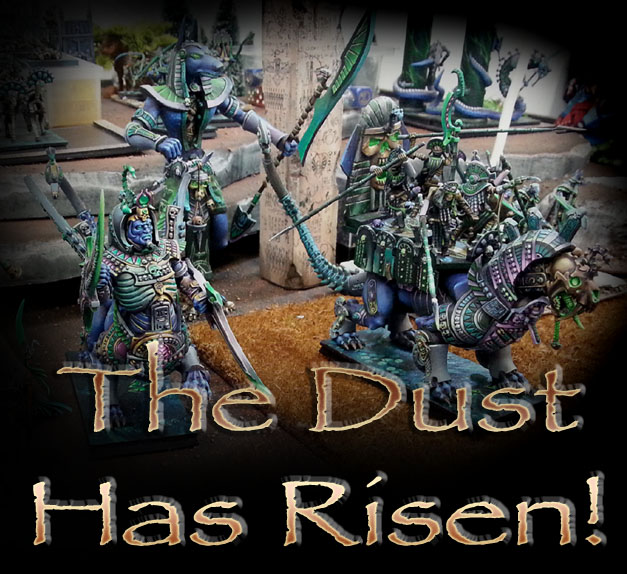 In an effort to revive the old Tomb Kings army (which has not been out of the storage boxes in over 2 years), I thought I would give them a try in Kings of War as Empire of Dust.

I had no idea what to expect, since I had not even seen the game being played.  Going into it blind is a bit of an understatement.  Fortunately, any list building was very restricted to whatever I could translate from my 2250 Adepticon tournament list from years ago!

Right off the bat, my life was made easier by the free army building software, which can be printed and saved as a PDF, etc.  It was extremely helpful that all the special rules, magic items and so on were explained in nice big type so that I could go back and recheck them a million times during the game.

I had a vague idea of how some of the items might interact with units, and what kind of synergy might be established.  Before I played the Tomb Kings, I was looking forward to playing such an army.  The disappointment was extreme when I learned that was never meant to be. 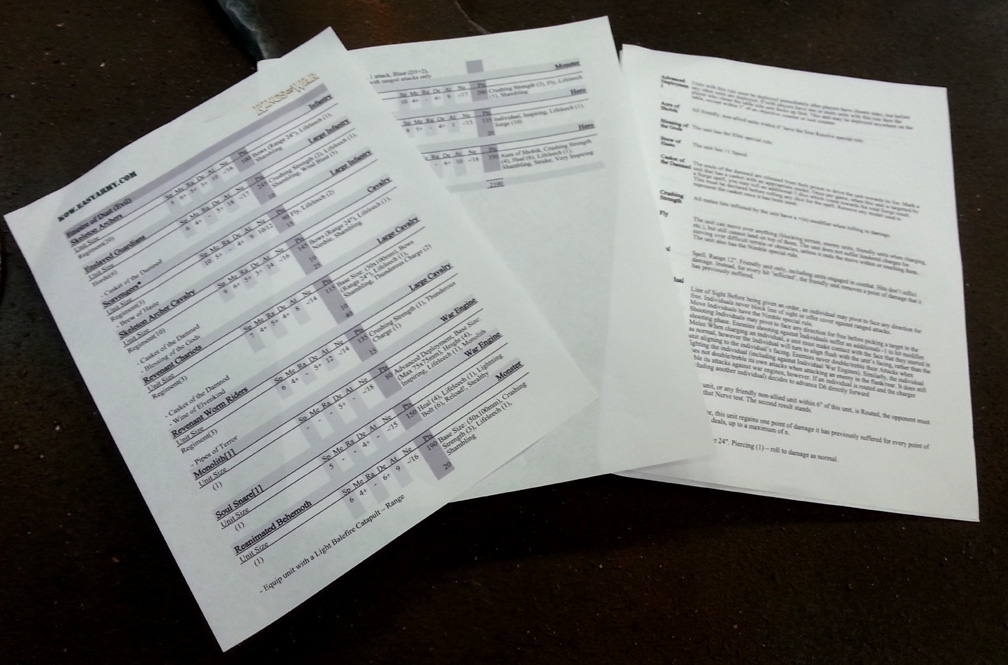 I had a few hopes for Kings of War.  First, I was hoping not to experience one turn massacres due to unreal firepower from the opponent, or catastrophic pre-game scenario results (such as having my entire army squished into a 12 x 18 square!).  Also lookin' at you, Watchtower.

From what I had heard, units were not quite as devastating, or easy to kill in this game, particularly from shooting.  In addition, a supercomputer was not needed to calculate static combat rez, nor did you need protractors and decks of magic cards.

The fact that magic had some built in limitations here was very appealing, among other things! 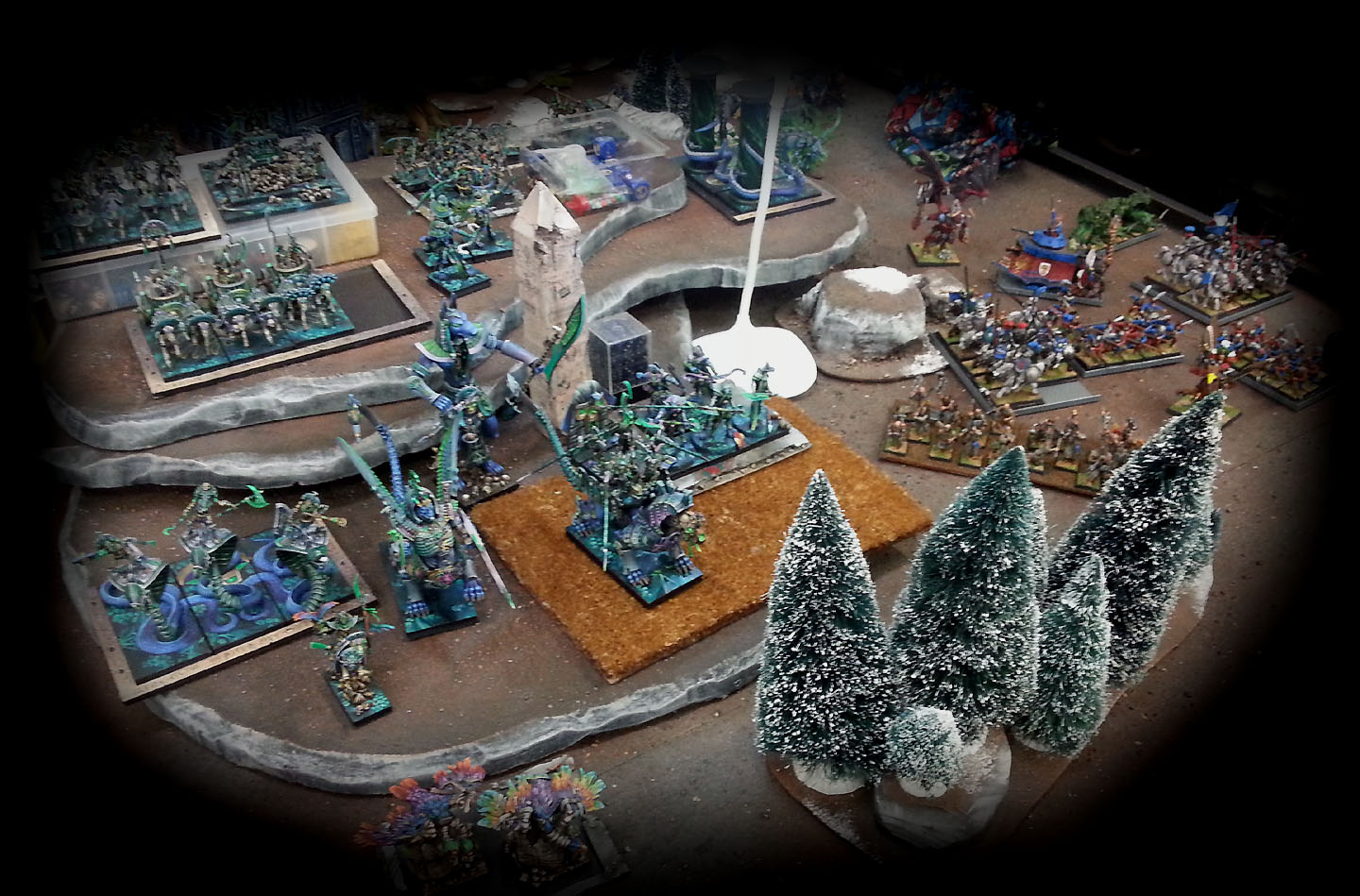 It was with great anticipation that we arrived at Draxtar for the revival of the Legions of Pseusennes!!!  Heck, it was wonderful just to see them on a table again.  This feeling would magnify as the game played out. 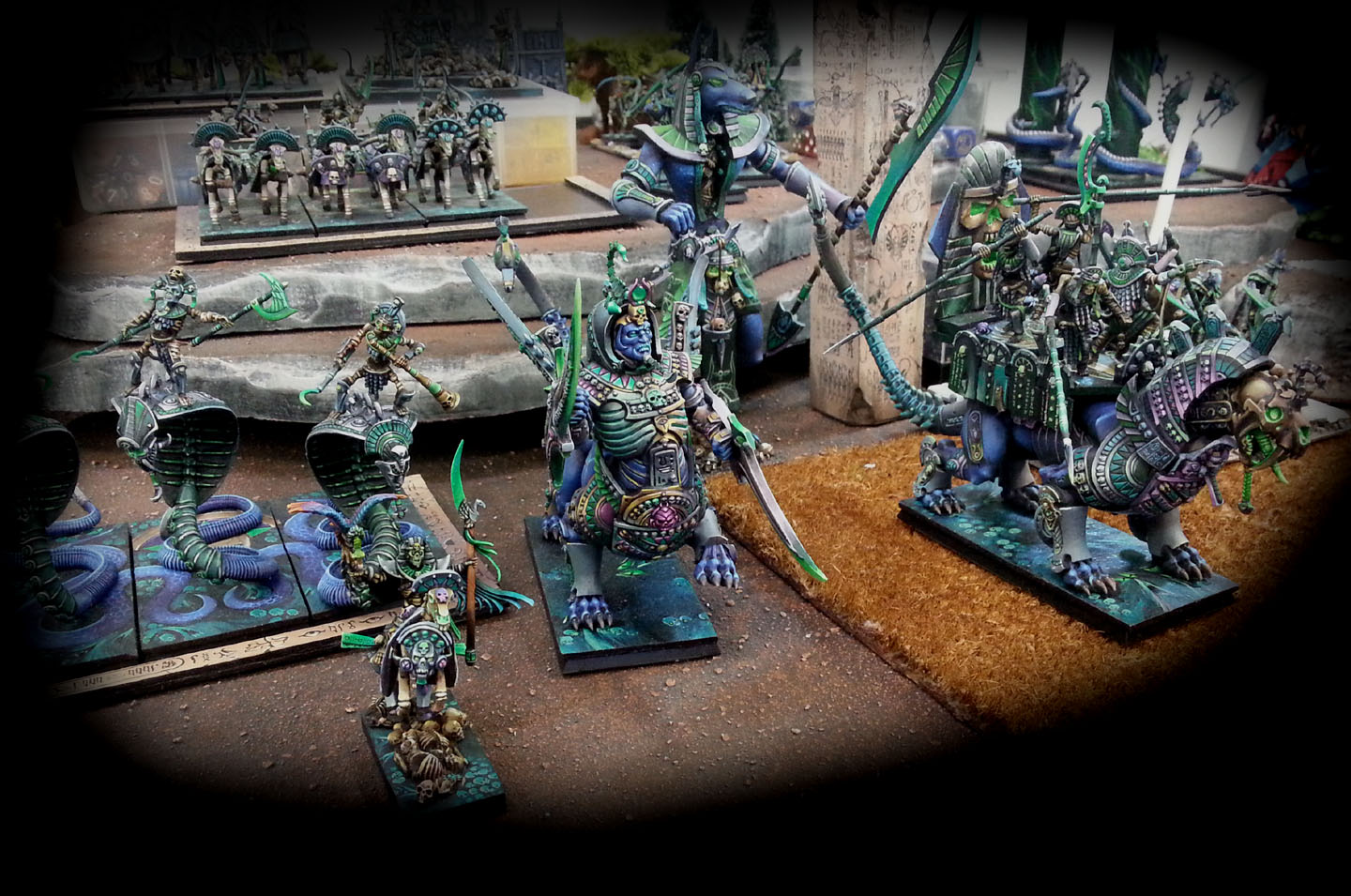 This was not an ideal force per se, as I had very few cheap units.  Fortunately, the designers did not inflict every unit with shambling, and made the monsters tougher to kill (no goblin archers taking down a Necrosphinx in one turn!)  Yay!

There were other subtle solutions to the shambling issue... such as Casket of the Dammed, and extra movement on a few others.  Individual magic items could also be applied here and there if I was really worried about that. 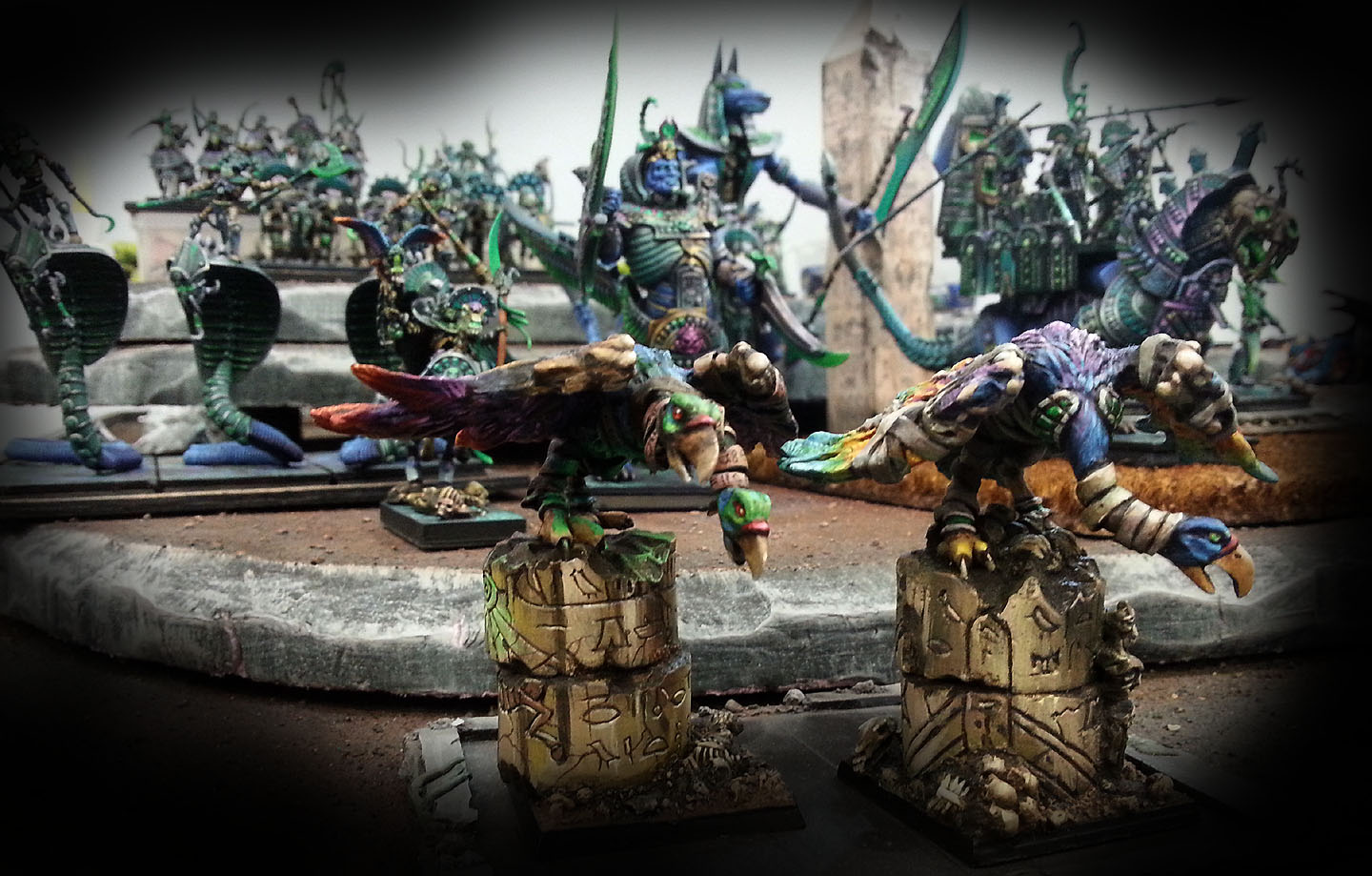 Rich was kind enough to bring along his old Empire army, with a few allies as well! 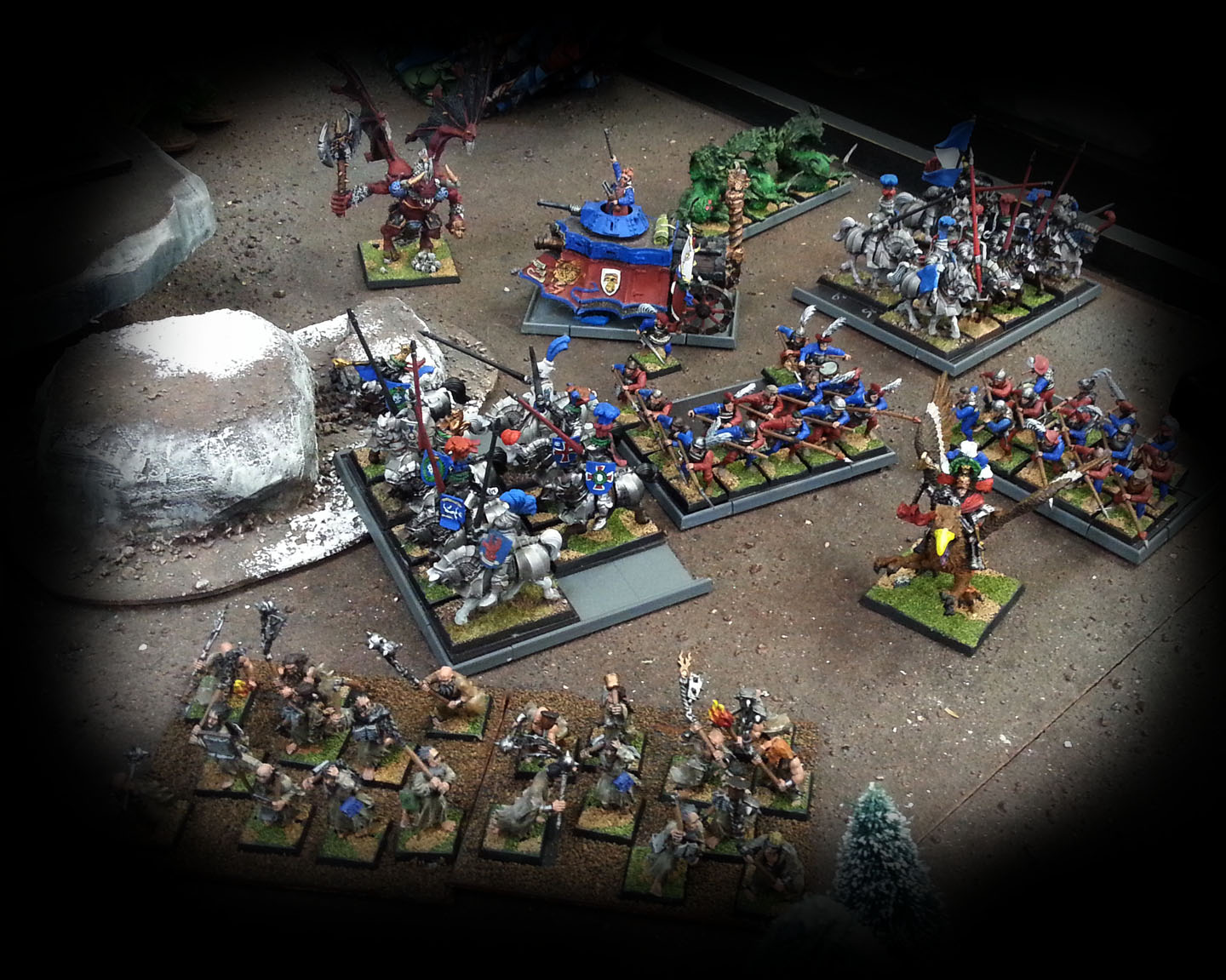 The scenario was very vanilla in this case, since I had very little idea of what was going on.  I had to deploy the Monolith before the regular deployment.

Something told me that all the action was going to be in the center of the table, so I put it there hoping for a few things.  First, another height 4 LOS blocker, and a boost to the various magics that would probably be used in this area.

I didn't know how helpful it would eventually be with the inspiring factor. 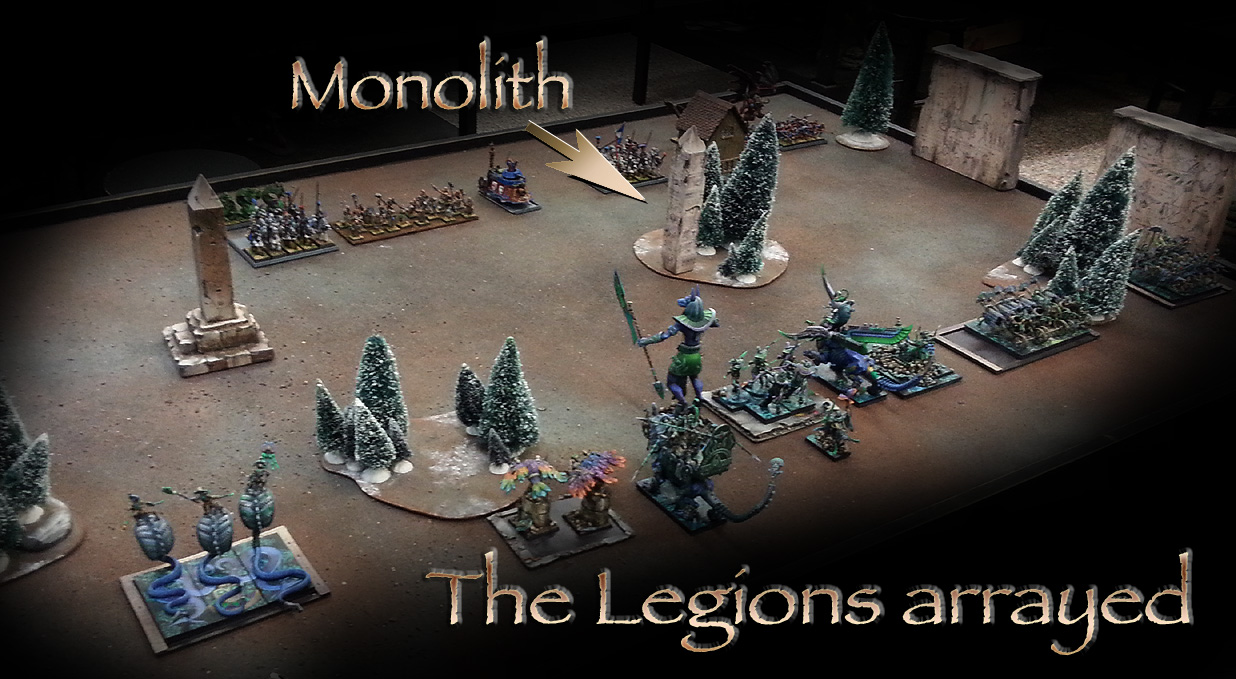 This was a familiar opponent in some ways.  Units of heavy knights, spearmen, Flagellants, and even the allied beasts.

I knew that I was massively outnumbered by raw bodies, but I hoped to be able to combine magic, a few key shooting units, hard hitting monsters, and some juicy sacrifices as well to take down enough units to even the playing field.

I ceded my right flank to the big stuff that the Men had opposite them.  I would shoot at the advancing spearmen as much as possible until they were either on top of me, or they were destroyed by an unfortunate fortitude roll. 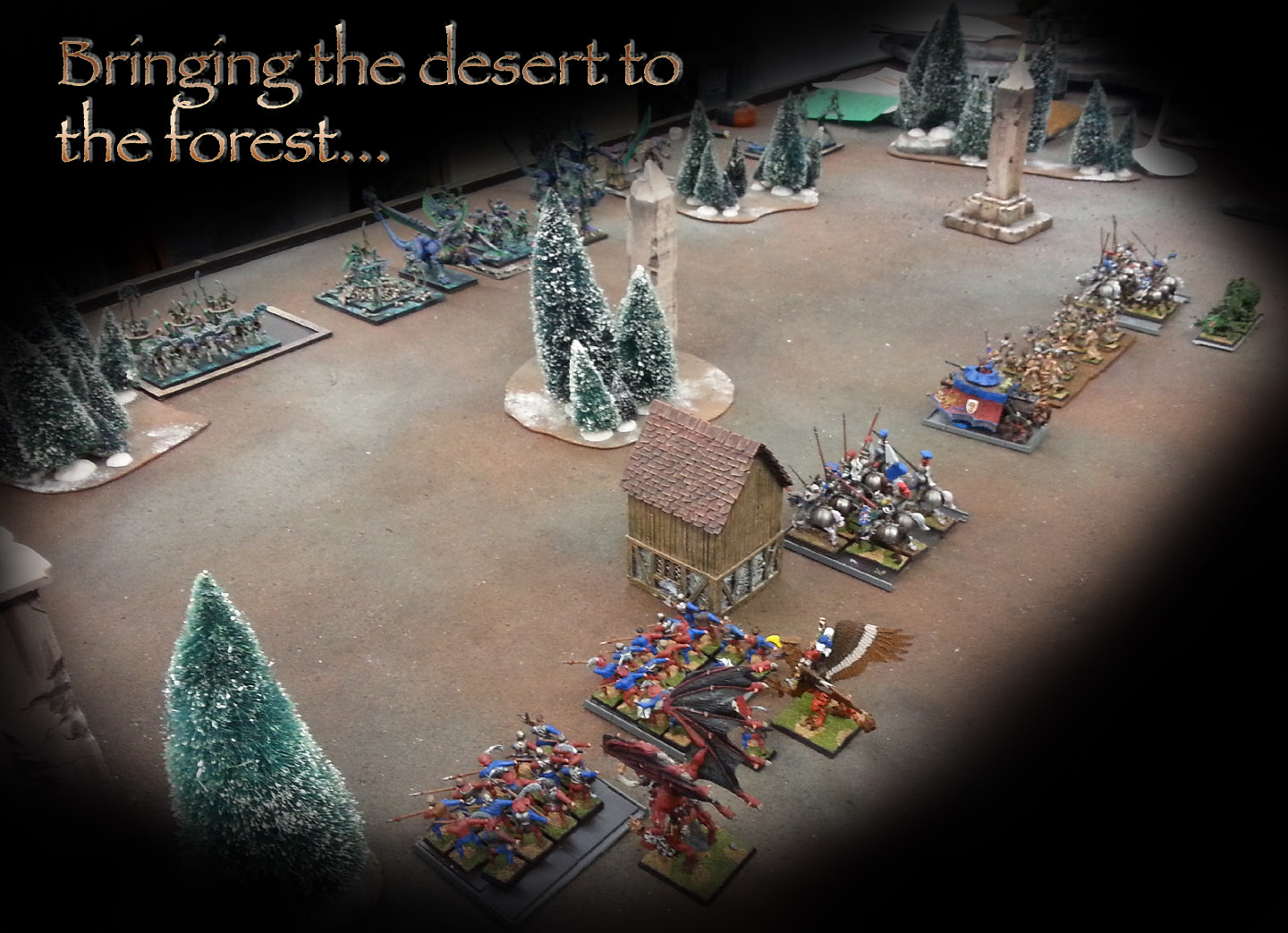 The Men advanced forward in a virtual straight line.  I tried to create a staggered line in response, which would hopefully create a few traps.  While I knew that you could not "roll up" units with victorious advances after a close combat round (like WFB), I had no idea how those post charge/melee moves worked until they happened. 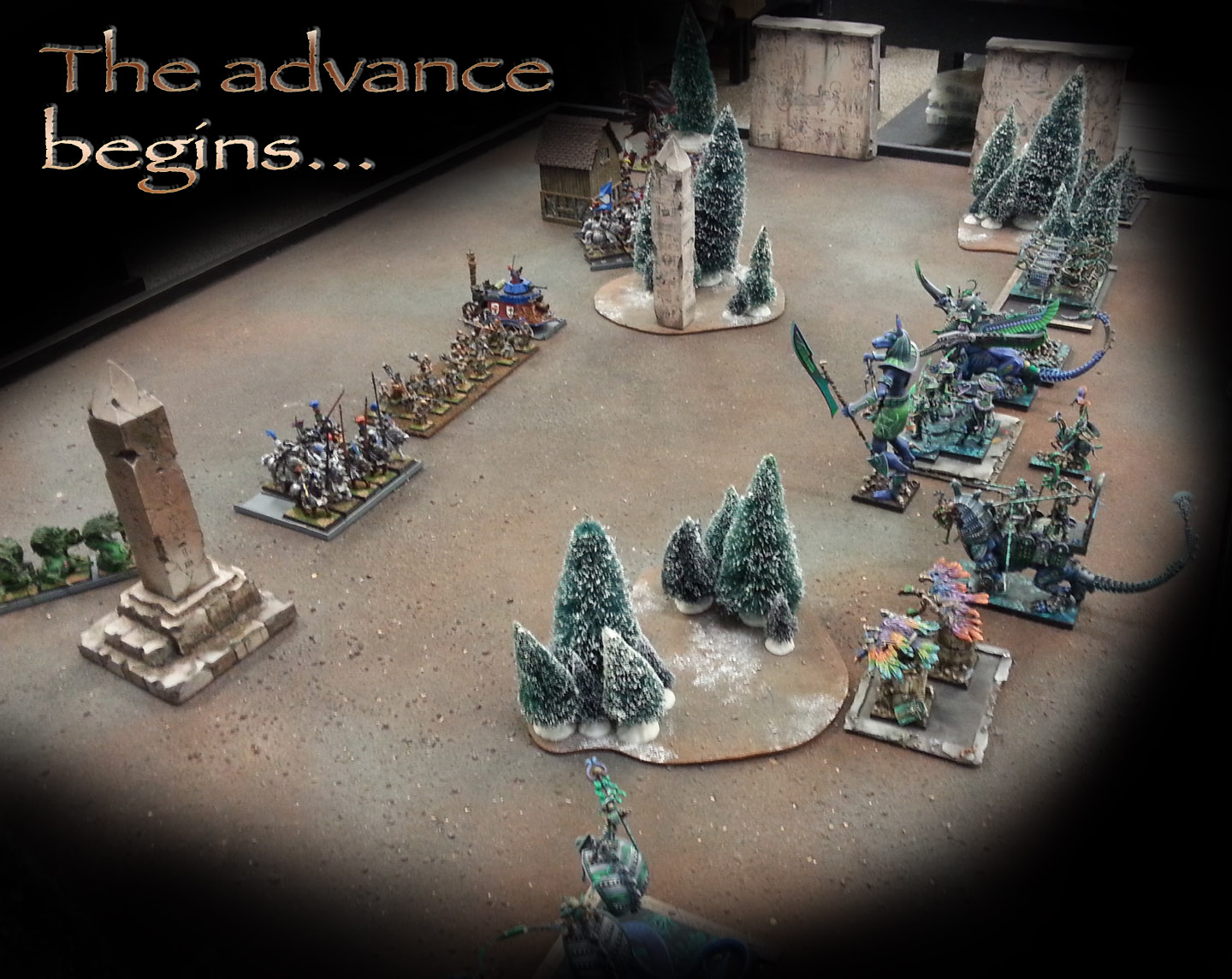 Here we go!  Setting the main trap.  The Enslaved Guardians seemed to be an appropriate high priced target.  I would find out one way or another how tough or weak units would be quite soon!

I attempted to use their Wind Blast spell before they were ultimately charged, but I was one success short of keeping the Steamtank/beast from charging the doomed Guardians!  Shobik was not pleased. 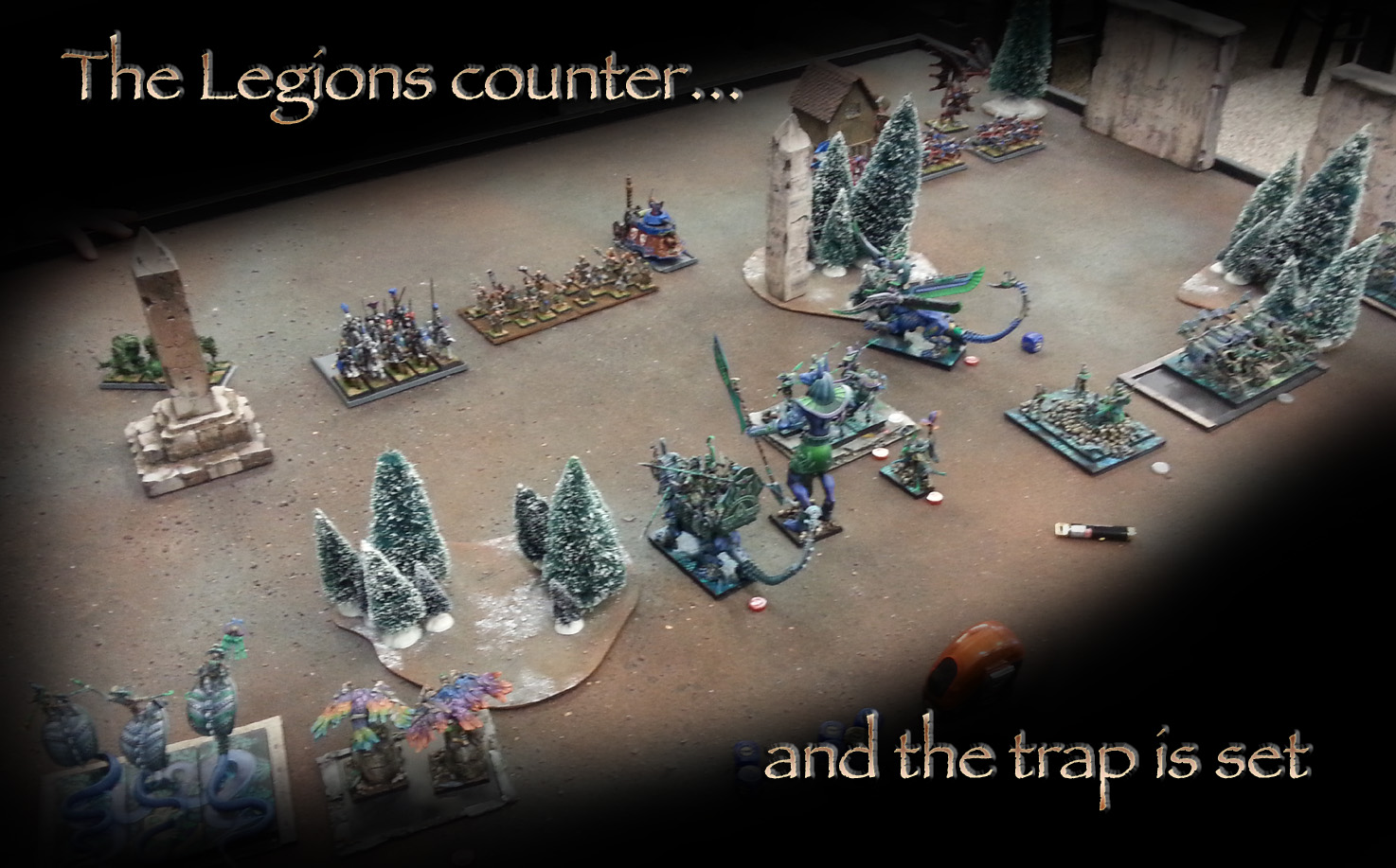 As I hoped, the Knights were headstrong and flew into the waiting sacrifice.  In all likelihood, their impetus alone would have been enough to destroy the Guardians.  The Tank was able to add it's fearsome strength as well. 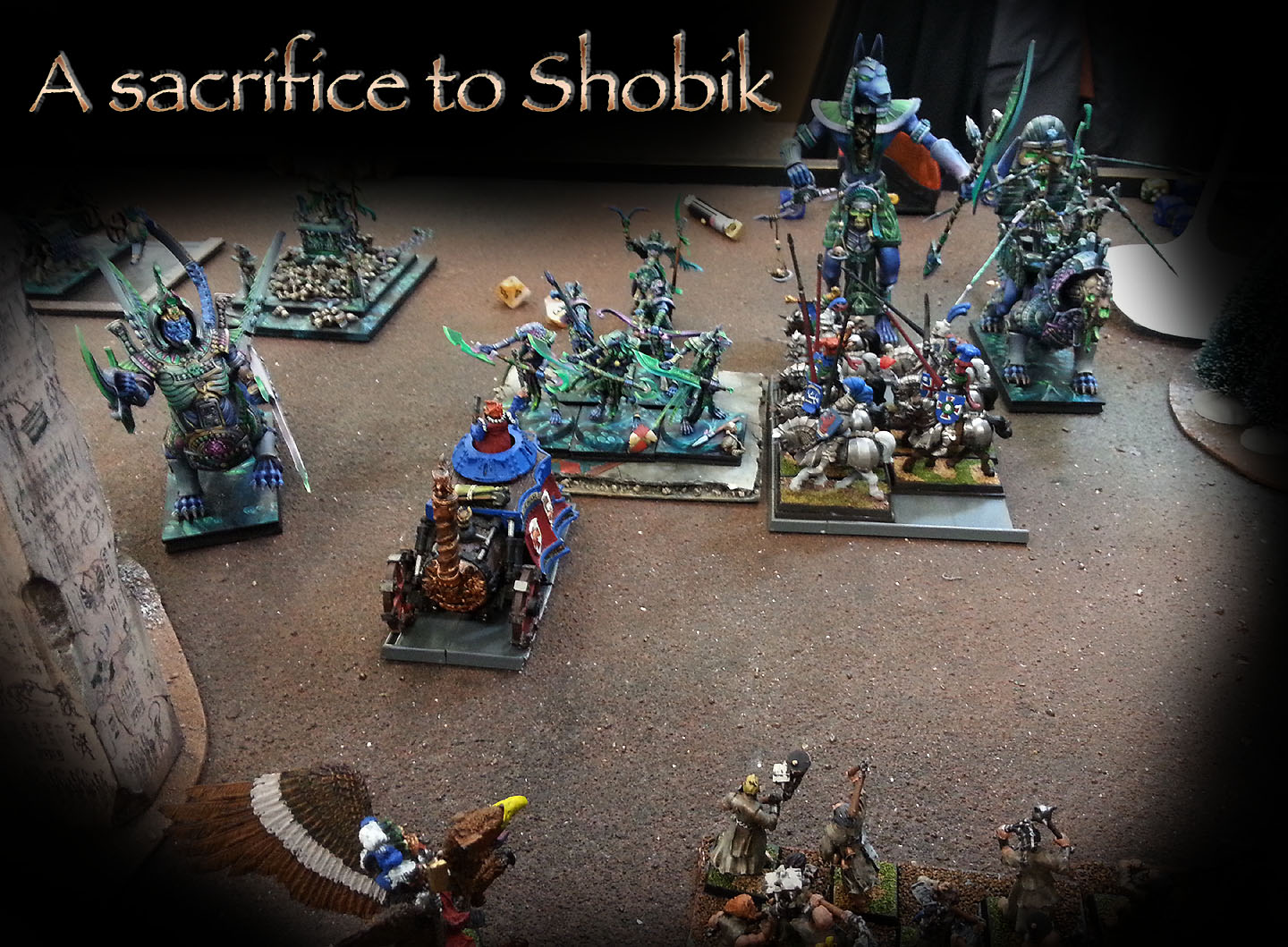 There was an avalanche of Inspiration around the valiant Guardians, but the second test was still not enough to keep them from being pulverized back into dust.  All that remained was to discover what would happen with the post combat moves.

Would my trap actually work?  Are the units that remain in the correct position even strong enough to do the job? 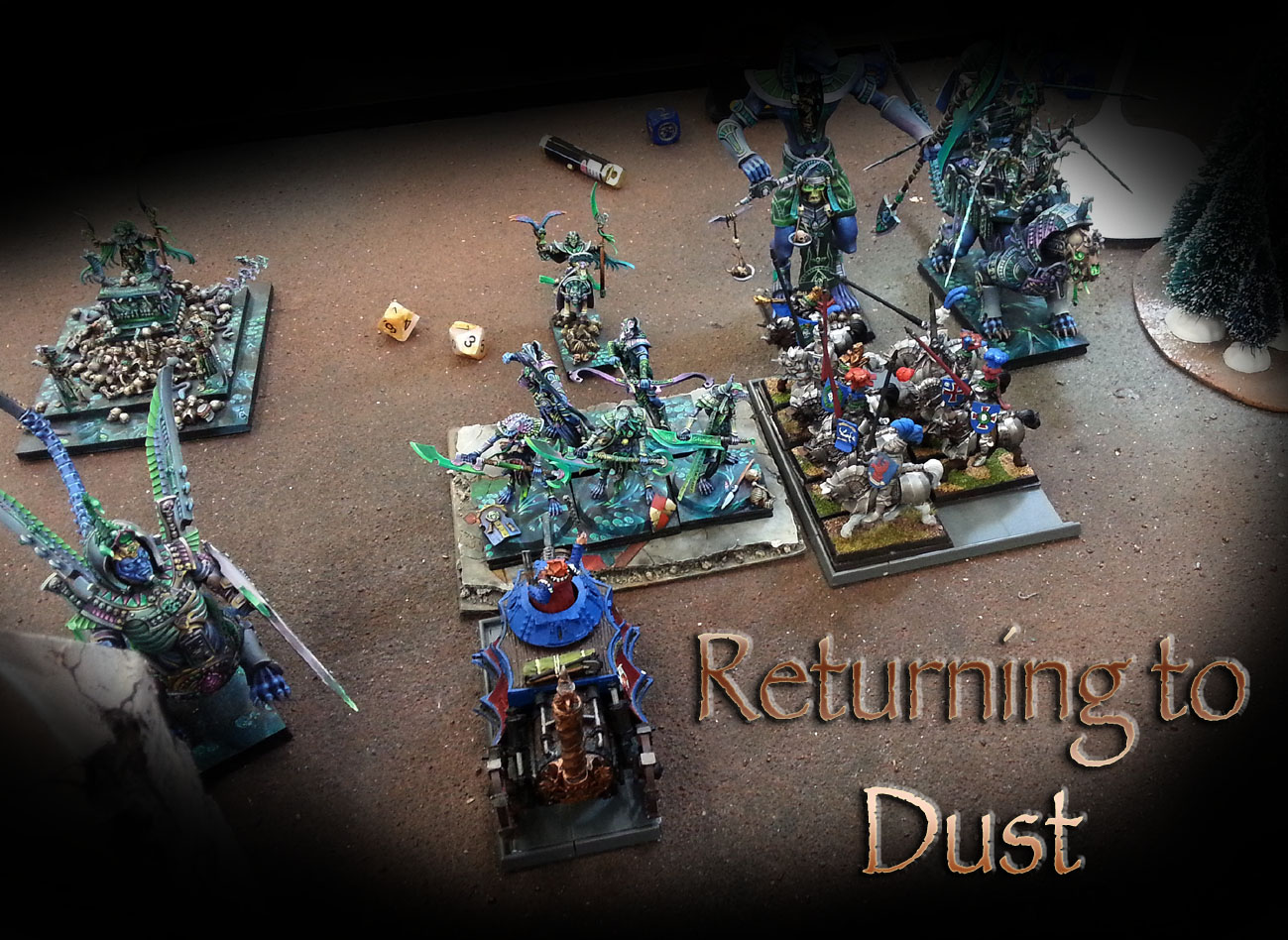 The trap appeared to work.  I was able to counterattack the knights, and the Tank was not able to block the charge of the Bone Dragon (Aka Necrosphinx) into the mounted General. 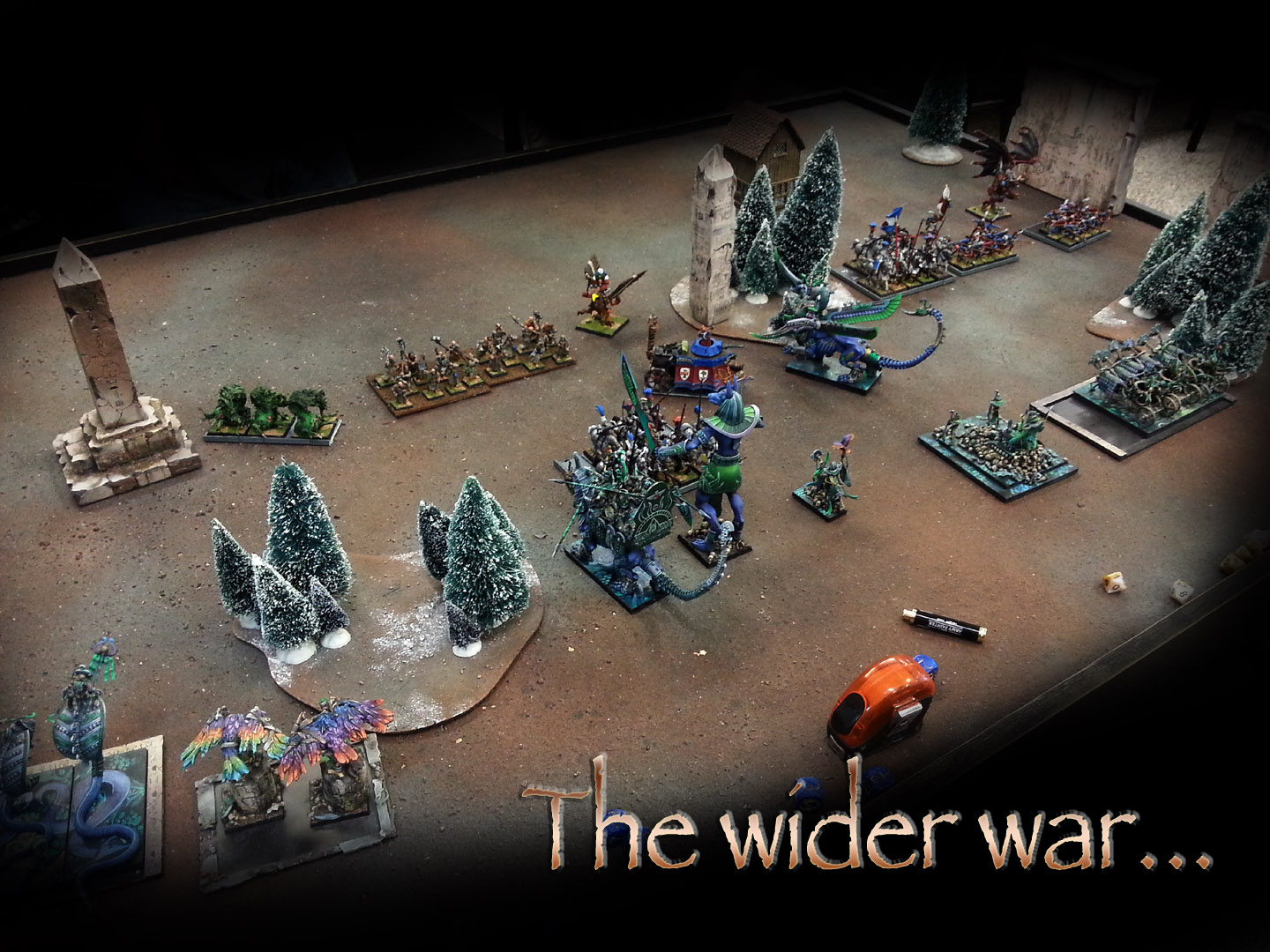 The charge of the Reanimated Behemoth and the Idol of Shobik smashed into the Knights, claiming revenge for the Guardians!!

The General survived the flank charge from the Bone Dragon, however.  Also, the Behemoth would be the possible target of the Flagellant unit.

Time for another sacrifice, then, and the Scavengers (carrion) were moved out to be a distraction.

Would the crazed Flagellants take this bait?  Could the presence of Shobik himself be enough to save the day for Pseusennes?

Find out in the next exciting episode... The Dust Settles. 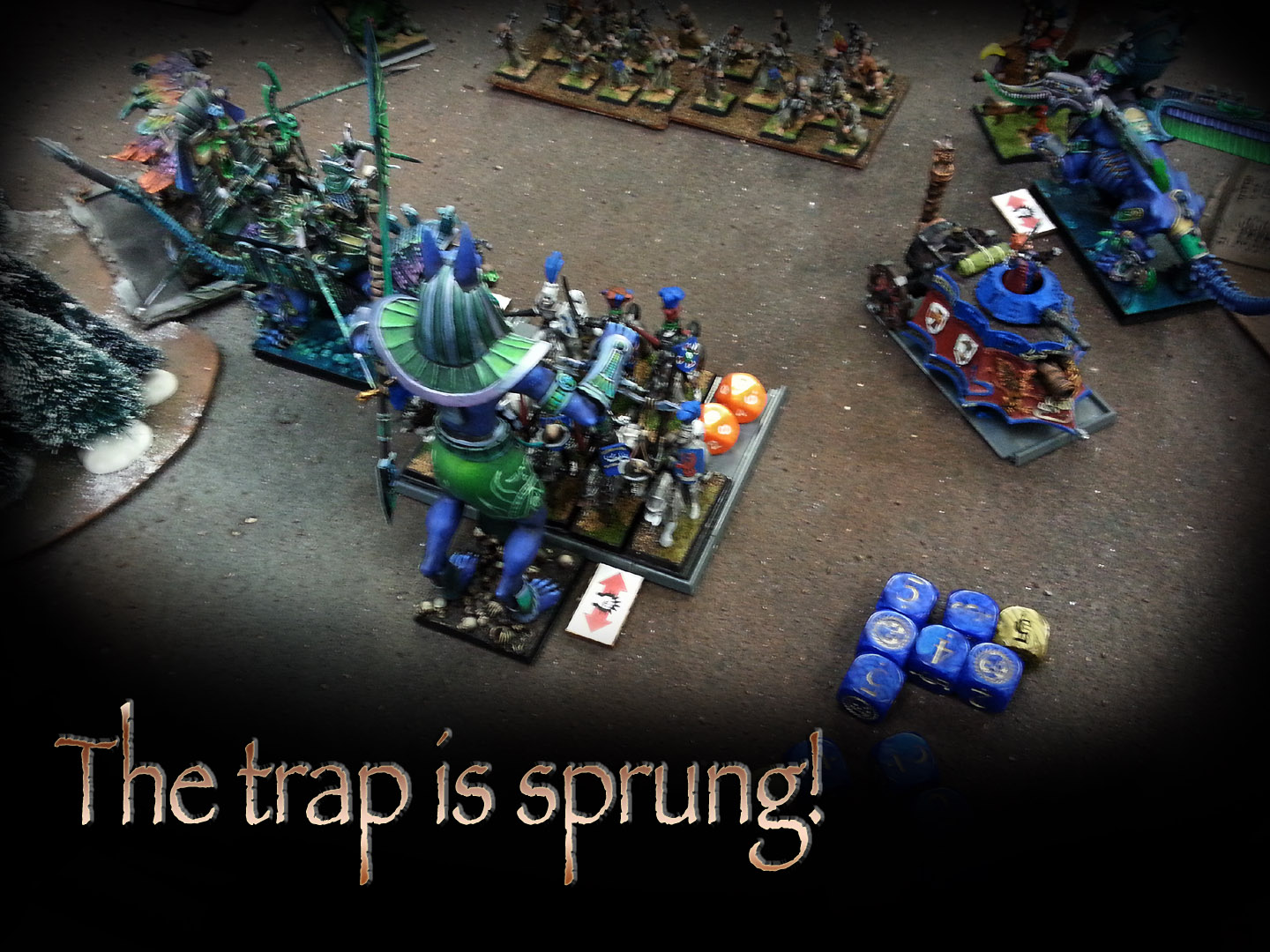 Posted by wappellious at 3:13 AM