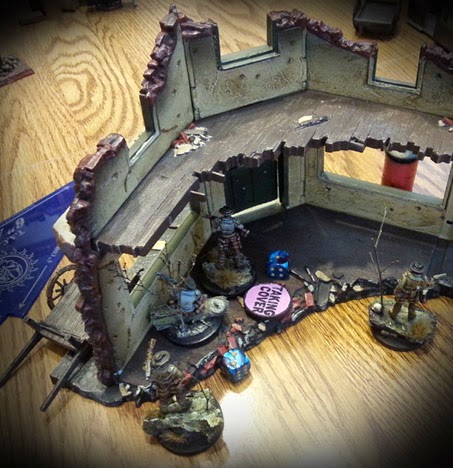 A little while ago the opportunity arose for Rich and I to play our first game of Wild West exodus.  You have seen me posting pictures of the Lawmen lately... and that's who I would be using in this first game

Here's Rich putting some more paint on his outlaw gang, along with some small pieces of terrain that he made. 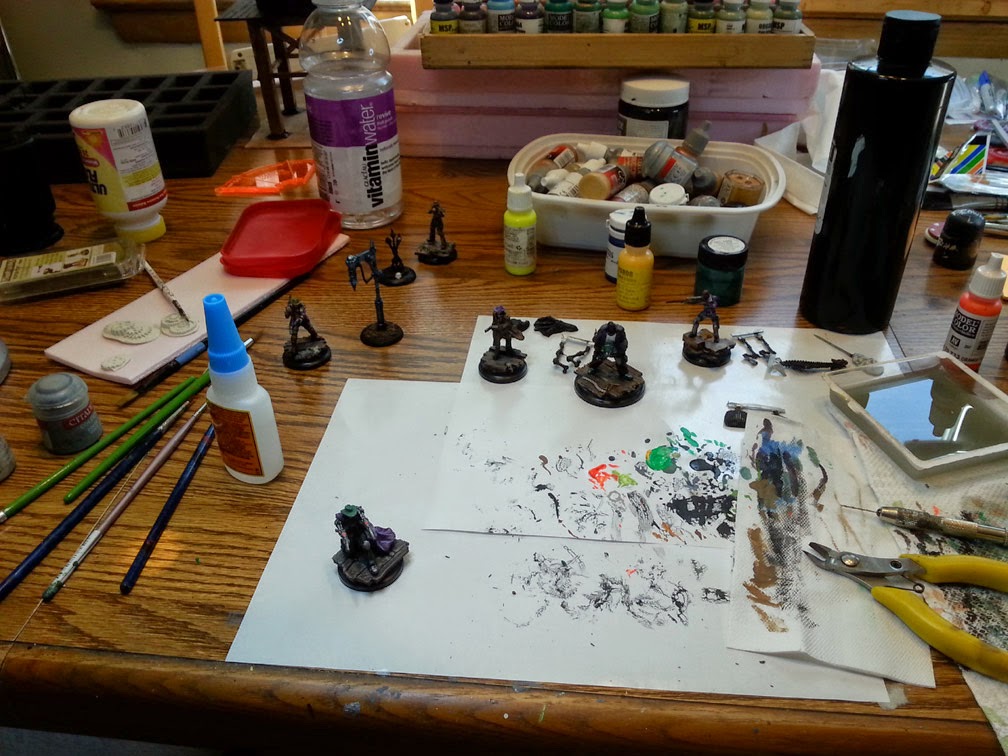 Meanwhile, I tried to get some paint on the Lawmen. 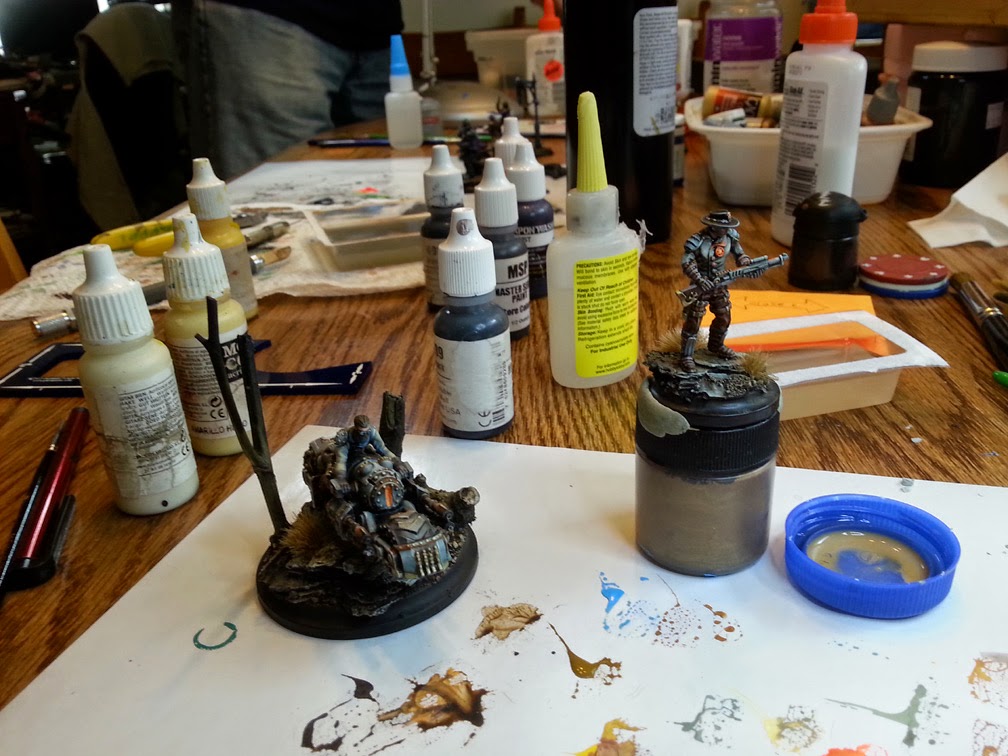 We quickly set up the table, attempting to have the widest variety of terrain possible so that we could see how that would work in the confines of the game system.  Rich made the water tower and the mesas on the left. 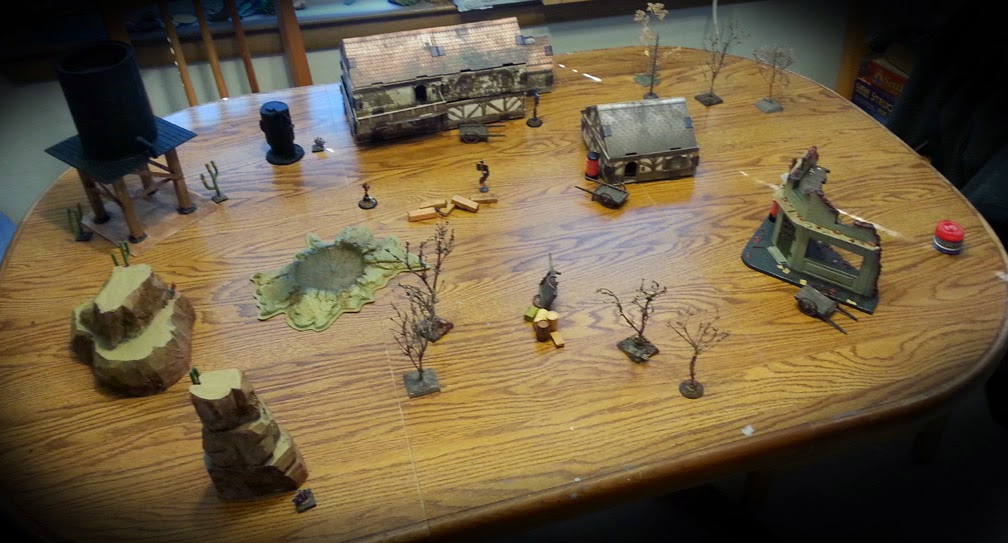 This piece of terrain was pretty neat, and we figured that it would play a prominent role in the game. 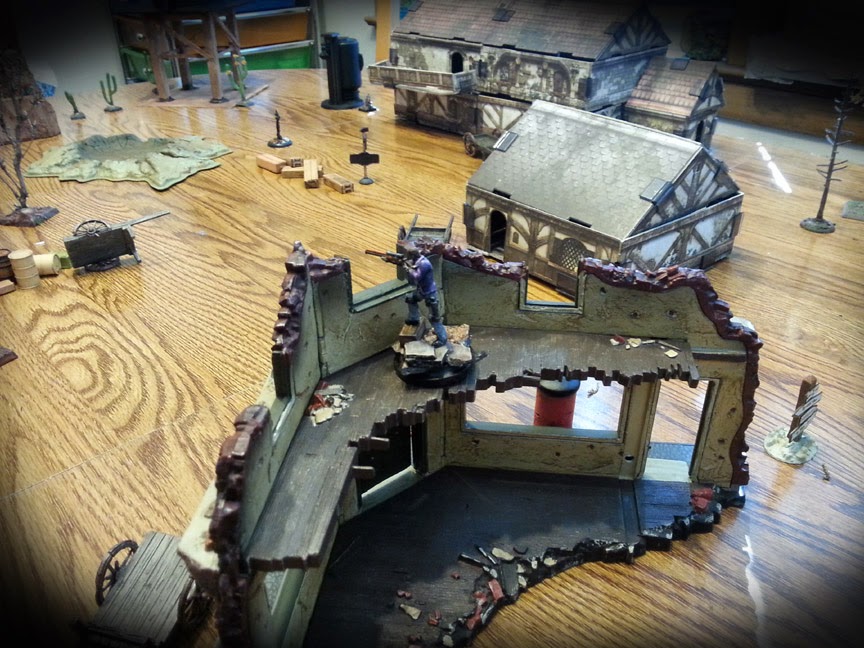 The little carts and barrels that Rich found were amazing!  They added a great deal visually, but would also be very important to the game play as well! 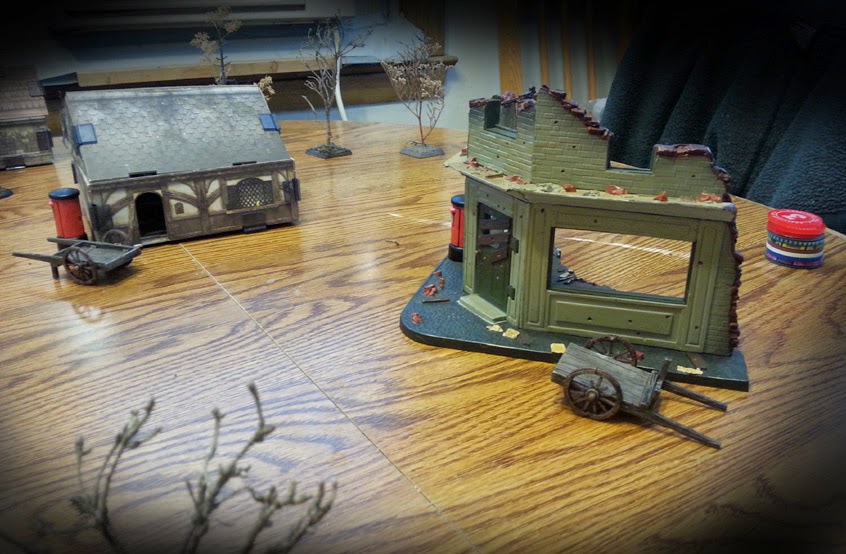 Since Rich's gang was coming into town from the left of this view, using these small blobs of cover would prove vital for him as the game moved on... 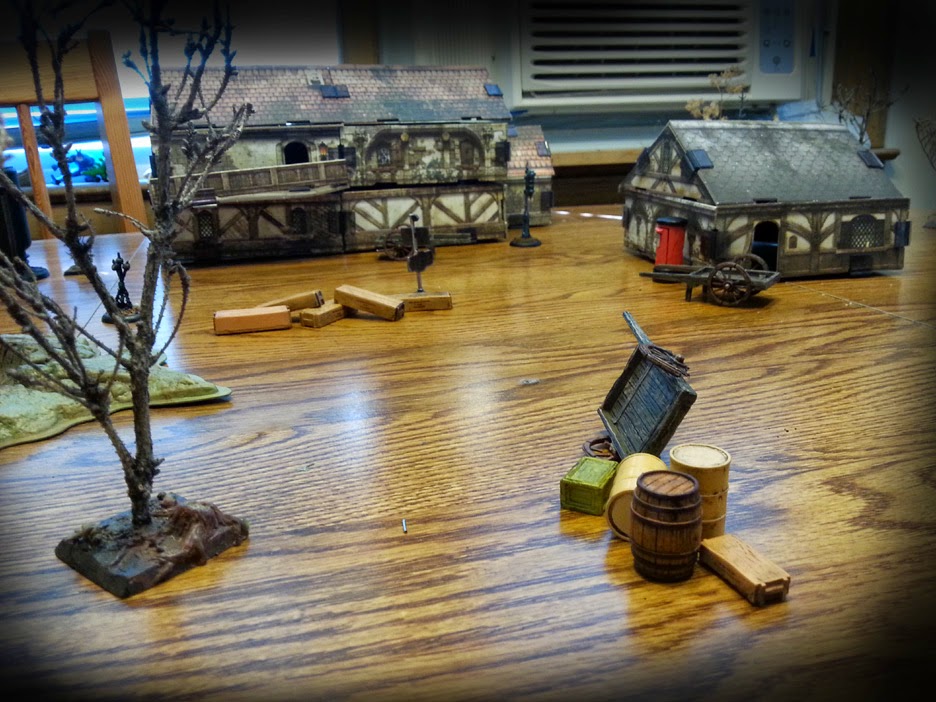 This was my setup to begin.  I had very little idea of what I was doing.

I knew that I wanted to take advantage of cover... but I also wanted to see how the special "Eschelon" ability worked for the Lawmen.  That is, they get a protective bonus from shooting attacks if they end up their movement shoulder to shoulder.

This is a bit like the riot police advancing on a crowd in a tight formation.  I would discover the difficulty in maintaining such a formation, since movement is alternating between players, and sequential. 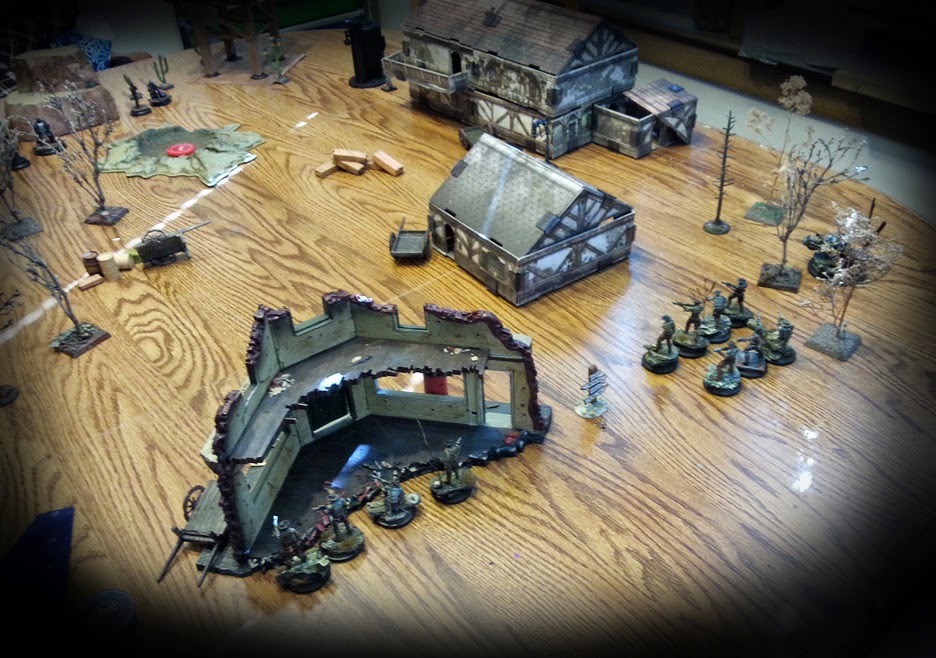 Rich was set up on the outskirts of town.  He had some snipers in his gang, and those would be very nasty, watching over the open spaces, looking to see if any Lawmen would be brave enough (or foolhardy enough) to step out into the street! 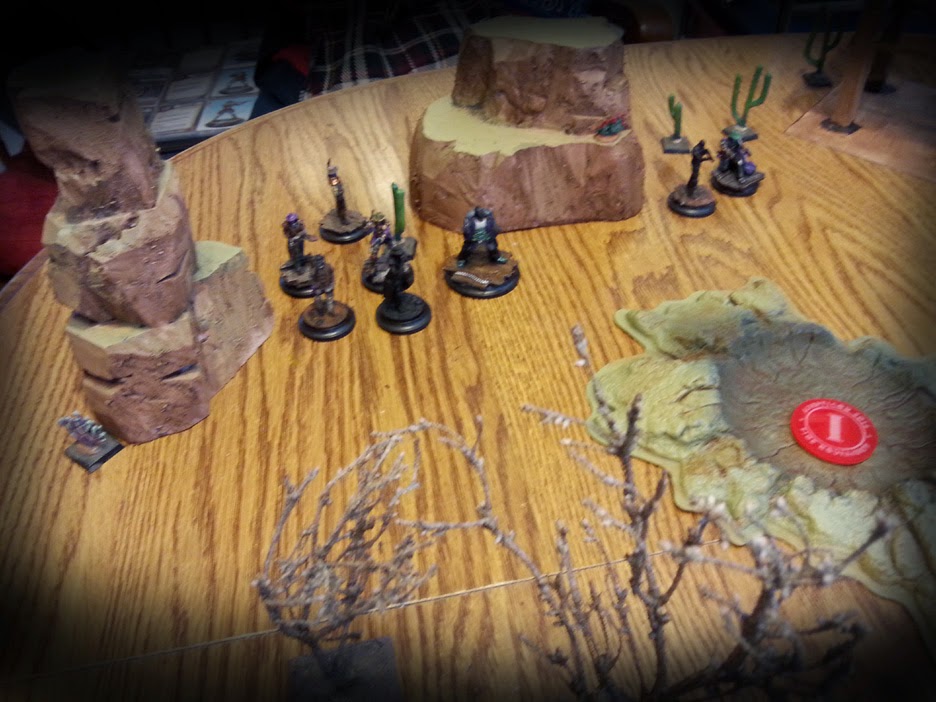 There's a mix of things in this group.  The Boss, Wyatt Earp, along with some special weapons, close combat guys and riflemen. 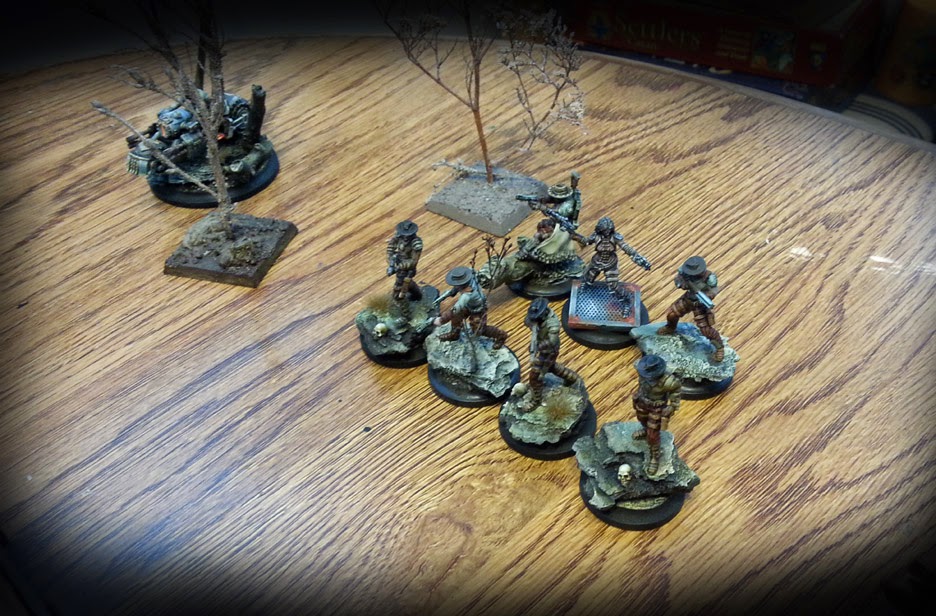 The Lawmen in this structure were almost exclusively riflemen.  I did out one hand to hand guy in there as a surprise. Plus, I would learn that he would have the ability to pop out of the structure and do some interesting combinations. 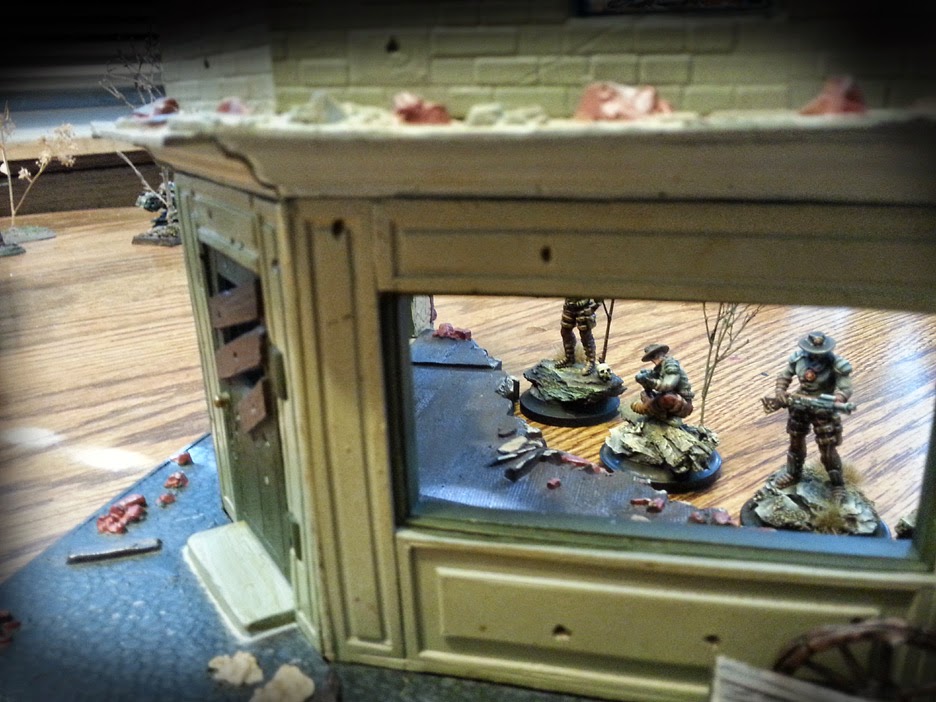 Movement in this game is very different.  You "activate" one to three figures (or groups of Hired Hands).  You use action points to get them around.  It can make it very difficult to get everyone exactly where you want them to go in a rapid fashion.

Also, the Lawmen move more slowly than the Outlaws.

This was one of the nice things about the D10 system that WWX uses.  You can have more subtle differences in the stat lines of various factions without creating gargantuan statistical differences between factions.

The difference between a Ballistic skill 3 to 4 in the D6 world is HUGE, while the Marksman skill differential of 5 to 6 in D10 is way more manageable. 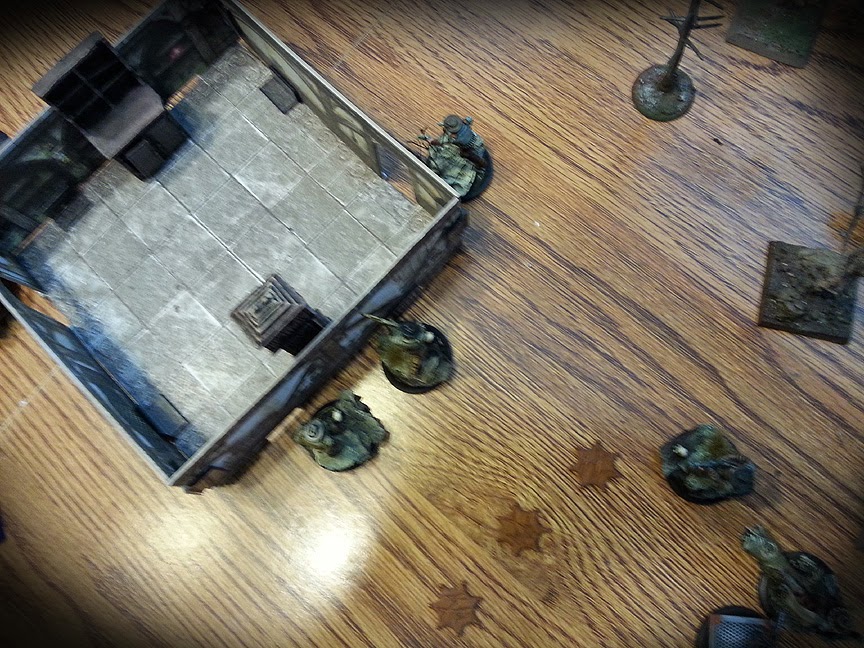 You can also purchase a variety of booby traps.  They each do something different.  These are not game breakers, but they can do some area denial, such as the crater! 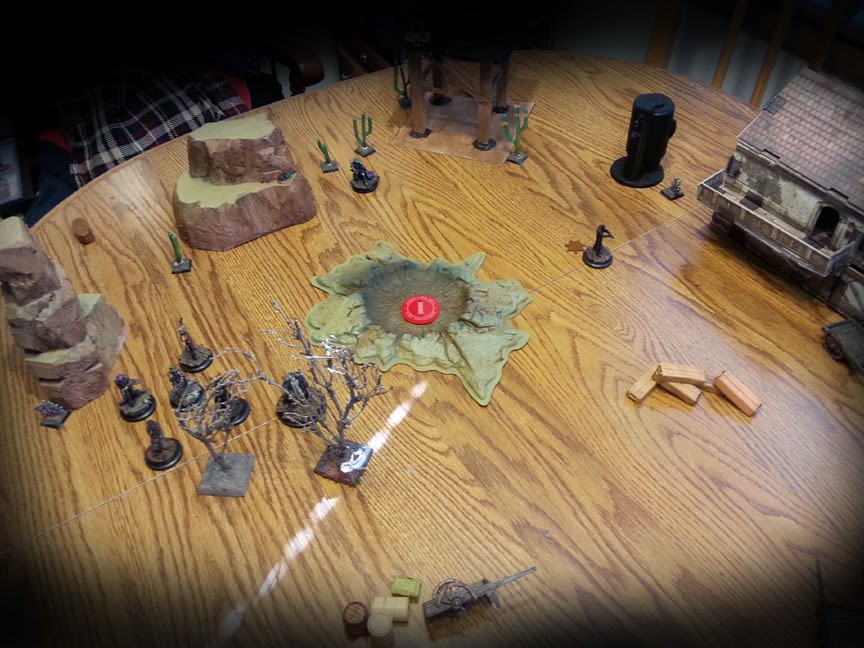 I tried to stay out of the range of the snipers, but also keeping the advancing Outlaws in my rifle range.

I also wanted to set up as many different firing angles as possible, in the hope of minimizing the cover that the Outlaws would have as they advanced forward.

The fact that you don't move all your guys in one fell swoop is very different.  In fact, you can choose to move only 1 guy, attempting to see what the opponent may do. 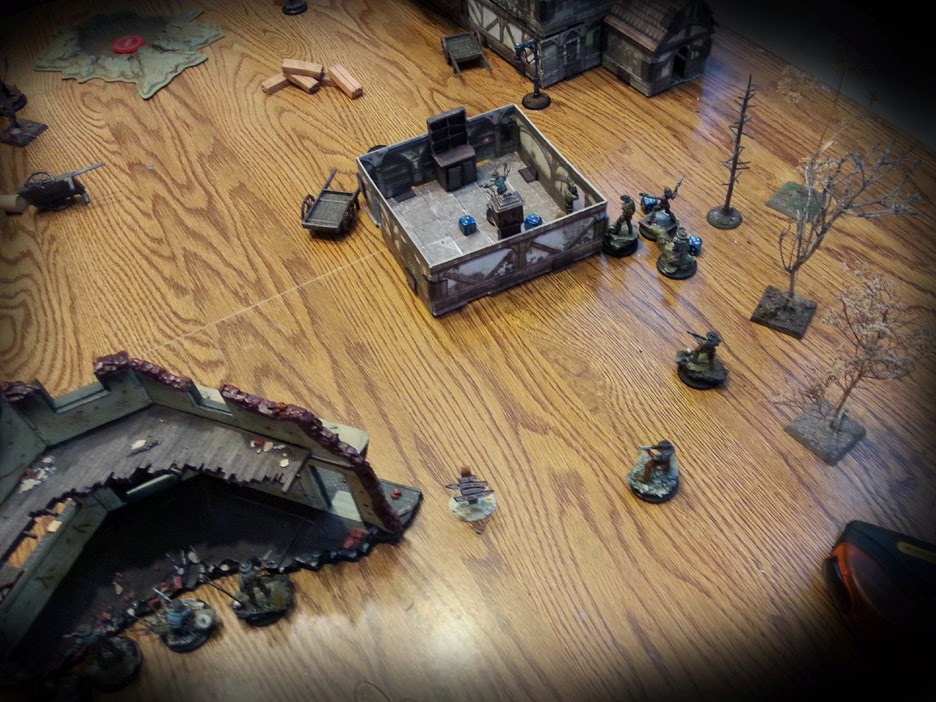 It is all about action and reaction, which is what we were hoping for! 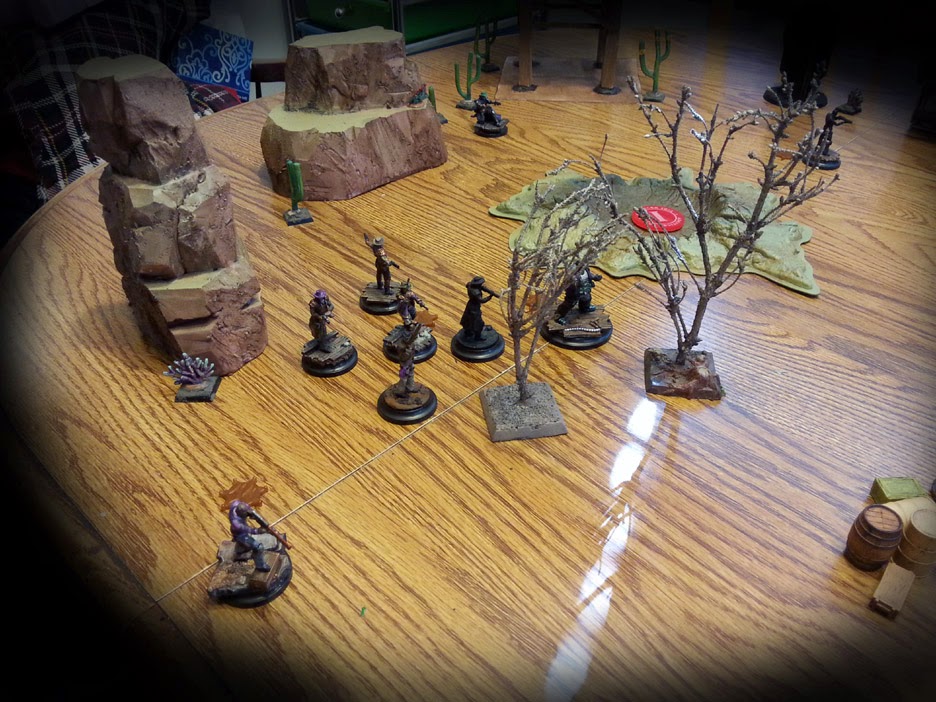 You can also spend your precious Action Points on a variety of tasks.  I would discover that you can be better off just ducking for cover, instead to trying to take every last shot that you can.

I can see that you have to be more patient, just like Memoir '44.  Sometimes that one possible shot is better off being passed up in order to set up your overall positioning... and playing for future turns and reactions to what the opponent does. 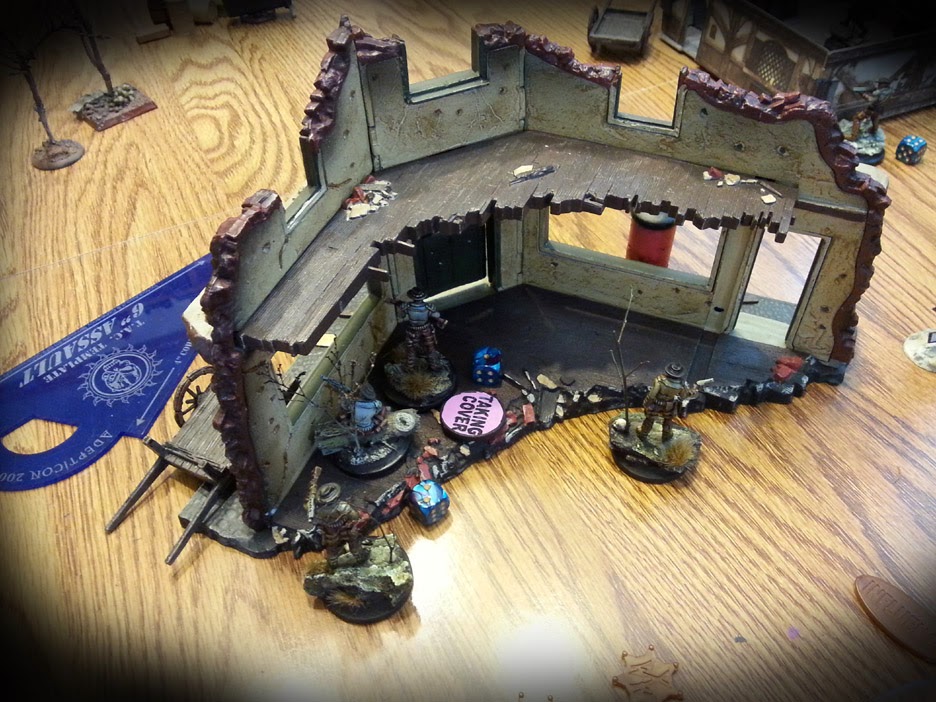