Racing ahead with the Reaver Jetbikes: Adepticon 2013 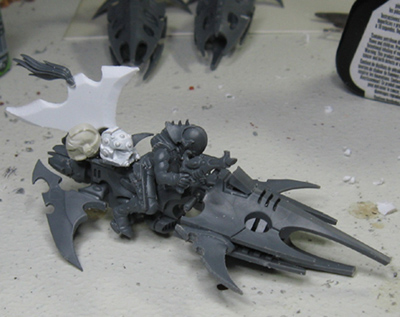 Under the ever watchful eye of Sammy, I continued to work on the quick Reaver conversion. 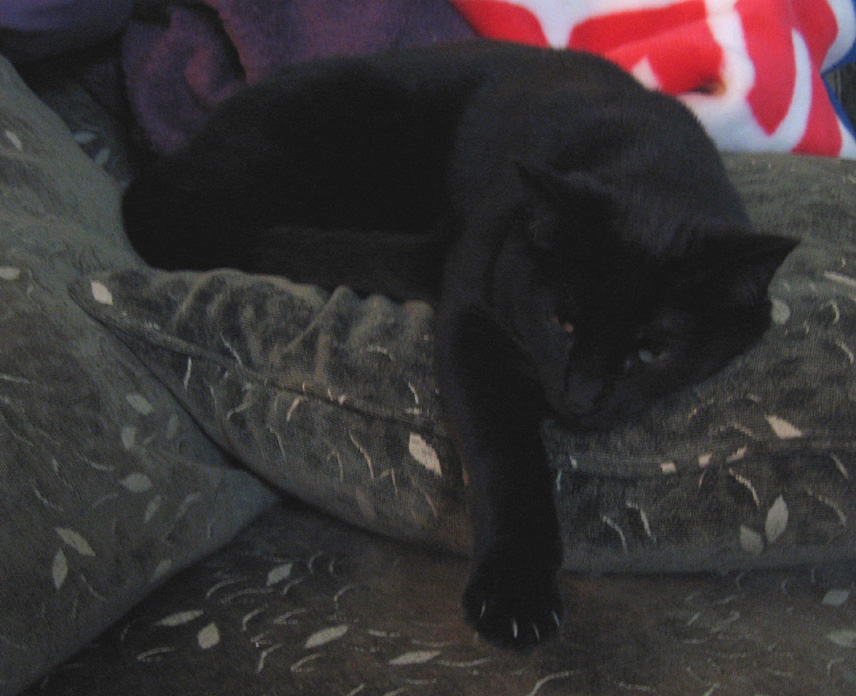 I noticed on the regular version of the jetbike sprue, you have a rear fin that has some tassles hanging off of it.  However, they are "tied on" through a hole in the back fin.  I started out by using the pin vice to start the hole, and then did the rest with an exacto knife.

I also added a few space marine helmets for trophies! 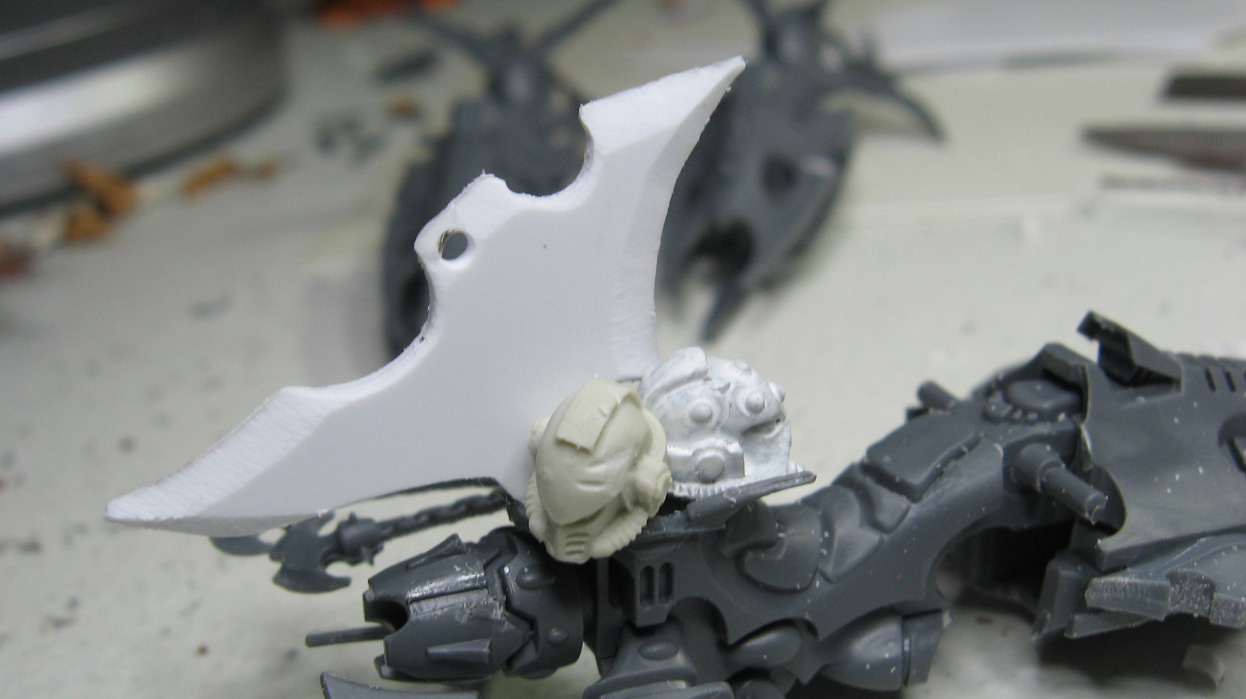 I had clipped off a bunch of the hair bits from unused Dark Eldar heads, so they were perfect for the task at hand! 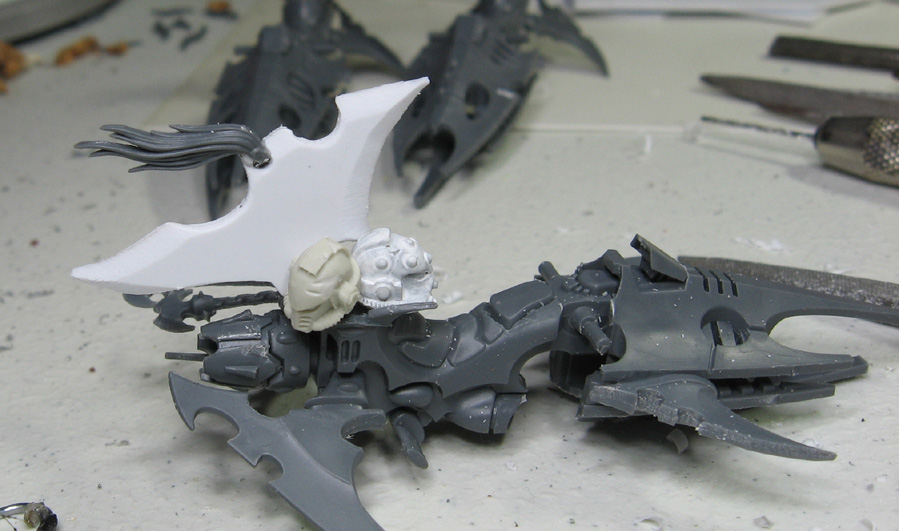 I added a skull on the other side... 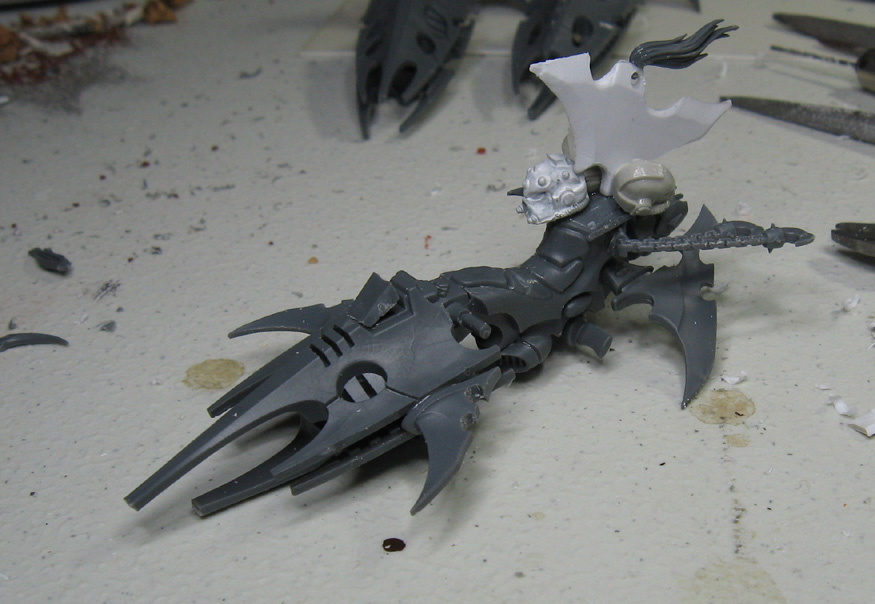 And placed the rider.

During my first test game, I didn't realize that the riders also had splinter pistols.  I thought they should have a bit more close up firepower than just the splinter rifles!  Yeah, it's not exactly a bunch of heat lances, but every bit helps.

To remind me in the future, I am going to model as many as I can with splinter pistol arms from the Wyche sprues. 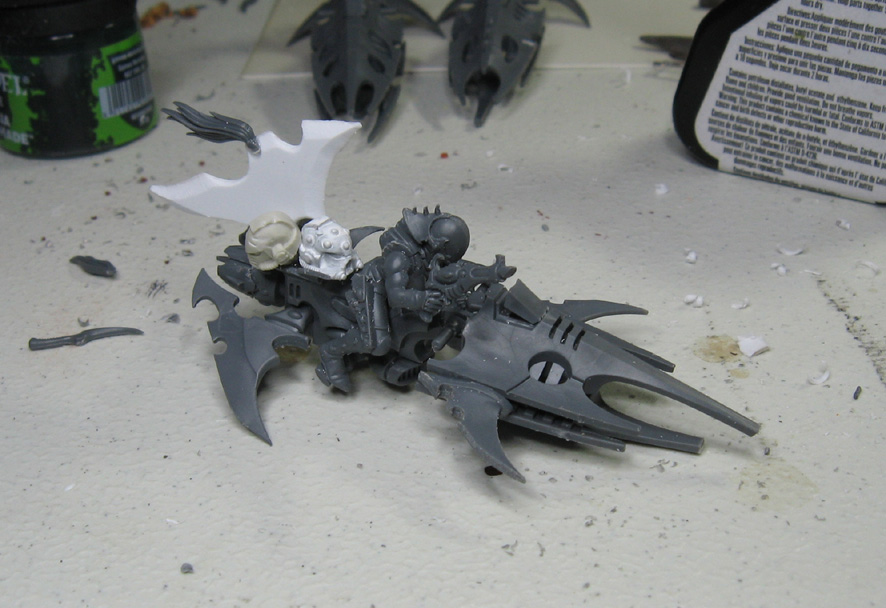 If you have done that search on the previous jetbike conversion posts, you will have seen a few of the bikes had a second cowling added to the front.

I did this to get more variety, but also some more places to do color and freehand.

My hope is to paint the undersides of the cowlings with a glowing effect.  We shall see how that works out in the first color test! 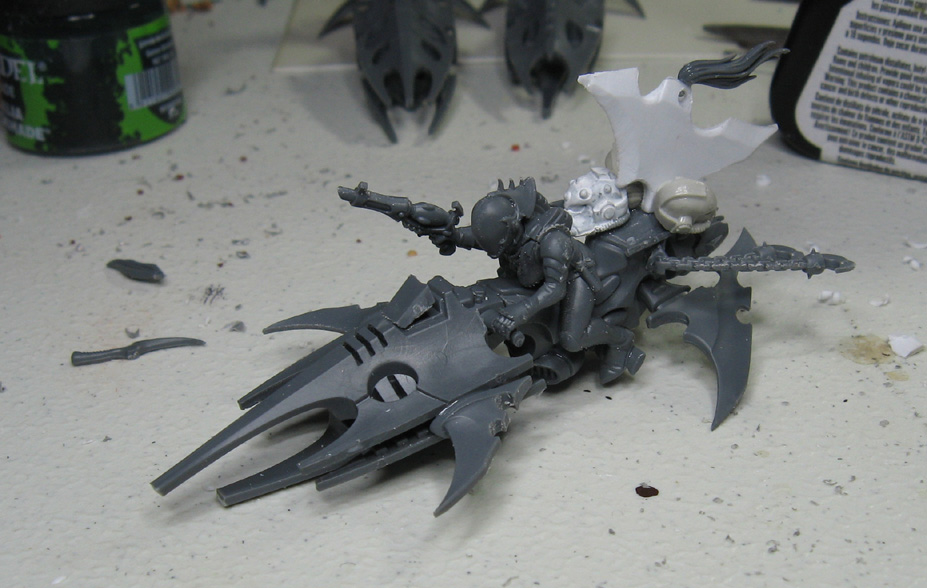 I added a second hair bit to the rear fin, and a combat knife.

These are not the most dramatic conversions in the word, but the bases are going to have some fun surprises on them.  In fact, these conversions will hopefully set up some very cool opportunities to have some space marines in the process of being hacked apart by the bladevanes of the jetbikes.

I will be learning a lot about making flying blood spatter and cast off with this project! 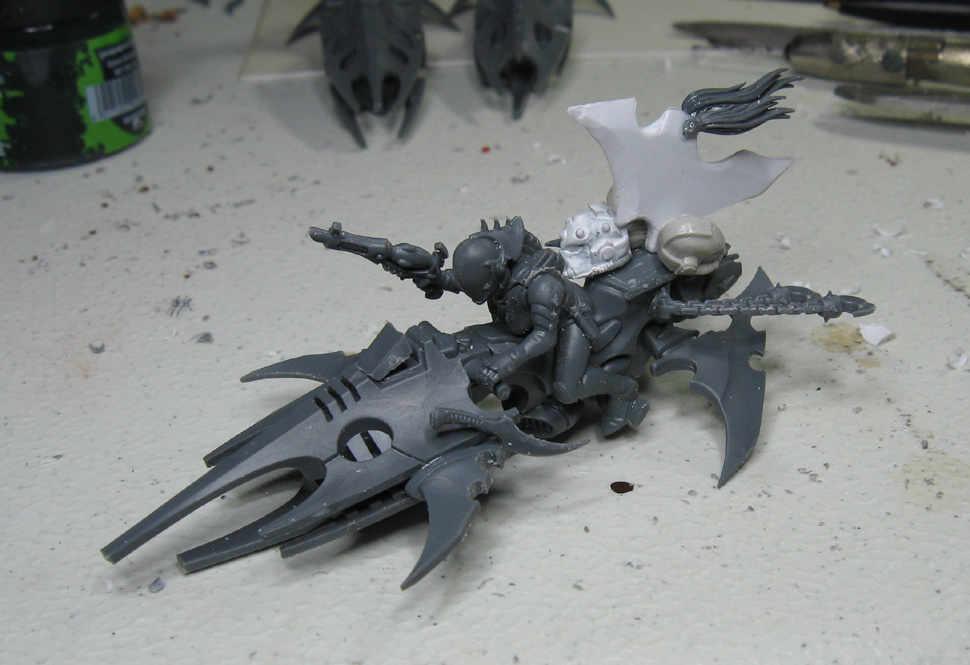 Posted by wappellious at 7:21 PM 2 comments: 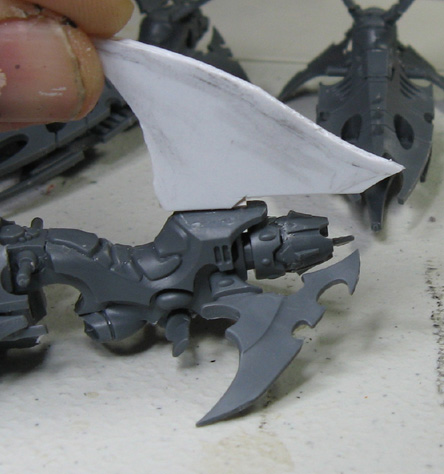 For those of you familiar with my Adepticon 2013 Dark Eldar project, you know that the army is based around jetbikes.

The story of the army involves rival Kabals of bikers who have temporarily joined forces to conquer an Imperial world that has a fantastic Hippodrome!  These Kabals are normally rival racing teams... hence the value placed on such a great place to show off their rides!!

I have a bunch of them built already, many of them with a bit of conversion here and there (you can search with the 'search bar' on the left hand column to find them).

I am making them as unique as possible, since I have lots of cluster caltrops and various weapons, so I want to be able to distinguish them from one another easily from one another. 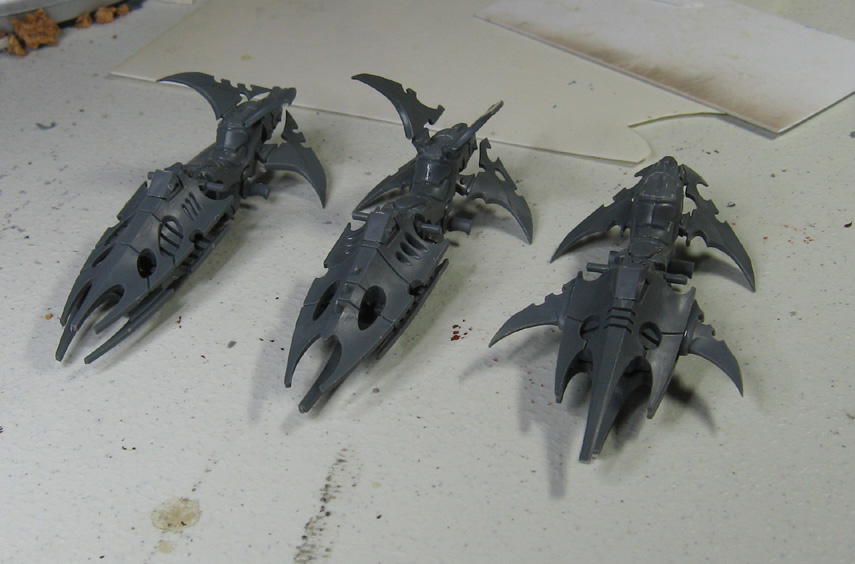 To make an extra rear wing, I glued together a few pieces of plasticard together. 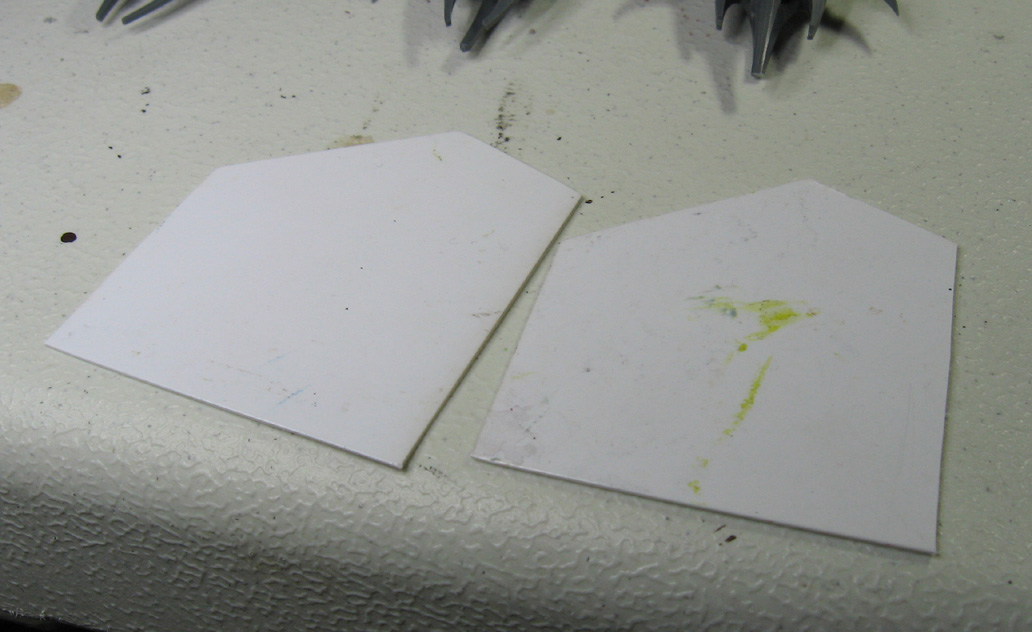 This gave me some decent thickness to work with... 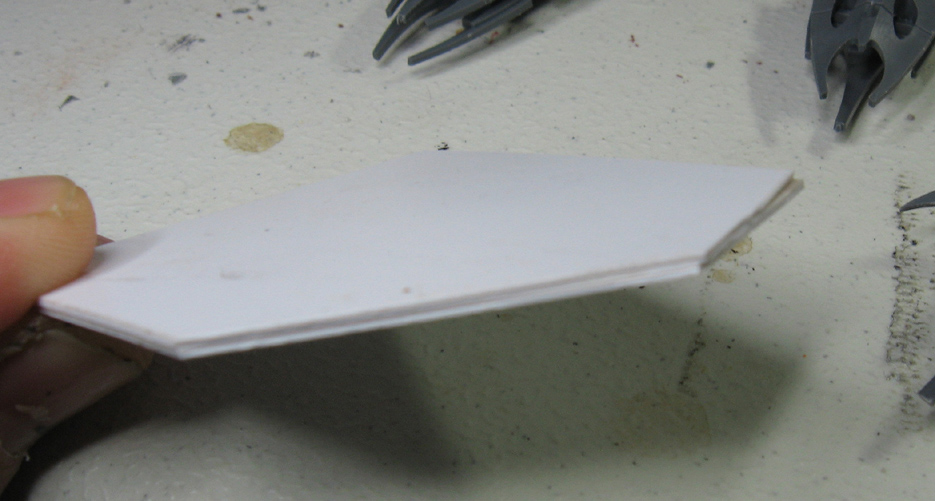 A rough pattern is drawn out... 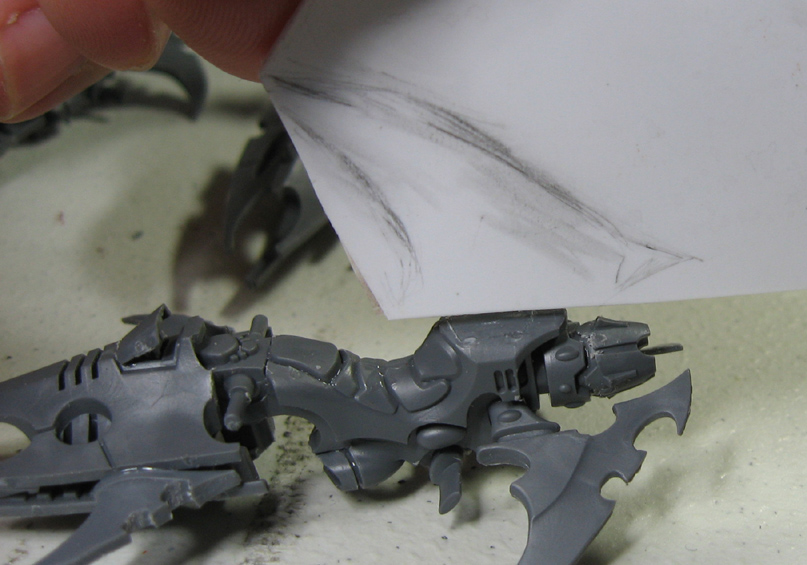 Followed by a rough cut. 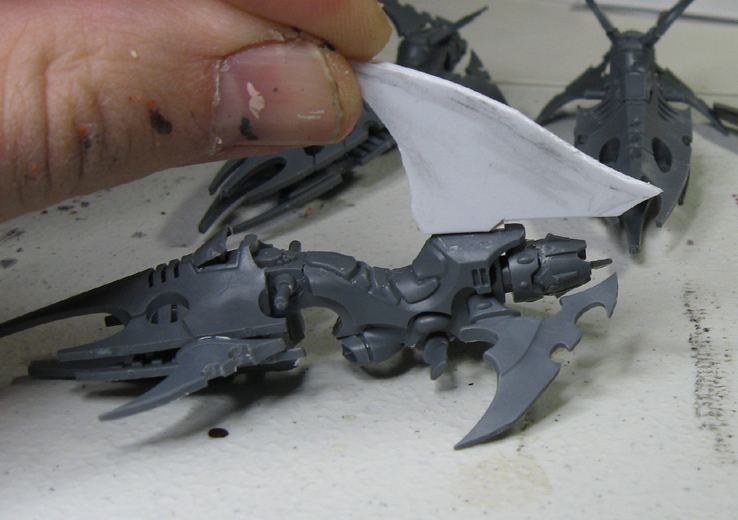 The next step is to start creating an edge on the wing.  The rough cuts are done with an exacto knife. 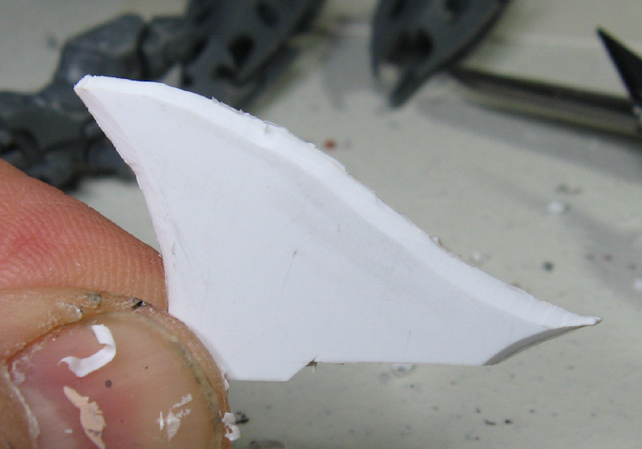 I took a few files and worked on the edge some more.  Then it was time to do a few cuts into that edge. 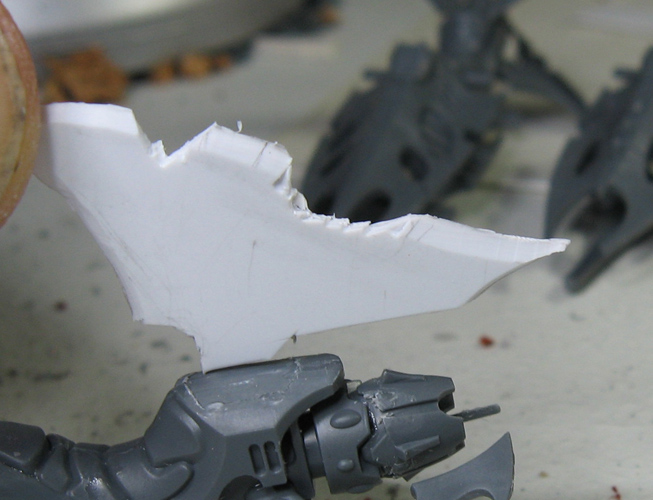 Once the shapes are positioned, a round file is used to do the rest. 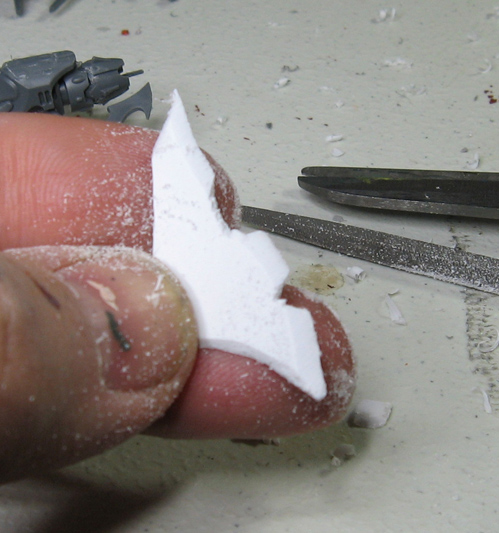 While there is more work to do on the wing, I wanted to get it glued down to see what I wanted to do with it next... 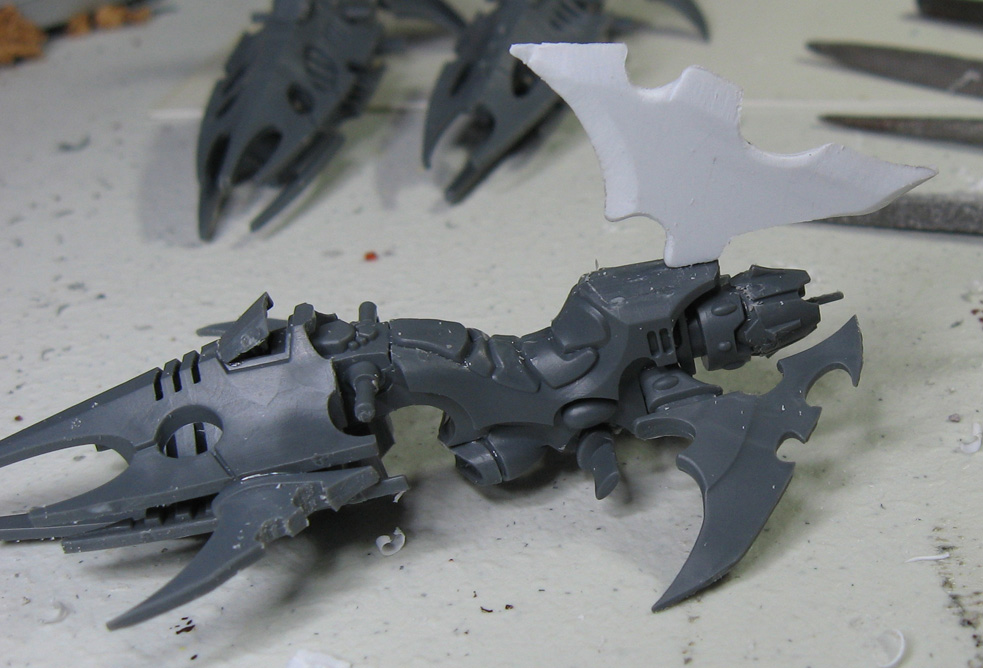 After gluing in a few little blades from the jetnike set just below the wing, it was time to add a few trophy helmets.  Those extra little bits were perfect for holding the helmets into place.

Some razorflails from the Wyche sprue made a nice little addition as well.

I will post the rest of the images later tonight.  Now I have to get back to more video camera tests!

A solid base for Mordor: The rest of the lava effects 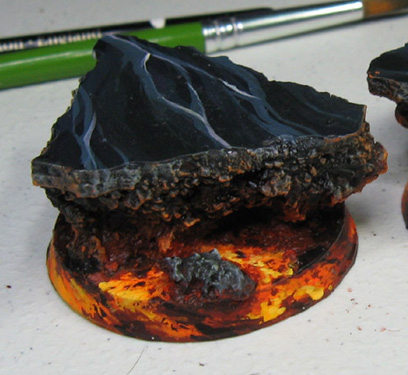 As the Army/Navy game was drawing to a close, I was getting to the latter stages of my test bases as well.

So, I had set up my lightest colors for the glowing lava, which meant that I could now put some transparent layers of fluorescent orange over that layer.  The Fluo paints are naturally transparent, so you don't even have to thin them down.

After the initial layer of fluorescent orange, I added some of my reddish brown to that and did some darker portions around the masses of cooling lava.

That color gets progressively darker, and eventually I start adding black into that mixture. 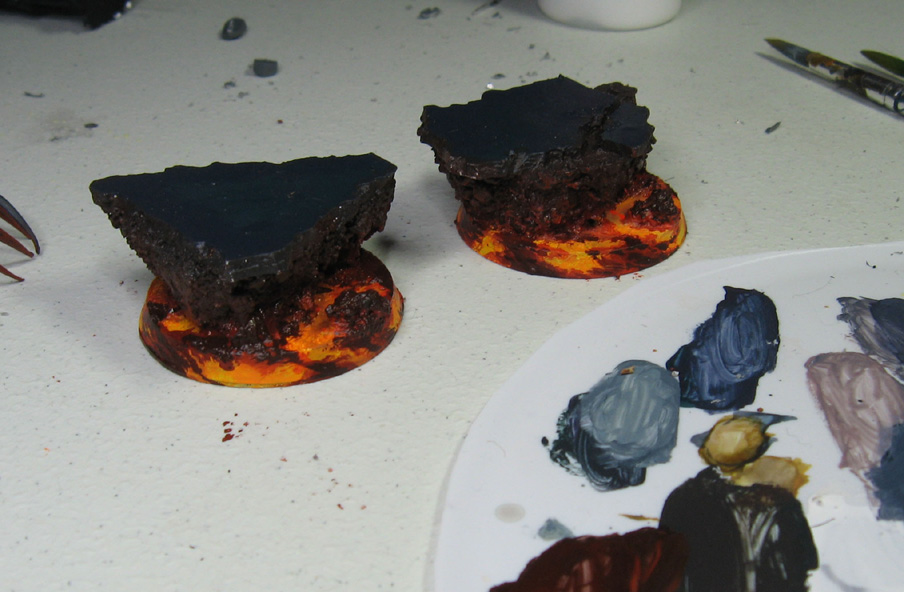 Some of the orange is drybrushed on the underside of the rocks to get lava reflected light.  Meanwhile, on the upper surfaces, I do some cooler dyrbrushing by mixing a very dark brown with a pale green. 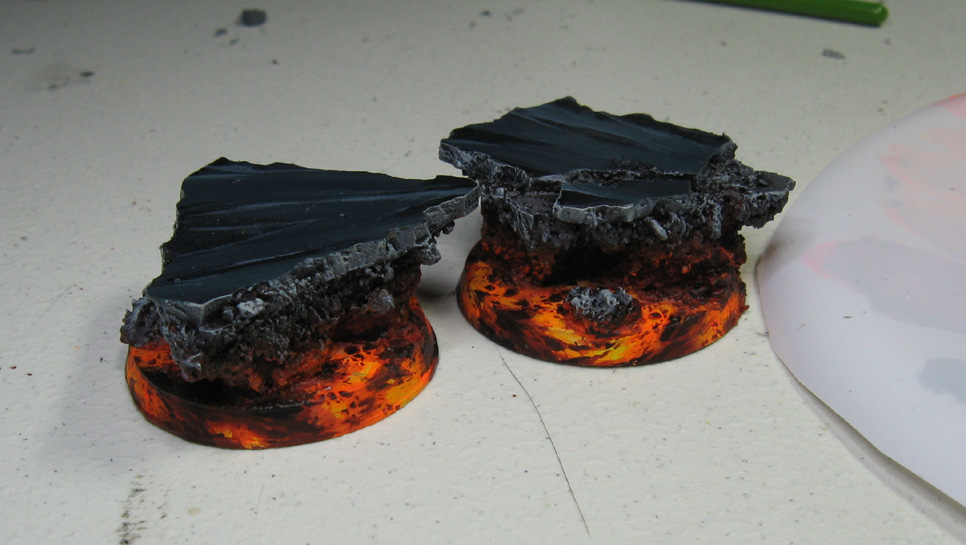 I did some more orange lava reflections and some more drybrushing on the upper areas.

As that stuff dried (in addition to the black/brown washes), I worked on the black marble on the top.

I had a shadow grey mixed with a blue green put down as a middle tone layer.  The veins would be lightened further by mixing in that same pale green color. 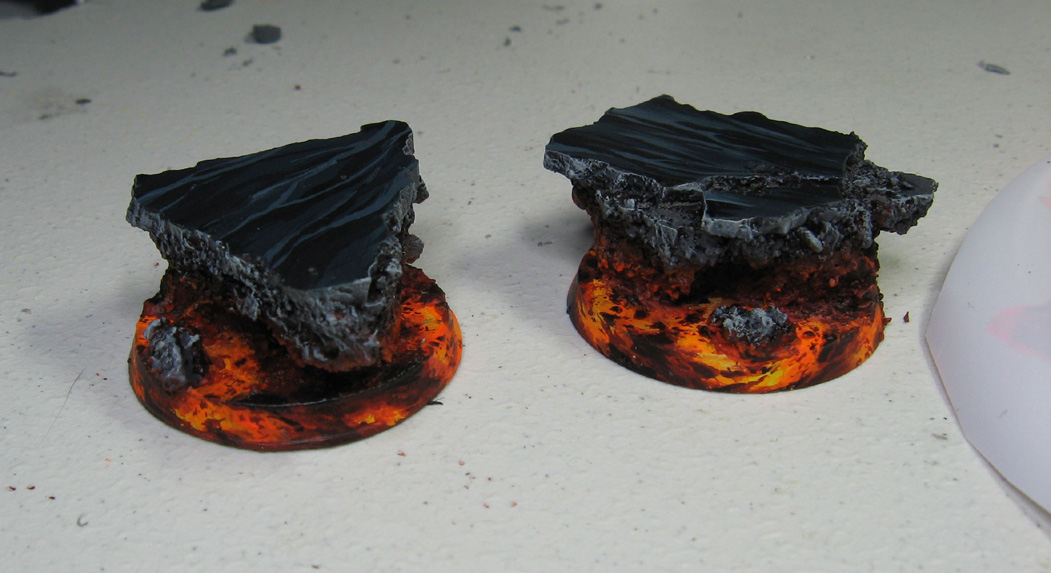 The pale green is lightened a bit, defining the veins a bit more... 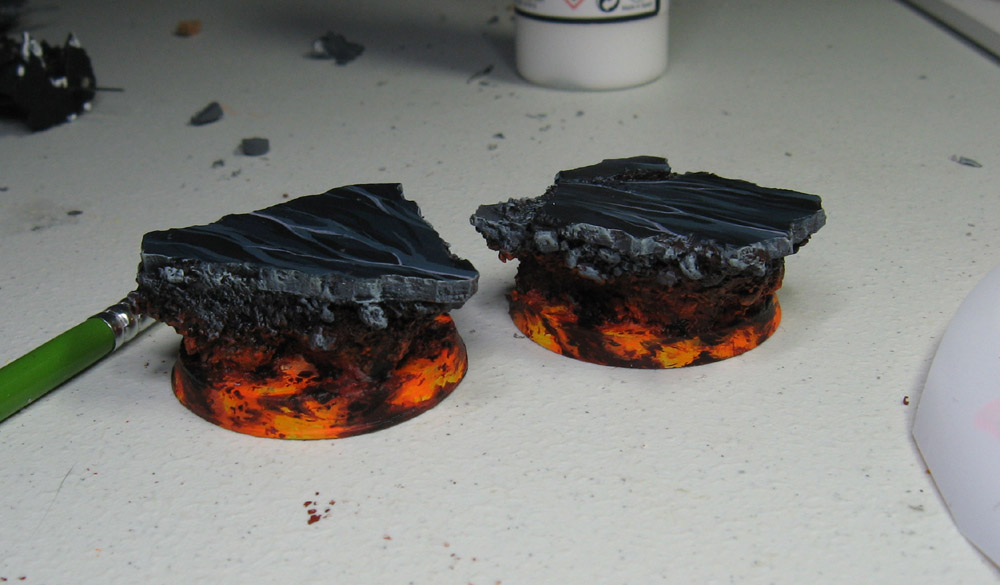 And this is our ultimate result... 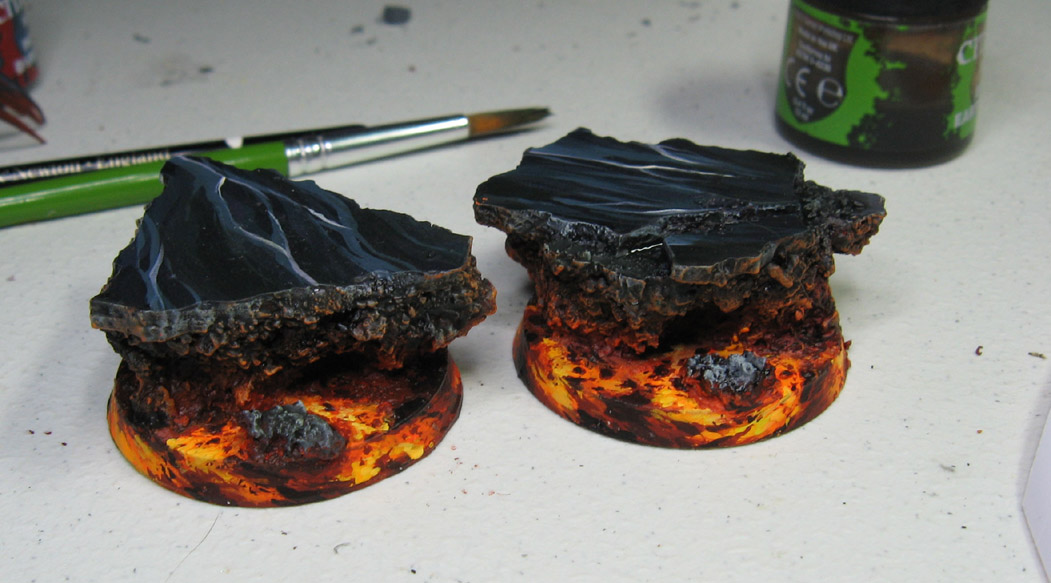 Posted by wappellious at 2:02 AM 2 comments: