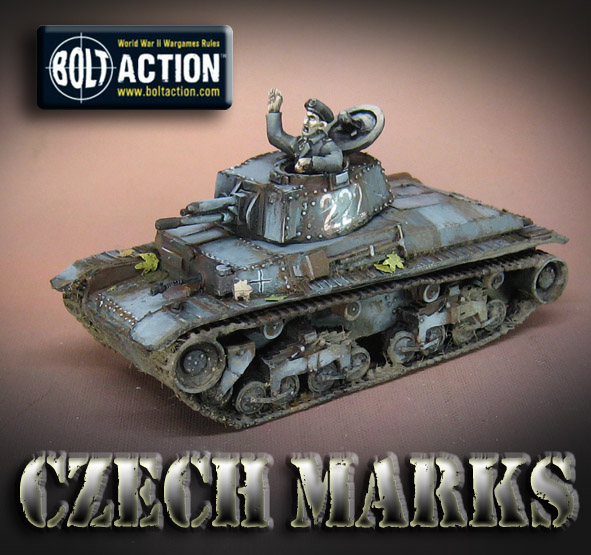 We "Czech off" one more early war vehicle for the German army with the Panzer 35T, manufactured in Czechoslovakia.  This was considered a medium tank at the time, but it soon was passed by the German Panzer series.

You've already seen the 38T, which is another Czech design.  That chassis would continue as a self propelled gun, but this kind of wheel assembly would only live on in Hungarian and Italian tank designs.

I have another blog post that dives into the painting of this vehicle, so here's a link for you!

The 35 and 38 series comprised a large portion of the German tank forces during the Sickle Stroke advance into the Ardennes, which was a big surprise to the original German player in our group!  In fact, Ronmel himself rode atop a 38T.

While these are not very powerful, you do have the option of picking veteran tanks in both Czech designs.  The points cost is also lower than a Panzer 3 or 4.  This design has proven itself to be quite capable in games, bringing just enough firepower without presenting a large target, which the Panzer 4 would do.

I will shoot some group images of what I have thus far so that you can get a sense of the size comparison.

Posted by wappellious at 1:09 PM 2 comments: