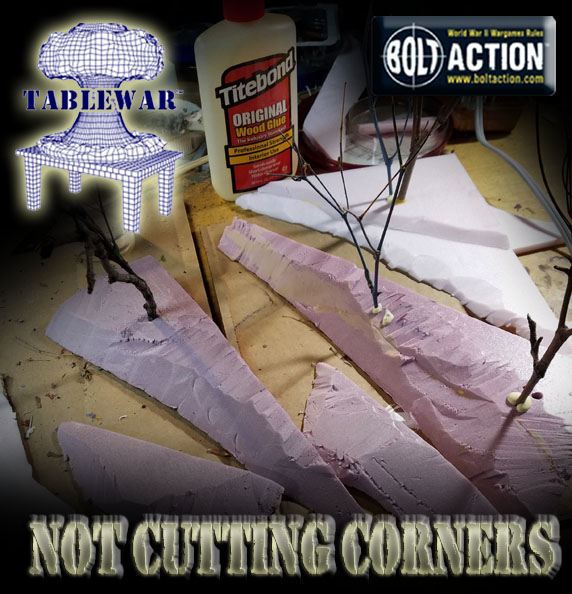 This is one of the last follow up tutorials on making your terrain mesh more readily with your battle mats.  For thos who have seen this series of articles, I started with a forest mat from TableWar, and constructed a hilly forest set of scatter terrain.  There are 4-5 articles on how all that was done, with a link below.

When I created my painted backdrops (also shown a series of how to posts), I noticed that I needed to create a few more "corner pieces" which would hide the seams of my painted backdrops.  These would not necessarily be occupied pieces of terrain, but something that could support some foliage. 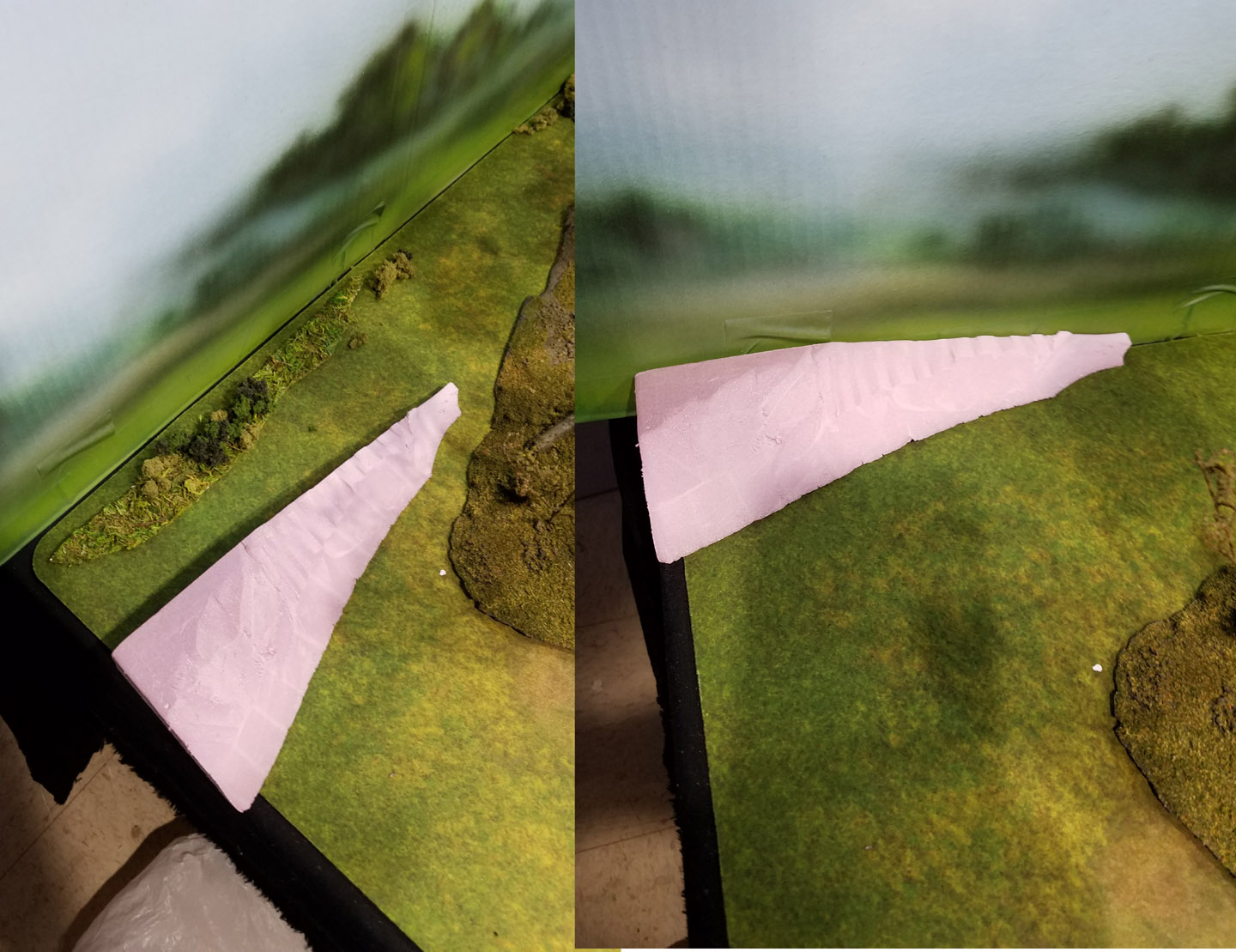 As you can see, I took a few left over pieces of pink foam and formed it in a small hill, where I could place a tree or two..  I tried to make it so that these pieces could be used in two directions, covering more than one corner joint. 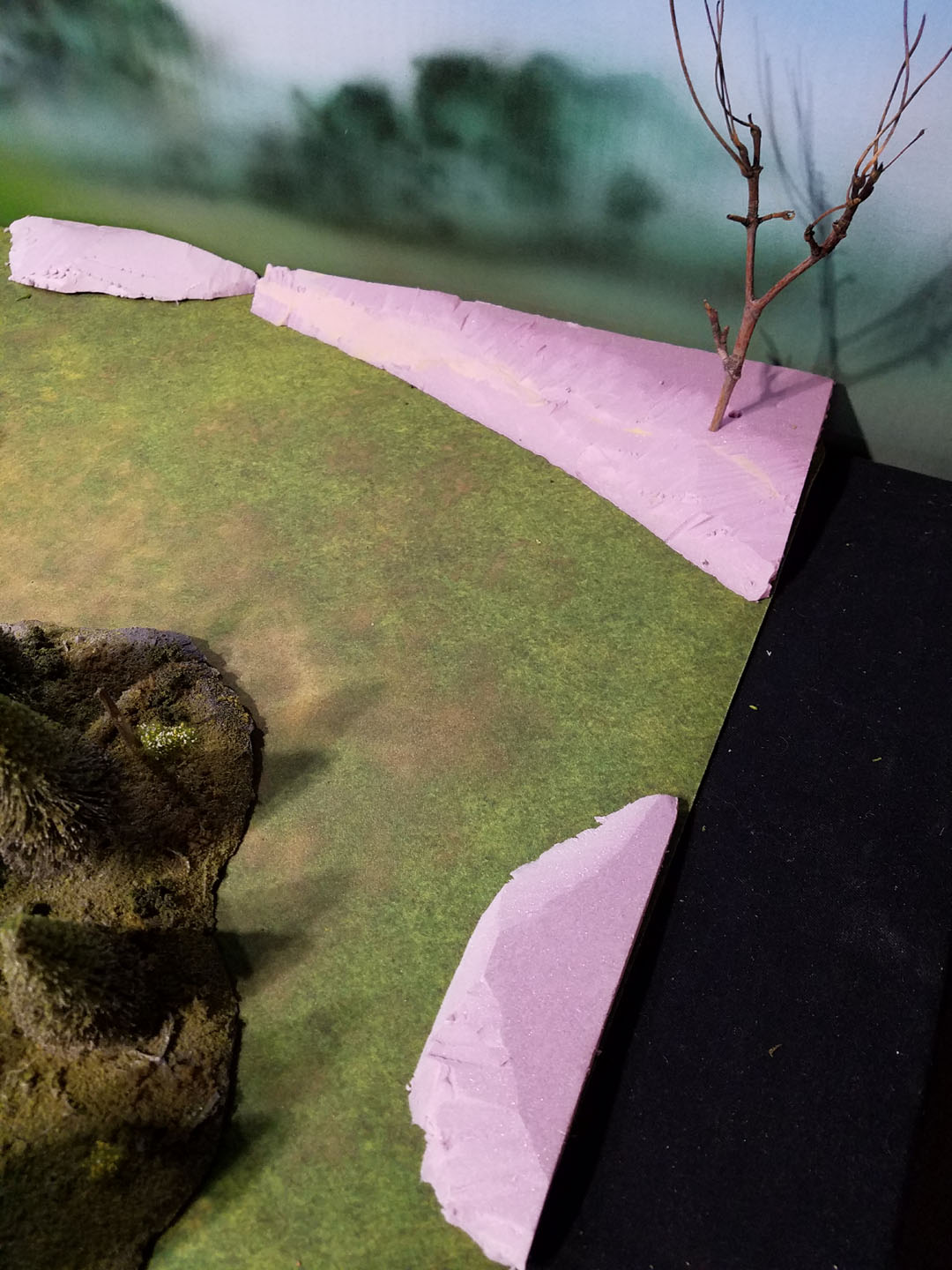 Even the flat sections of the backdrop could use some "forced perspective" as it is called.  In a way, I am forcing the viewer to see the backdrop as more distant by placing these small bits of terrain in front of it. 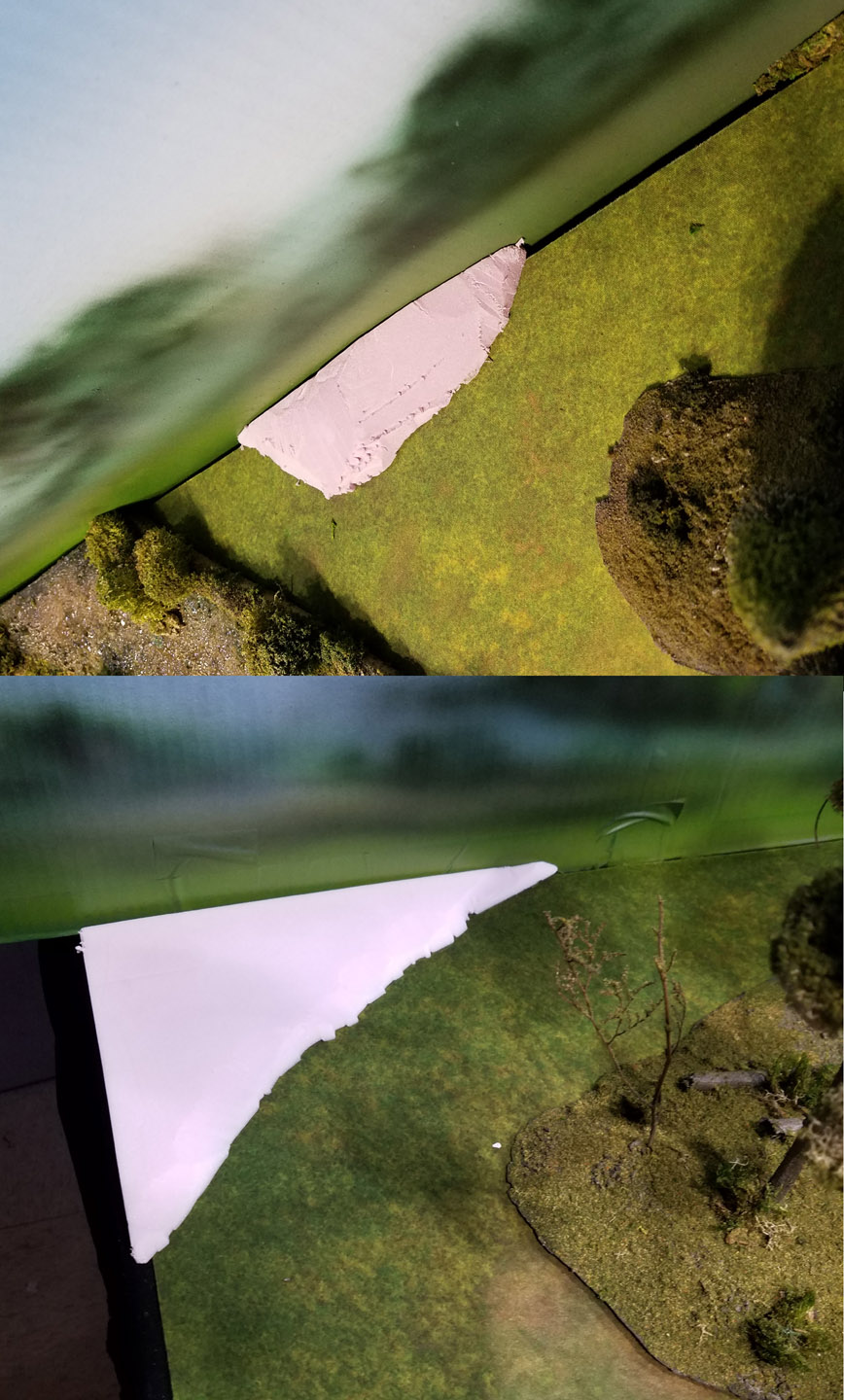 I made the trees in the usual fashion, which has been shown in many previous posts.  I sharpened the ends like a pencil, and stabbed that into the foam with some wood glue. 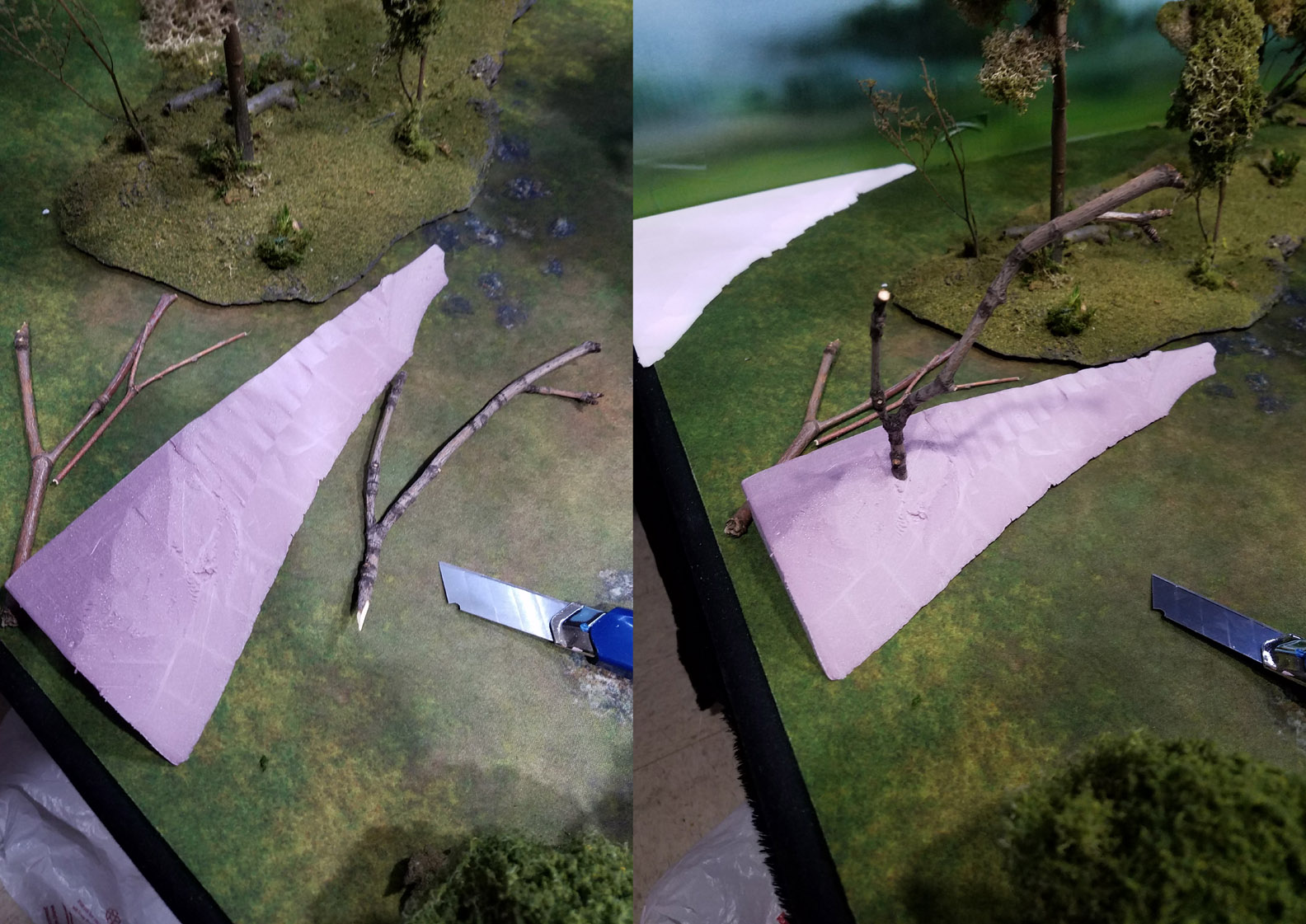 To create additional branches (and more support for the subsequent foliage) I used a bit of green stuff and some super glue to attach smaller branches to the main trunk. 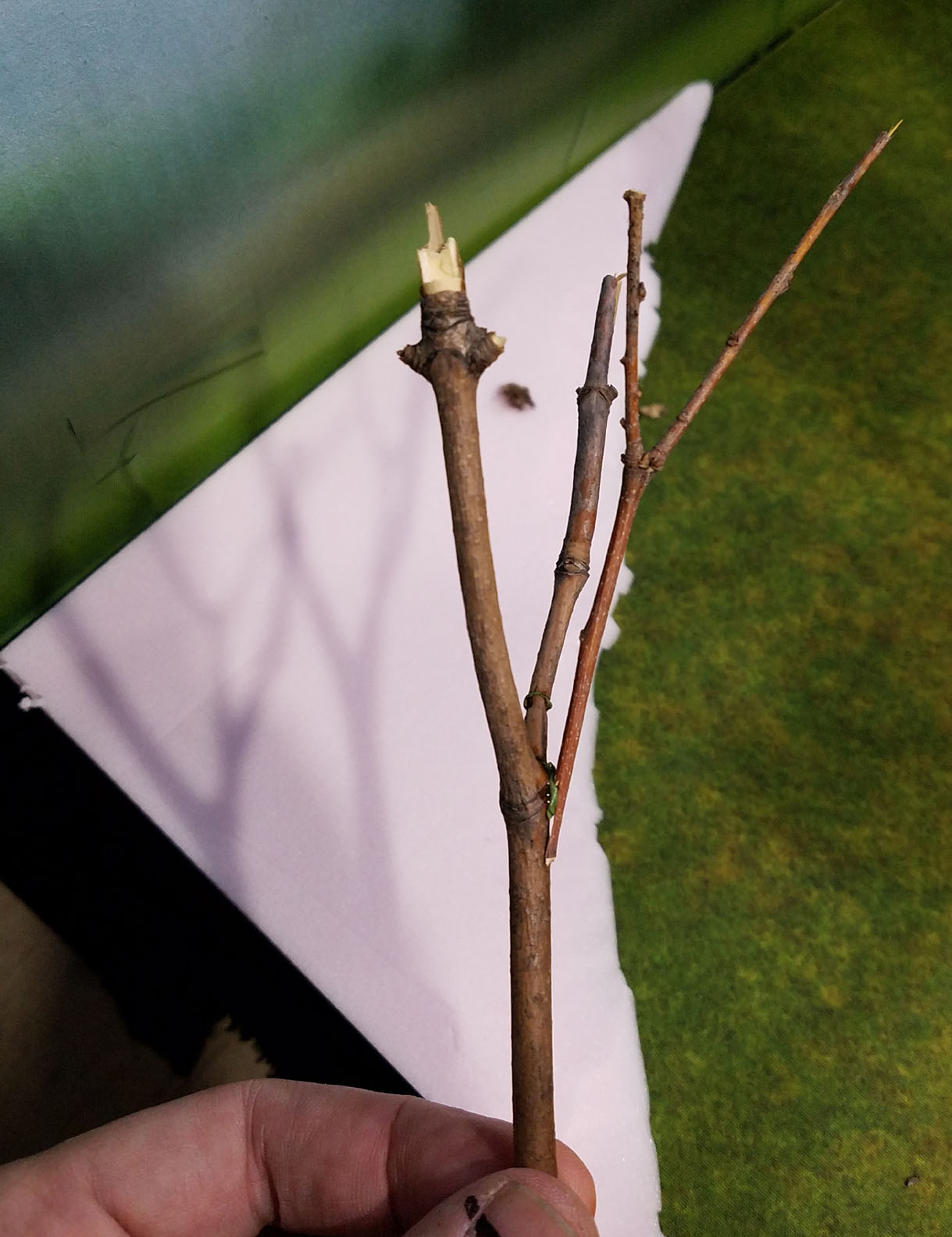 To make a wider piece that might be occupied by troops or a mortar, etc., I took two pieces of the thin pink underlayment foam and glued those together in a stair step. 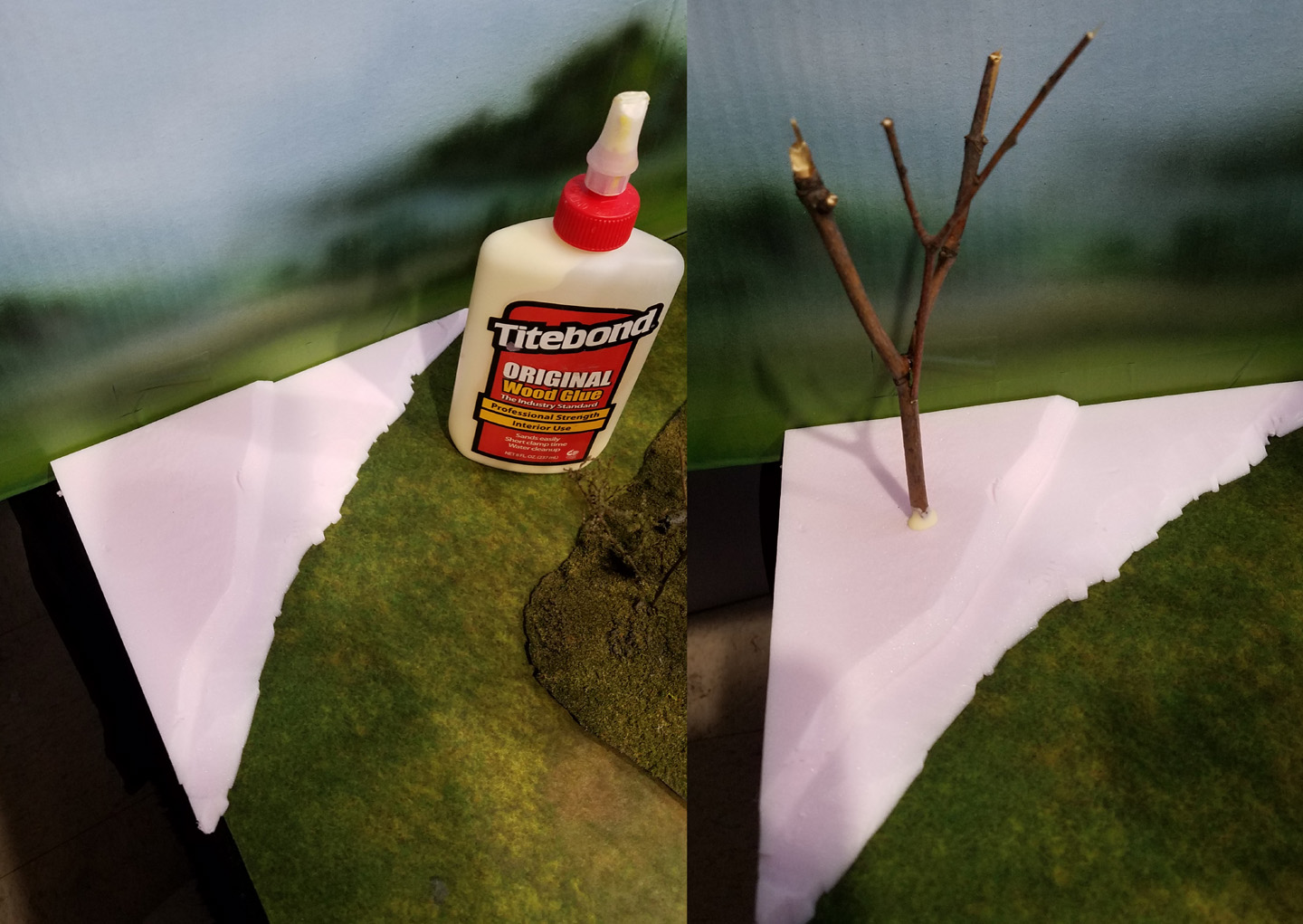 Here are are those sections with trees attached. 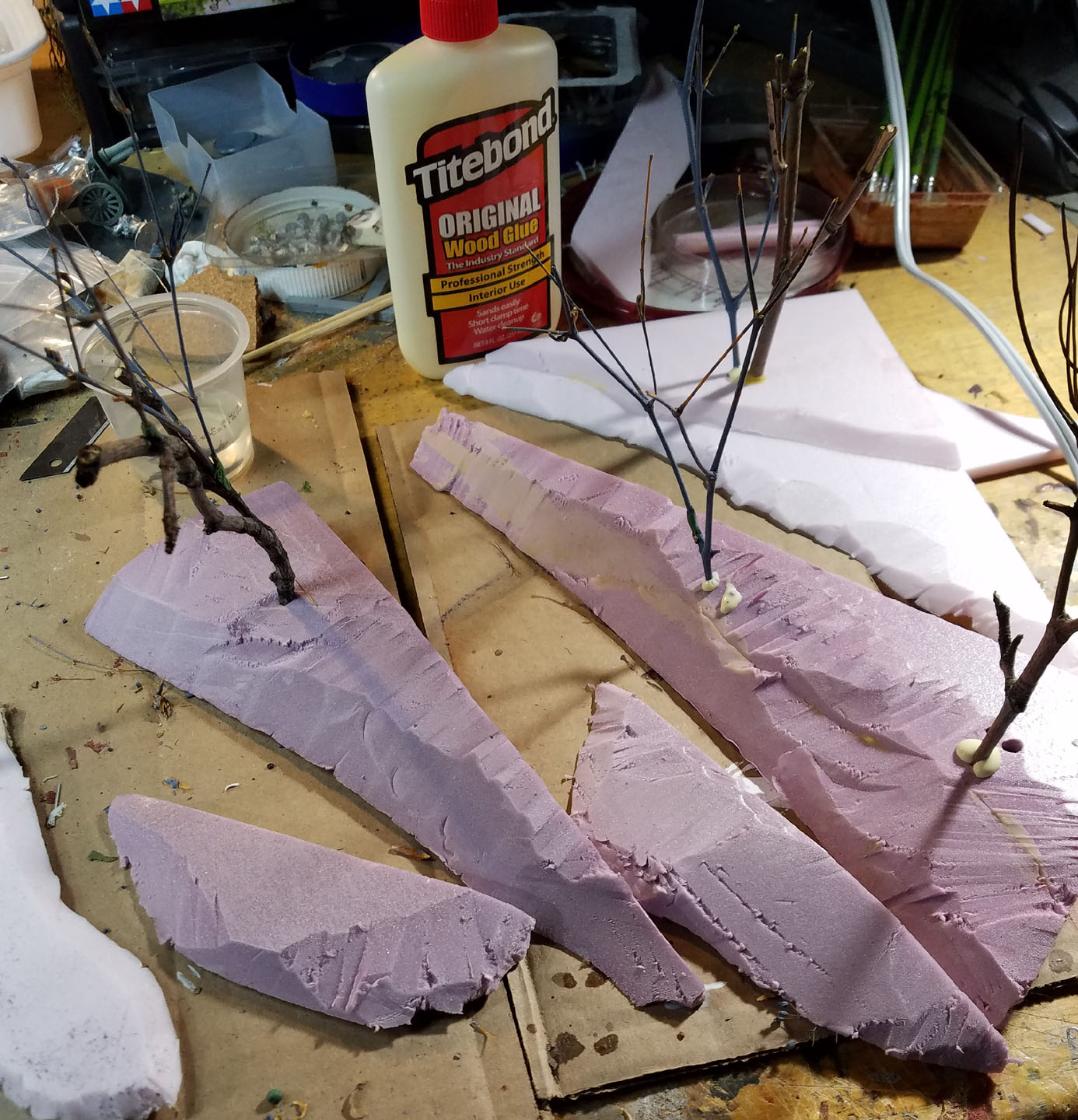 To give them a little more texture and strength, I have a few materials... wood glue, spackle, parsley flakes along with a sand/gravel mix. 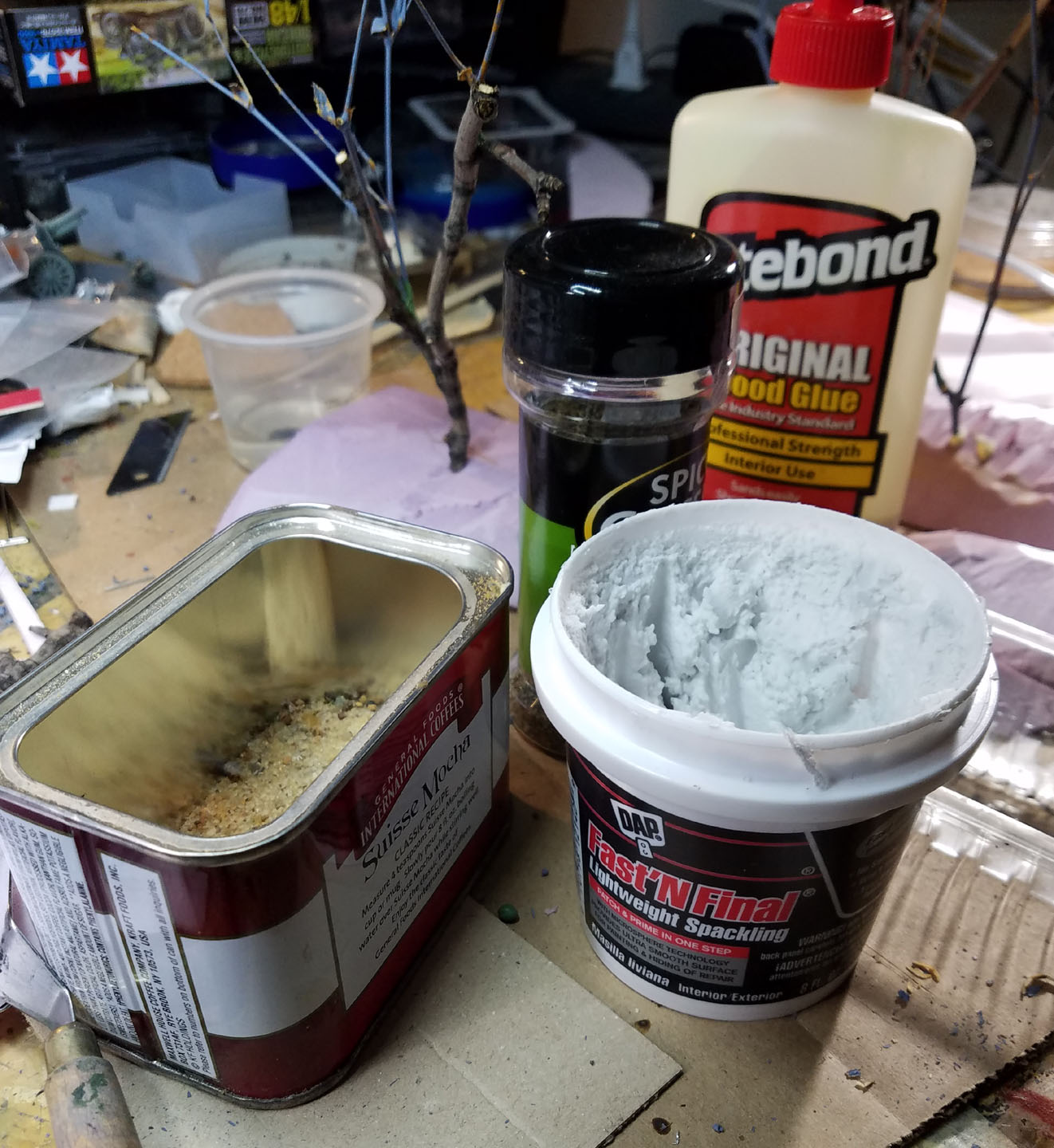 Wood glue is mixed into the spackle to give it more holding power on the pink foam and the gravel/leaf cover which will be added. 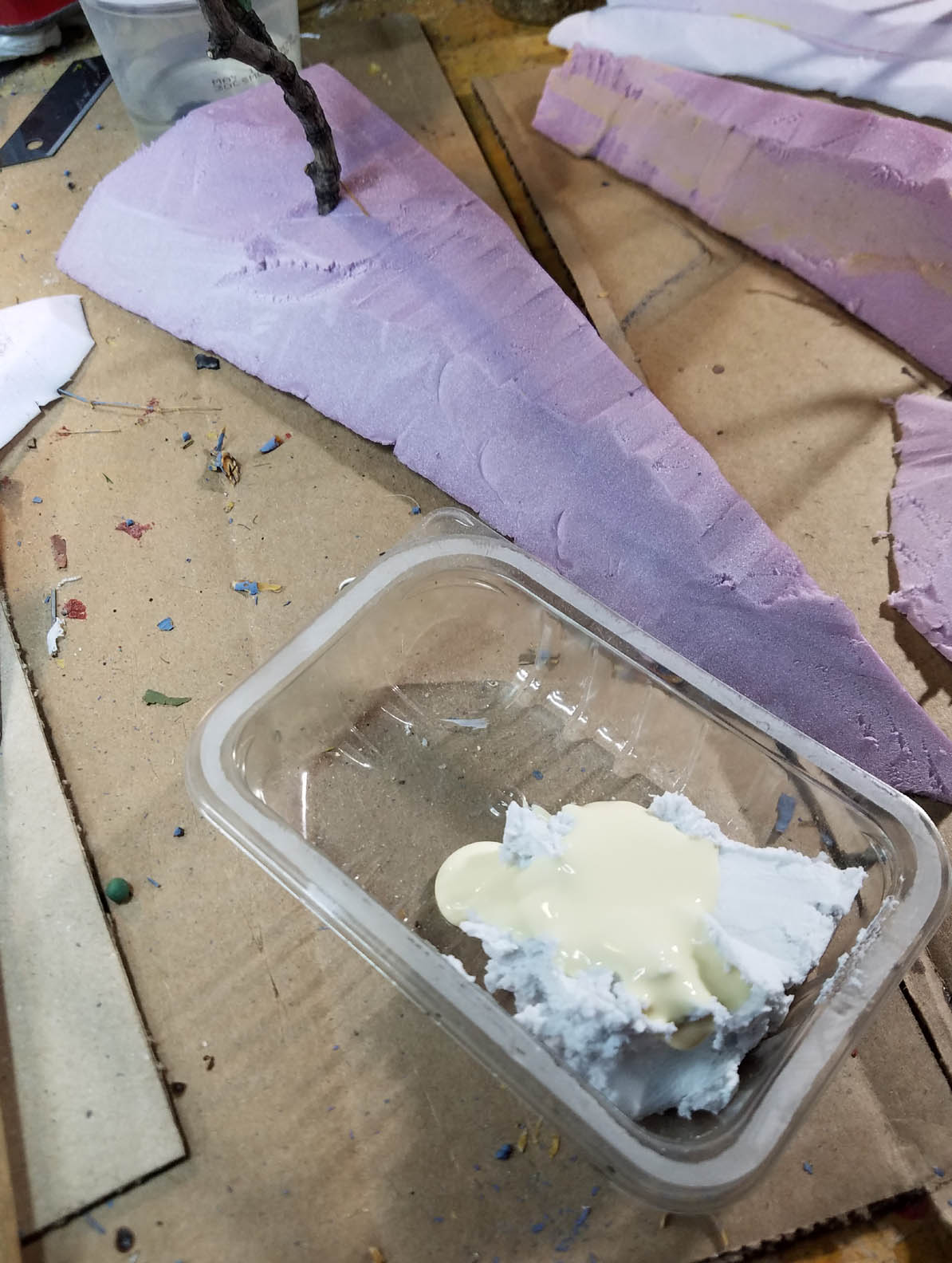 Once those are mixed together, I use a palette knife to spread it around the pink foam pieces. 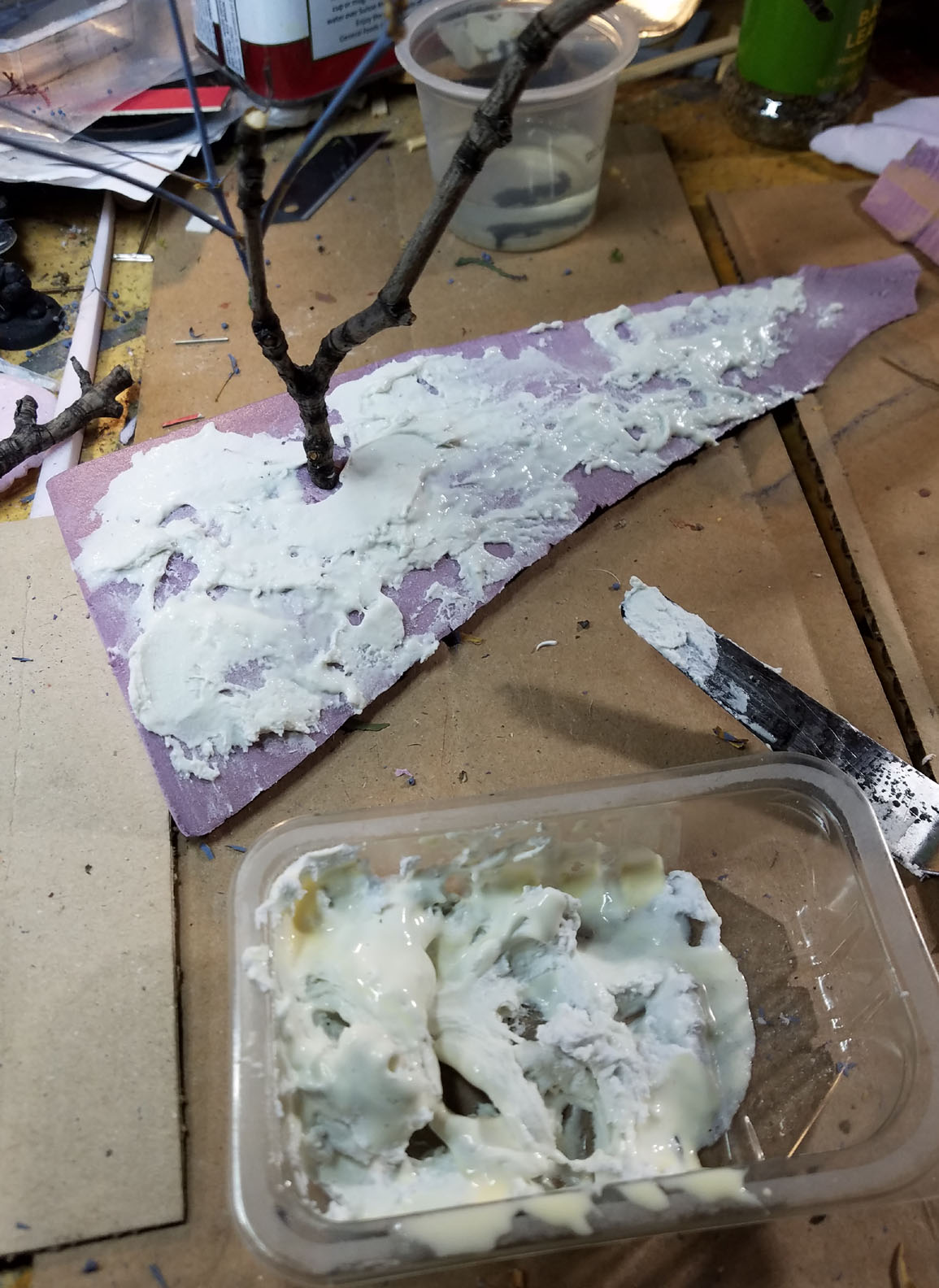 IN the image on the left, you can see what that look like when a larger brush dampened with water is brushed over the top.  It smooths it down a little, creating a gentle slope instead of a noticeable stair step.

While the glue/spackle is still dry, I scatter the parsley flakes along with the sand and gravel to get that ground texture. 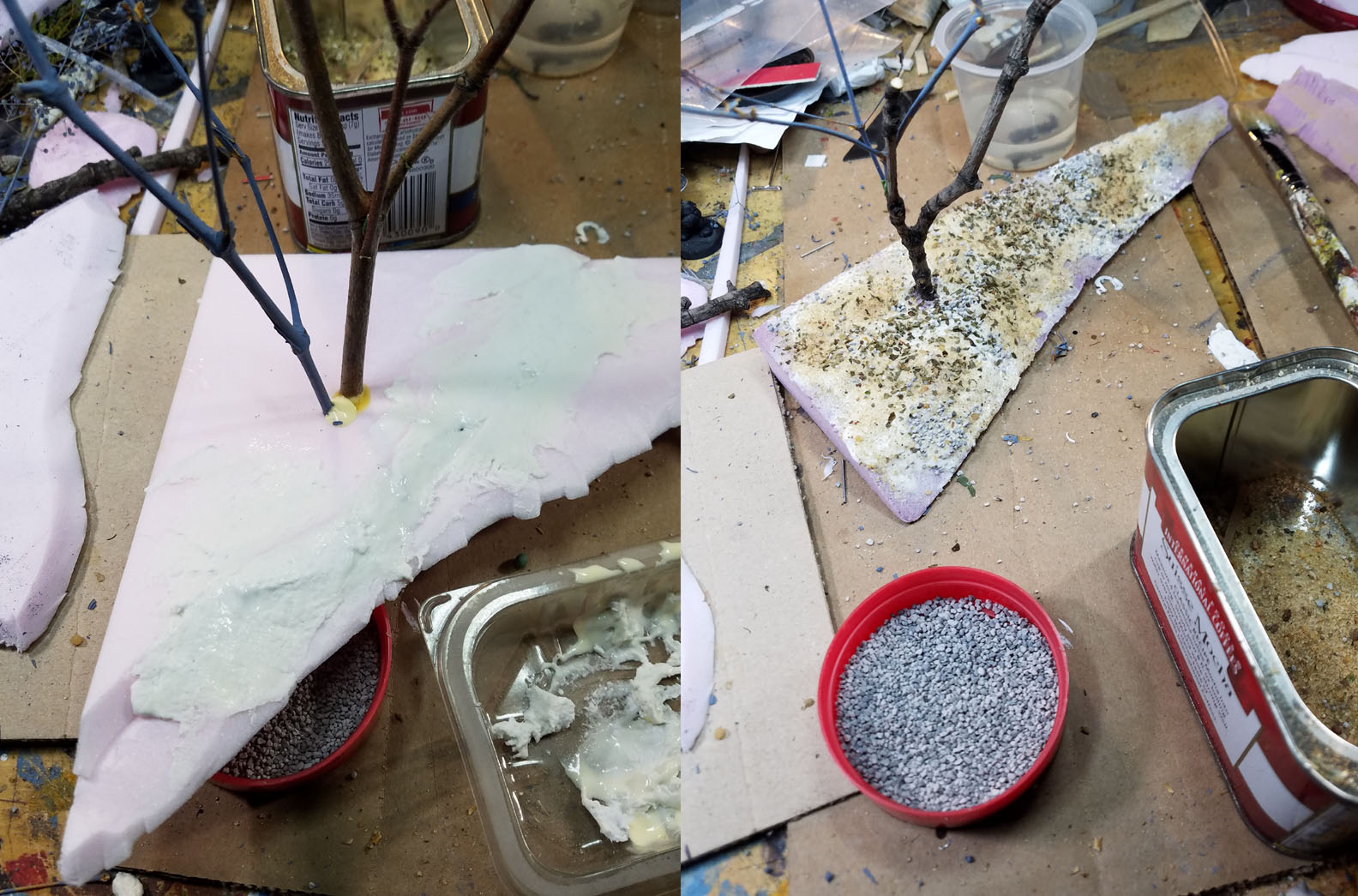 When that dries, it is very hard and solid.  I used the Badger Airbrush paints and the Stynlrez primers to get some brownish grey colors.  These were then covered with foliage, using the same techniques as the rest of the scatter terrain!

Stay tuned for the final post in the how to series showing all these elements together. Now I will finally be able to do those battle reports!

I am hoping to do lots of those, and any support that can be provided to the Patreon page will go a long way towards making those happen: 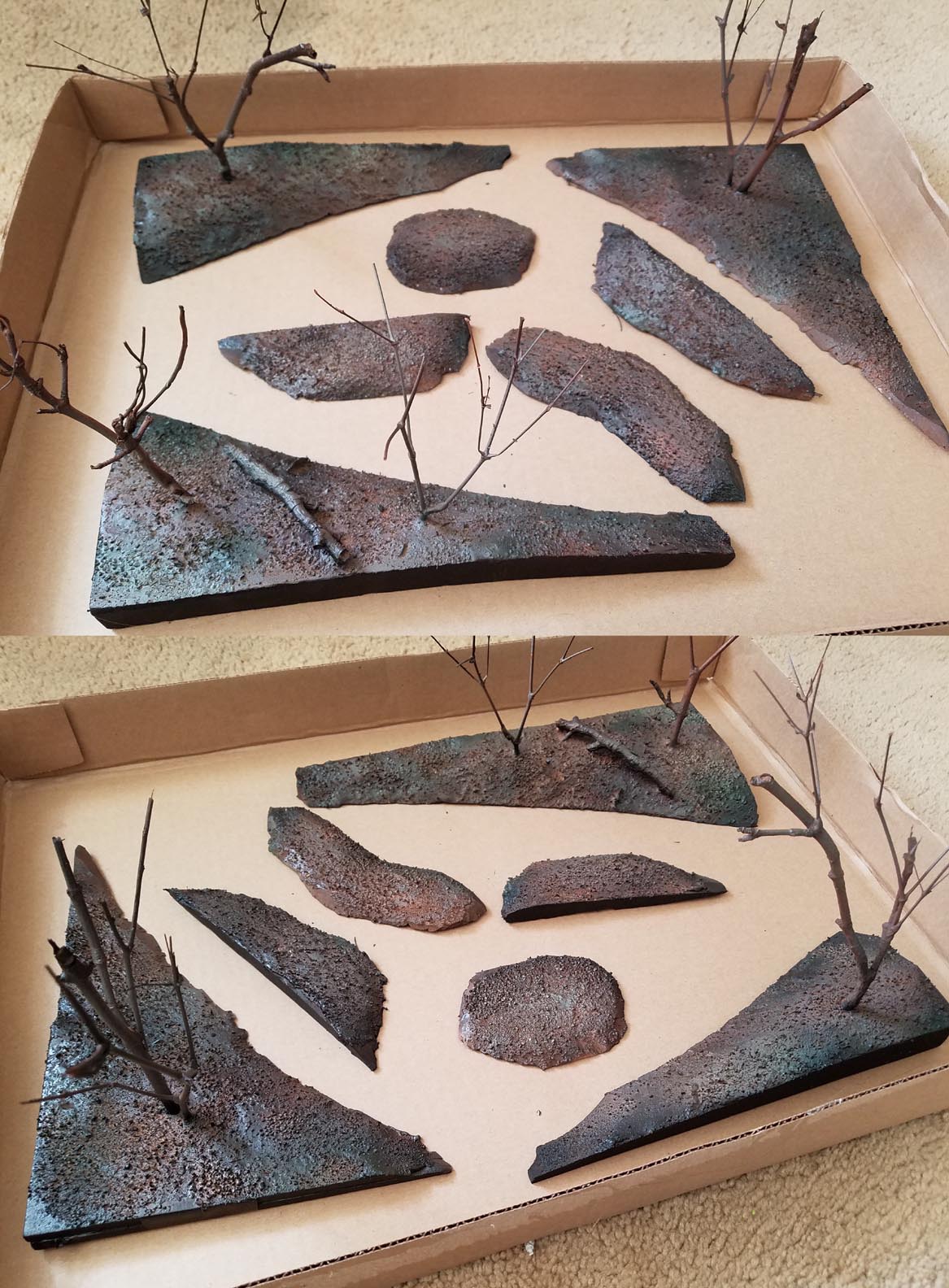