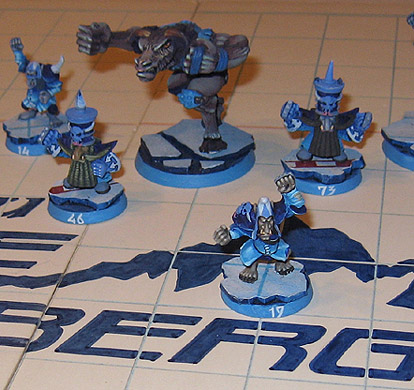 This was  project for a small blood bowl league that never quite got off the ground.

I had made the stadium many years ago.  There is a previous post with a few pictures of the Glacier Dome, and all the mischevious penguin fans inside.

This is more about the new miniatures I had been painting for the team.  The original Juneau Icebergs were a chaos dwarf team.  They were the very first minis I ever tried to paint back in 1995.

I was very interested in trying to reprise that old team, knowing what I know now!

The colors of the team are very similar, but I had learned so much since that first try!  Just the flesh tones alone were so different, as I did each figure with a different shade. 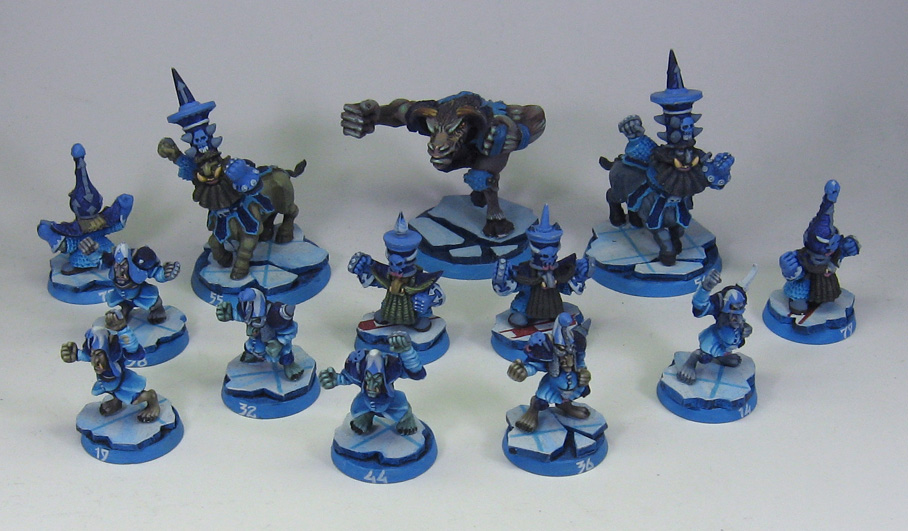 Also, the bases were a good deal fancier, using some baked sculpey to simulate the ice. 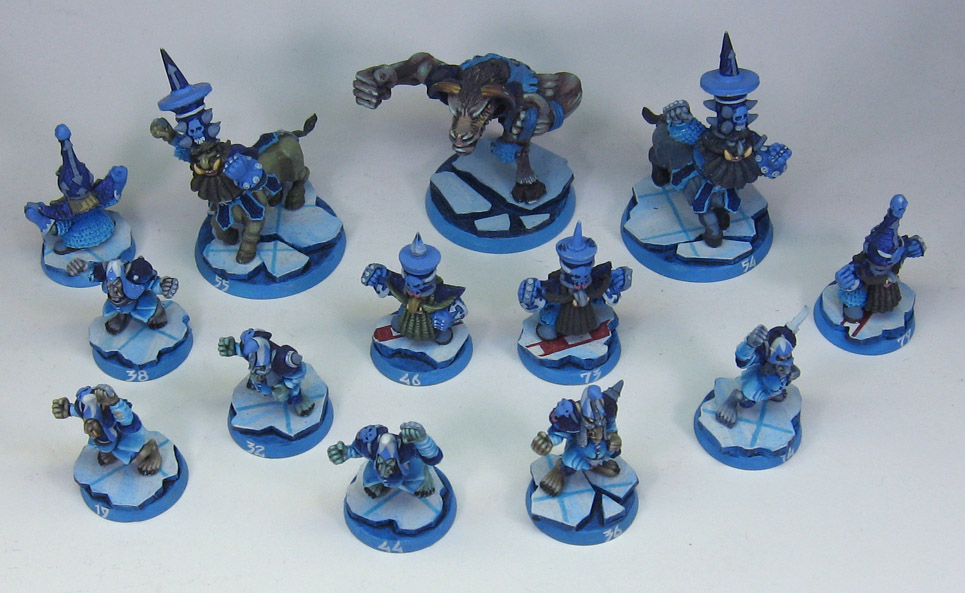 When I get a chance to continue working on this set of figures, I will be sure to make another blog post!

The bases themselves will be getting a heavy dose of gloss coat, similar to what I did on the Impact Hockey players a while back. 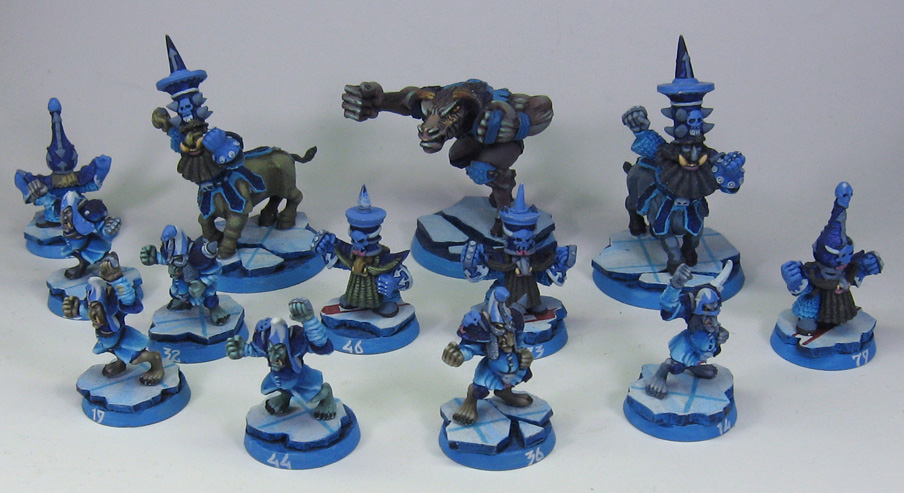 I also have a coach figure riding on a polar bear that is hilarious!  You're going to like that one. :-) 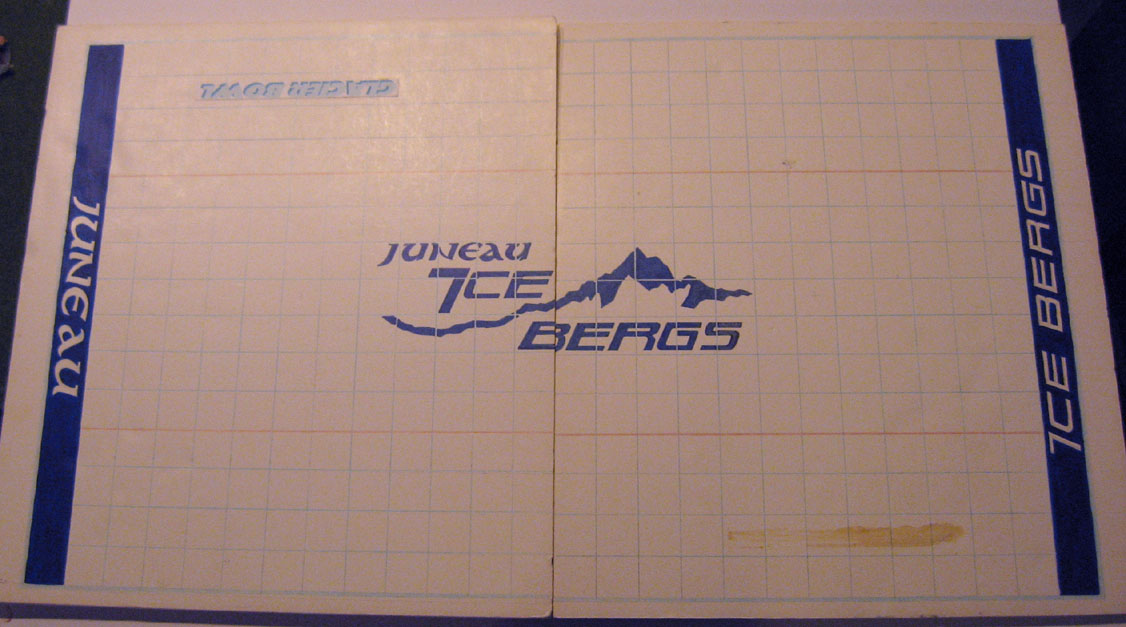 Here's the team out on the field.

As always, I love making logos, and this was very fun! 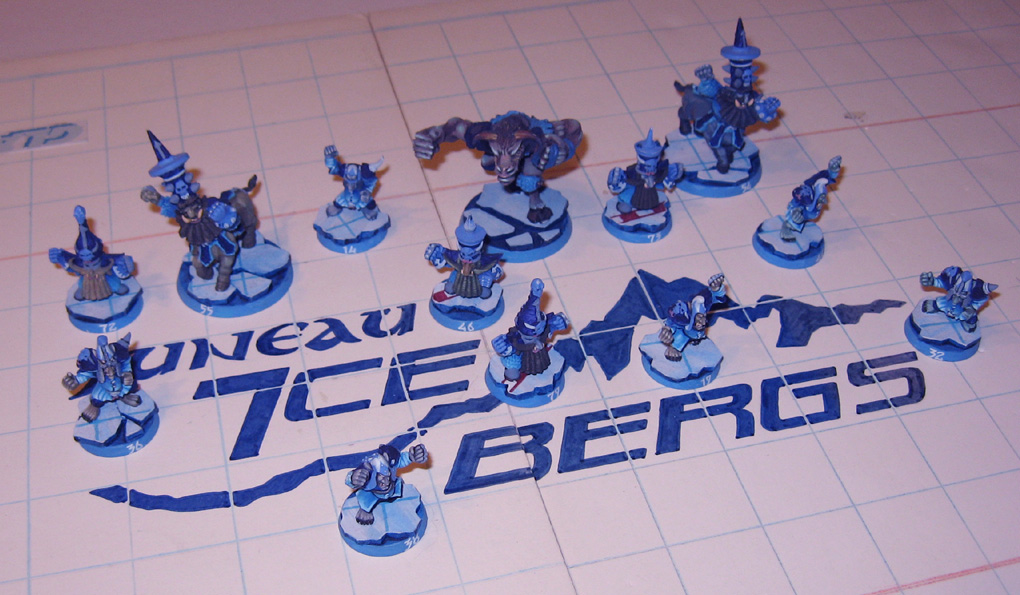 It's too bad the league did not take off, since these lads were off to a great start... 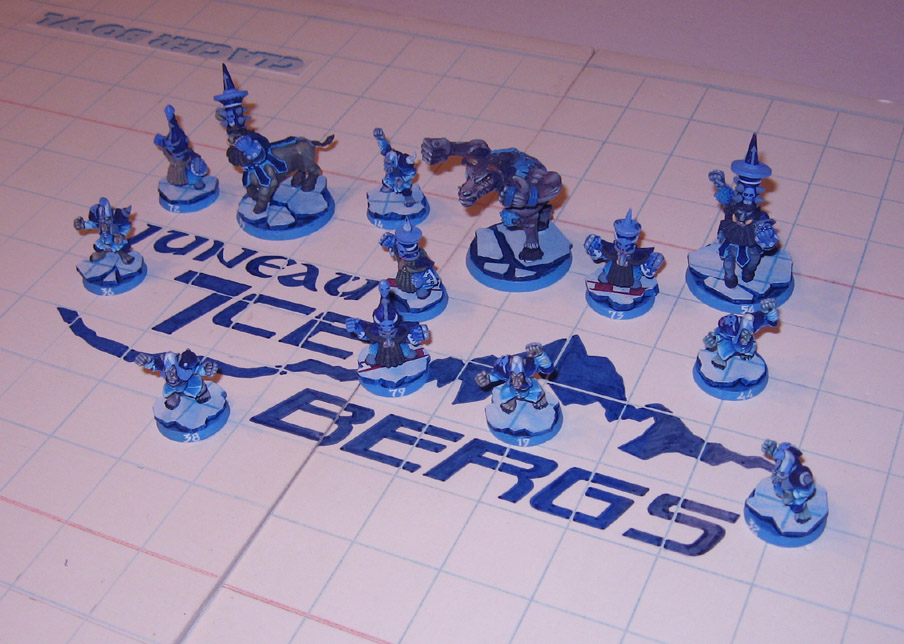 First step on the road to Adepticon! The color test finished. 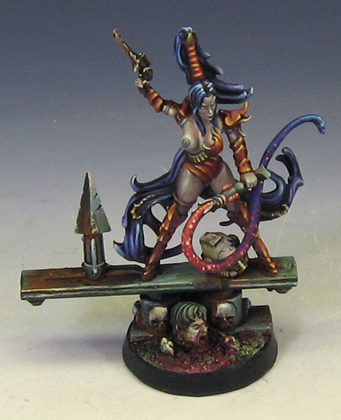 Here she is!  It was a bit of a relief to finally have paint on an Adepticon miniature! :-)

I have been assembling, basing and generally prepping the whole army for well over a year.  It felt good to have something that was not grey or white or black or some shade of unfinishedness... 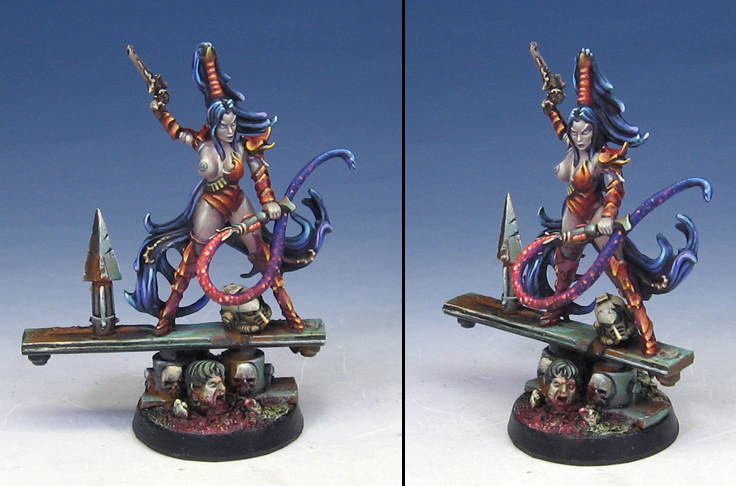 At this point, I think I will work on one or two more figures from this unit before I move on to the vehicles or even the jetbikes. 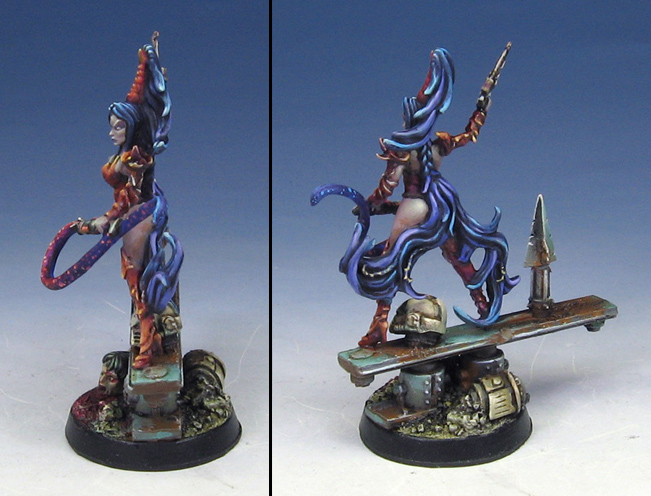 I hope that you will enjoy seeing this army progress the same way the Tomb Kings did!  Eventually there will even be a display board!  Looking forward to that! 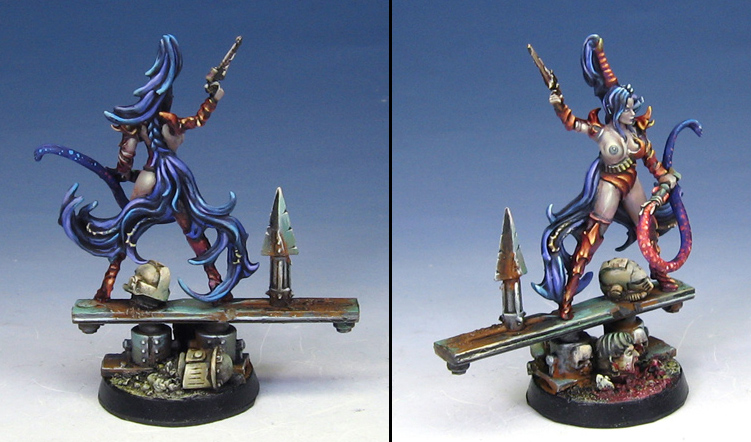 The next figure in line is another Raging Heroes sci-fi Vestal, this time with a shardnet and impaler.  That proved really handy in that test game that Rich and I did.  It helped the tiny squad survive long enough for the Incubi to join in! 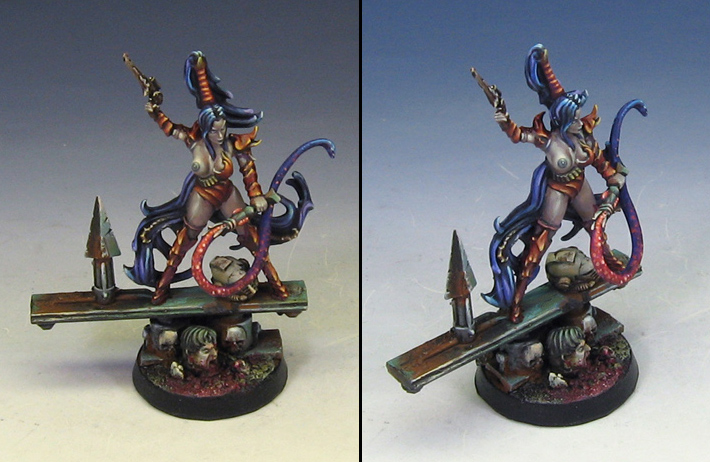 Finishing the color test figure for the Dark Eldar 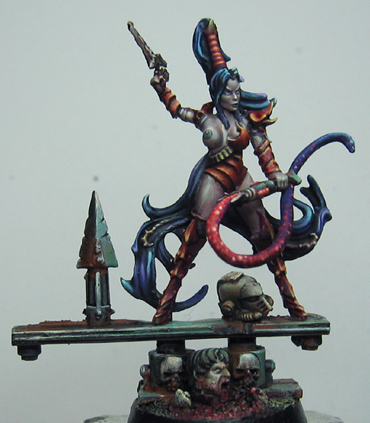 Here we have the conclusion of the first Raging Heroes Sci-Fi Vestal.  It is also my first color test miniature for my Adepticon tournament army!

When I last left you, I had everything just about set up for the glazing and tinting stage.  My first step was to take some Druichii violet and Drakenhoff Nightshade and do a series of glazes on the hair and the whip.  The idea was to use the colors I had already painted as a 'backdrop', so that this new transparent layer would tint  colors that were extremely blue towards a purple shade.  This would make it clash less with the red armor. 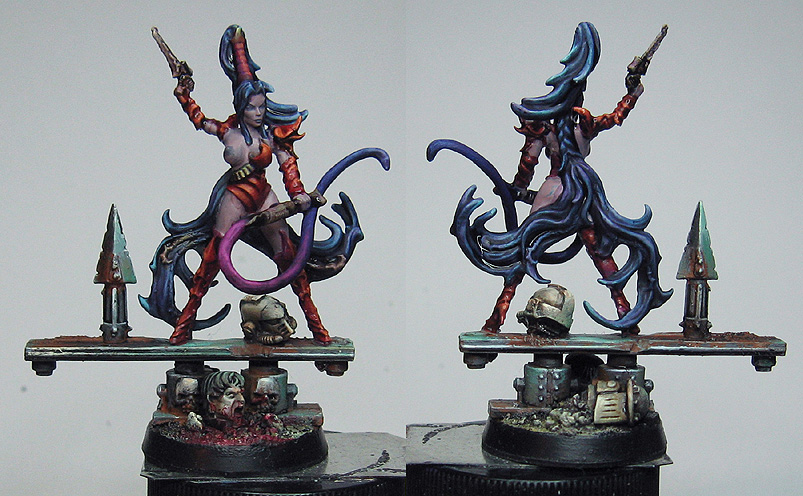 The whip also got the same treatment, for the same reason.  That is the whole point behind starting out with brighter than needed colors.

Also at this time, I mixed some sepia with the violet glaze and hit the armor.  The flesh tone was shaded darker by using flow improver to thin down a pinkish/grey mix.  I put that color into the recesses. 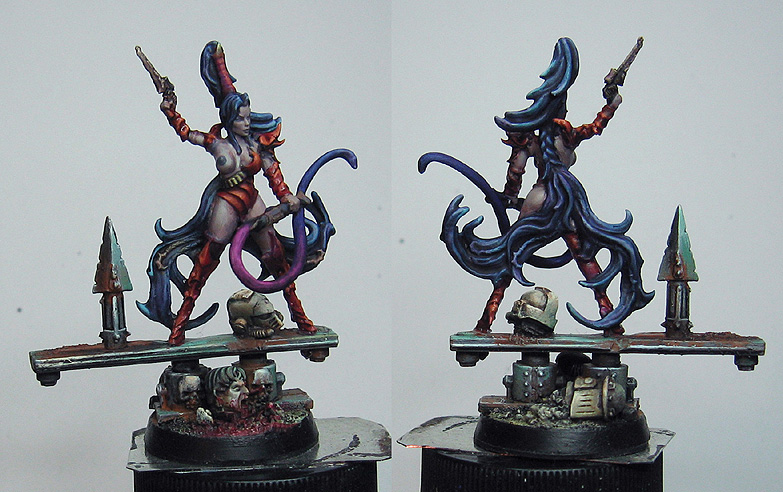 I did a second and third round of glazes to establish the darkest darks.  Once that was done, it was time to work back into the middle tones.  The darkest shades had also been completed on the flesh... 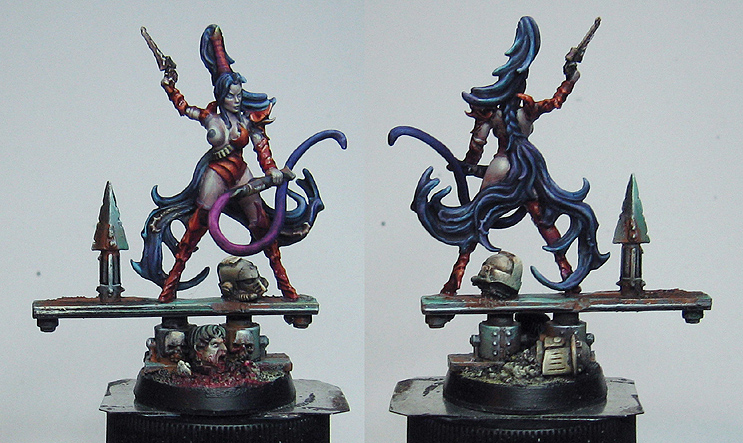 The flesh tones are lightened in the same way as the fantasy Vestal from earlier in the week, using a Vallejo pale green.  I mixed a warm red color to work into the armor.  The hair got some lighter colors as well, with the idea that some parts of the highlights would be more purple/pink, and others more sky blue. 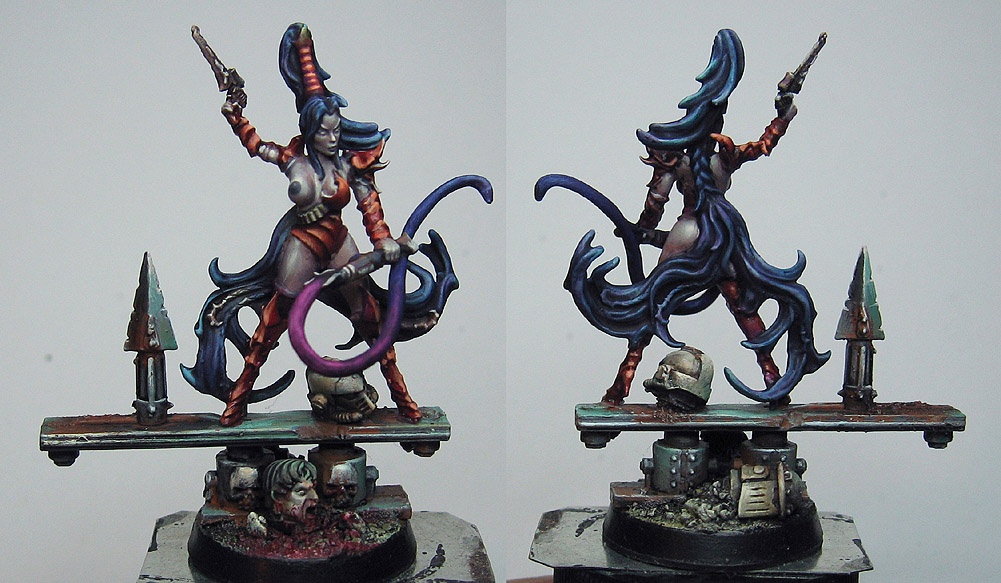 The flesh tone gets more highlights, and I start to work on the agonizer.  I thought it would be fun to have various colors of lighter dots which would be a contrasting color towards the end of the whip. 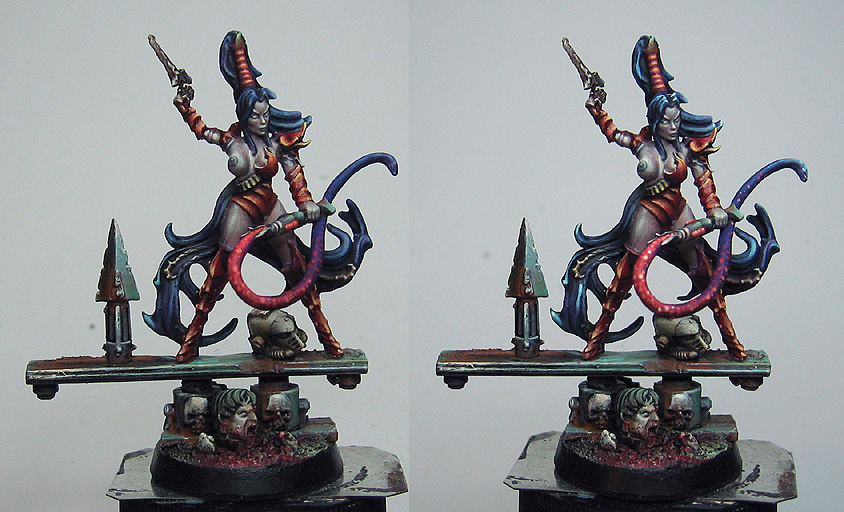 Here's an image that shows the pinkish highlights on the hair next to the sky blue highlights. 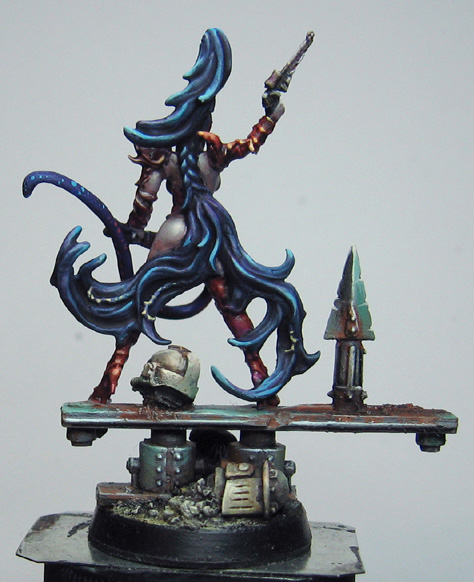 Final highlights are done on the flesh, hair, pistol and armor.

Color test pieces like this are very challenging.  I ended up switching colors mid stream several times, which is why I could not be more exact in my description of what colors I was using!  As I was painting this, I had to keep in mind how the Venom was going to be painted, and what colors I would use.

Add to that the notion of painting figures you had not painted before, and it makes things pretty interesting :-) 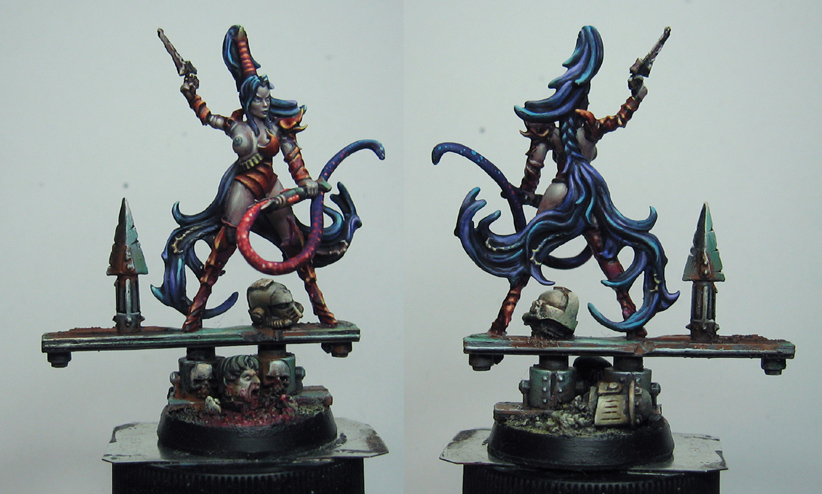 I will post shots of the finished figure tomorrow!


Posted by wappellious at 2:16 AM No comments: