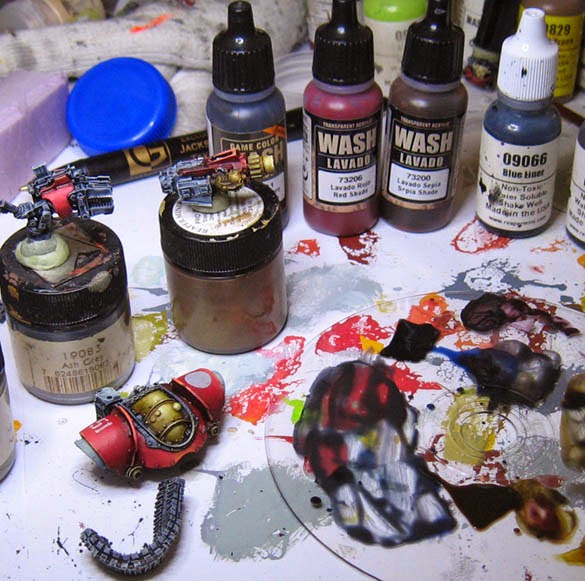 OK, some WIP images of the Mechanicum Castellax.  I showed you the shaded basecoat images a few days ago... now for some glazing!

There's a variety of materials out on the palette (or dvd stack protector in this case!), including Vallejo and Reaper.  The Reaper liner paints are the high pigment, yet very thin paints which are fantastic for creating great dark shades. 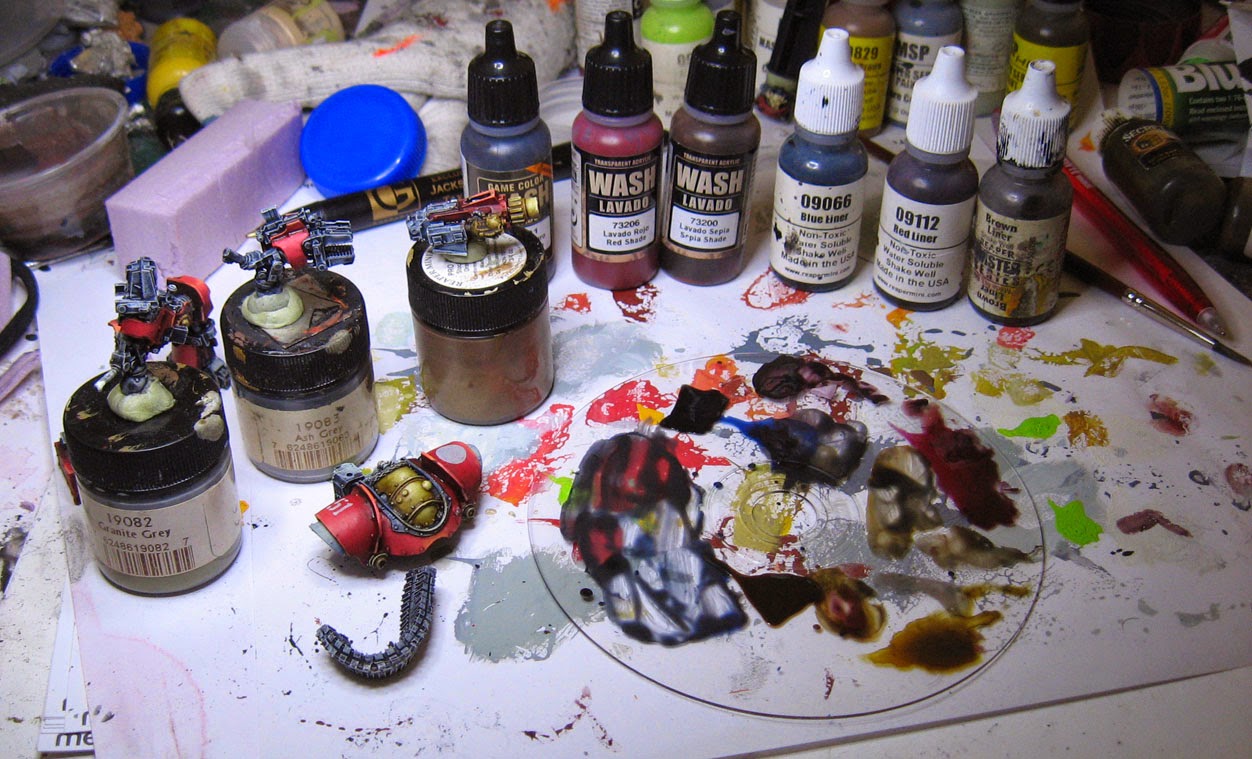 The glazes on the metal parts focused mostly on the blue/black mix, but I also tried to work in some browns and more neutral black/gray.

This was done to compliment the much warmer reds and golds of the armor plates. 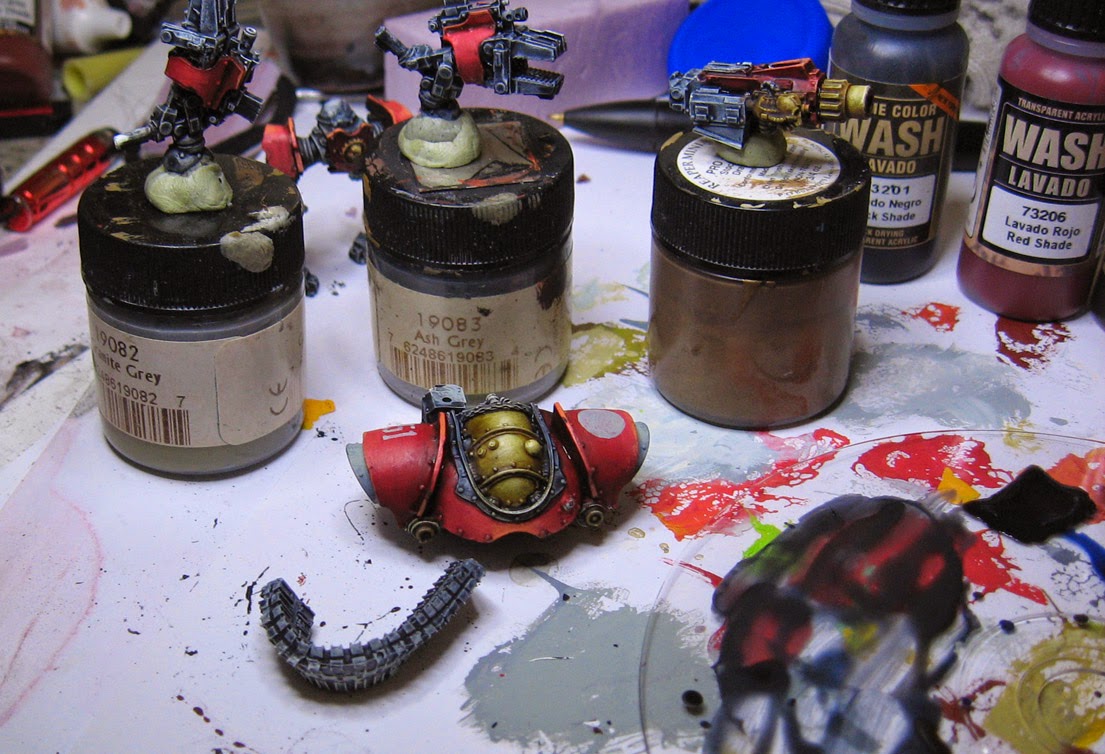 Keep in mind that once this is complete, I will go back in and add even more color variety in the midtones and lights. 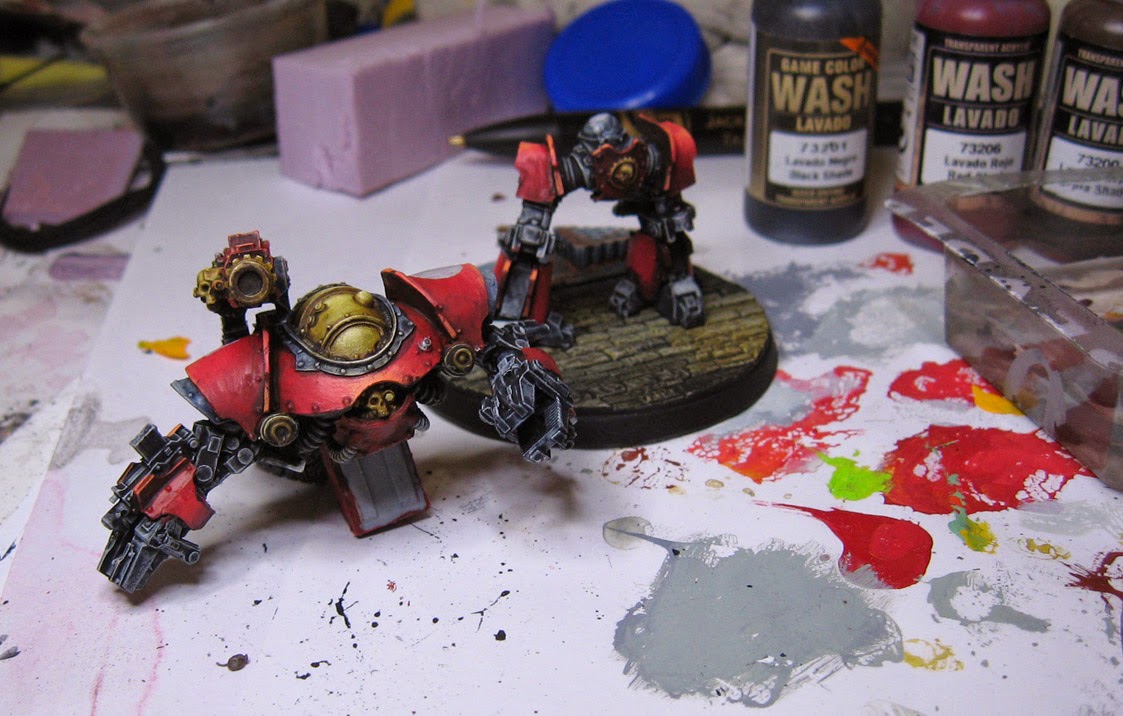 The goal here is to set the deepest dark shades, and plan out where the brightest highlights will eventually be.  Also, I will think about where I will shift the midtones more purple, green, and so on. 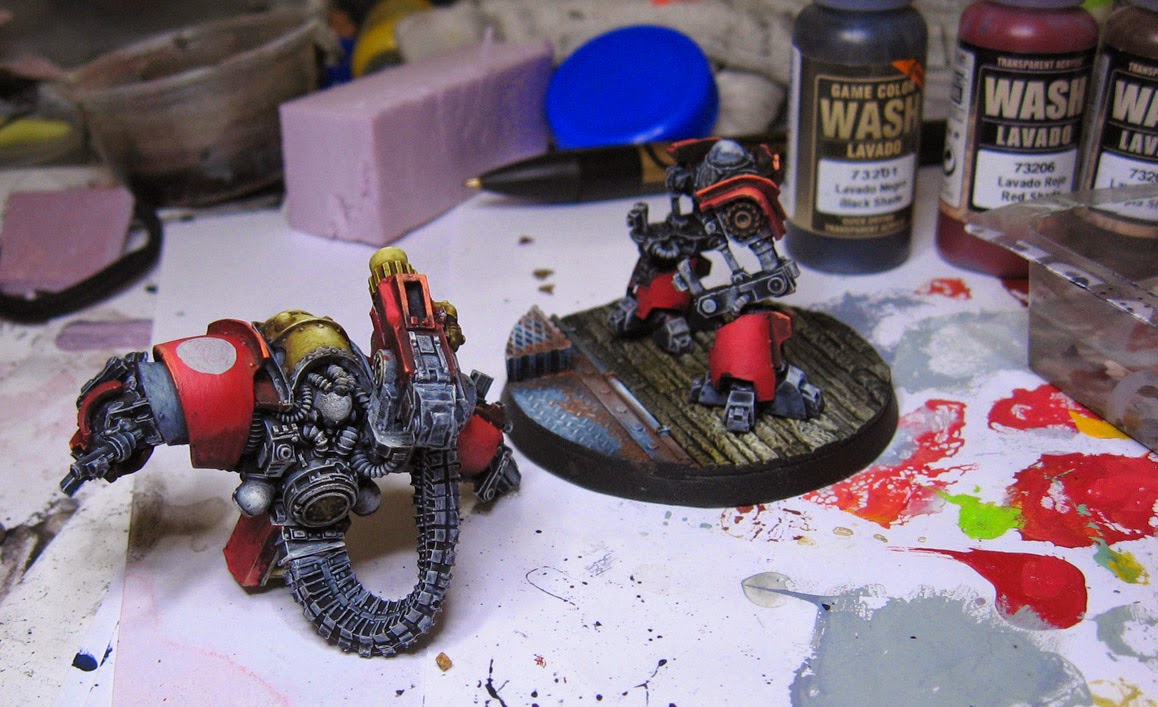 I decided to make the ball on the back of the torso be glowing in order to get more interest back there.  I didn't want to rely on weathering alone to break up all that similar color.

The darks, highlights and glowing effect are mostly settled at this point.

I continue to refine the midtones.  By shifting the color on each surface, the metals look less boring, and they also have a bit more shape.

More details are added, including some Mechanicum icons and paint chipping.  Stay tuned for more!! 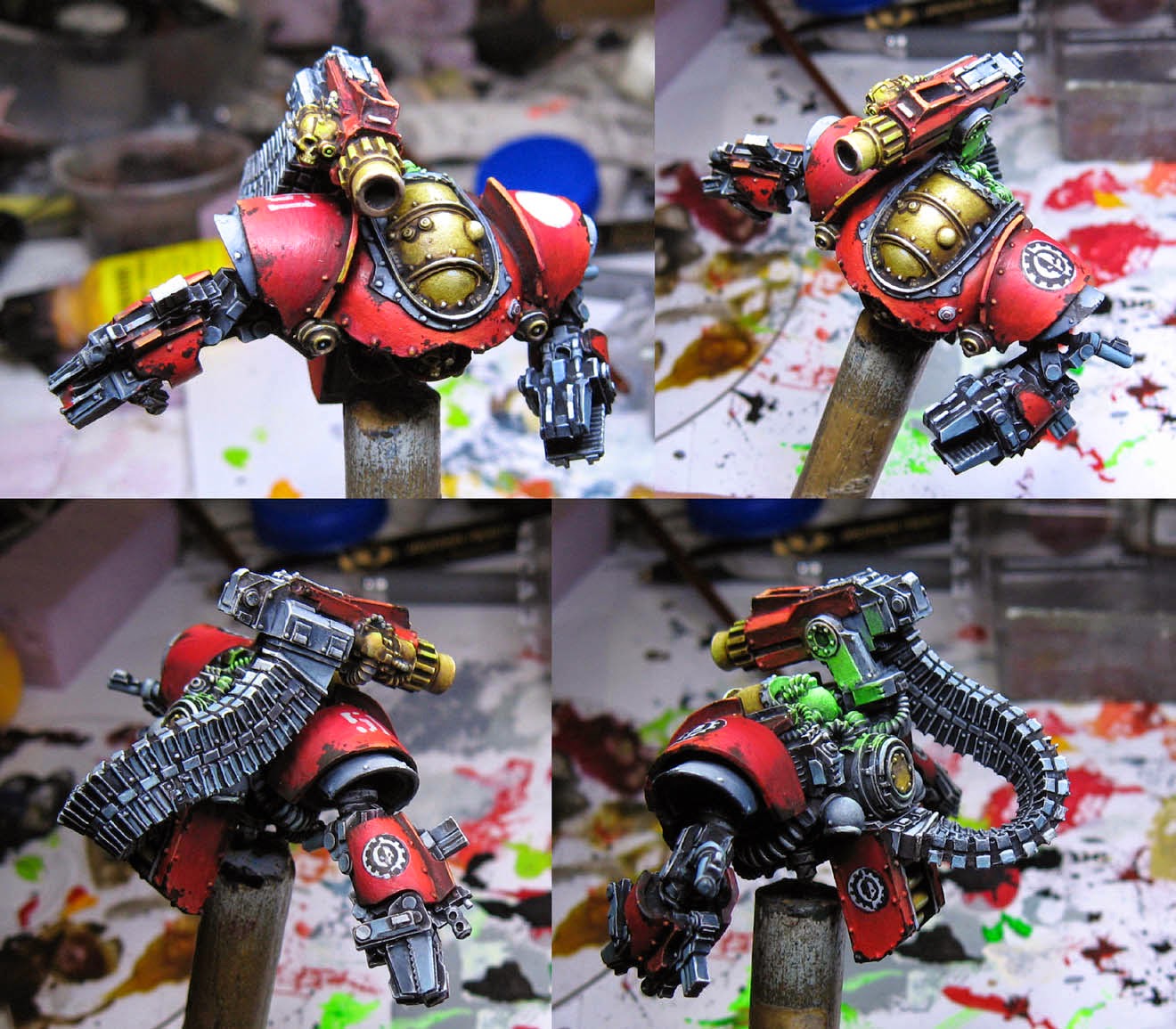 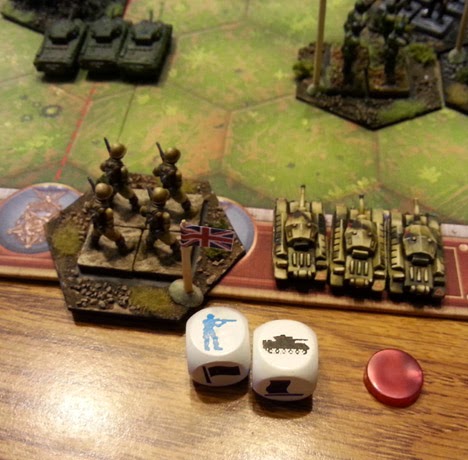 More from the campaign.  Canadians and Brits vs the Axis, now pushing them out of Caen, and on the run!

Here we see the tally sheet, showing the victory in the first battle, and also the 'pre-battle' record keeping.  That is, the reserve rolls and the all important Victory Event Rolls.

Those really let you do a number on your opponent before the fight even begins.  You can weaken units, and even take away vital command cards!! 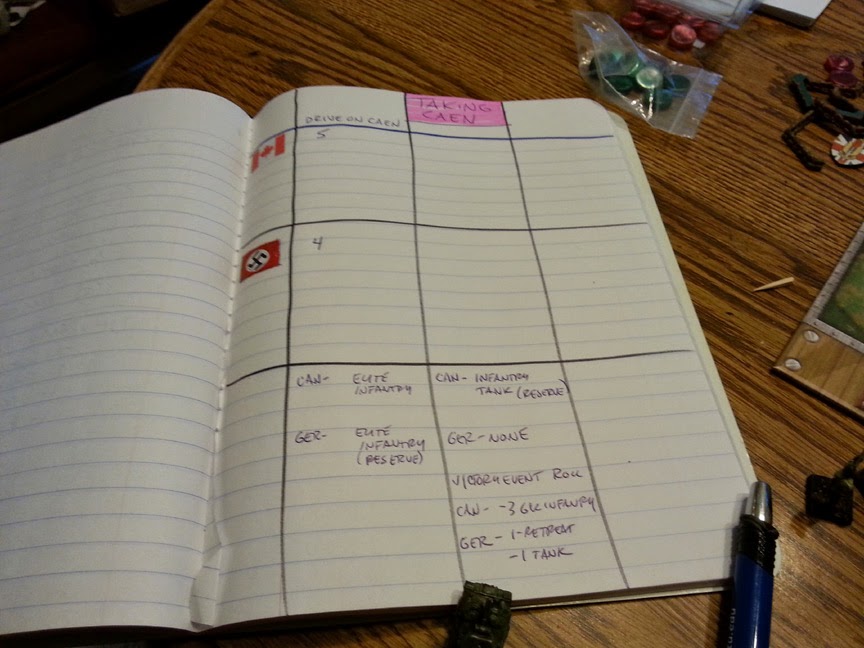 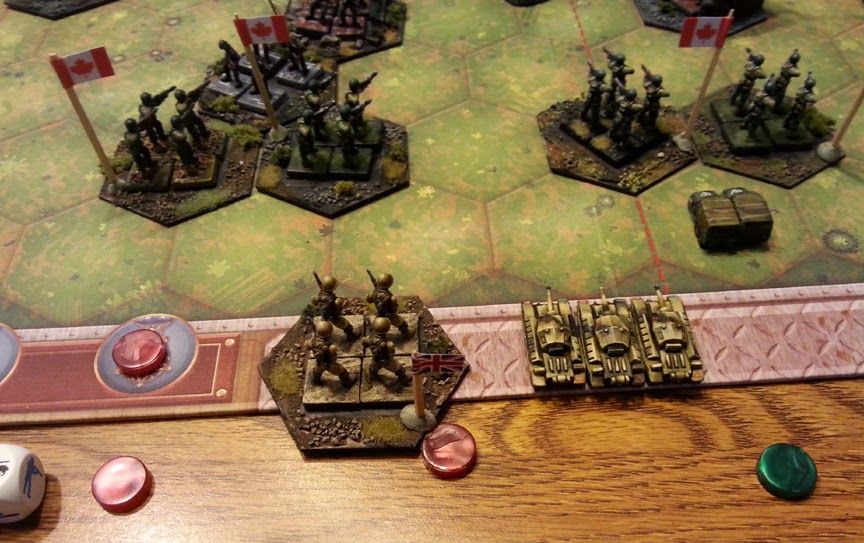 But once again, it will be the Canadians that bear the brunt of the fight. 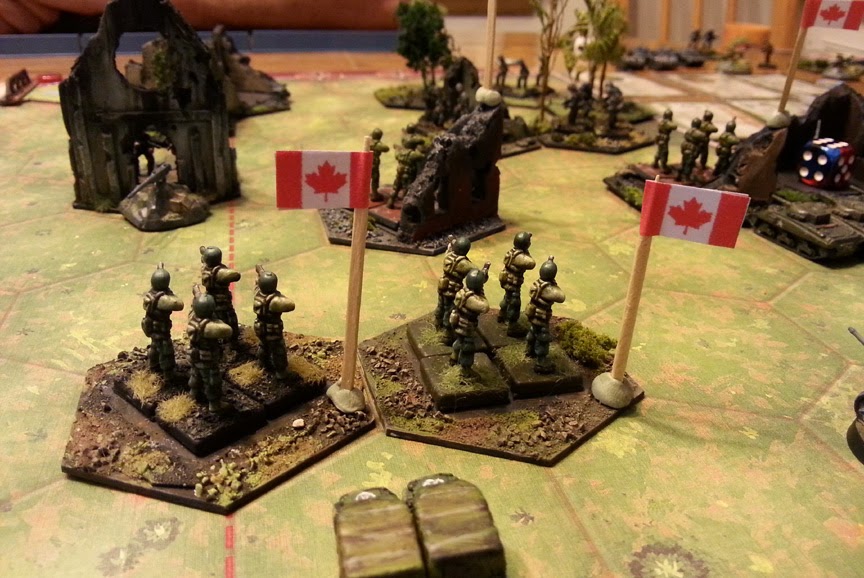 This unit of armor was a victim of the Victory Event Roll... 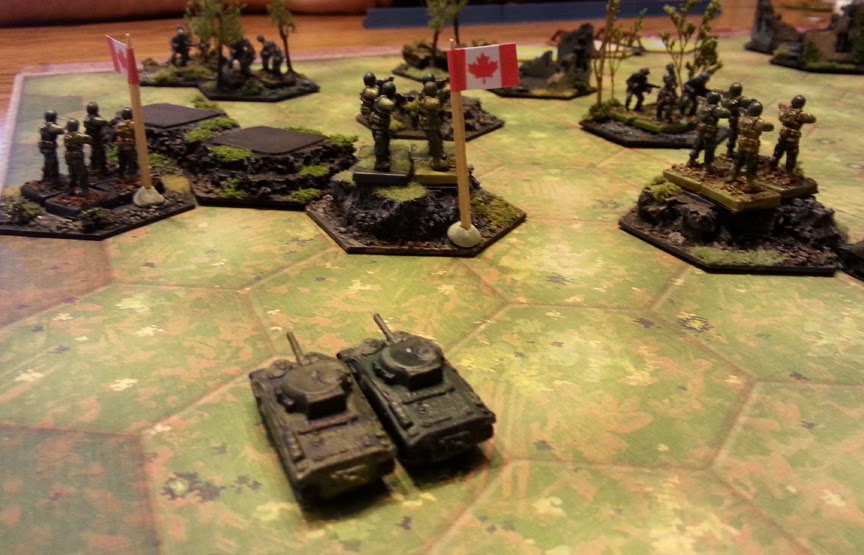 Lots of infantry on the left waiting to chase down the retreating Germans! 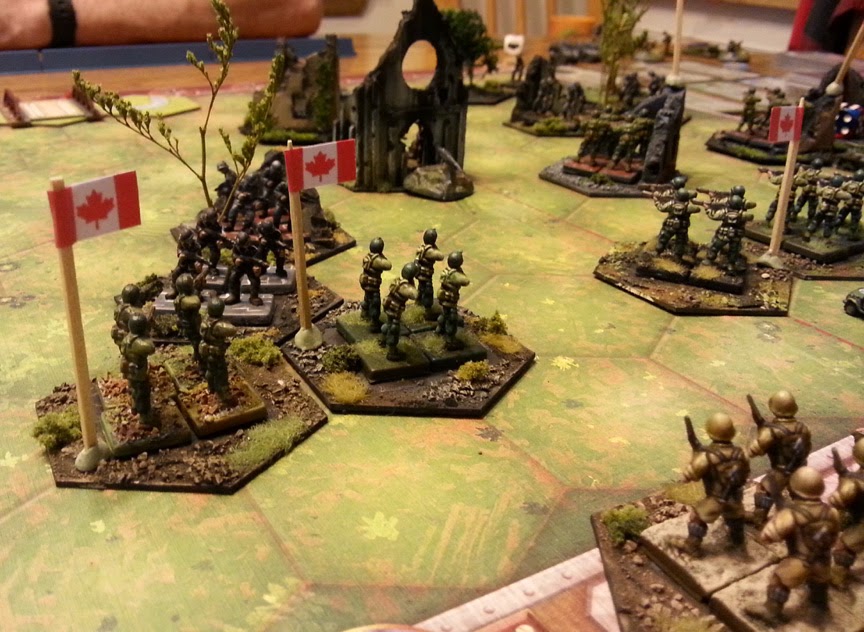 The Allies begin by hammering the forward units that are fighting a desperate rear guard action.

Also, nightfall is approaching, and if they can delay the bulk of the Allied forces long enough, they can slip away under the cover of darkness. 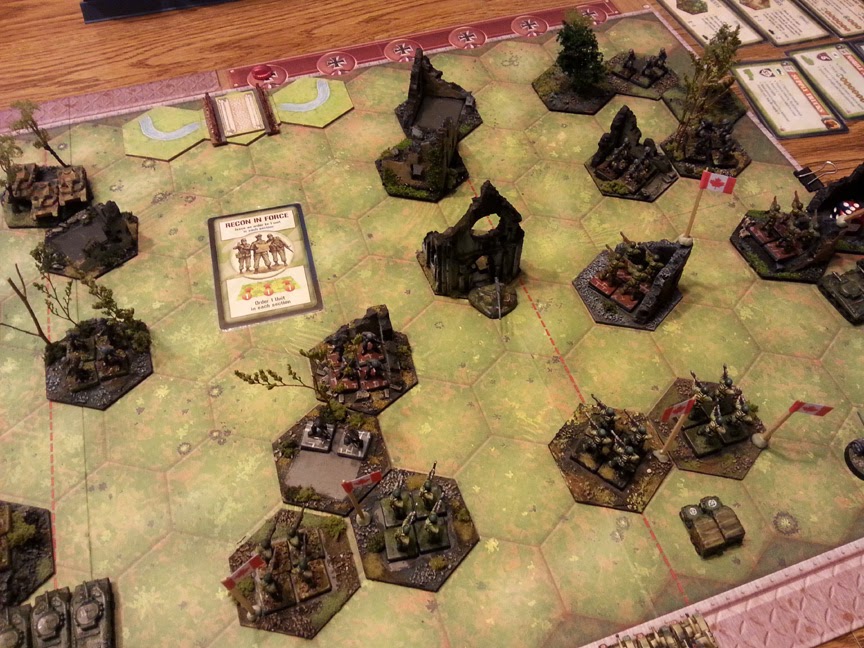 However, the Germans begin to evacuate those units, as it is even later in the day than both sides thought! 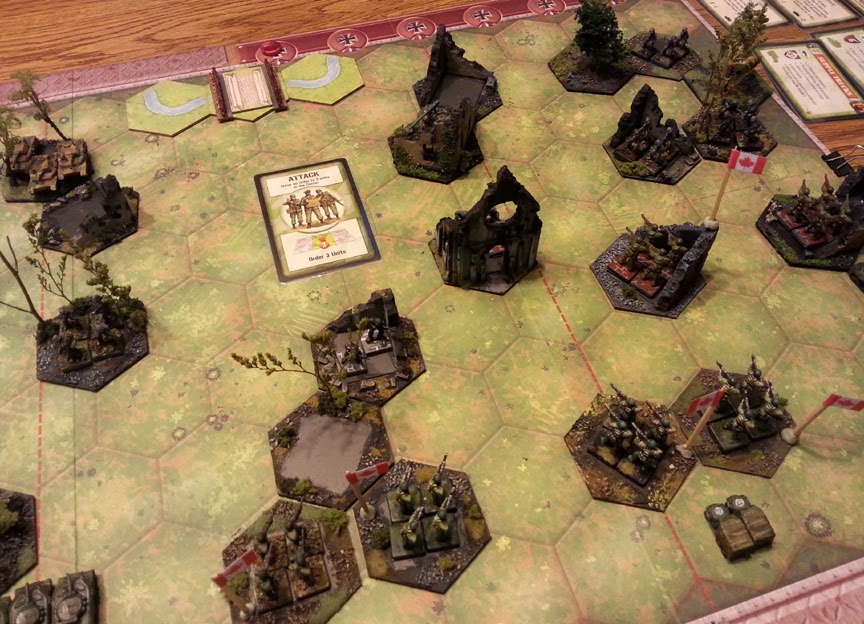 The fierce Canadians surge forward, rolling into the town to cut off the retreating enemy! 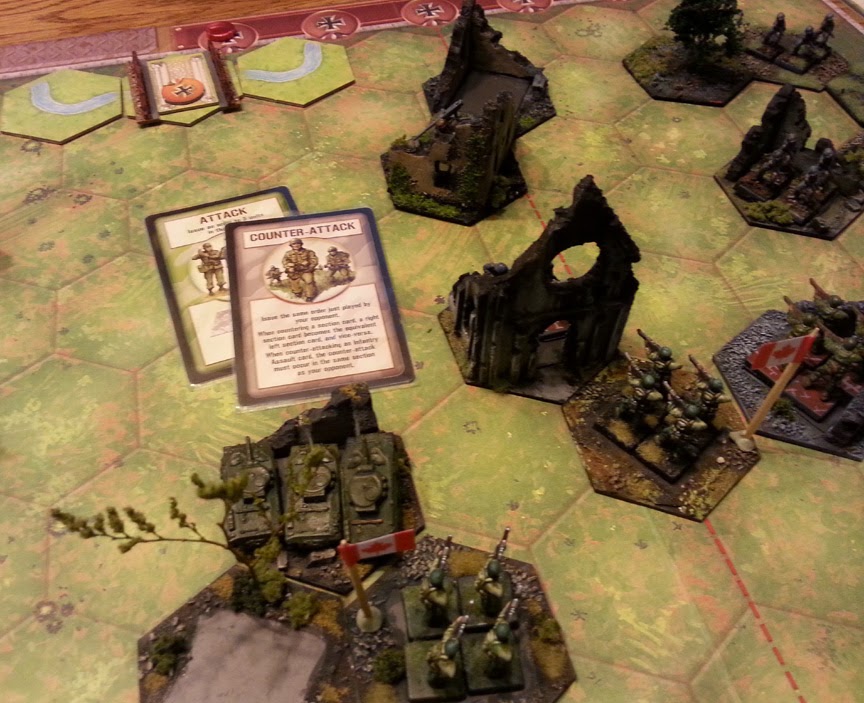 A dreaded Panzer unit drives out into the open to cover the infantry unit heading towards the bridge... and safety. 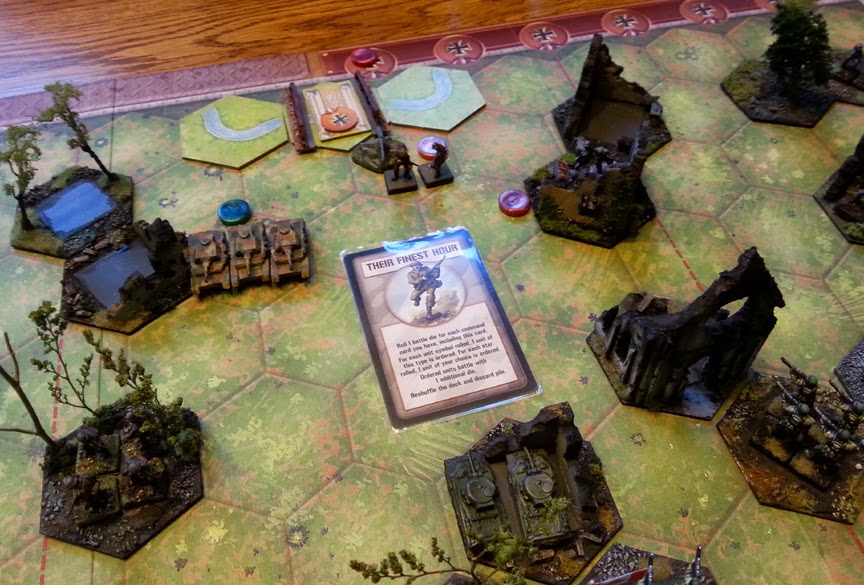 The Allies find other enemy units hiding out in the woods, and try to trap them there.  The artillery is no longer viable, since darkness now obscures these units! 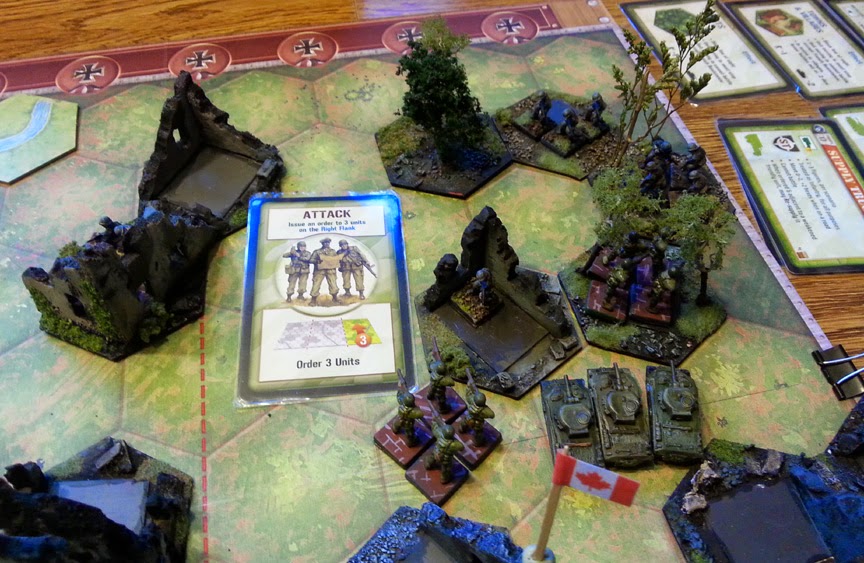 The only way to hunt them down is with cold steel! 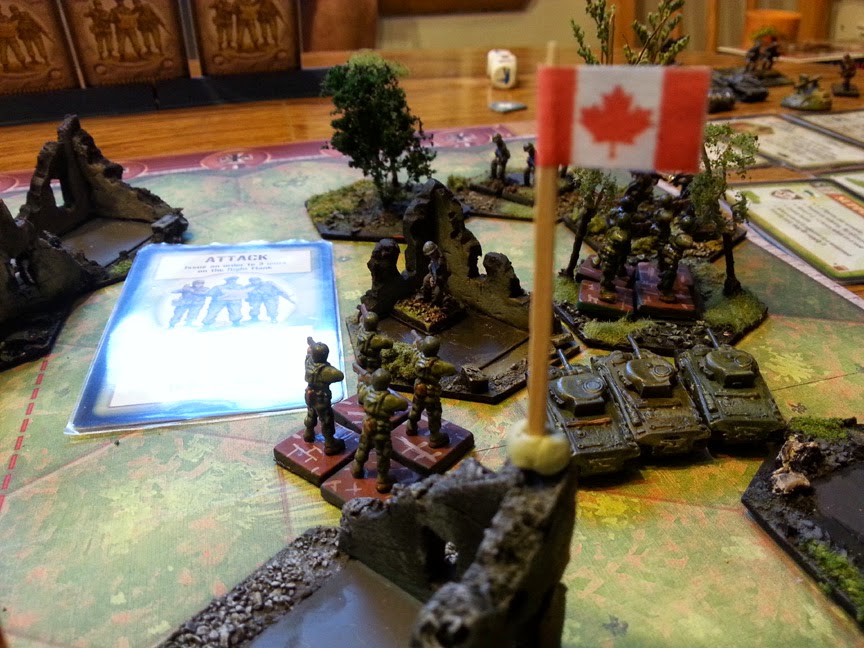 Meanwhile, enemy units continue to withdraw across the bridge. 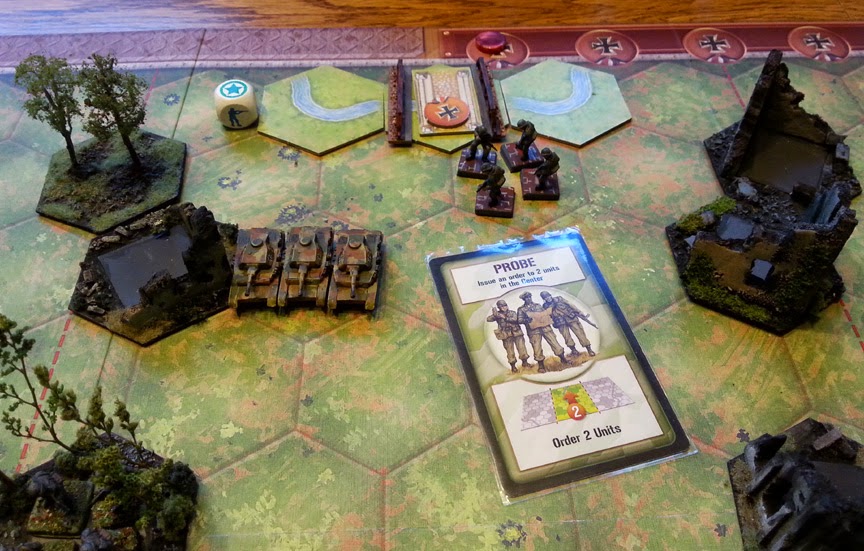 Trapped!  The Germans can only fight to the death now! 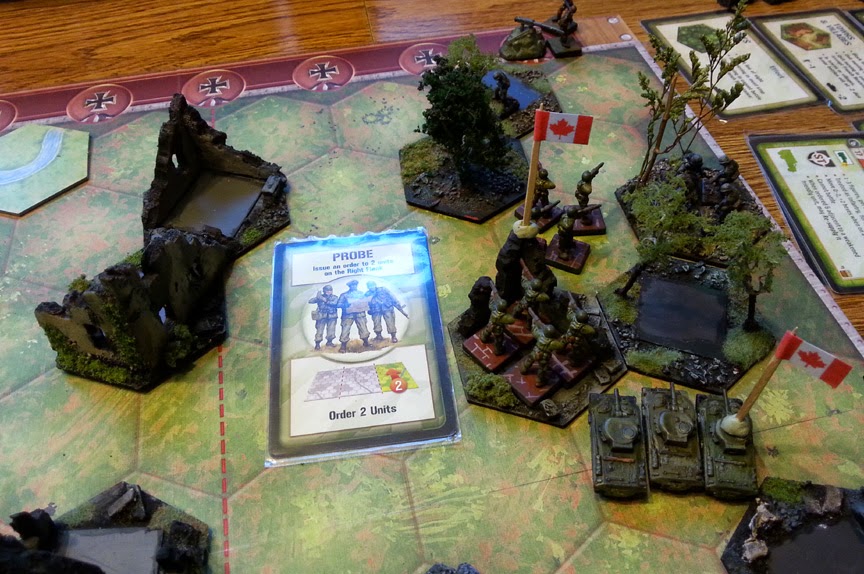 Run away!  Run away!

Can the Canadians prevent the escape of the rest of the Axis forces so they don't have to face them again?  Or will they link up with other reserve units and launch a counter attack?  Wait and see! 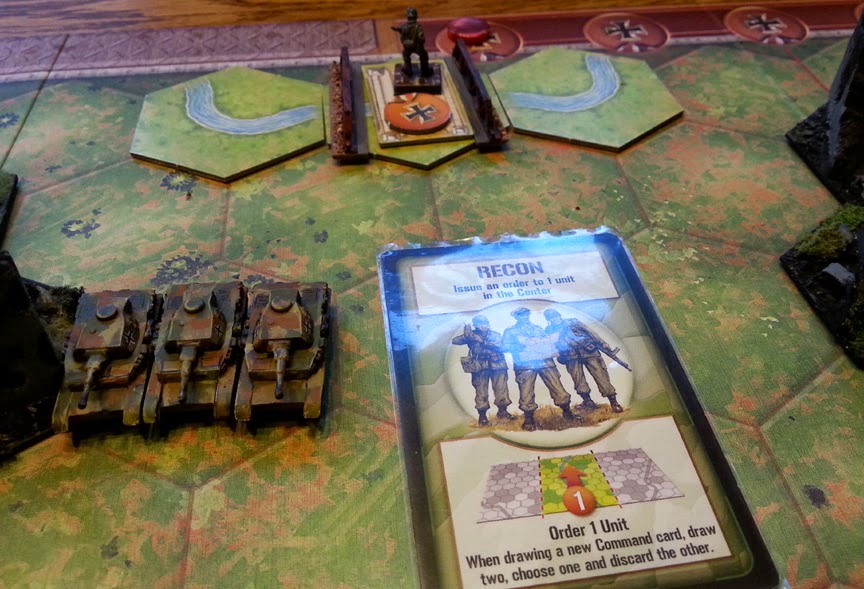