Reporting From the Front 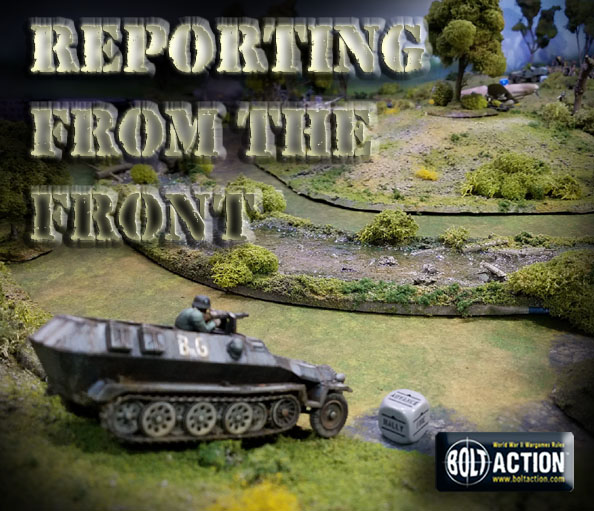 Over the last few months, I have been trying to prepare for my ultimate goal of filming battle reports for Bolt Action games.  This has meant a huge amount of work... starting with painting the armies!

I have enough of the early war French and Germans ready for some scenarios, with some variety in the army construction as well. 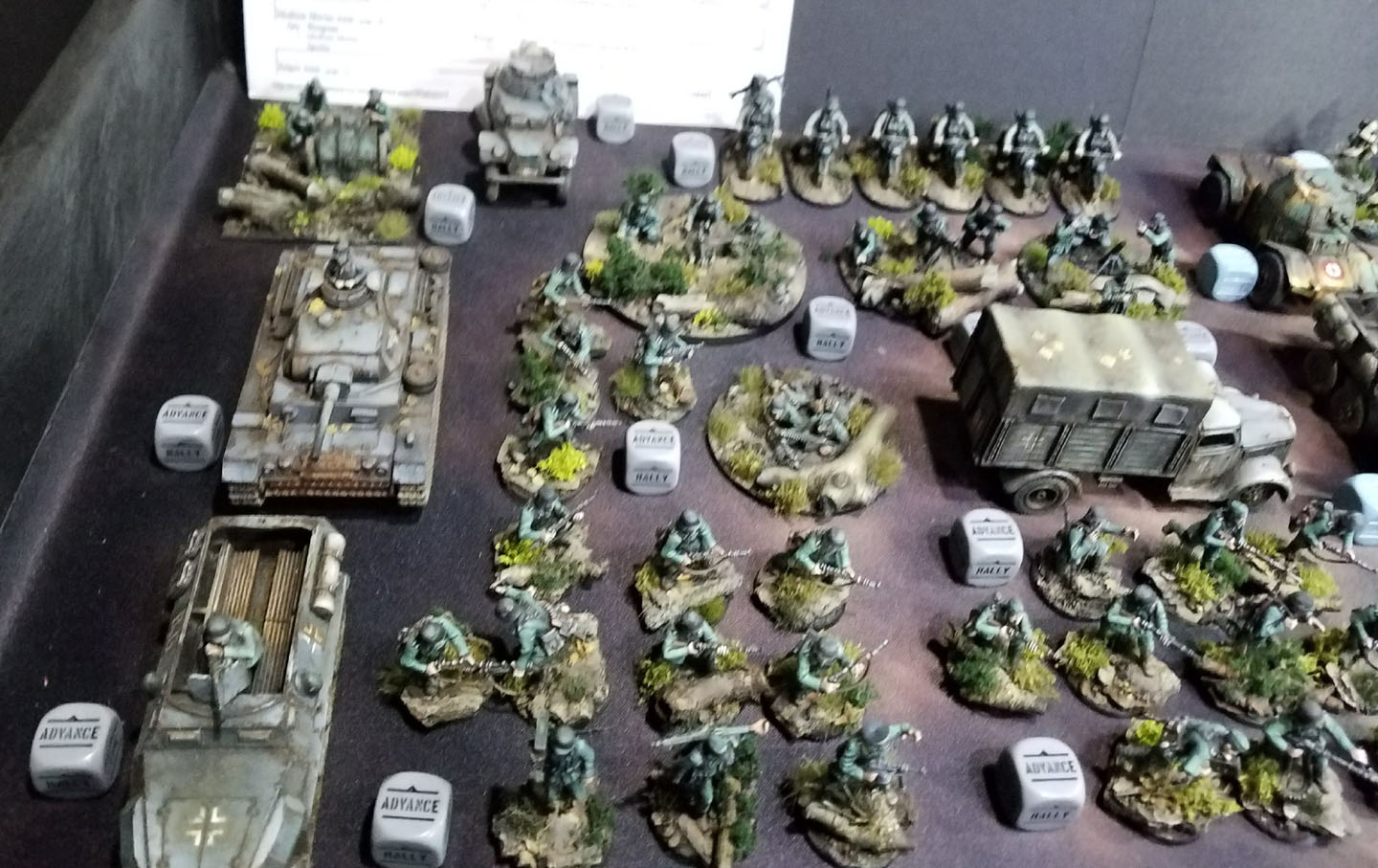 You have seen numerous how to articles on the terrain, the game mat, and even the painted backdrops.  There are dozens of articles alone showing how this Ardennes forest table was created.

Compiling dice, counters and other items also took a while. 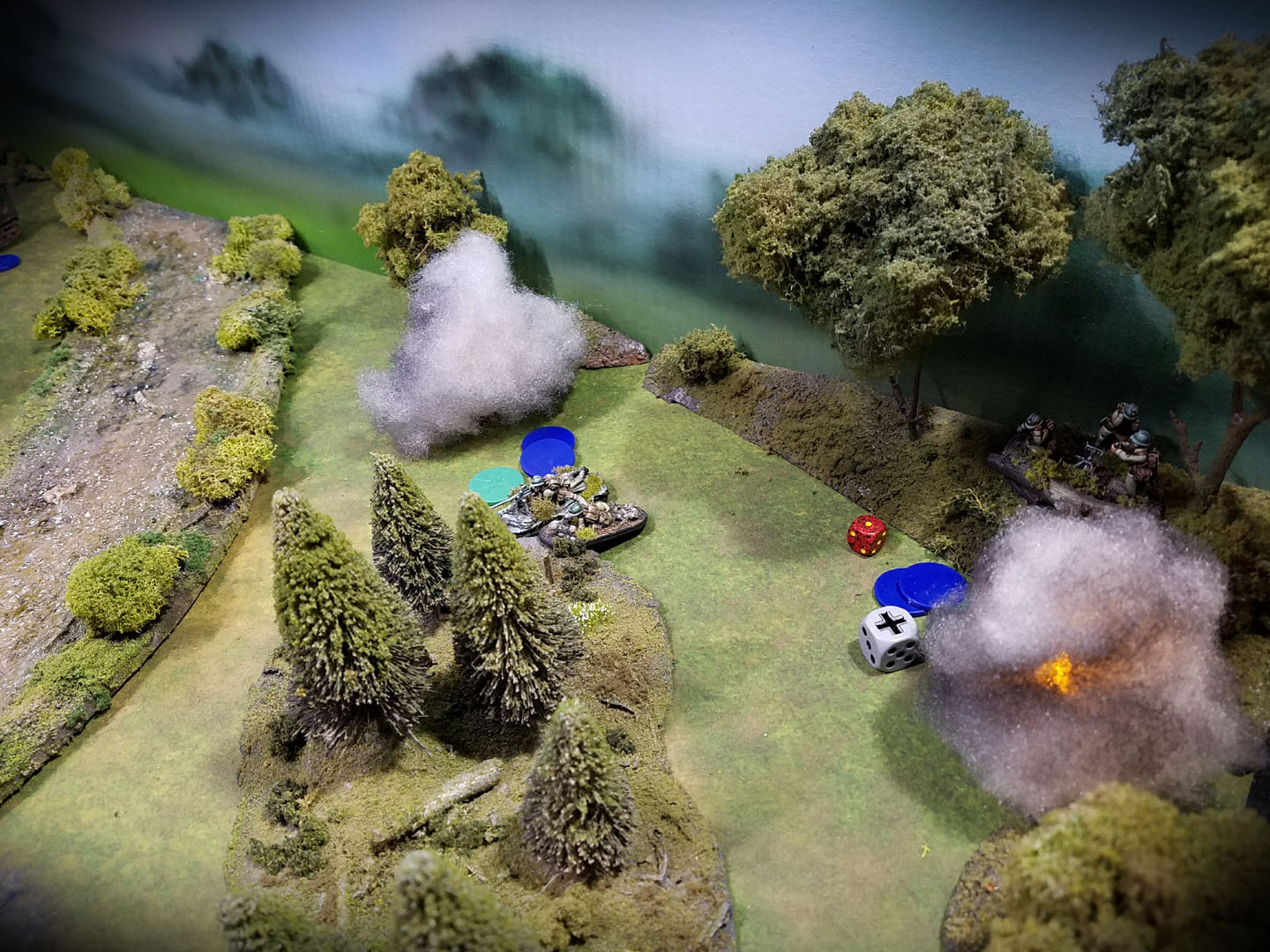 There are even some units that I scratch built, such as this medium 105mm howitzer for the French.  I have learned a lot over this massive project, to be sure.

It is hard to believe how much my approach has changed since I first started.  Now I am using oil paints for most of the figures and vehicles, and these are also demonstrated in several Facebook live sessions. 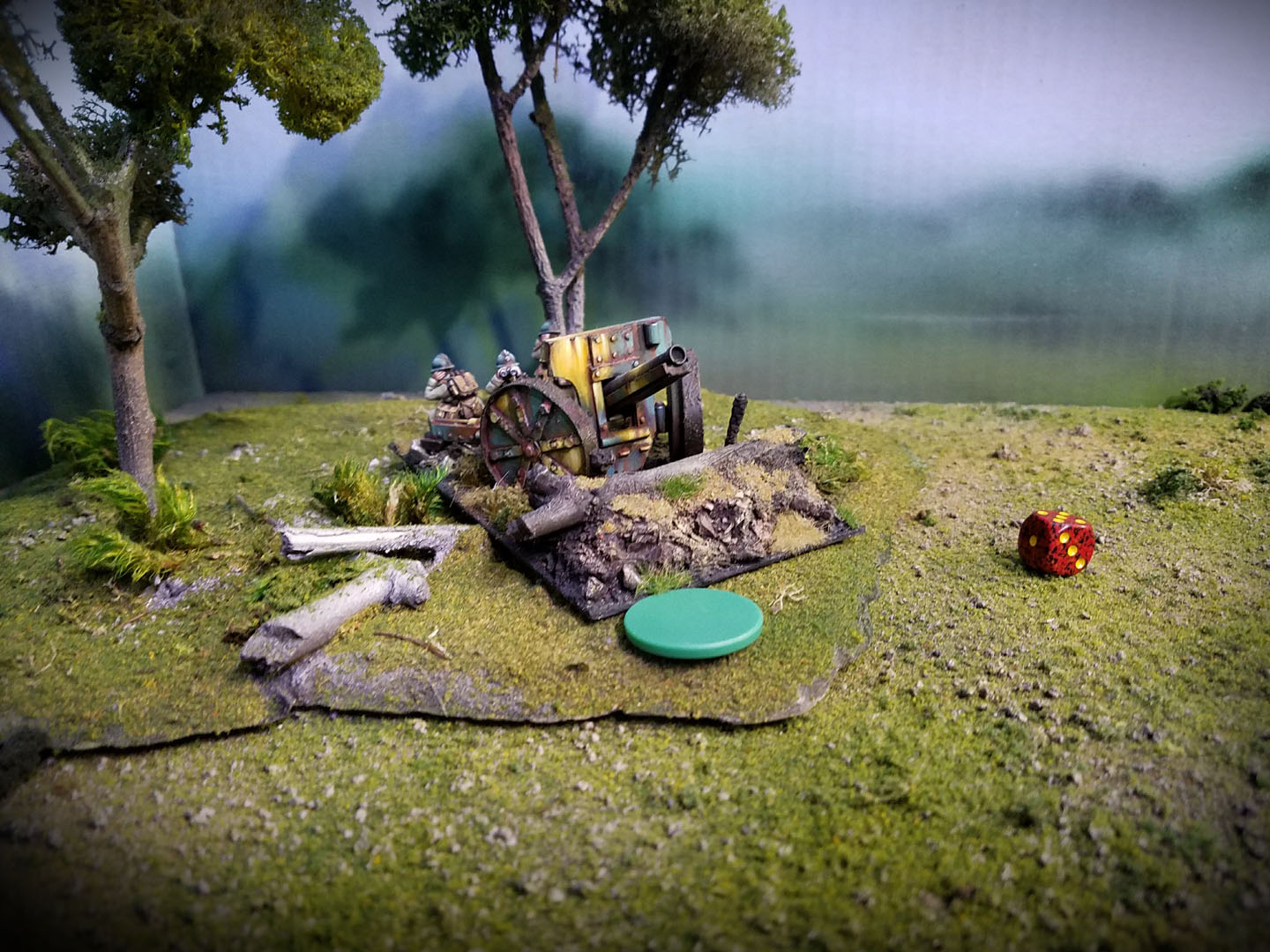 Here's another scratch built vehicle, the SDK 222.  It is great to finally see it on the table in a game, and not just in my photo booth! 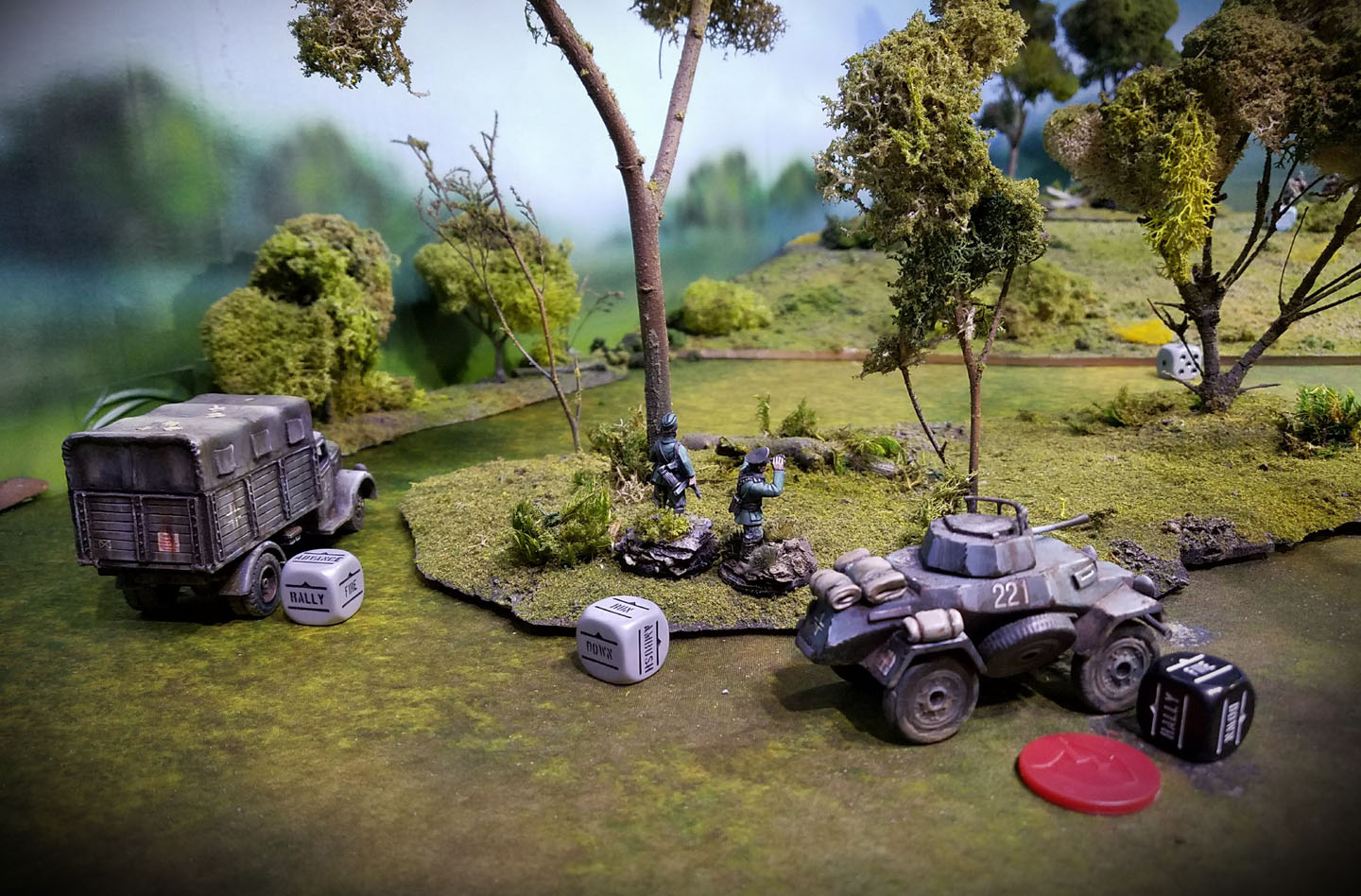 These are the kind of scenes that I had been hoping to see for so very long.  As I have been filming, I have tried to find the best way to balance out the action, the tactics, the mechanics, and the results.  It can be a lot harder than you think!

I have been modifying my approach with each turn in this first game, so if you notice a different approach or different angles, it is because I got a new tripod or made another realization on the fly... 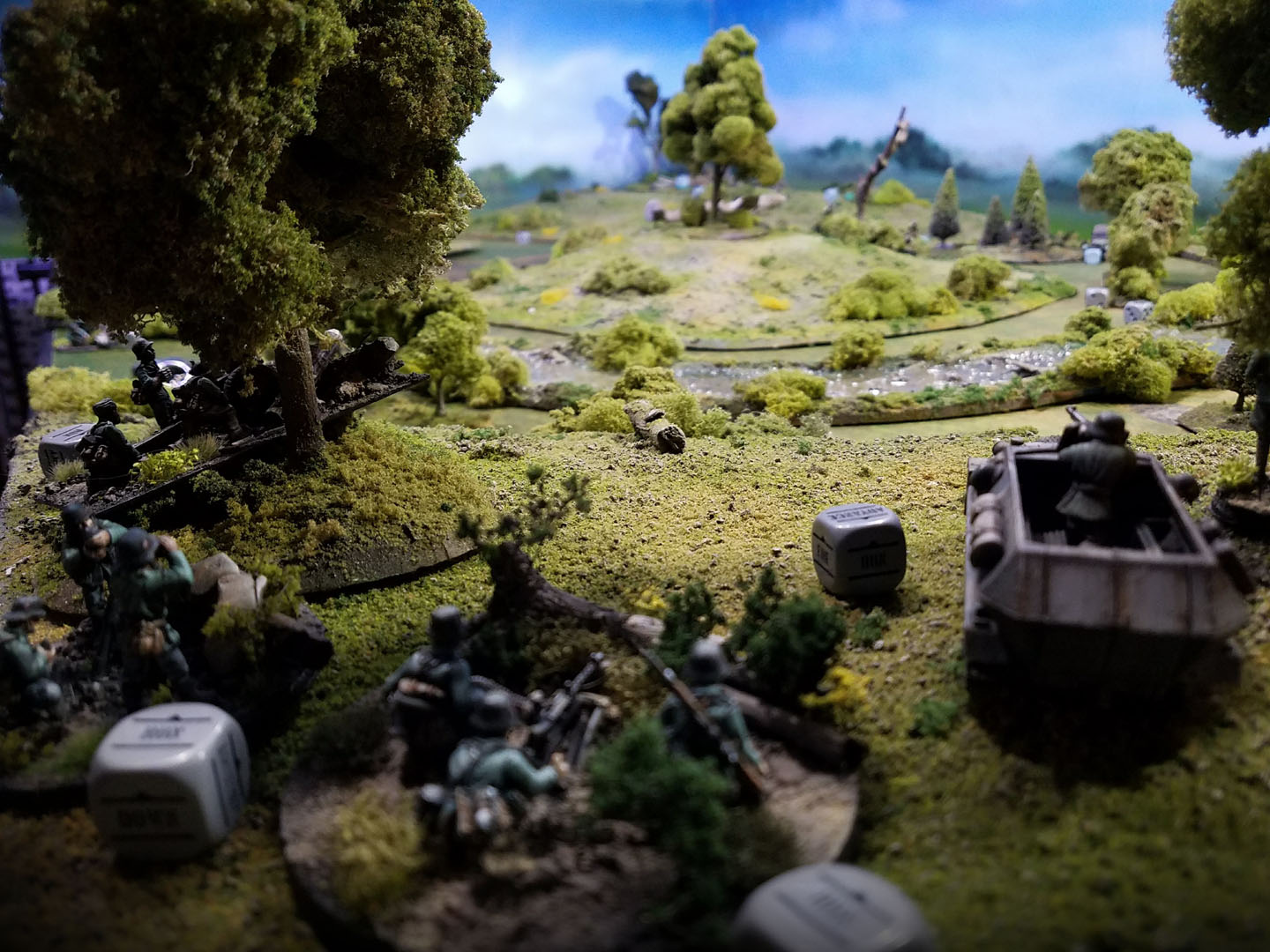 For my very first battle report, there are already some very classic scenes, such as the PZ 3 driving right up to the pesky sniper team (which had been on ambush the entire time), and then destroying a more distant Panhard armored car that was seriously threatening the entire German left flank.

This is the kind of thing I had hoped to capture, which is why I will be using the longer format style.  In this way, you will get to see my reaction to such crazy rolls of the dice, and the suspense of the next order dice, etc. 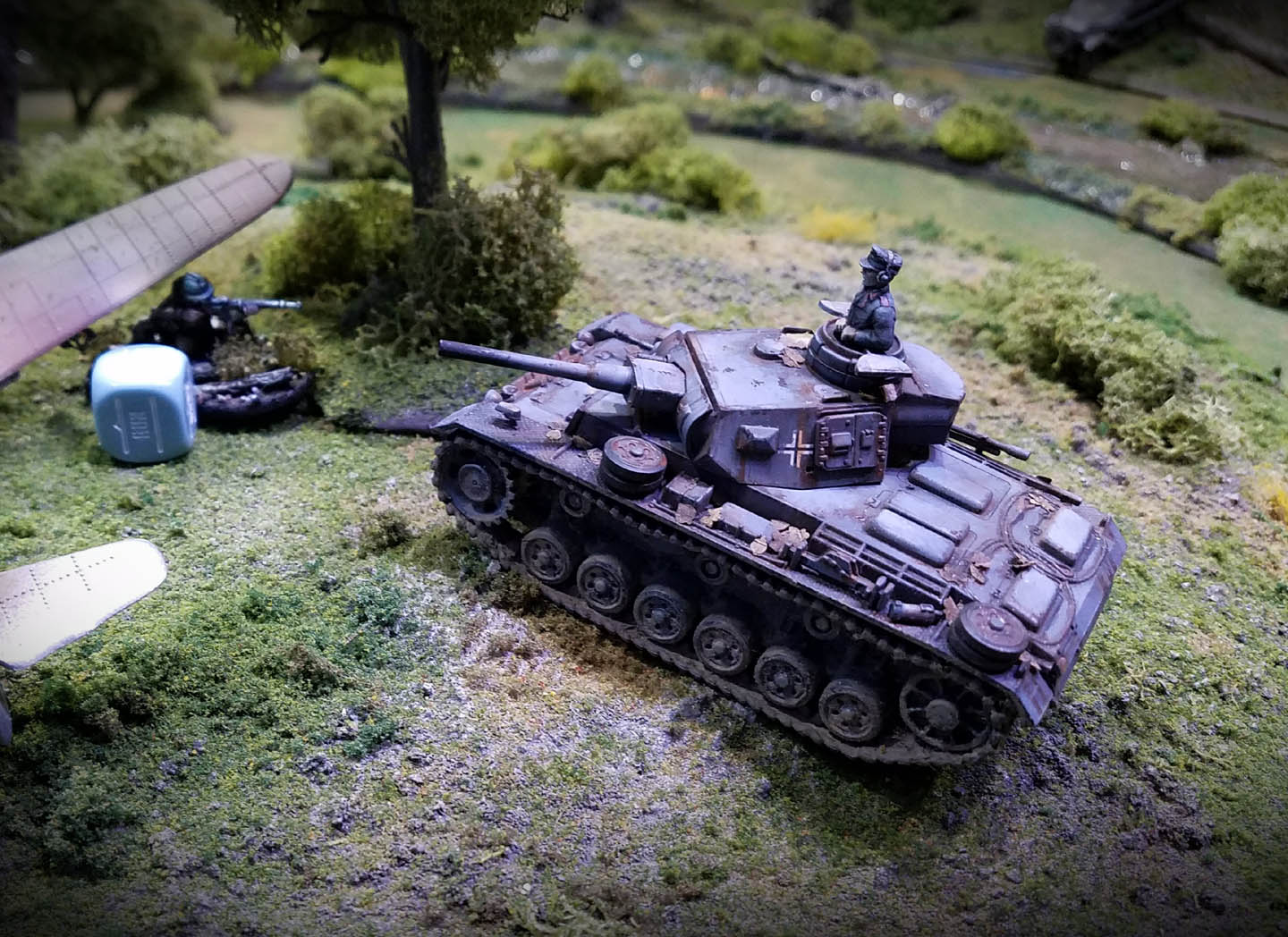 This will mean a lot of extra work, and a lot more editing, but I think that it will be well worth that additional effort.  Filming those live rolls and draws can mean finding a place for the camera to rest as you use both hands for other things...

You also have to think very quickly on your feet, as you don't have much time to mull over and ponder every possible strategy or action.  In some ways, it  is a bit like a tournament environment.

This picture really shows what I had hoped to capture in video form.  Something that looks as realistic as possible, so that it almost feels like you were watching a movie as opposed to a green board with some dice flying across it. I try to capture that feeling of reacting live to a situation, such as the very unexpected result of a few random machine gun bursts setting fire to the Opel Blitz transport full of troops! 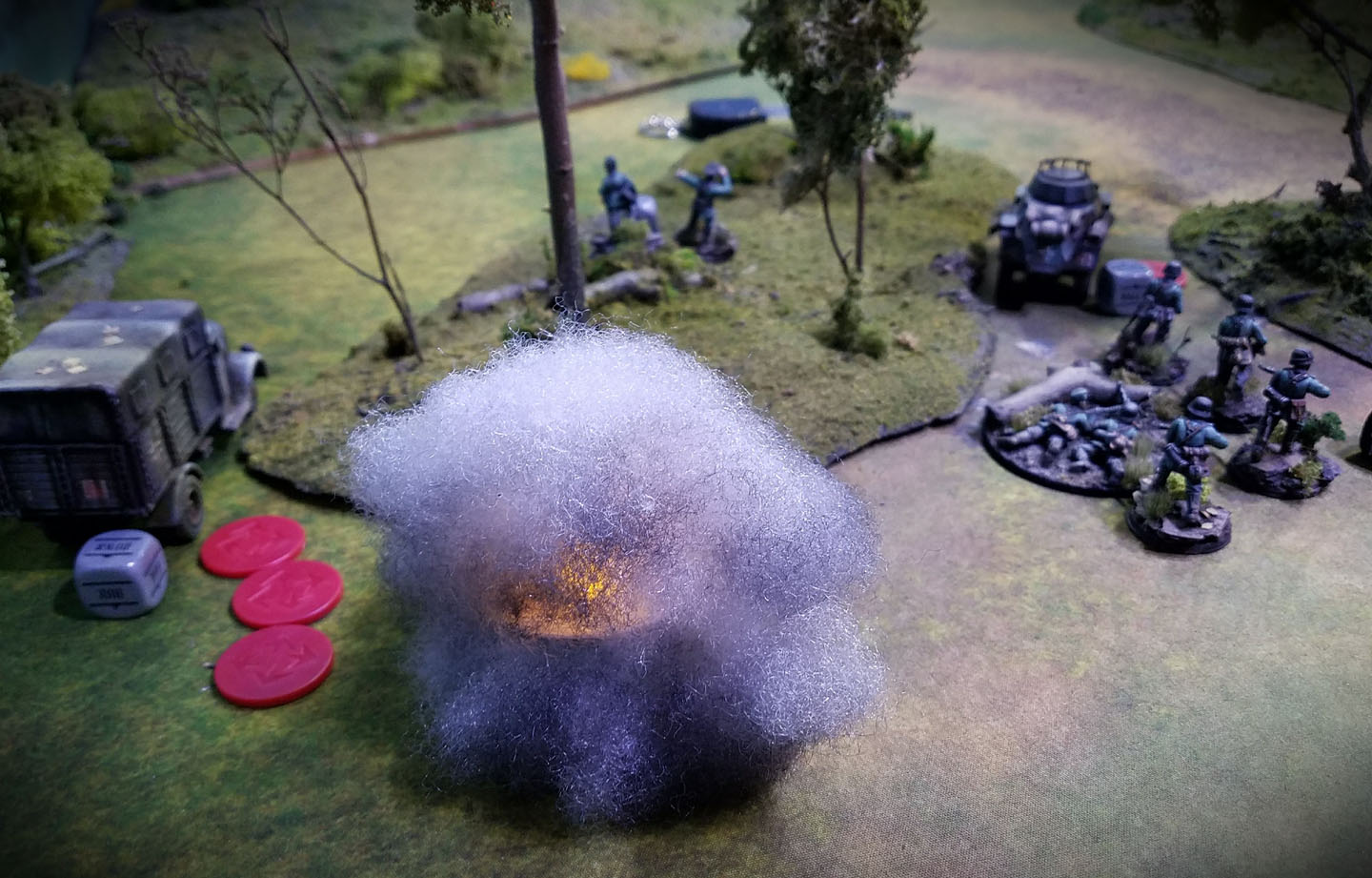 The other element I will try to bring to each of my reports is how terrain can really affect a battle.  There were so many instances of units being within a foot of each other, but no clear sight lines... just like the Ardenne forest!

I have been observing forests and hills for a very long time, so see how limited sight lines are, and what a nightmare it would be to move large forces through them.  These games will be very cat and mouse, and also very bloody. 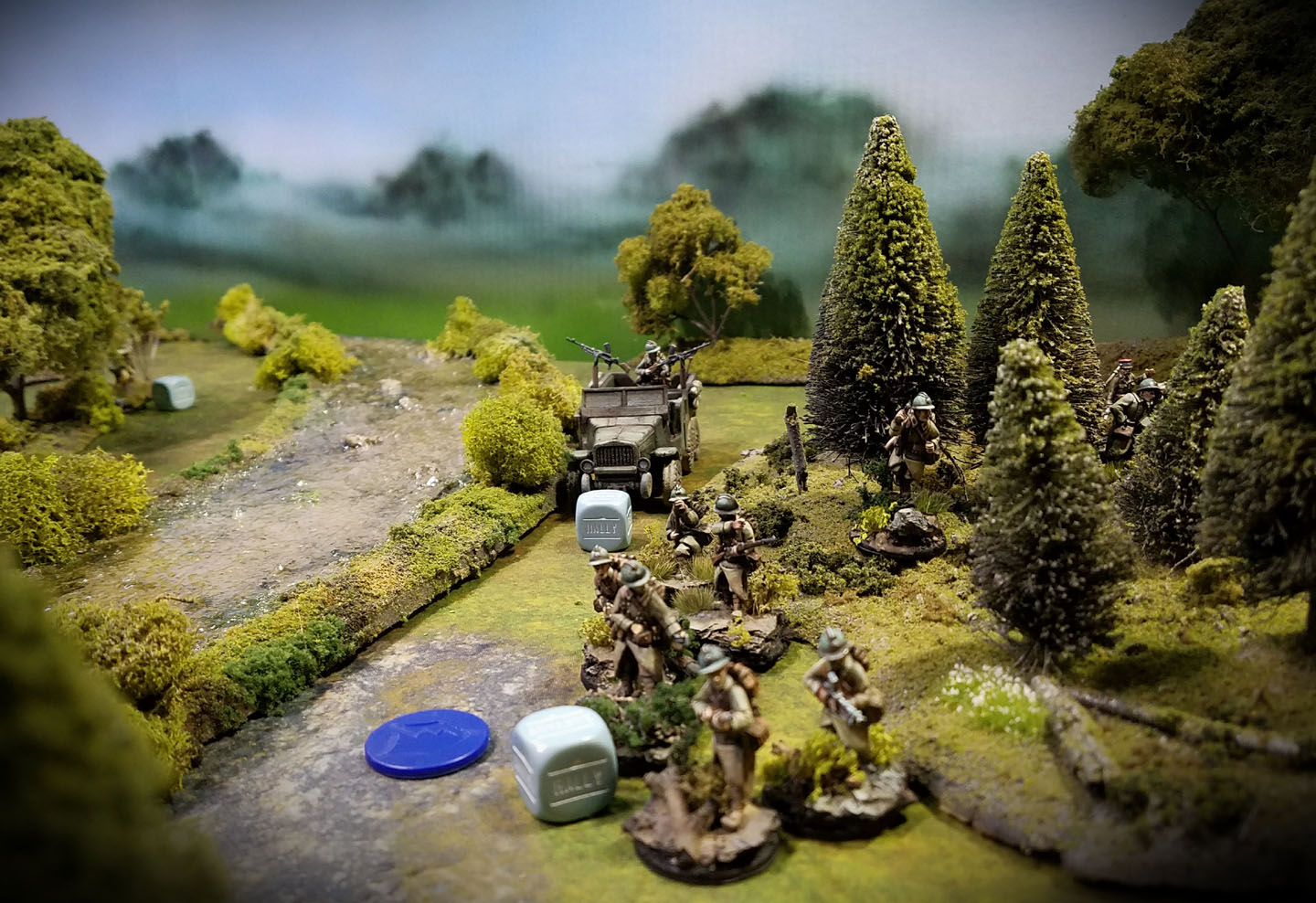 I will try to vary the scenarios, forces, missions, and the terrain as much as possible form one report to the next.  Campaigns will be arranged, and I might try to do the 'flip the coin' style reports, in which the same game is played over again, with the two sides switching defender/attacker, and so on. 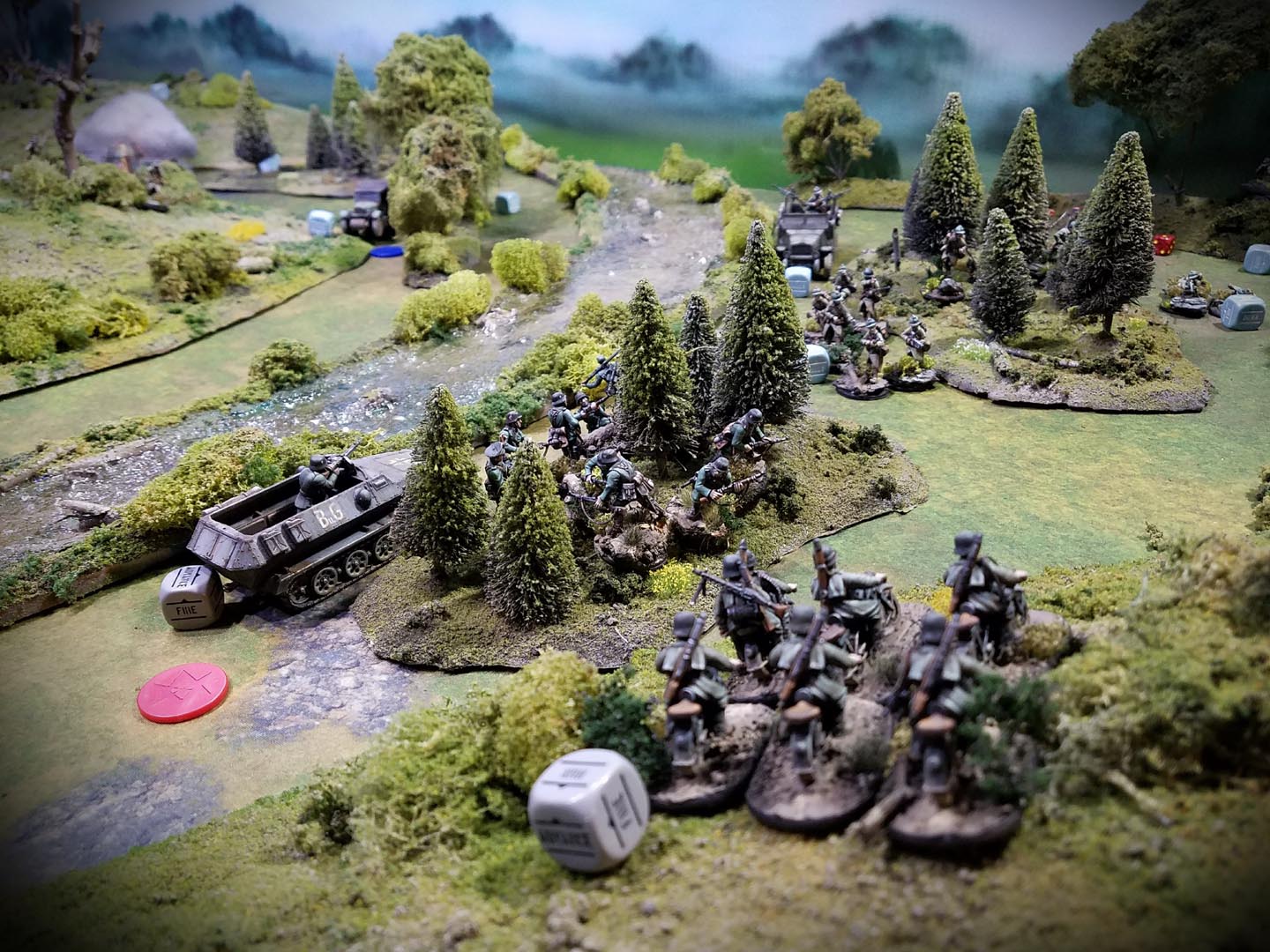 Re-learning the video editing software has taken a while, since the original machines where I did this work are now long gone.  I definitely need to update/replace several items of equipment to make this happen as frequently as I would like.  That is why a good portion of the videos will be part of the Patreon Page, so that I can try and get these new items.

It also takes a long time to create each report, with up to 13+ hours of filming and editing, followed by the rendering and upload times.

If you want to support this effort, and be sure to see all of the reports yet to come, here is a link to the Patreon Page.  I will also be offering more raffle figures of a Bolt Action nature too! 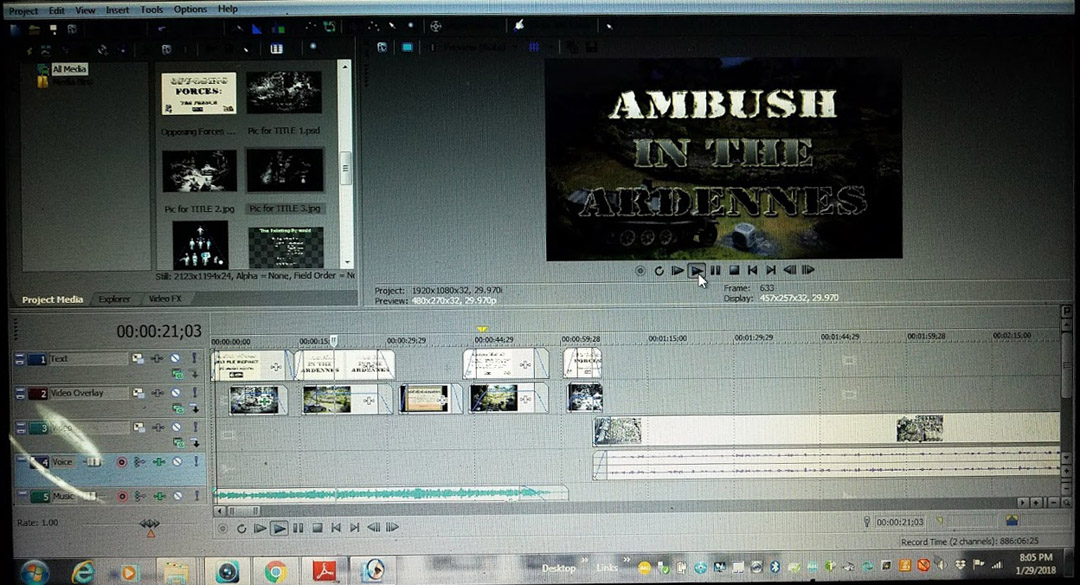