The Cries of the Tainted 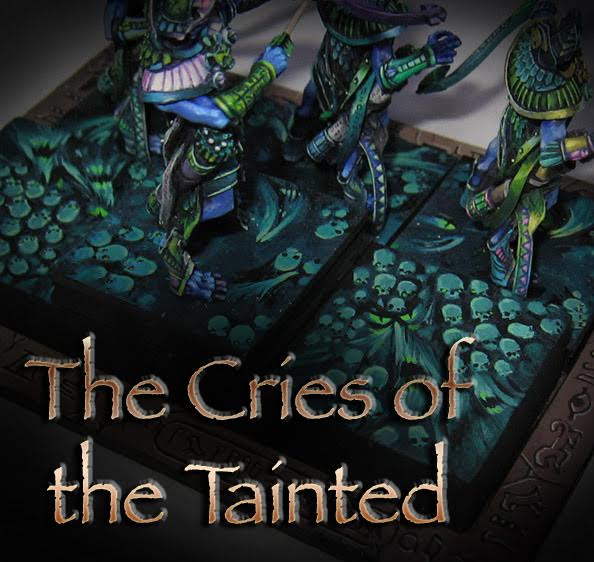 So, you have witnessed the secret method of the ancient inscriptions... now you will discover where the souls of the tainted reside!!

This is a simple unit filler for the Enslaved Guardian Archers, which begins as a piece of 3/4 inch foam.  A magnet was added for the 4th archer. I mixed dark green and blue with some black primer for the first layer. 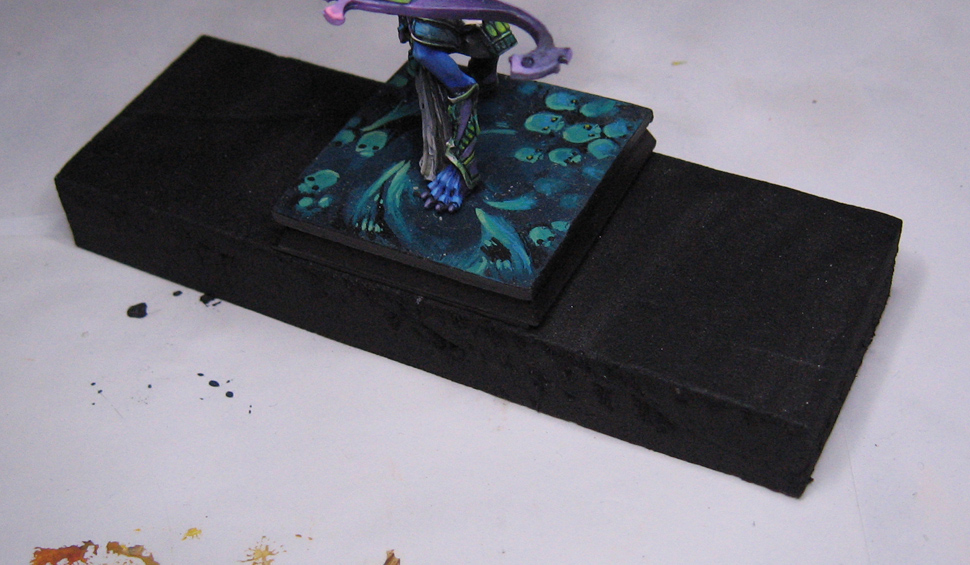 A second coat of blue and green was added to the upper surface, so that I would have some wet paint to work with... 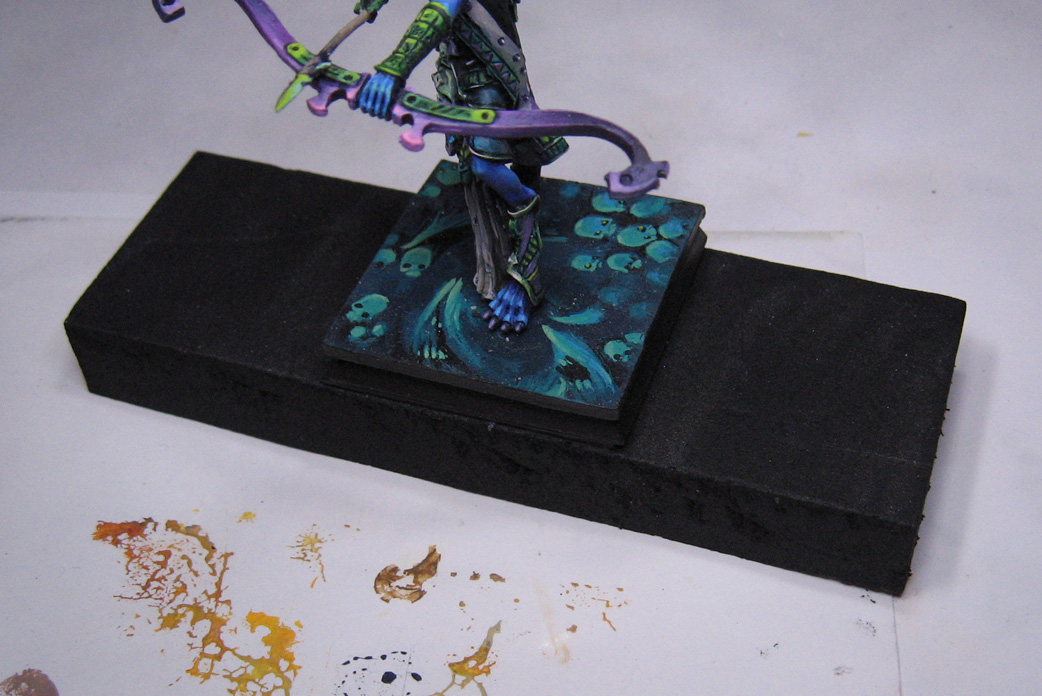 I mixed a teal green with some of that dark blue/green color for my first layer on the floors. 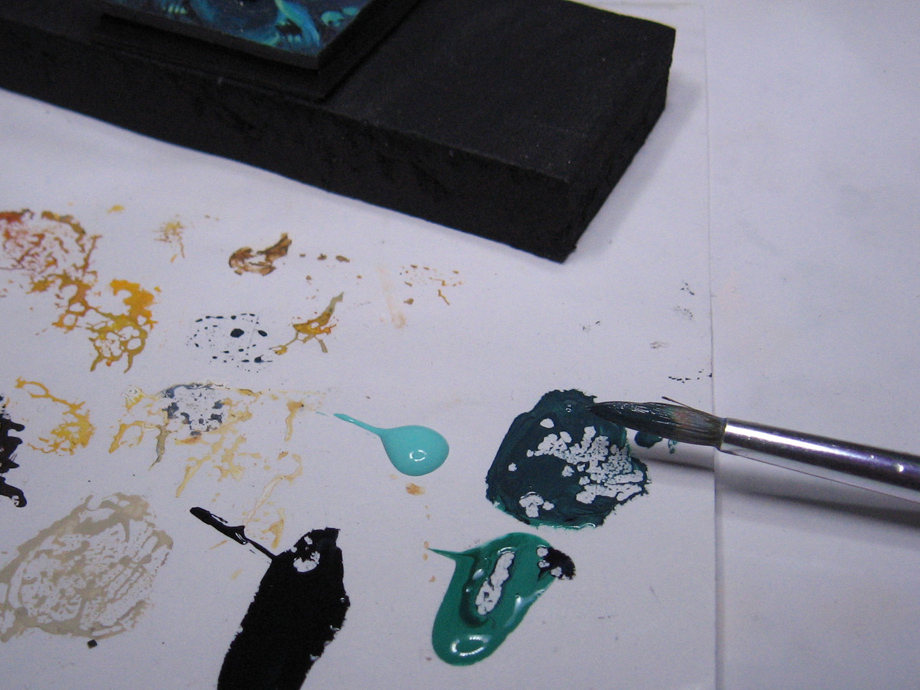 I then created a pattern of skulls and swirls (which will eventually be the demon faces).  I also kept the bases of the surrounding figures in mind, so that the patterns would fit in with the rest of the unit. 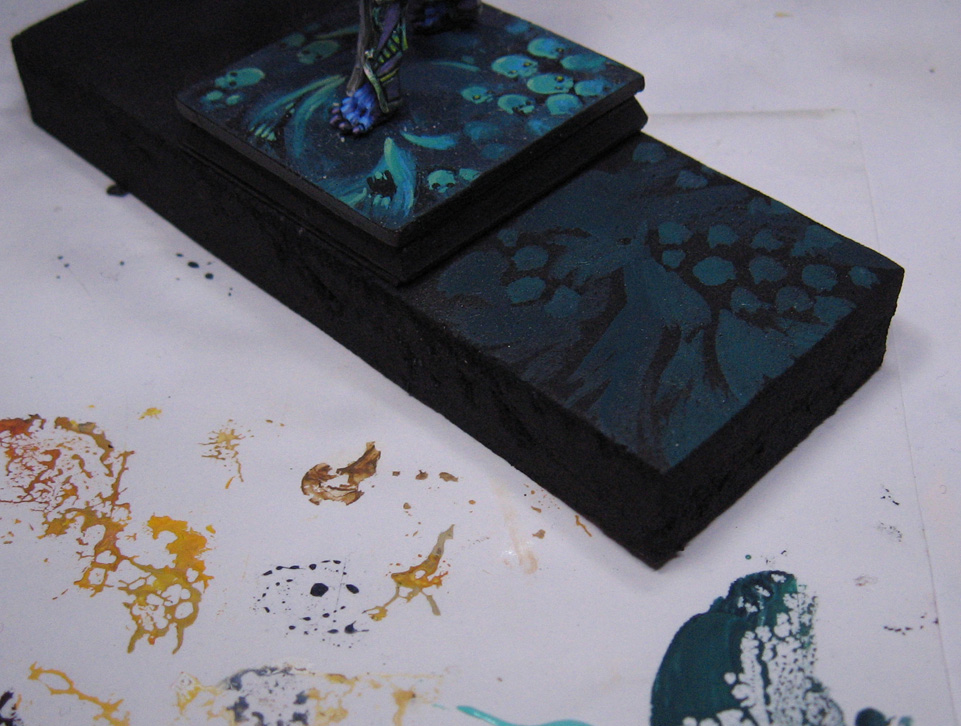 More and more of the teal color is added to the mix with each layer, so that I get more definition on the shapes.  Not all of them are done equally, however.  Some of them should be left darker than others, which gives the floor more sense of depth. 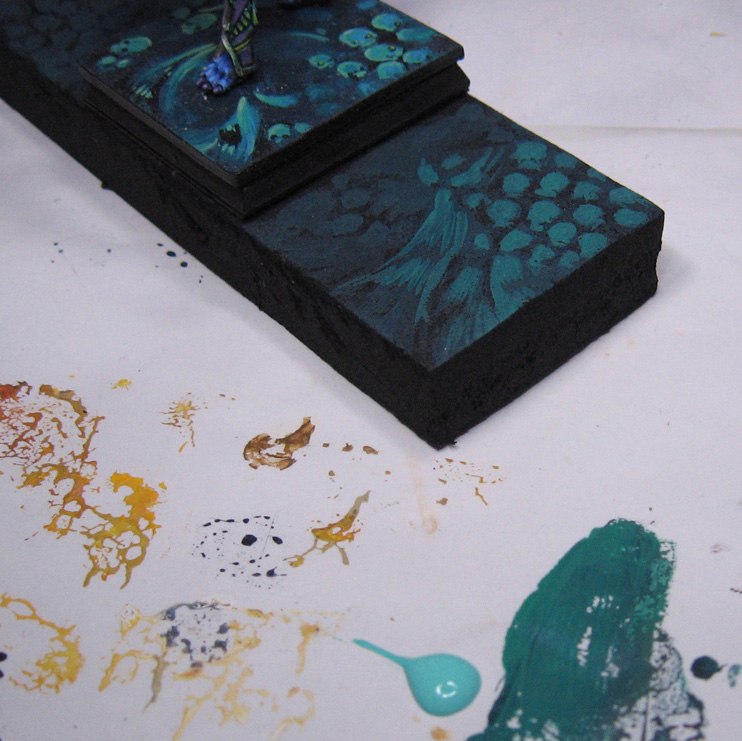 Both sides of the unit filler now have a good pattern, and I will continue to define the individual skulls and demon faces from here... 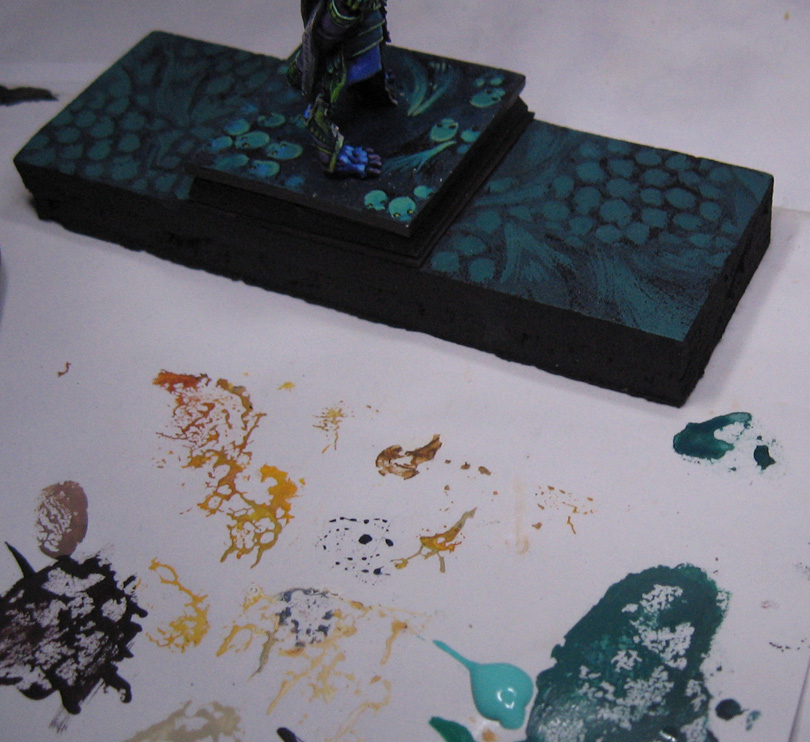 In this image, you can see the skulls have more shape, and the demon faces are emerging as well.  This is the key aspect of the effect, as you want it to appear that the floors contain the souls of the damned! 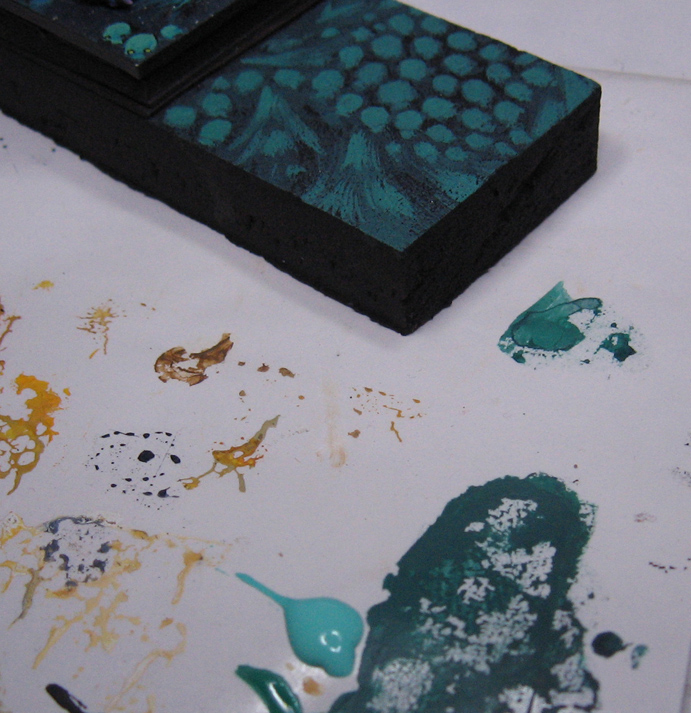 At this stage, the skulls and swirls are really starting to match the existing base.  I will do one more highlight on them before moving back to the dark tones. 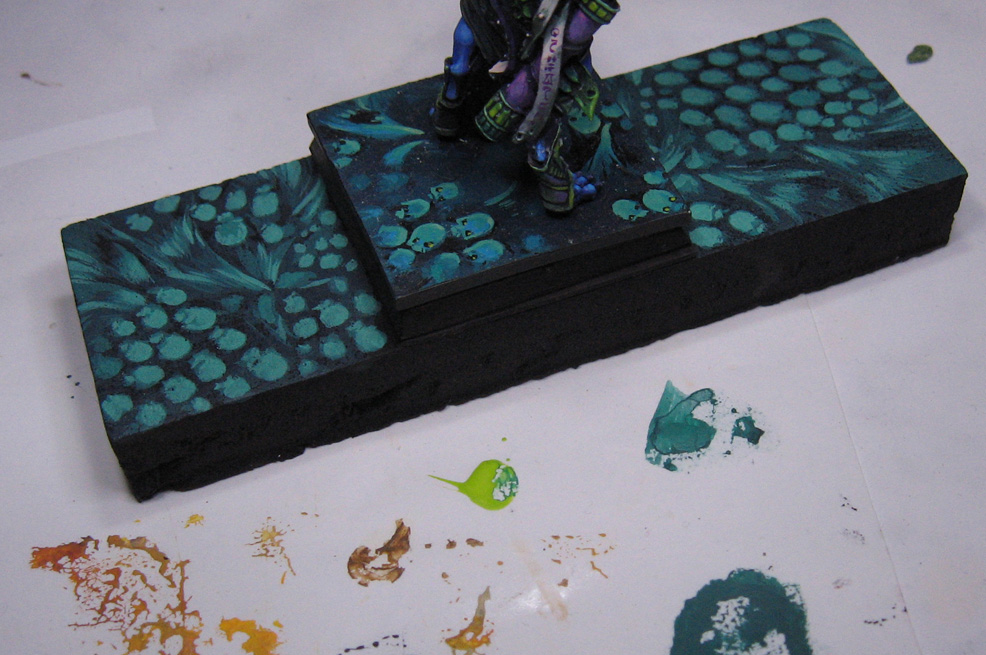 I used a brighter seafoam green for this highlight.  Again, it's very important to highlight some things, but not everything.  Some rows of teeth help indicate the faces of the demons. 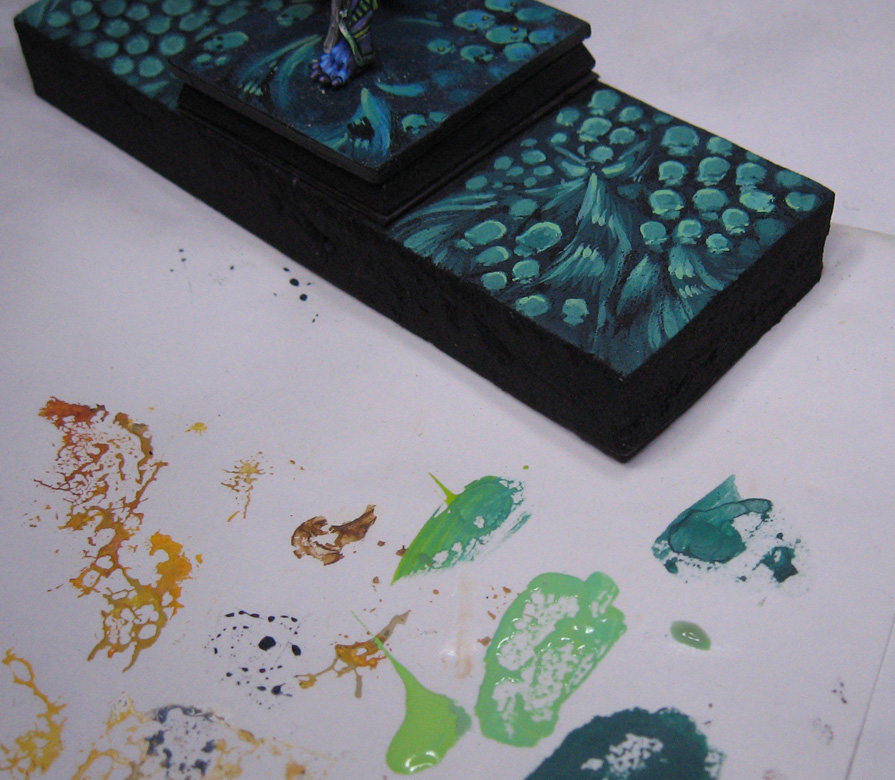 I attempted to make these parts of the unit filler more elaborate than the areas under the feet of the figures.  Since these would be clearly visible, there wasn't any concern about taking interest away from a mini that would be standing on them! 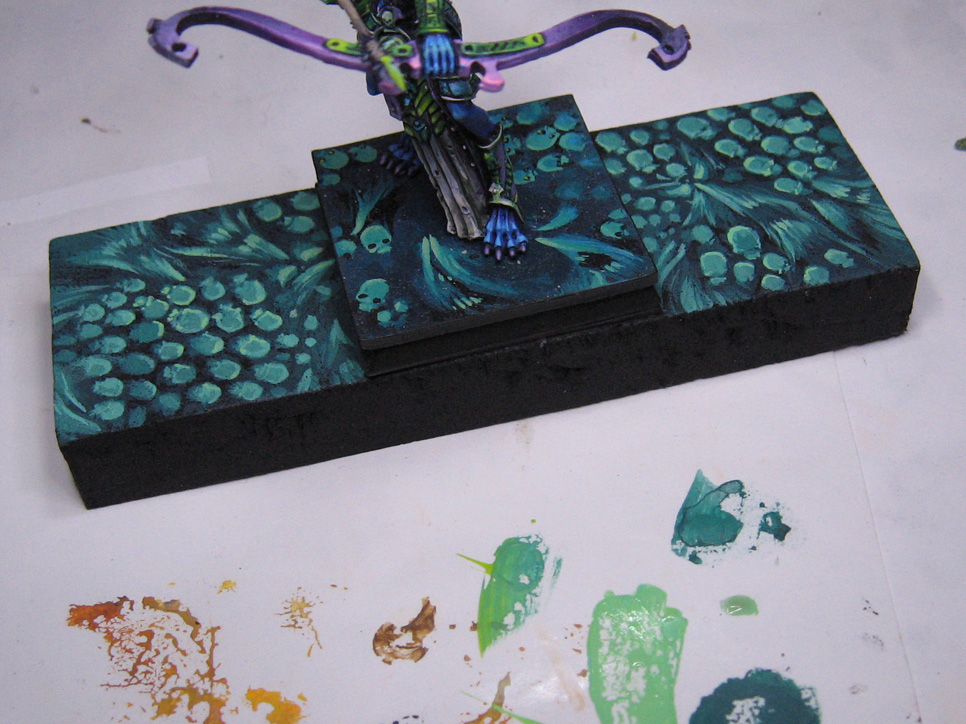 I used some Reaper blue liner paint to put some eye sockets on the skulls, and define a few more edges.  This would also help 'deepen' the effect, showing a small part of the abyss into which the souls have fallen! 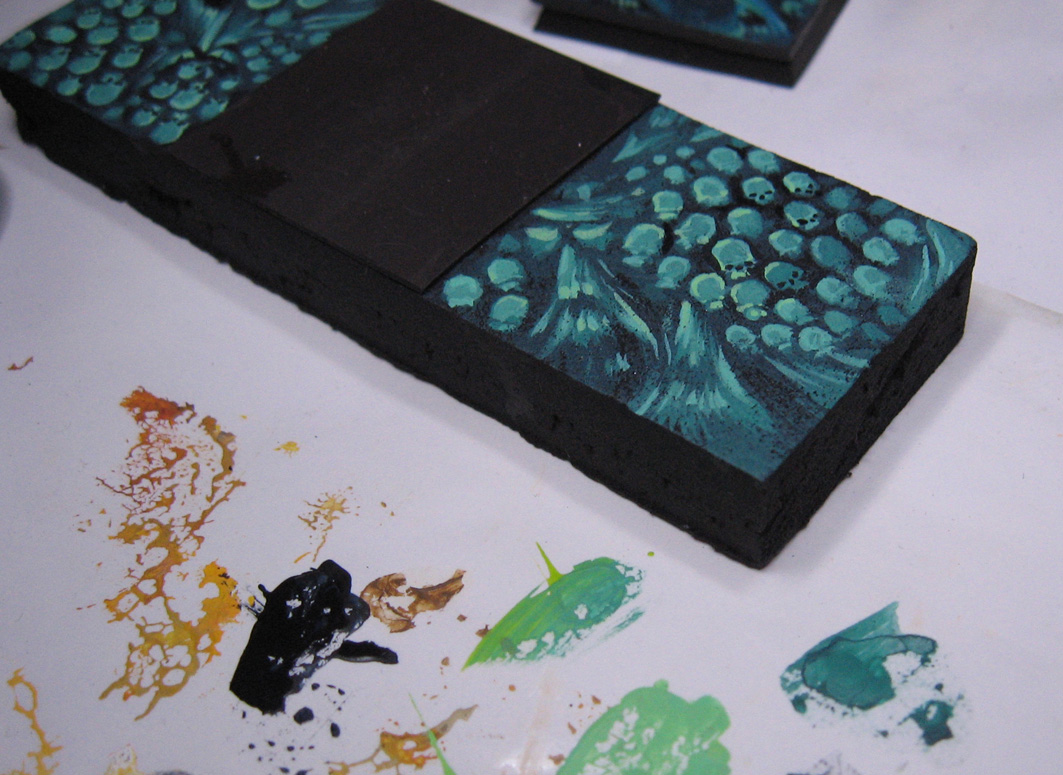 The demon faces got a little more dark added inside the 'mouths'. 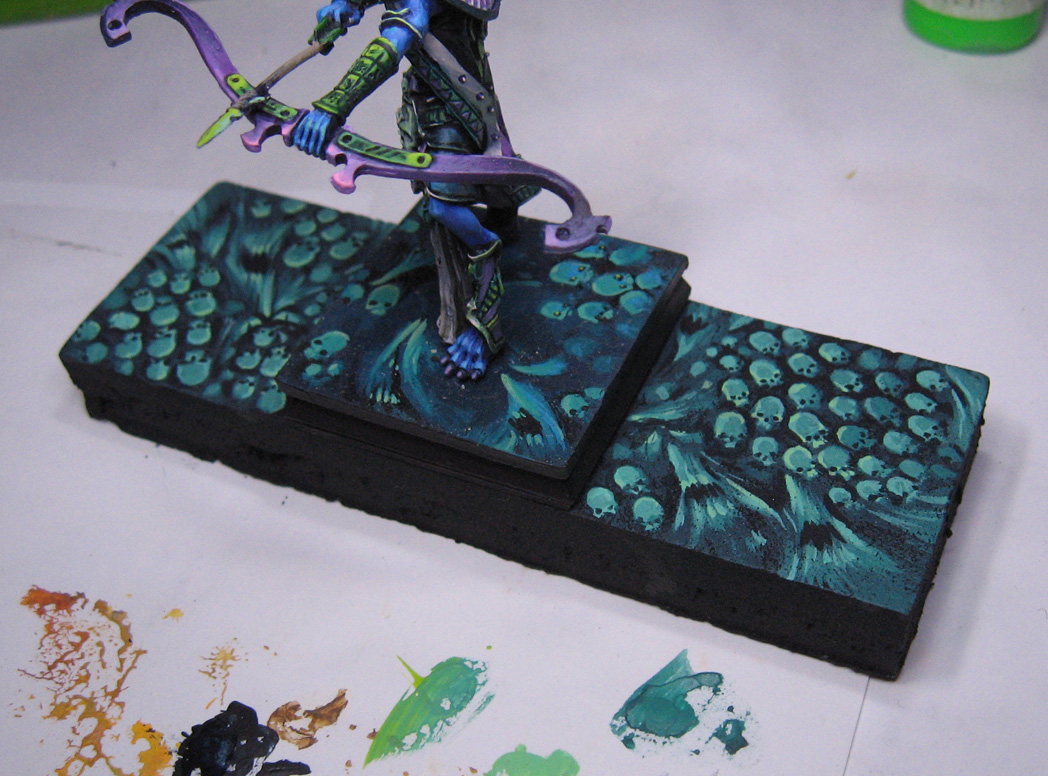 A small amount of fluorescent green was used to create the eyes of the faces.  A few tiny glowing dots were added to a few of the skulls as well.  This would bring some of them forward, or even make the 'shadowy' skulls in the background appear as if it was just two glowing eyes looking at you! 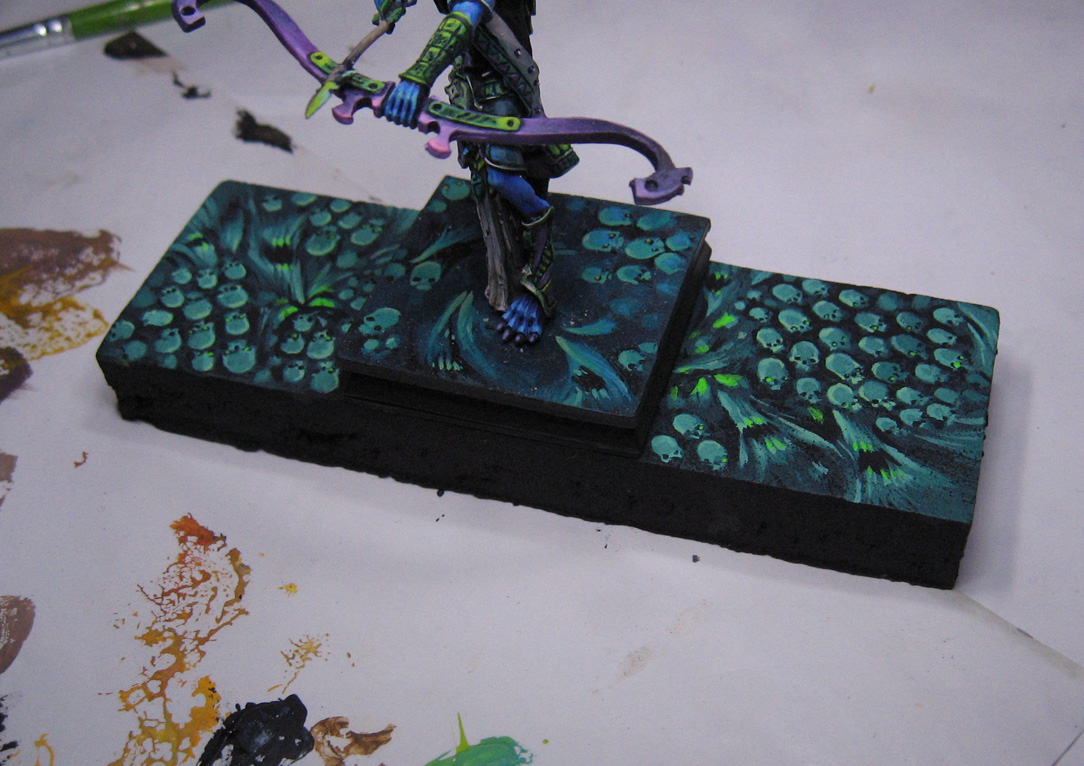 The dark blue was used to make some final touches to the demon eyes...

And PRESTO!  Unit filler. I will snap some finished shots so you can see the overall effect.

I loved this effect so much, I made "Painting Demon Marble" one of my kickstarter instructional videos.  As I love basing, I ended up filming a dozen different kinds of basing techniques!  Here's a peek at the 'core' video, which shows how you can make the sculpey bases:
https://www.youtube.com/watch?v=KW80jZhpvsg


They are available on USB drives directly from me, and also from Kings Hobbies and Games: 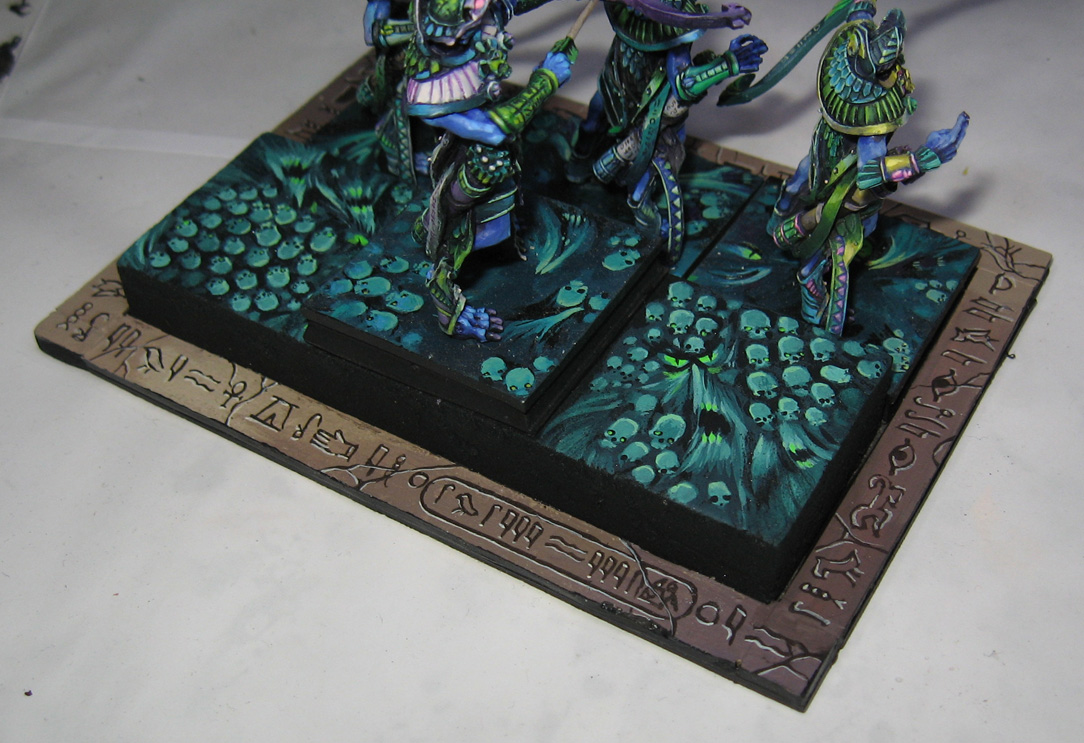