The Axles of Evil ride again: Yes we Khand. 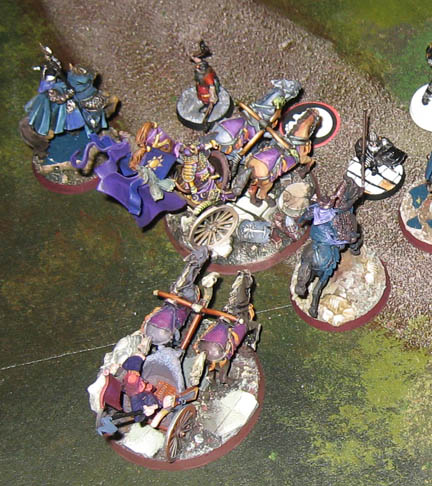 We head back to Middle Earth for round two, and we also head back to the Domination scenario, which is the first of the official scenarios that we tested.  For those who have not been following these battle reports, all of them are 600 points.

Rich rolled out yet another new army, this time with Gimli and Boromir (and Pippen tossed in for good measure).  His model count was down to 28 from the previous 41, but now he had a lot more might on his side.  I didn't have any individual characters that could kill off either of those guys very easily!  Prior to the game, I assumed that I would have to count on the spread out objectives minimizing the impact of the two big heroes.  They could only contest two of the 5 scoring counters, and my higher mobility and hitting power should let me clear out the remaining three for the points.

Here is the board layout. 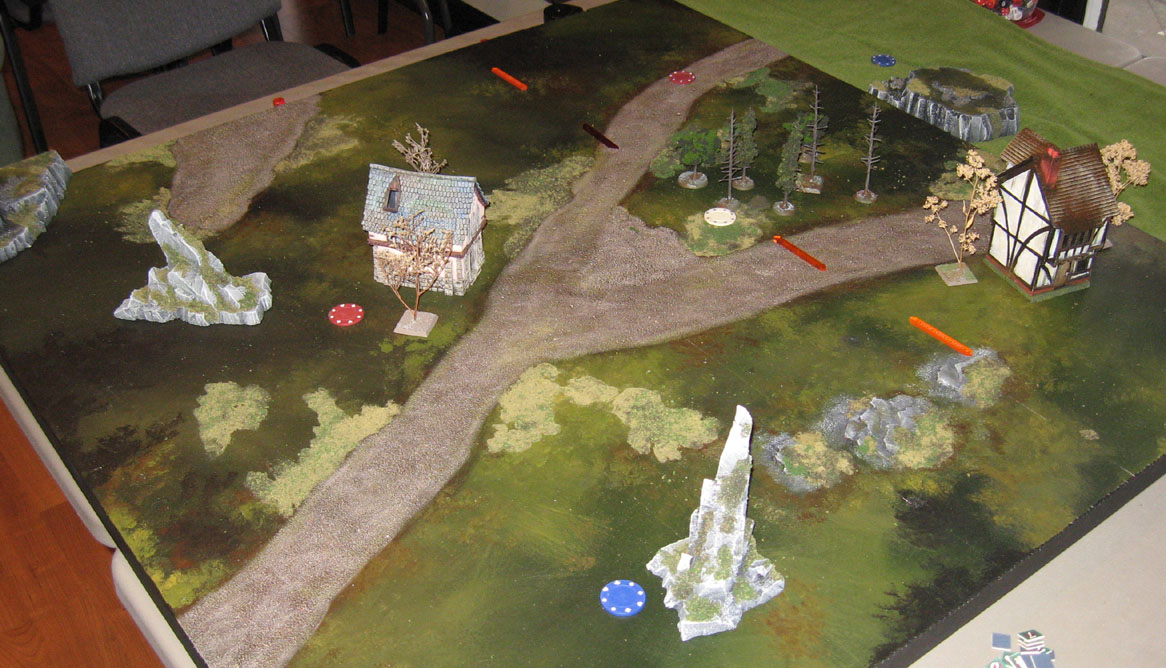 We deploy.  As usual, once a unit is stuck in that forward deployment zone, everything else kinda has to go there as well.  I make sure that the drum is right in the middle of everybody, thus giving me that +3 move.  Everything Rich has is right on the line.  I put the King and his men all the way to the left, giving me the option of zooming towards the two objectives on that side of the board (hopefully spreading out Gimli and the rest of the Gondorians), or smashing into that unit with the cavalry. 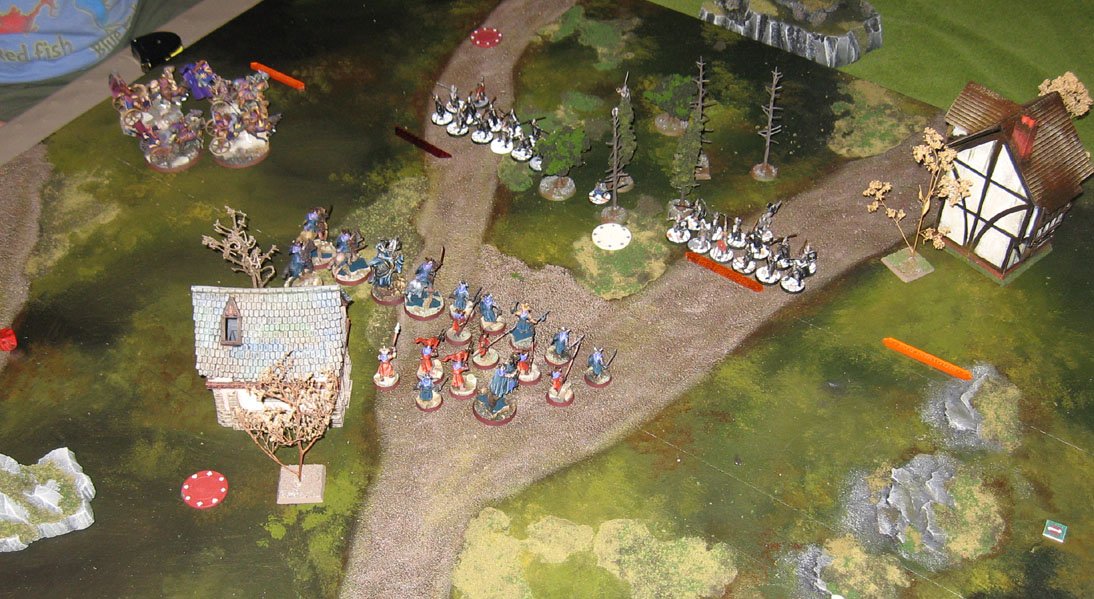 The way things work out, I send a few non-shield pikemen towards the two objectives in my deployment zone, along with some Black Dragons in case Rich send guys after them.  Everything else goes for broke in a mad charge against the Gimli unit on the left.  I had enough movement to cover the 8-10 inches between us, and I figured this Big Gamble would lead to a quick win or a very rapid defeat! 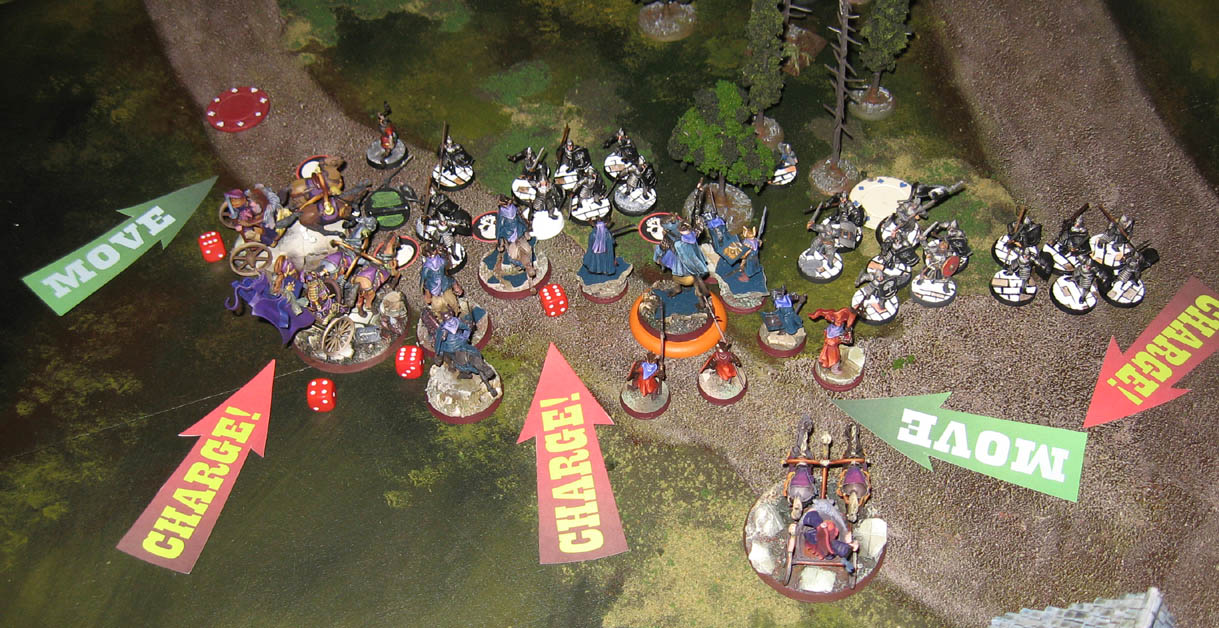 My initial charge does not go all that well.  I either lose fights, or don't get kills.  My Kataphract captain is unhorsed, leading to a rather odd situation where I have 2 Easterling captains standing right next to each other!  This leads to counter charges by Rich, led by Boromir and a Gondor captain.  I lose 7 of those 50/50 rolls in a row for contested heroic actions!  Yikes!

However, the counter charges don't go as well as they could have (even though Gimli would kill off 2 chariots), letting me survive long enough to regroup.  I also start walking the extra warriors from my held objectives to outflank the Gondor counter charge. 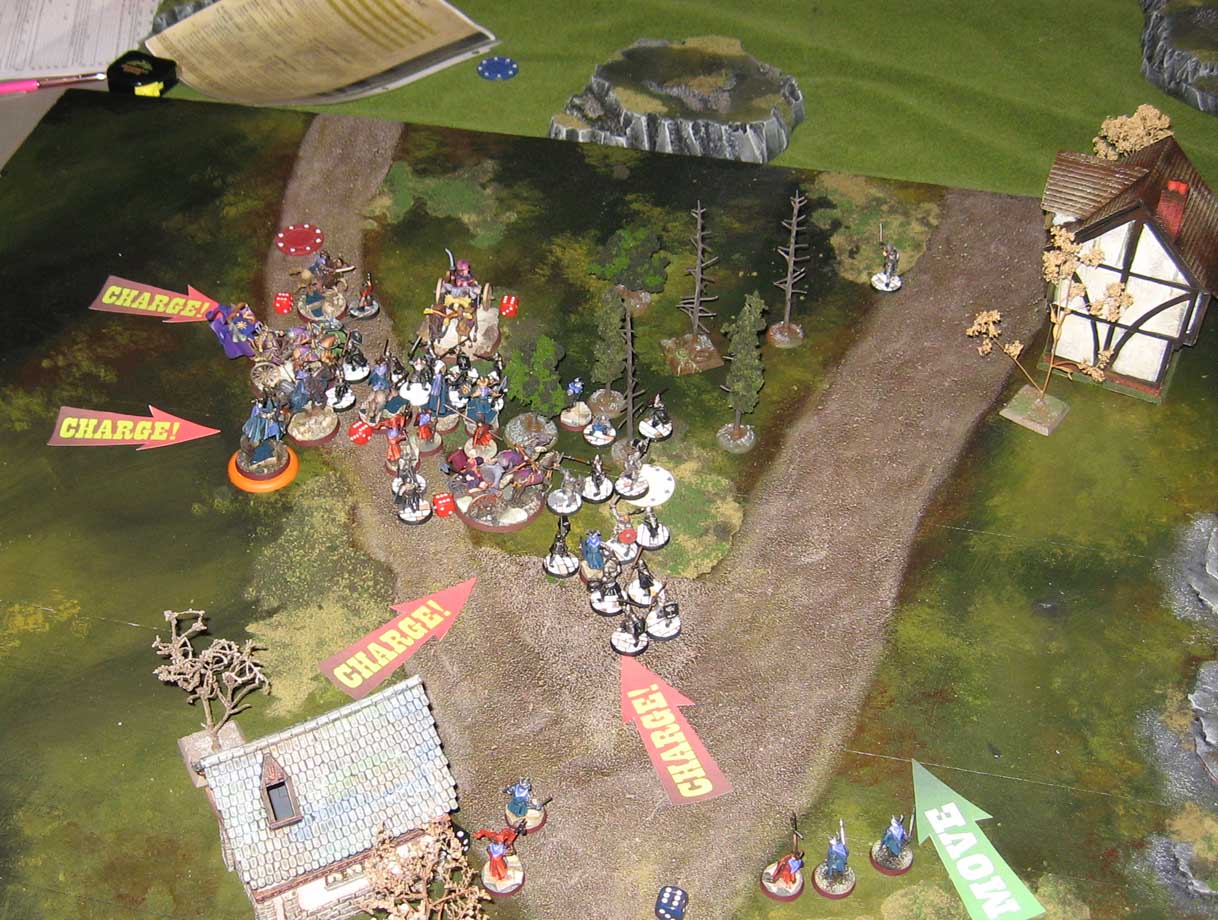 I keep hammering away at the Gimli unit on the left, getting off as many chariot and cavalry charges as I can. Meanwhile, the 2 Black Dragon captains are busy fending off all sorts of attacks.  One of them even fends off an assisted attack by Boromir!  Shielding gave him 4 attacks, and when combined with defence 7 and fate, it kept him alive! 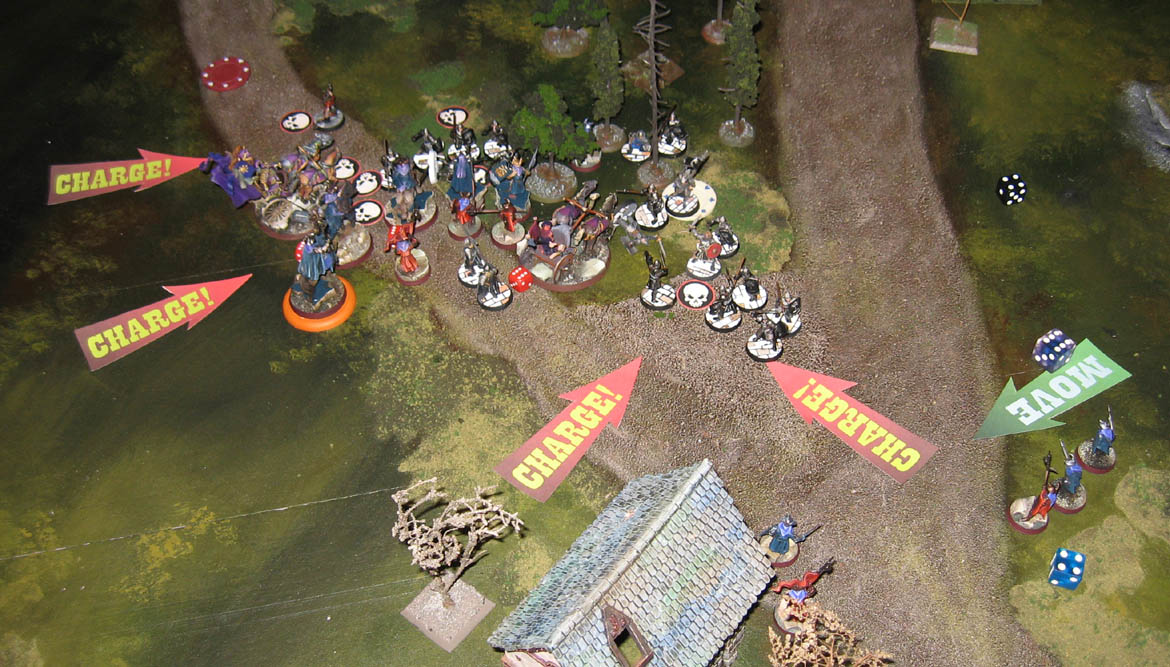 My move towards the flank of the Boromir unit did peel off a handful of Gondor, which proved to be key.  It reduced the amount by which I was outnumbered, letting me slowly turn the tide in the big scrum at the crossroads.  Boromir and 2-3 additional guys were fighting just one of my guys at a time, which gave me the 1 on 1 or two on one matchups that I needed.  The captain in particular were huge, since they could withstand those assaults much better. 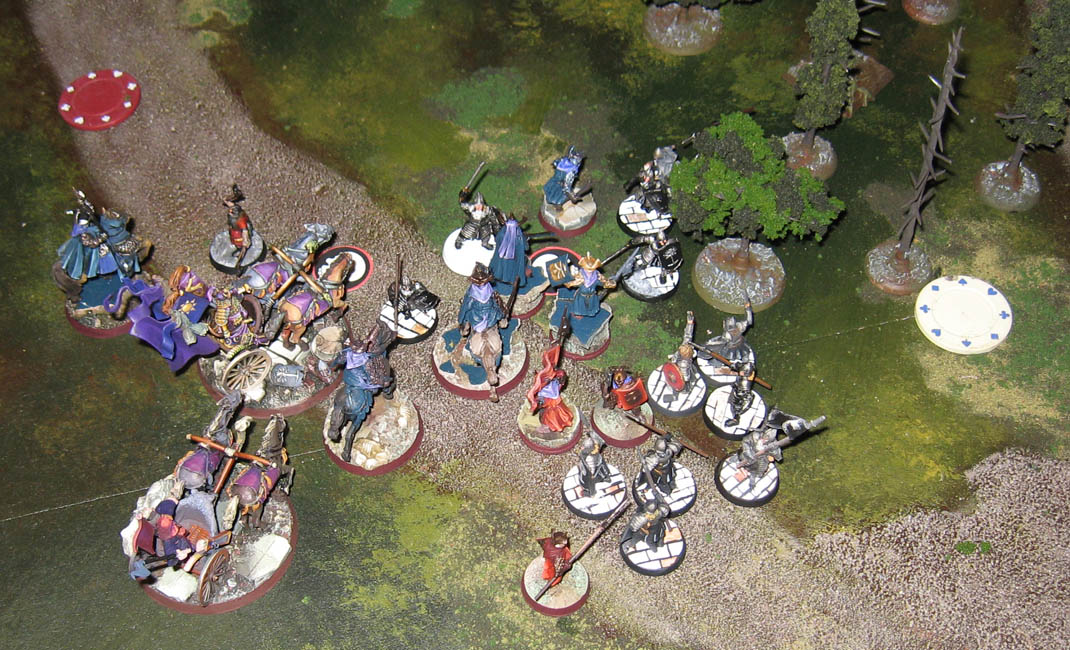 The Gondor knights that went towards my objectives did not fare well.  Even though I had some bad turns trying to kill them, they eventually started to fall, becoming more and more outnumbered and surrounded. 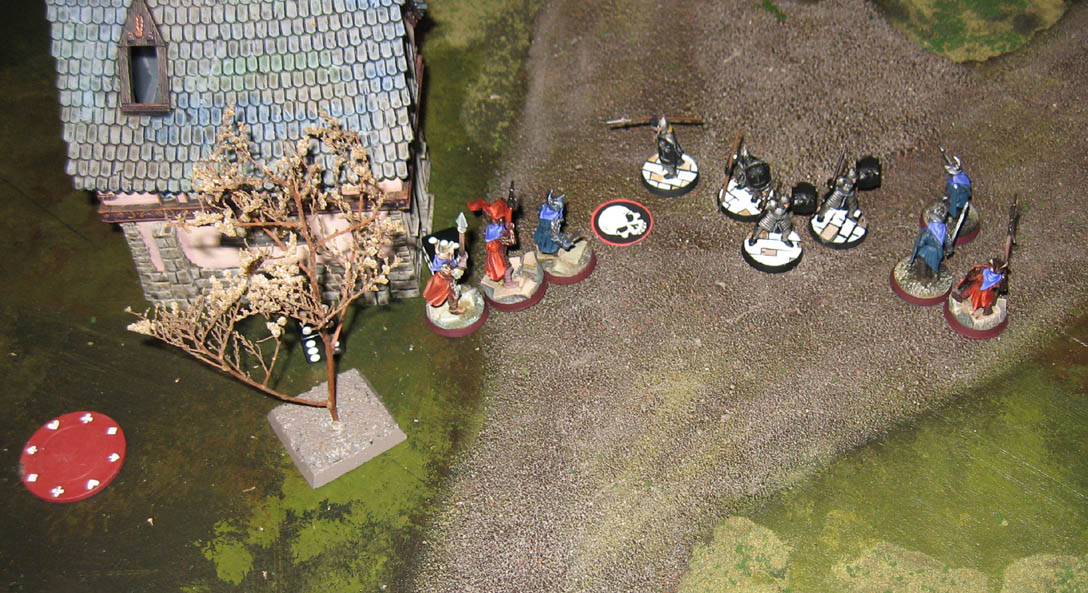 While Gondor was holding out by the crossroads, things were getting worse and worse.  They had used up just about all of their might, Pippen was dead, and there were enough mobile units left for me that could easily run towards the 2 objectives in the Gondor deployment zone.  Gondor was going to be broken this turn, which spelled doom for Boromir and Gimli.

What remained of the Gondor forces would have to be near Boromir to stay around (all the captains were dead), which meant that they could only claim 1 or possibly 2 objectives.  In the meantime, all I needed to do was run to the other 3-4 objectives to get the win, as I would not need the leadership bubbles. 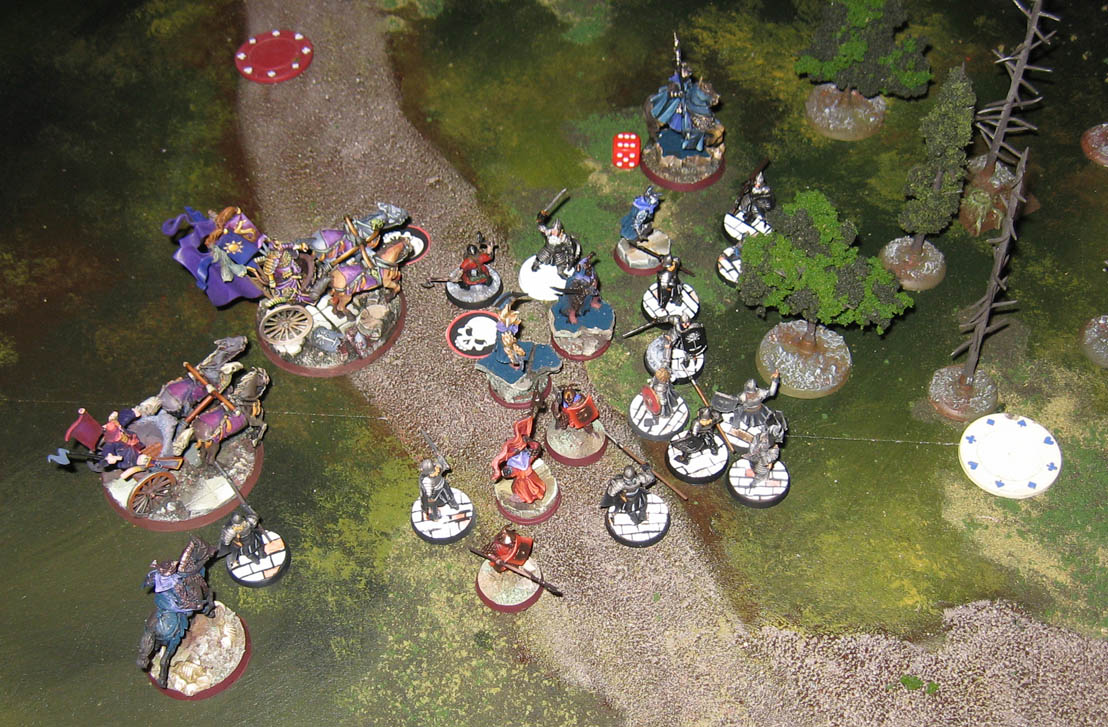 This battle reinforced my doubts about expensive, named heroes in low point games where you are using the official scenarios.  Those characters do a lot of good things, but they can only be in one place, and the scenarios either make you have to be in multiple places, or even keep you off the board for the entire game!  It makes it so much easier for me to avoid any big character on foot, as everything I have moves so fast.

Rich had a lot more fight skill 4 in this game, which is a big reason why the initial combats did not go well for me. He cleverly placed them in front of the lower fight skill spearmen, which I try to do with my own Black Dragons as well.  This makes me worry about what an army of fight skill 5+ elves might do.  I think I will run a test battle of my two armies fighting each other.  Stay tuned!

Afterwards, I tried to get in some work... 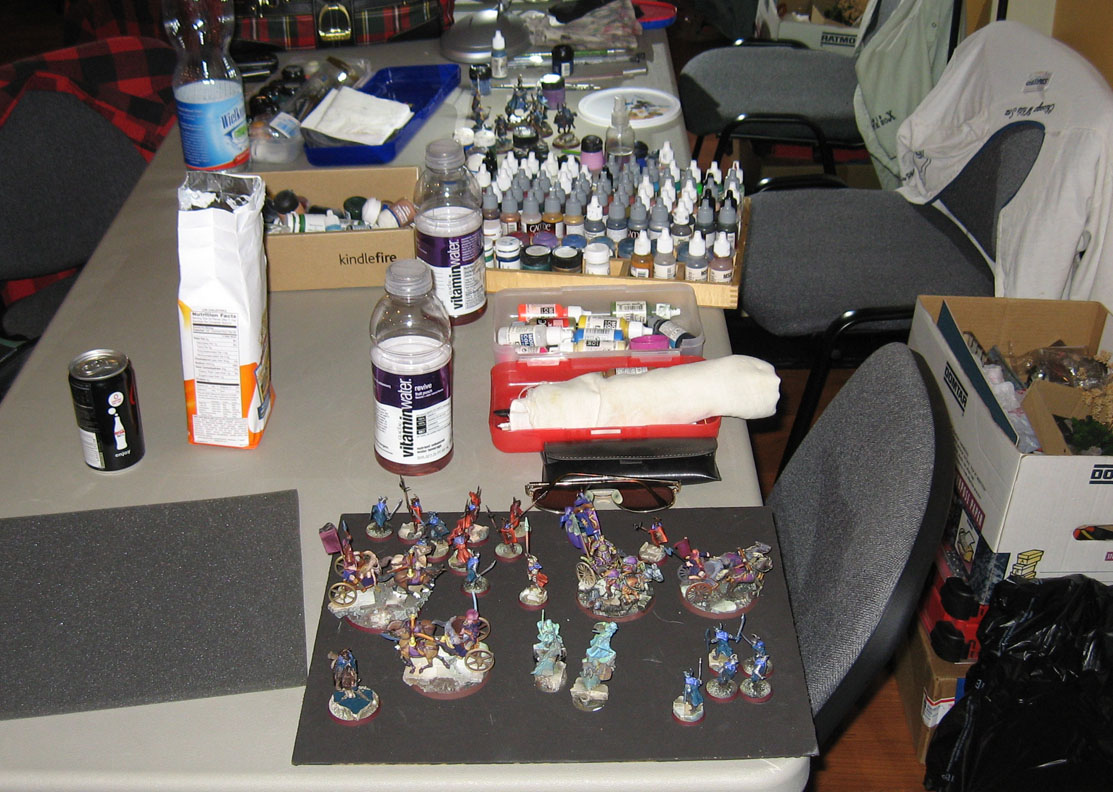 While Cathy joined the Malifaux guys for her first official game!! 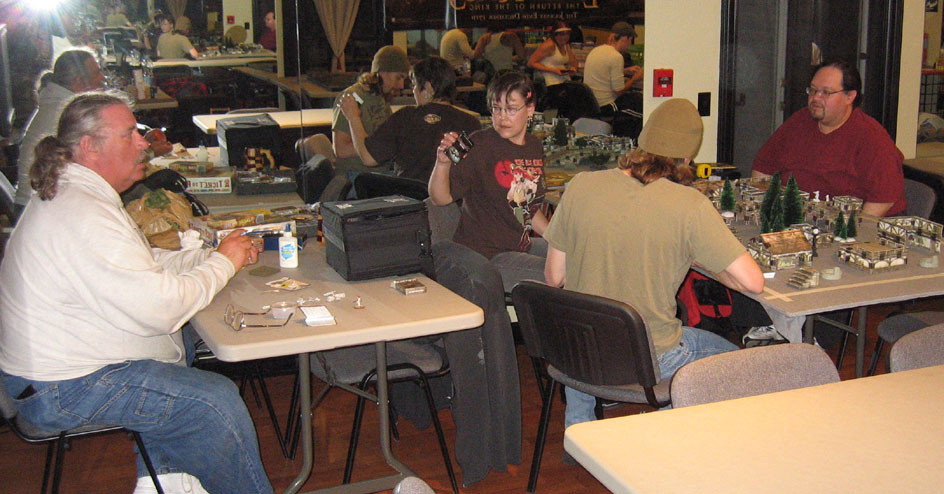 She would prove victorious, capping a glorious day for Team Wappel!! 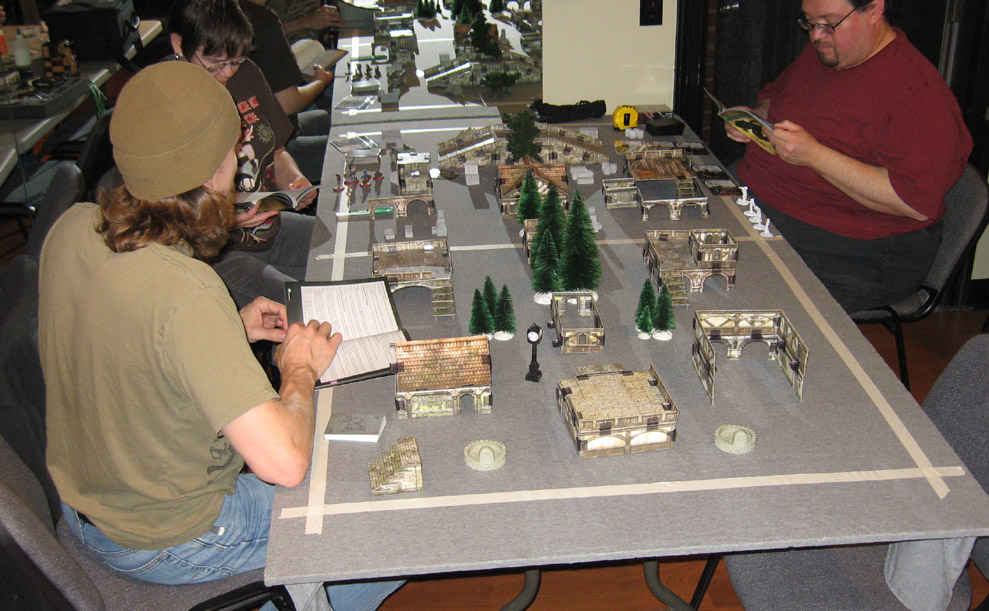